An average day on Earth’s sister planet Venus lasts a staggering 243 Earth days and new research reveals it can vary by up to 20 minutes from one day to the next.

Planetary scientists from the University of California Los Angeles have been repeatedly bouncing a radar signal off the surface of Venus for the past 15 years.

While it was already known that a Venusian day was 243 Earth days, longer than a year on the planet, which is 225 Earth days, the team now find that can vary.

The day length varies by up to 20 minutes, the team discovered, saying it is likely caused by the thick atmosphere, 93 times more massive than Earth’s, exchanging momentum with the solid ground and speeding it up or slowing it down.

A similar phenomenon happens on Earth but the significantly thinner atmosphere means it only adjusts the day length by a millisecond. 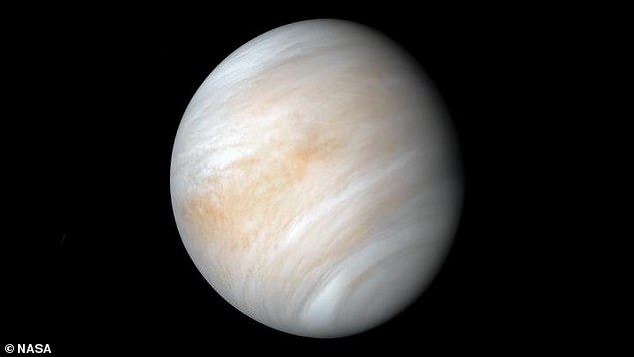 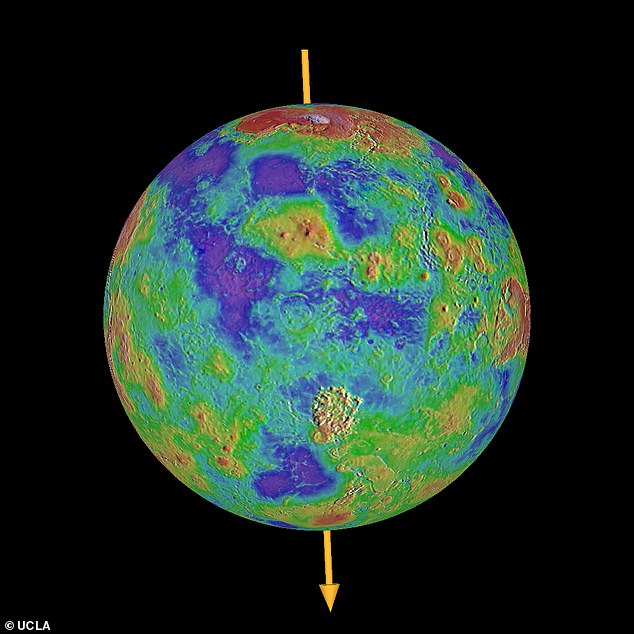 UCLA scientists have learned the glacial rate at which the orientation of Venus’ spin axis changes, moving around the world every 29,000 years

LENGTH OF DAY FOR DIFFERENT PLANETS

Of the planets in the solar system Venus has the longest day, followed by Mercury – measured in Earth hours.

This is a sidereal day, which is the time it takes for a planet to complete a single rotation on its axis.

Venus is an enigma. It’s the planet next door and yet reveals little about itself due to an opaque blanket of clouds smothering a harsh landscape pelted by acid rain.

The team also discovered that the core of Venus has a 2,174 miles radius, similar to Earth’s 2,165 mile radius, but they can’t say if it is solid or liquid.

Study authors say that understanding the size of the core, speed of rotation and exact tilt of the axis will help with planning future landing missions on Venus.

Earth and Venus have a lot in common, they are both rocky planets and both have nearly the same size, mass and density.

However, the two worlds evolved along wildly different paths, with a runaway greenhouse effect on Venus leaving it as the hottest planet in the solar system.

Fundamentals such as how many hours are in a Venusian day provide critical data for understanding the divergent histories of these neighbouring worlds.

‘Venus is our sister planet, and yet these fundamental properties have remained unknown,’ said Professor Jean-Luc Margot, who led the research.

Changes in Venus’ spin and orientation reveal how mass is spread out within the planet, which in turn fuels insight into its original formation, the team said. 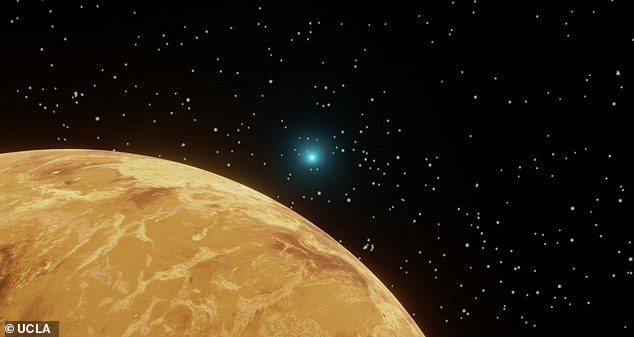 The pings reveal a lot of information about the planet, including its formation, core size and day length, information that can help future landing missions

This then allows them to better understand its volcanic history and how time has altered the surface of the alien world.

Plus, without precise data on how the planet moves, any future landing attempts could be off by as much as 18 miles – which could result in any vehicle falling into a crater or crashing on rocks, rather than landing safely on solid ground.

The new radar measurements show that an average day on Venus lasts 243.0226 Earth days – roughly two-thirds of an Earth year or about 5,832 hours.

While this figure was already widely known, as is the rate of spin for each of the planets in the solar system, there were discrepancies int he exact length.

A value measured at one time will be a bit larger or smaller than a previous value, which ‘probably explains why previous estimates didn’t agree,’ Margot said.

Venus’ heavy atmosphere is likely to blame for the variation, it is about 93 times more massive than the atmosphere on the Earth.

As it sloshes around the planet, it exchanges a lot of momentum with the solid ground, speeding up and slowing down its rotation. 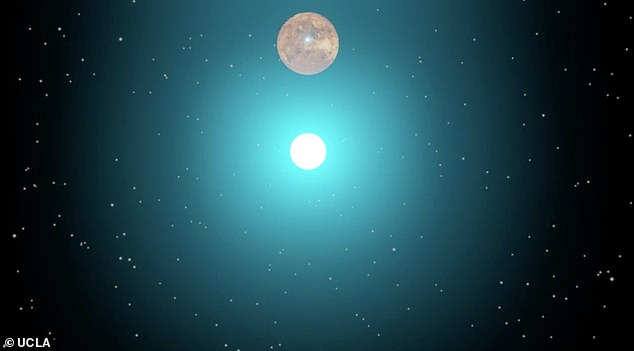 RUSSIAN VENERA MISSIONS TO THE SURFACE OF VENUS

So far the only nation to land on the surface of Venus is the former Soviet Union, with its Venera missions.

Operating between 1961 and 1984, it involved a series of probes designed to gather information on our sister planet.

Ten probes landed on the inhospitable world and 13 entered the Venusian atmosphere.

The probes only lasted between 23 minutes and two hours due to the extreme surface conditions.

Venera 7 was the first probe to make a soft landing on another planet on December 15, 1970.

Venera 9 was the first to send photos from another world, landing in 1975.

This happens on Earth too, but the exchange adds or subtracts just one millisecond from each day, barely noticeable to anything but an atomic clock.

The UCLA-led team also reports that Venus tips to one side by precisely 2.6392 degrees, much less than the Earth’s 23 degree tilt.

This is an improvement on the precision of previous estimates by a factor of 10, according to the study authors.

The repeated radar measurements further revealed the glacial rate at which the orientation of Venus’ spin axis changes.

On Earth, this ‘precession’ of orientation change takes about 26,000 years to cycle around once. Venus needs a little longer at about 29,000 years.

With these exacting measurements of how Venus spins, the team calculated that the planet’s core is about 2,174 miles across, though they can’t say if it is liquid or solid.

On 21 occasions from 2006 to 2020, Margot and his colleagues aimed radio waves at Venus from the 70-meter-wide Goldstone antenna in California’s Mojave Desert.

Several minutes later, those waves bounced off Venus and came back to Earth, with the echo picked up at Goldstone and the Green Bank Observatory in West Virginia. 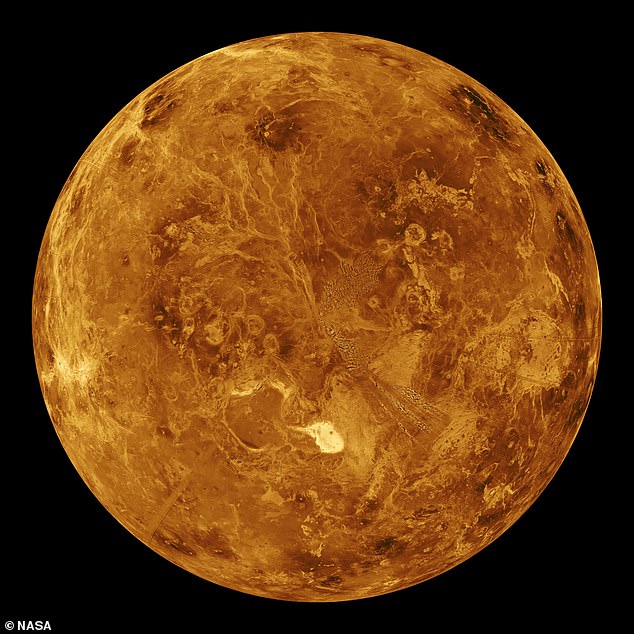 This is a computer simulation showing what the northern hemisphere of Venus looks like, created by NASA scientists

‘We use Venus as a giant disco ball,’ said Margot, with the radio dish acting like a flashlight and the planet’s landscape like millions of tiny reflectors.

‘We illuminate it with an extremely powerful flashlight — about 100,000 times brighter than your typical flashlight. And if we track the reflections from the disco ball, we can infer properties about the spin [state].’

The complex reflections erratically brighten and dim the return signal, which sweeps across Earth. The Goldstone antenna sees the echo first, then Green Bank sees it roughly 20 seconds later.

The exact delay between receipt at the two facilities provides a snapshot of how quickly Venus is spinning, while the particular window of time in which the echoes are most similar reveals the planet’s tilt.

This is an image of the surface of Venus, captured by the Soviet-era probe Venera 13 in 1982

Venus and Earth are remarkably similar in size but their histories differ.

The second planet from the Sun sits in the inner edge of the habitable zone, in fact scientists believe it may have been habitable 700 million years ago.

A single day on the inhospitable world is 243 Earth days, compared to the 24 hours on Earth.

It is a terrestrial planet similar in size, mass proximity to the sun and bulk composition as the Earth.

However, it has the densest atmosphere of the terrestrial planets, made up of 96% carbon dioxide and a pressure at the surface 92 times greater than Earth.

It has the hottest surface of any planet in the solar system with a mean temperature of 867 degrees Fahrenheit.

Its clouds are made of sulfuric acid, with acid rain falling to the hot surface.

It may have had oceans in the past, but the water would have been vaporised as temperatures rose due to a runaway greenhouse effect.

The observations required exquisite timing to ensure that Venus and Earth were properly positioned. And both observatories had to be working perfectly.

‘We found that it’s actually challenging to get everything to work just right in a 30-second period,’ Margot said. ‘Most of the time, we get some data. But it’s unusual that we get all the data that we’re hoping to get.’

Despite the challenges, the team is forging ahead and has turned its sights on Jupiter’s moons Europa and Ganymede.

Many researchers strongly suspect that Europa, in particular, hides a liquid water ocean beneath a thick shell of ice. Ground-based radar measurements could fortify the case for an ocean and reveal the thickness of the ice shell.

And the team will continue bouncing radar off of Venus. With each radio echo, the veil over Venus lifts a little bit more, bringing our sister planet into ever sharper view.

This could help future scientists and engineers plan a landing mission to our sister planet to better understand how it came to be so inhospitable.

So far only the former Soviet Union have landed on Earth’s sister planet, with Venera 7 the first soft landing in 1972 but returning very limited data.

The last landing mission was Vanera 14 in 1981, although the Vega 1 and 2 missions in 1984 also included a lander component but were mainly an atmospheric probe. 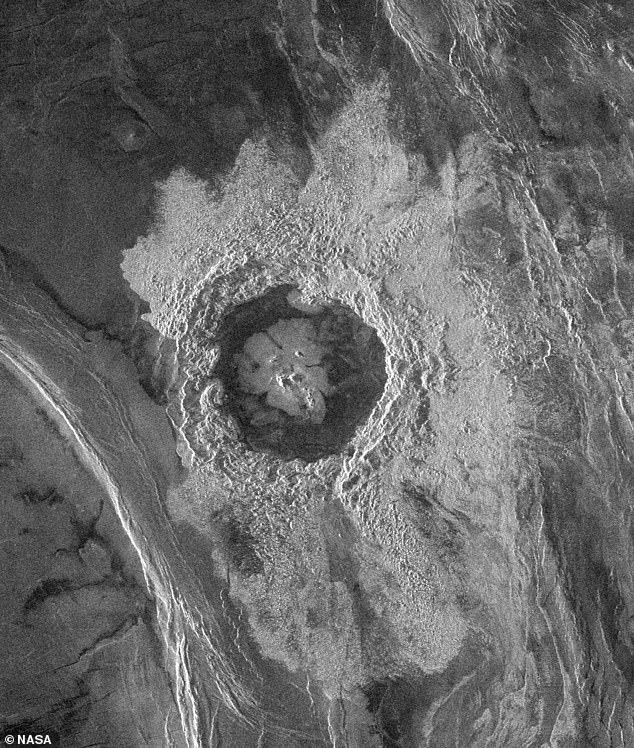 This is an impact crater on the surface of Venus, captured by the NASA Magellan mission in 1996

There are a number of Venus missions under development by various space agencies, most to orbit the planet or probe the atmosphere.

Three have already been rejected by NASA, VICI, VISAGE and VISE, although they could come back in the future.

Some studies have suggested that as recently as 750 million years ago Venus could have had liquid water and conditions suitable for life to develop.

However, due to the intense pressure from the thick atmosphere, very little analysis has been done of the surface of the planet as spacecraft don’t survive long.

The US space agency is working on a rover, named Zephyr, that would last up to 50 Earth days and be powered by wind as it explores the boiling surface.

The findings are published in the journal Nature Astronomy.

The atmosphere has many layers with different temperatures.

At the level where the clouds are, about 30 miles (50 km) up from the surface, it’s about the same temperature as on the surface of the Earth.

As Venus moves forward in its solar orbit while slowly rotating backwards on its axis, the top level of clouds zips around the planet every four Earth days.

They are driven by hurricane-force winds travelling at about 224 miles (360 km) per hour.

Speeds within the clouds decrease with cloud height, and at the surface are estimated to be just a few miles (km) per hour.

On the ground, it would look like a very hazy, overcast day on Earth and the atmosphere is so heavy it would feel like you were one mile (1.6km) deep underwater.

The anonymous victim experienced being dead for a few moments which lasted what felt like an eternity. The victim revealed on Reddit […] 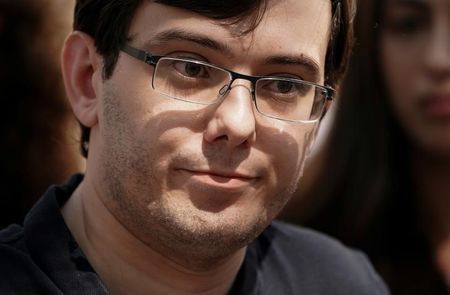 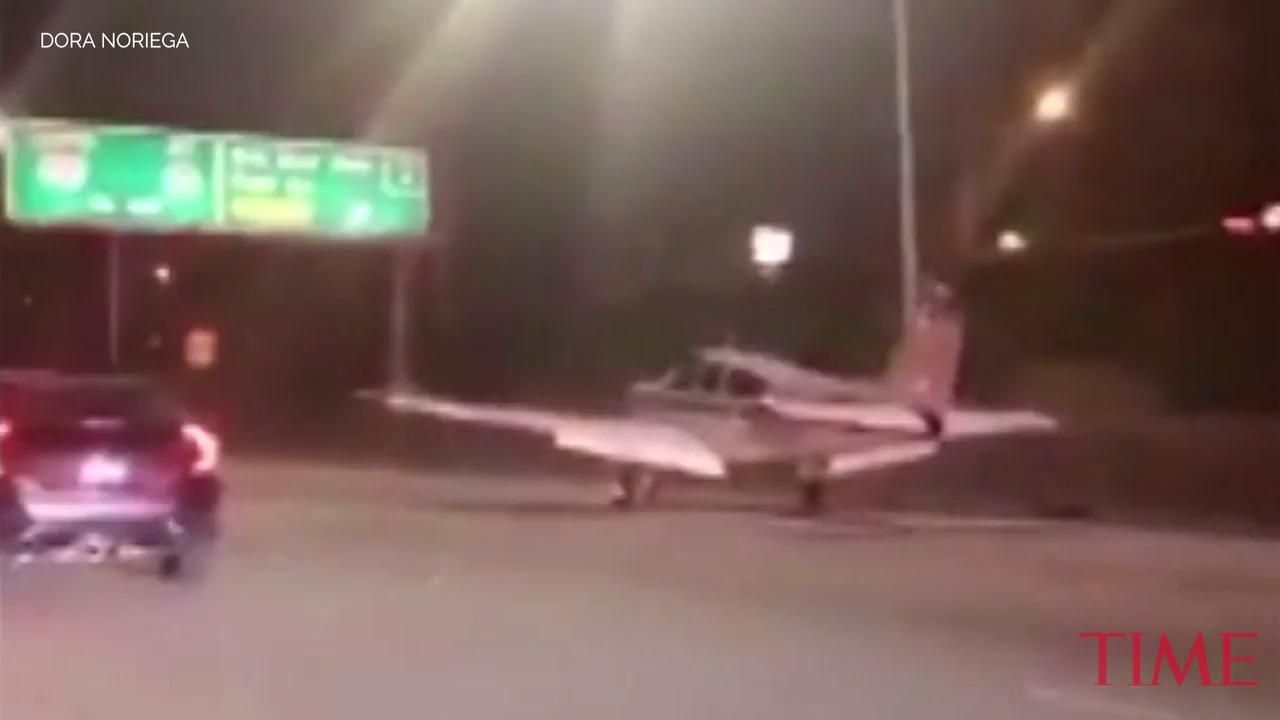 COSTA MESA, Calif. (AP) — Officials say a small plane has made a nighttime emergency landing on a freeway south of Los […] 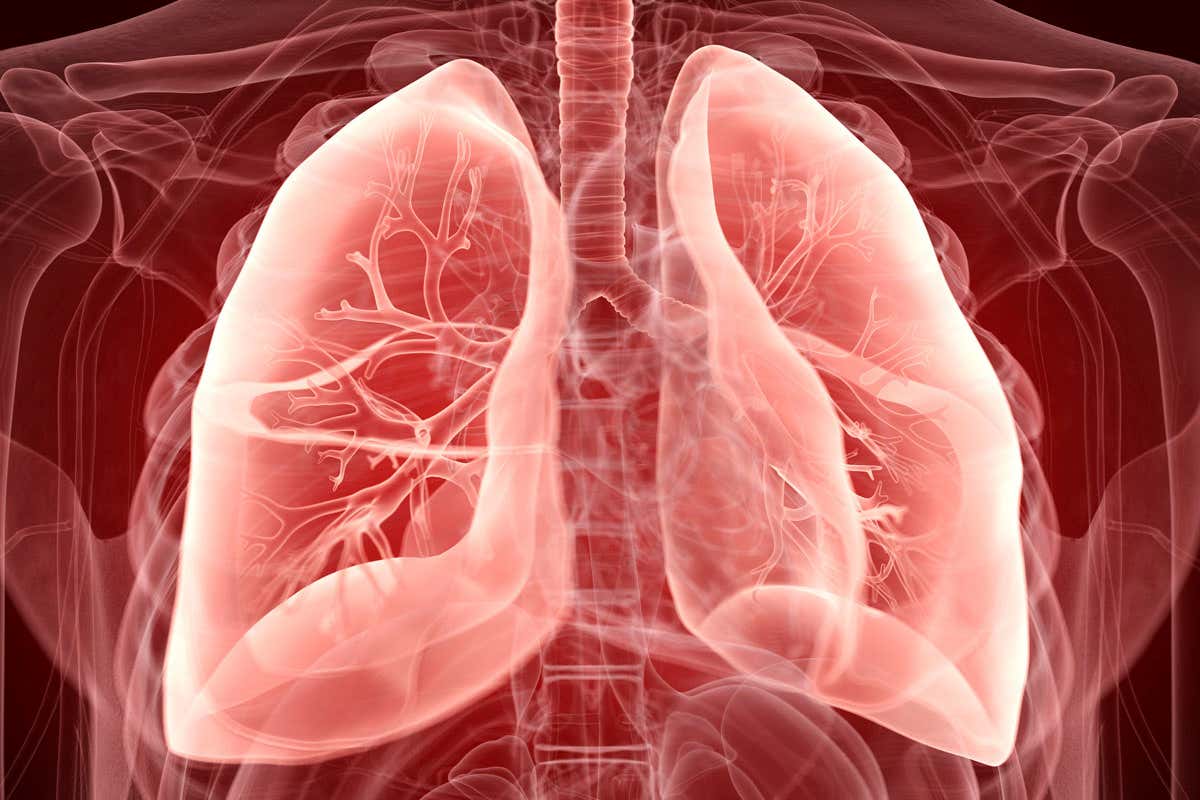