Well, that de-escalated quickly. On a night of thrilling, see-sawing fortunes something strange happened at the Parc des Princes. For 30 first-half minutes Paris Saint-Germain threatened to swagger their way through an oddly fearful and muddled Manchester City team.

At which point PSG simply collapsed like an over-inflated macaron in the face of a brilliantly assertive second half showing from a rejigged City – led by an alpha-dog performance from Kevin De Bruyne in central, right, left midfield, and pretty much every other position on the pitch.

This 2-1 away win was a triumph also for Pep Guardiola, who did that thing here he’s not meant to do. The idea Guardiola overthinks these occasions has become so well-worn it is hard to drill down beyond its outer layers and find the truth. All managers over, under or simply think football matches. That’s the job. It involves thinking, both successfully and unsuccessfully. Still though, Guardiola has a history of flinching a little too much on these occasions.

And early on he seemed to have made the mistake of clipping his team’s wings, urging caution on his full-backs in the face of PSG’s fearful horsepower on the flanks, and leaving a team that is geared to occupy those positions without its outlet, its favourite passing rhythms.

Guardiola had picked his simplest, strongest team. Happily this meant going full Pep, with no orthodox striker, but with the familiar bounty of nimble-footed midfielders. Still, though, something was off here.

Paris pressed hard, suffocating the spaces for City’s dainty, pirouetting inside-forwards. Worse, the full-backs had been pinned back. There was none of the usual overloading bravado, the constant laps of the outside lane.

This presented a kind of identity crisis. The full-back is the basic unit of Pep-ness. This is his compass, his scalpel, his favourite tool. Take away the overlapping full-back and suddenly City looked tongue-tied and forgetful, a team wandering around with its glasses on its forehead trying to remember what it was looking for. Neymar was sublime in those moments. There was a pinged, stunned, back-spun pass. There was a ludicrous playground-style dribble, moving like a pond-skater. At times like these Neymar seems to move with a kind of light around him, working on insect-time, able to see space, angles, movement that much quicker than every other person on the pitch.

On 15 minutes PSG took the lead. Ángel Di María’s corner from the right was a horrible, swerving howling thing. Marquinhos made a run across the front and wrenched his neck to flick the ball back across into the corner.

For a while there was the extraordinary sight of this City team being given a chasing, being punked, merked, debagged, as the navy shirts swerved and flicked and swaggered about in easy little triangles. By half-time City were breathing heavily. Two things happened to turn the game on its head. First, Guardiola went back to his own first principles. Basically he decided to play a bit more like Manchester City.

Was this Pep under-thinking the game to countermand the overthinking? Was he de-thinking it? Either way the full-backs began to play, wings unclipped, given the oxygen to do what they normally do. João Cancelo in particular became a sword instead of a shield, allowed to occupy that outside-right position until he left the pitch after an hour, in response to a first-half yellow card.

Secondly De Bruyne decided to pull himself up to his full height and assert his own champion qualities, his brilliance even in this rarefied air. De Bruyne was utterly commanding when it mattered most, all driving runs, prompts, dribbles, clever diagonal passes.

He even scored the equaliser. It was both a lucky goal, and also a reward for skill, accuracy and devilment on the ball. He took the ball on the left. He looked up and played that pass: you know the one, the diagonal dipping cross, a malevolent thing that entered Paris airspace on that difficult line and length where you’re never quite sure whether to play.

Navas stayed and watched, fearing a flicked header in front of him. The ball curled gently into the corner of the net. De Bruyne didn’t mean it. He kind of meant it. Let’s say he didn’t not mean it.

In the space of one Parisian lull, one switch of the full-backs’ starting position, City had gone from being dominated to a position of steamrollering ascent. Neymar vanished completely from this earthly plane.

And on 71 minutes 1-0 down became 2-1 up. Phil Foden had a hand in this one, bundled over after a sniping run. The wall was of unsound construction. Riyad Mahrez was able to spank the ball through a hole with enough power to bulge the net low down to Keylor Navas’s left.

Kyle Walker, the less feted full-back, also had a dominant second half. He helped make the second goal with one of those thrilling, bullocking sprints, haring to the corner flag with the adrenal abandon of a man fleeing a burning skyscraper. And by now PSG had lost their sang froid.

Idrissa Gueye was sent off on 77 minutes for a horrifically bone-headed lunge at the ankle of Ilkay Gündogan.

There had been something endearing, but deeply unconvincing about Guardiola’s cool-dad schtick before the game, the insistence that City would enjoy the day, chill, relax. But oddly this was what happened here, a thrilling away win borne out of hanging it all and going back to first principles. 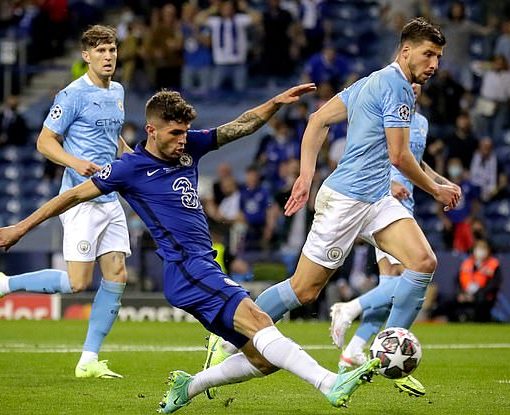 Football can be an exhausting business, a sport that carries as many reasons to hate as to love it. But then something […]