Raphael Varane has reportedly accepted that his time at Real Madrid is coming to an end, ahead of a potential huge summer transfer exit from the Bernabeu.

Varane, 28, has been a mainstay in the Madrid defence since breaking through following a move from Lens in 2011, and quickly rose to the summit of world football with his standing.

Now, however, reports in Spain claim that Varane has been left angered by Madrid’s apparent lack of effort to retain his services, given his contract is due to expire next summer. 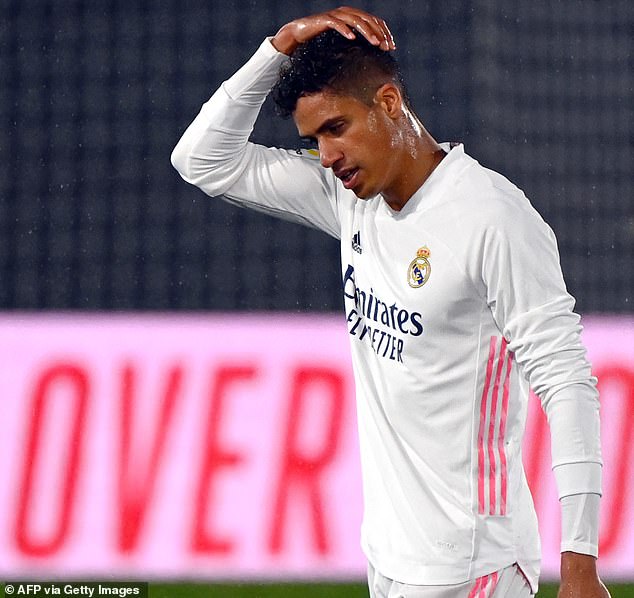 Raphael Varane is closer to leaving Real Madrid this summer, with a move to England tipped

Spanish publication AS report that Madrid are ready to cash in on the £60million-rated star, with the arrival of David Alaba from Bayern Munich on a free transfer penciled in for the summer.

AS claim Varane ‘has already told trusted people that his cycle is over and that he wants to face new challenges away from the Santiago Bernabeu.’

The World Cup winner is also said to be of the opinion that it is the ideal time to move on given his contract ends in 2022 and Madrid will have to sell him this summer if they are to get a sizable return. 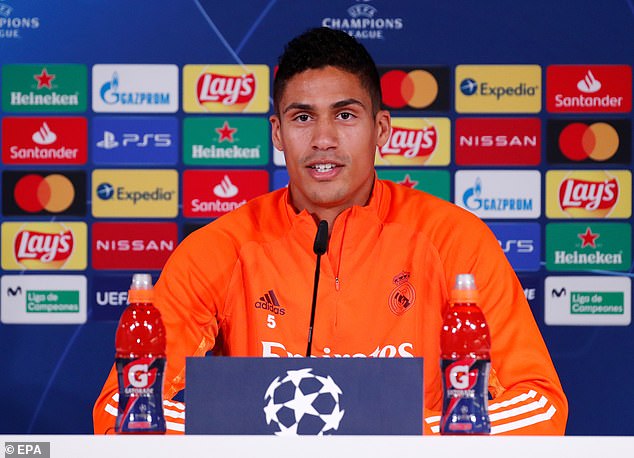 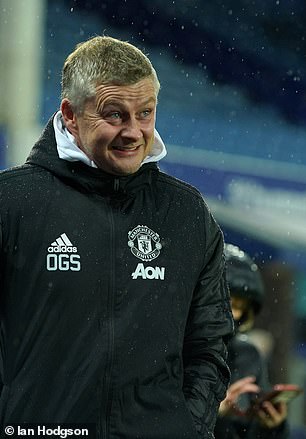 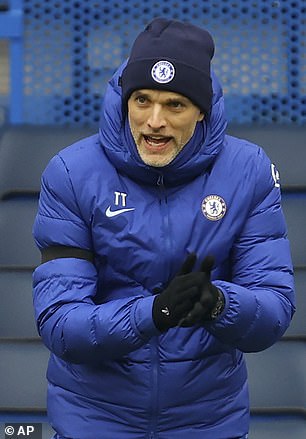 Madrid are also expected to make a move for Villarreal’s highly rated Spain international Pau Torres, and already have Eder Militao on their books for the future.

News of Varane’s unrest has set a host of Premier League giants on red alert, namely Manchester United and Chelsea.

The two teams are in the market for defensive reinforcements this summer, with Ole Gunnar Solskajer said to be on the lookout for a new long-term partner for Harry Maguire.

Meanwhile, at Stamford Bridge, new boss Thomas Tuchel is understood to be keen to fill out his defensive options, while remaining mindful of the age of veteran star Thiago Silva, who will be 37 in September.

Chelsea will get to see Varane up close and personal this week, as they face Madrid in the semi-finals of the Champions League on Tuesday evening.

Speaking to reporters this week as part of Madrid’s pre-match press conference, Varane’s mindset was telling in his refusal to commit to the Spanish capital long term. He said: ‘I am focused on giving everything in this season finale. 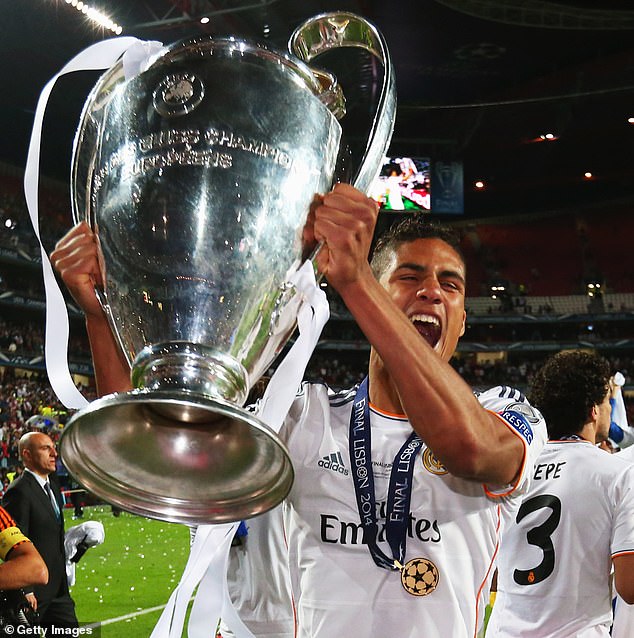 Varane, pictured with the Champions League trophy in 2014, has won a host of silverware in his ten years at Madrid, but is said to have told close friends his ‘cycle is over’

‘My future is clear: my focus is on the end of the season.

‘We are in a very intense minute, we have to be focused on the games that lie ahead.’

Pressed on whether he would extend his contract beyond the end of next season, the defender added: ‘It is normal that my focus is on the end of the season.

‘The message to the fans is that I am 100 per cent committed to the team. We have challenges that encourage us a lot. I am focused on giving everything on the field.

Madrid are understood to value Varane in the region of £60m, and are set to embark on something of a fire sale this summer as they bid to raise huge funds for future signings.

Both Kylian Mbappe and Eduardo Camavinga remain high on Madrid’s list of priorities, with both youngsters set to command exorbitant fees. 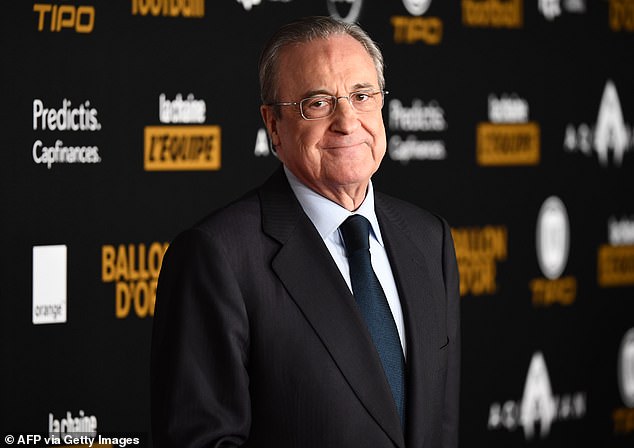 Madrid’s finances have been badly hampered by the pandemic, which has been one of the driving factors behind president Florentino Perez’s insistence to form a Super League

Madrid are one of Europe’s leading sides who have been hit hardest by the coronavirus pandemic in terms of finances, after missing out on millions through commercial revenue.

The club’s financial status is said to have been on of the driving factors behind president Florentino Perez’s determination to form the European Super League – which now lies in ruins after almost all of the 12 ‘founding members’ pulled out.

This week Perez doubled down with his insistence to form a Super League, despite each of the six English super powers having distanced themselves from the project. 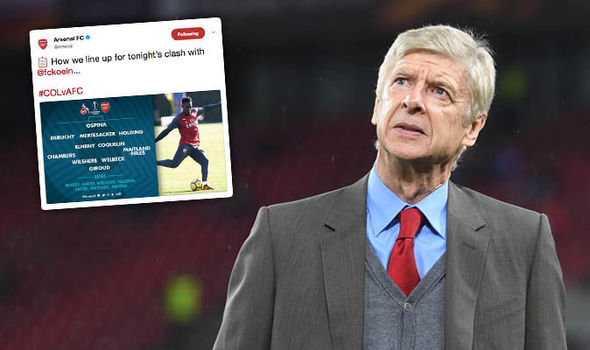 Wenger has made 11 changes from the 2-0 win over Tottenham last weekend, swapping out his entire team with knockout qualification already […] 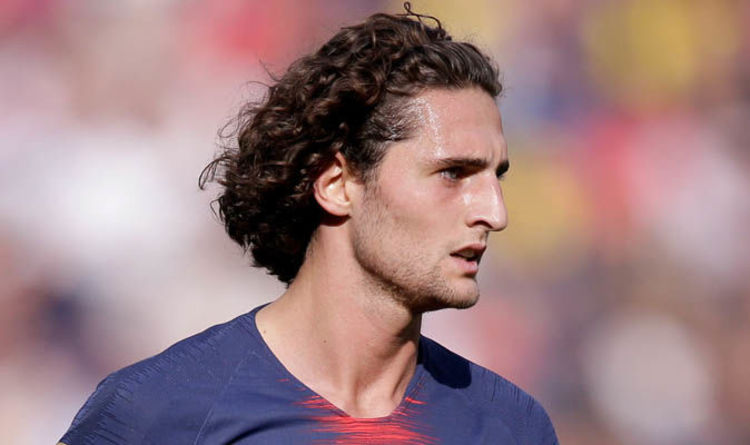 Liverpool have emerged as frontrunners in the race to sign Rabiot amid uncertainty over his PSG future. The France international, who missed […]

Michael Appleton, the Lincoln manager, was proud of his players after they seized the initiative in first leg of their League One […]