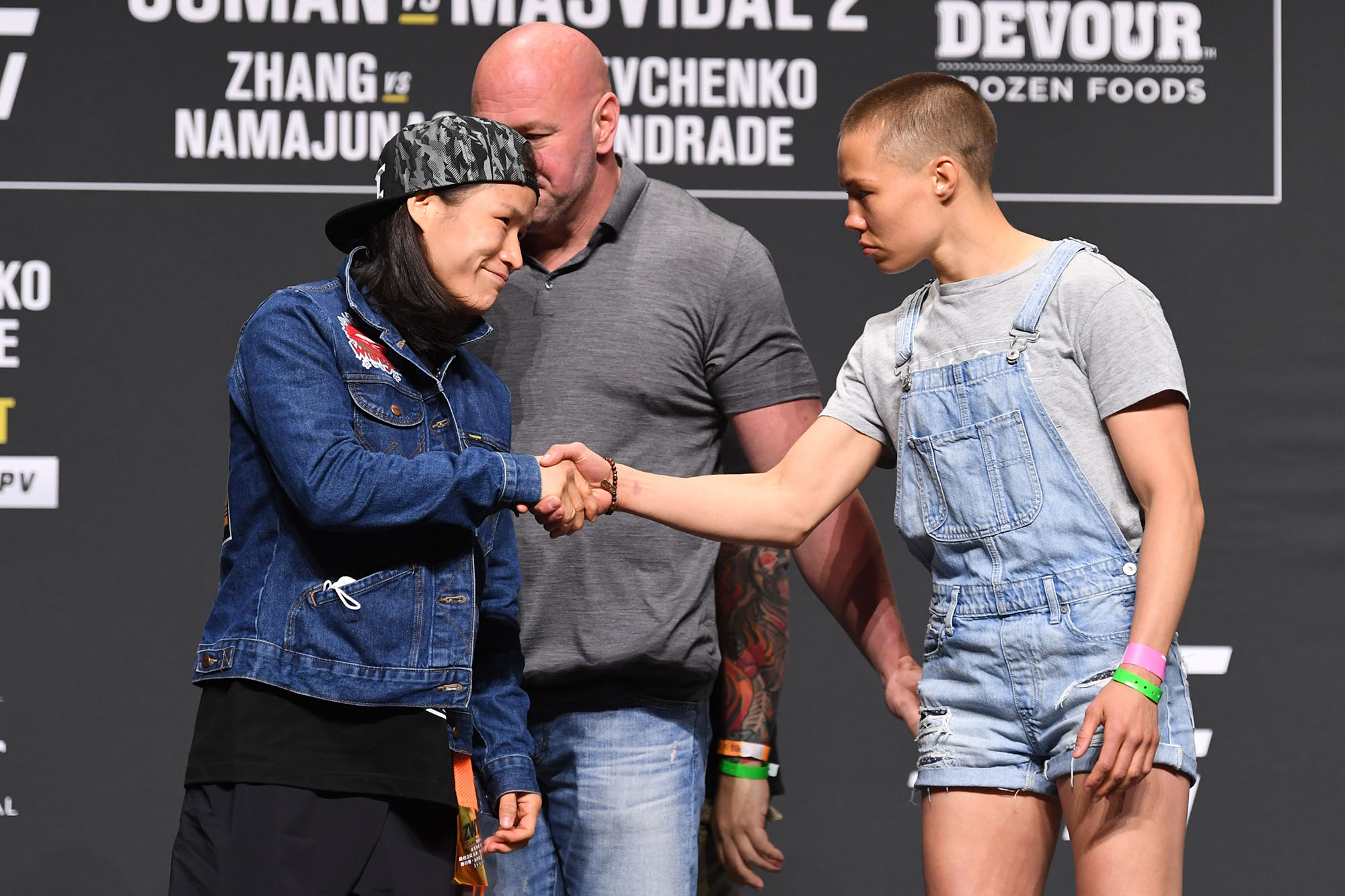 The last two times Rose Namajunas competed in the octagon, Jessica Andrade stood in front of her.

Though they’re both back in action for UFC 261 on Saturday at Vystar Veterans Memorial Arena in Jacksonville, Fla., they will be squaring off in separate championship fights: Namajunas at strawweight against Zhang Weili and Andrade up a division at flyweight, facing Valentina Shevchenko. A third championship bout, welterweight champ Kamaru Usman against Jorge Masvidal, takes top billing on pay-per-view.

Make no mistake, though. Andrade may have been her only opponent of the past two years, but champion Zhang has been on Namajunas’ radar since August 2019. That’s when Andrade, who had won the belt three months earlier via second-round slam KO, suffered a first-round, 42-second TKO defeat at the hands of China’s first UFC titleholder.

“It is [a] fresh [opponent], but I have been having my eyes set on Weili for a really long time now, so it’s not as fresh as maybe you would think,” Namajunas told The Post over the phone Wednesday. “I’ve been training for this fight specifically for six months. But ever since she beat Andrade, I’ve had my eyes set on her.”

Before the two Andrade fights — Namajunas (9-4, six finishes) won the most recent one via split decision last July 12 — this weekend’s 115-pound challenger had swept a pair of fights in New York against the division’s most dominant champion to date, Joanna Jedrzejczyk. The first, in November 2017, saw Namajunas earn a stunning victory to swipe the Polish striker’s title by first-round TKO at Madison Square Garden. The rematch in April 2018 went five full rounds at Barclays Center, but again Namajunas left with gold around her waist.

Zhang’s (21-1, 17 finishes) first title defense also came against Jedrzejczyk last March in front of a packed arena in Las Vegas — the last time the UFC had hosted a full crowd before the coronavirus pandemic altered the sport sports landscape; this weekend’s event will host a capacity crowd for the first time. That fight stole the show and stands as one of the most thrilling fights in UFC history, regardless of gender. Both women traded blows at a rapid pace for 25 minutes, with Zhang claiming a split decision victory.

“She really showed lots of heart and determination, and she proved herself as a legit champion,” Namajunas said of Zhang. “Somebody that can beat Joanna is definitely somebody to be respected.”

Namajunas sees a little of herself in what the well-rounded Zhang brings to the octagon, noting that both women like to outdo opponents “at their own game.” The two both turned pro in 2013: Namajunas at age 20 and Zhang at 24.

Now 28 and 31, respectively, the two are still squarely in their primes and, ostensibly, growing as fighters. In particular for this fight, Namajunas highlighted improvements to her approach such as discipline, consistency and her “ability to maintain gratitude and [a] positive attitude.”

“And just physically, I’ve also put on some muscle mass and some skill, as well,” Namajunas said.

As much as there is clear respect for Zhang as a fighter, comments Namajunas made regarding her opponent living under the rule of the Chinese Communist Party have been at the heart of the buildup to their strawweight title showdown. Namajunas set off a firestorm when speaking to LRT in Lithuania, the country from which her family immigrated to the United States. She invoked the “better dead than red” slogan and saying that “Weili is red; that’s what she represents.”

Namajunas has stopped short of taking back the comments, instead attempting to contextualize how Soviet rule in Lithuania devastated her ancestors and emphasizing repeatedly that there is “nothing personal against [Zhang] or her culture.” She also speculated that Zhang, who thus far has not used her platform as UFC champion to spread her personal politics or those of China, “may be being told what to say” and is unable to criticize her government.

Zhang’s public comments in reaction have attempted to take the high road, even extending to Namajunas an invitation to visit China. In response to that offer, Namajunas told The Post that she would be interested in such a visit, with one caveat: “if I thought it was genuine.” She also made a counter-proposal. 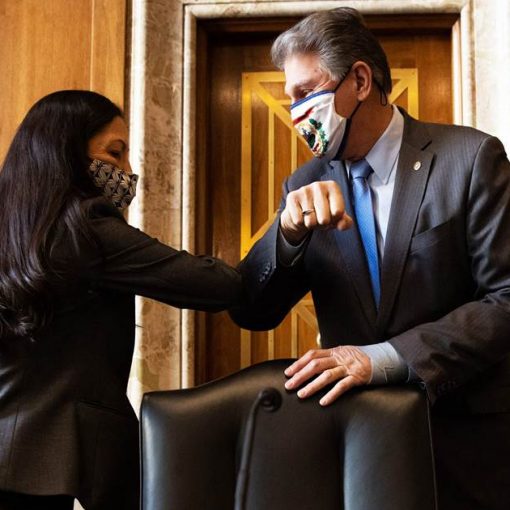 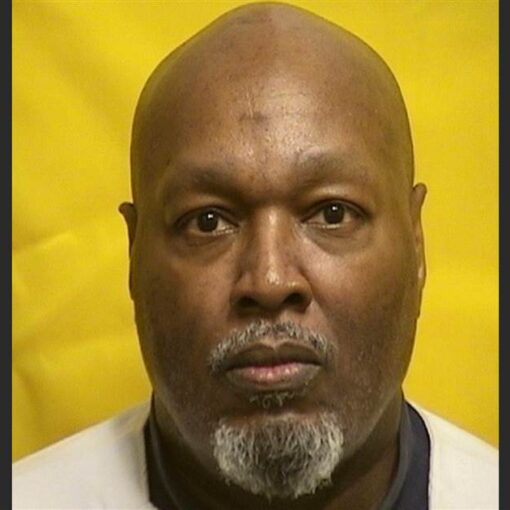 A condemned Ohio inmate, who survived an executioner’s needle more than a decade ago, has died — probably from complications of Covid-19, […] 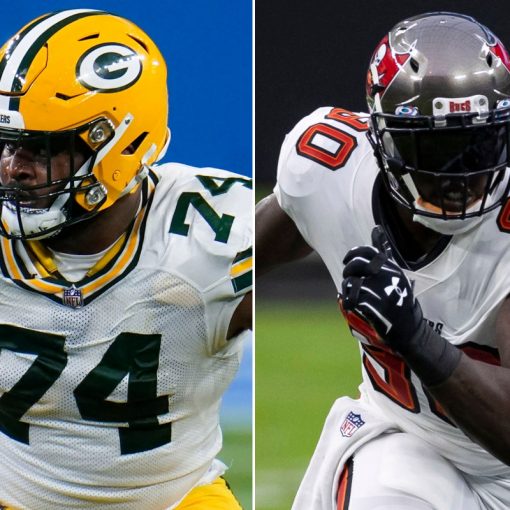 Paul’s pick Legendary quarterbacks meet, and only one gets to advance. History says pick Tom Brady over Aaron Rodgers in a big […]