Thousands of villagers in India have been filmed hurling cow dung at each-other as part of an annual festival to mark the New Year.

The celebration, known as pidakala samara, took place in the village of Kairuppala, in Andhra Pradesh, on Wednesday – the day after lunar new year celebrations.

It marks a mythological marriage dispute between two deities which was resolved by village elders, according to legend, and villagers believe that re-enacting the dispute and its peaceful conclusion each year will bring peace, health and prosperity.

The packed event was allowed to go ahead despite India’s soaring Covid infection rate which saw the country today report more than 200,000 cases for the first time and more than 1,000 deaths for the second day in a row. 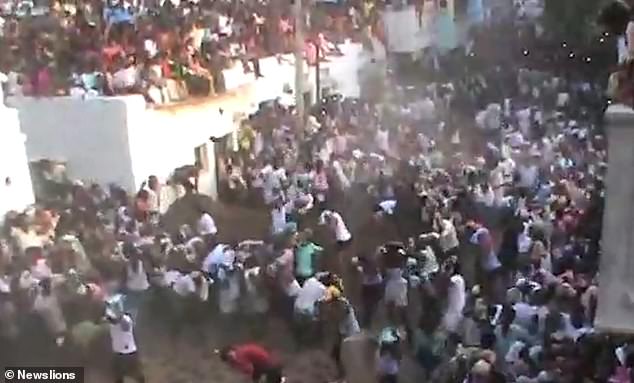 Thousands of villagers gathered in Kairuppala, a village in southern India, on Wednesday to take part in an annual festival where participants pelt each-other with cow dung (pictured) 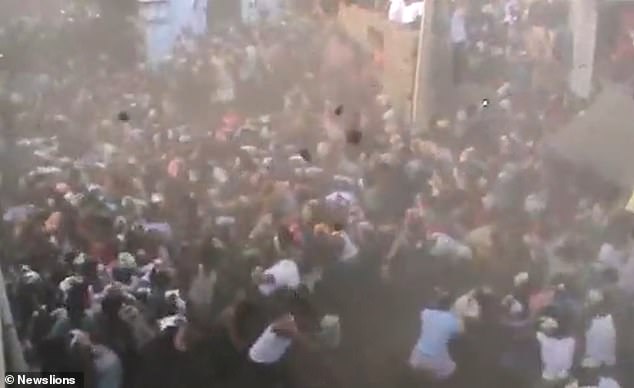 The festival, which is supposed to guarantee peace, good health and prosperity, was allowed to go ahead despite India’s soaring Covid second wave 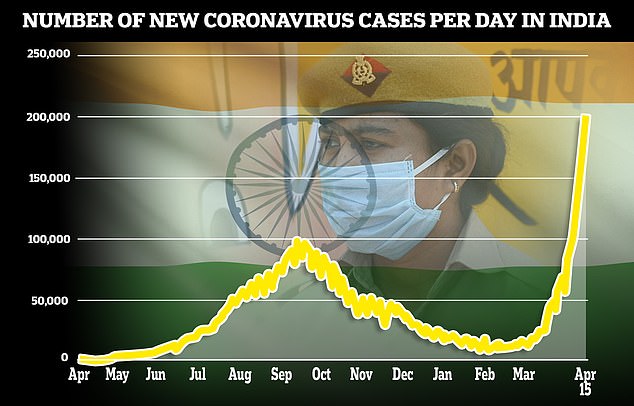 India reported 200,739 new cases of Covid on Thursday amid a rapidly-spreading second wave of Covid that doctors fear is being driven by a new mutation

Dr Shashank Joshi, who is leading India’s Covid response in hardest-hit city of Mumbai, described the soaring infections as a ‘tsunami’ that has caught the government completely unawares.

The health system is already close to be overwhelmed, he said, with hospitals pleading for supplies of key medicines including oxygen to keep patients alive.

Dr Joshi told The Guardian that the second wave is affecting both young and old, with even children – previously spared the worst affects of Covid – now being brought into hospital with severe infections.

It comes just two months after the government was toasting its own success in fighting Covid as cases and deaths appeared to be in decline – though medics warned at the time that patchy testing meant many were being missed.

While the new surge has not been fully explained, medics theorise that it could be down to a new variant of the disease which is both more infectious and more deadly.

Similar virus mutations in the UK, Brazil and South Africa sent cases and deaths soaring in those countries and forced governments to take tougher measures to combat the infections.

India has been slow to respond to the spike, with Maharashtra state – the worst-hit – the only one so-far ordered into lockdown, which began yesterday.

For the next 15 days only essential services will be allowed to operate, Chief Minister Uddhav Thackeray said, while gatherings have been limited to four people and non-essential use of public transport outlawed. 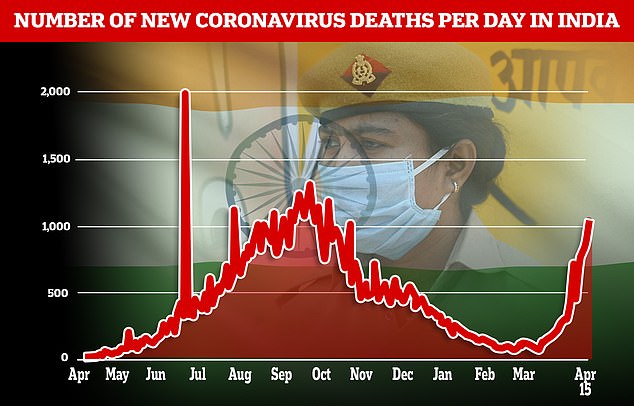 Deaths are also beginning to spike and have remained above 1,000 for two days in a row, with medics fearful that they are fighting a more-deadly version of the disease 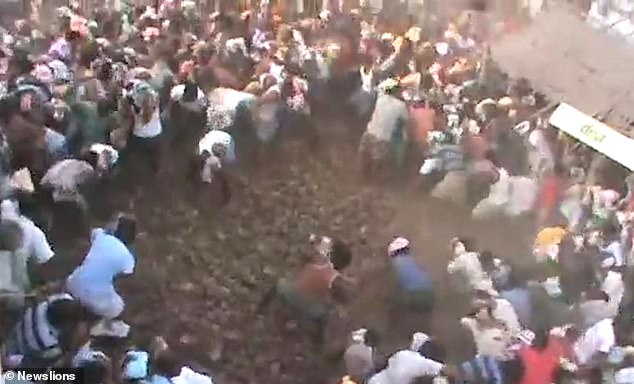 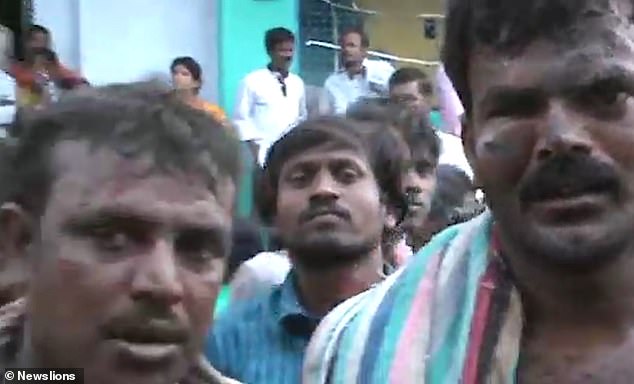 Police said 100 people were injured during the fight (pictured, men with bruised faces) though none of them was seriously hurt

But mass gatherings have continued elsewhere unabated, with thousands of Hindu devotees gathering to pray on the banks of the Ganges earlier this week during the festival of Kumbh Mela.

And in Andhra Pradesh, New Year celebrations such as pidakala samara have been allowed to go ahead with no sign of social distancing or mask wearing.

The festival traces its origins back to a mythological marriage between two deities of different castes who wished to marry, sparking a war between people of the village.

Village elders eventually resolved the dispute and the marriage was solemnised, restoring peace to Kairuppa.

Each year, the village is divided along religious and caste lines and each side lines up to hurl cow dung cakes – which are made a month ahead of time – at the other.

After the fight is over, processions are led out and village elders ritually bless the marriage of Lord Veerabhadra Swamy and Kalika Devi which is thought to bring peace, health and prosperity to the village.

Police said 100 people were injured in this year’s celebrations, though none were seriously hurt.

Other traditional New Year celebrations in Andhra Pradesh state include leading donkeys through a pond of sludge that is poured around a temple, before washing and adorning the animals, which are then worshipped.

In total, India has reported more than 14million cases of Covid – the world’s second-highest total after the US.

The country has also recorded 173,000 deaths, the fourth highest total in the world, though experts warn that is almost certainly a gross underestimate.

It is thought that just 20 per cent of deaths in India are medically registered with an official cause of death given, with experts saying the true death toll could be two or three times the official figure. 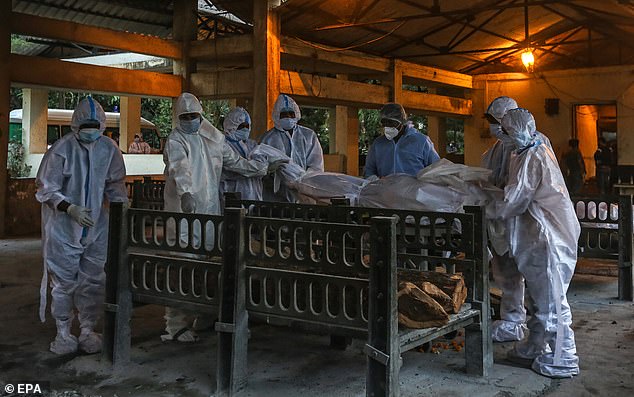 Indian medical workers in the city of Mumbai, which has been hardest-hit by the Covid second wave, prepare a body for cremation on Tuesday 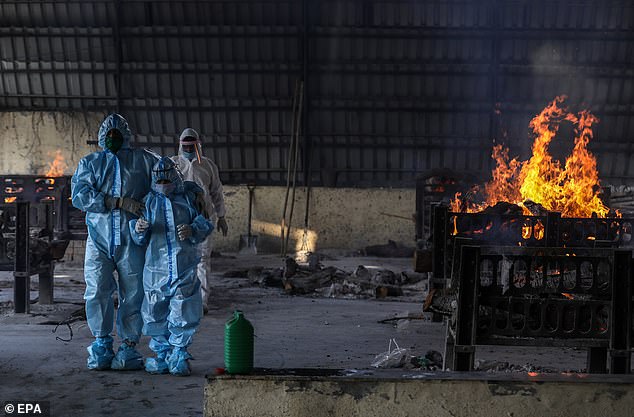 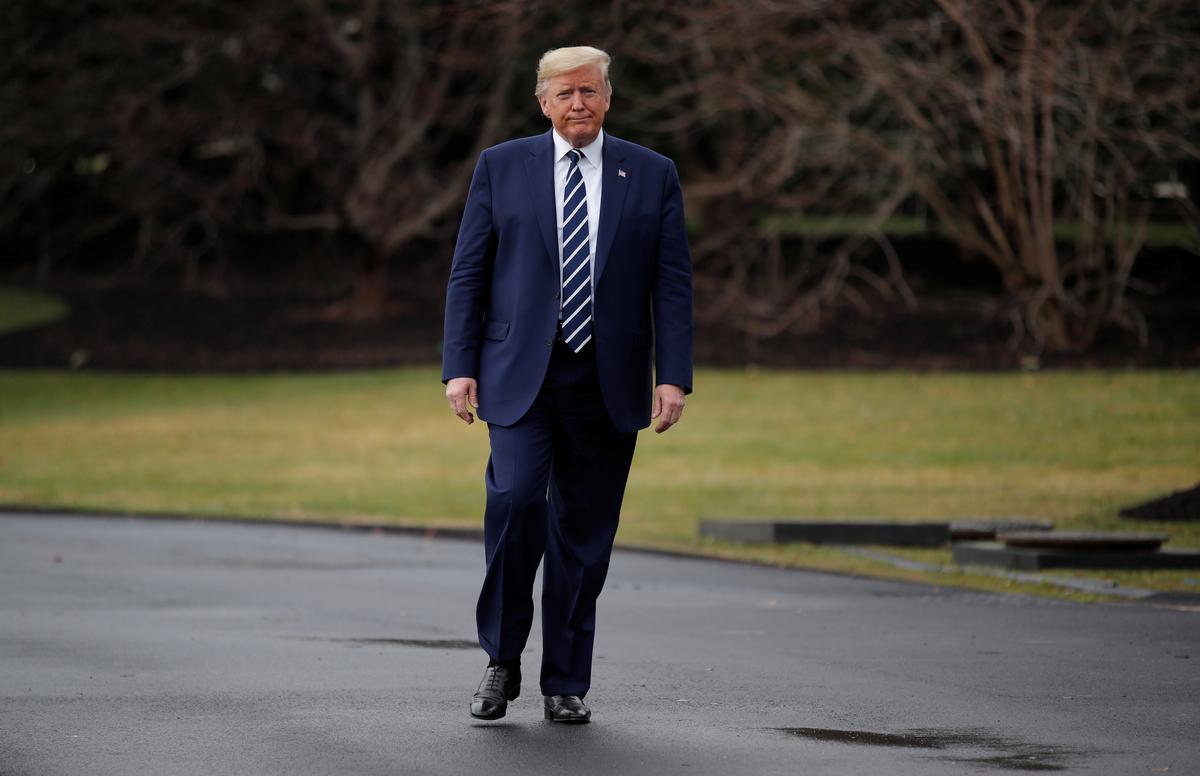 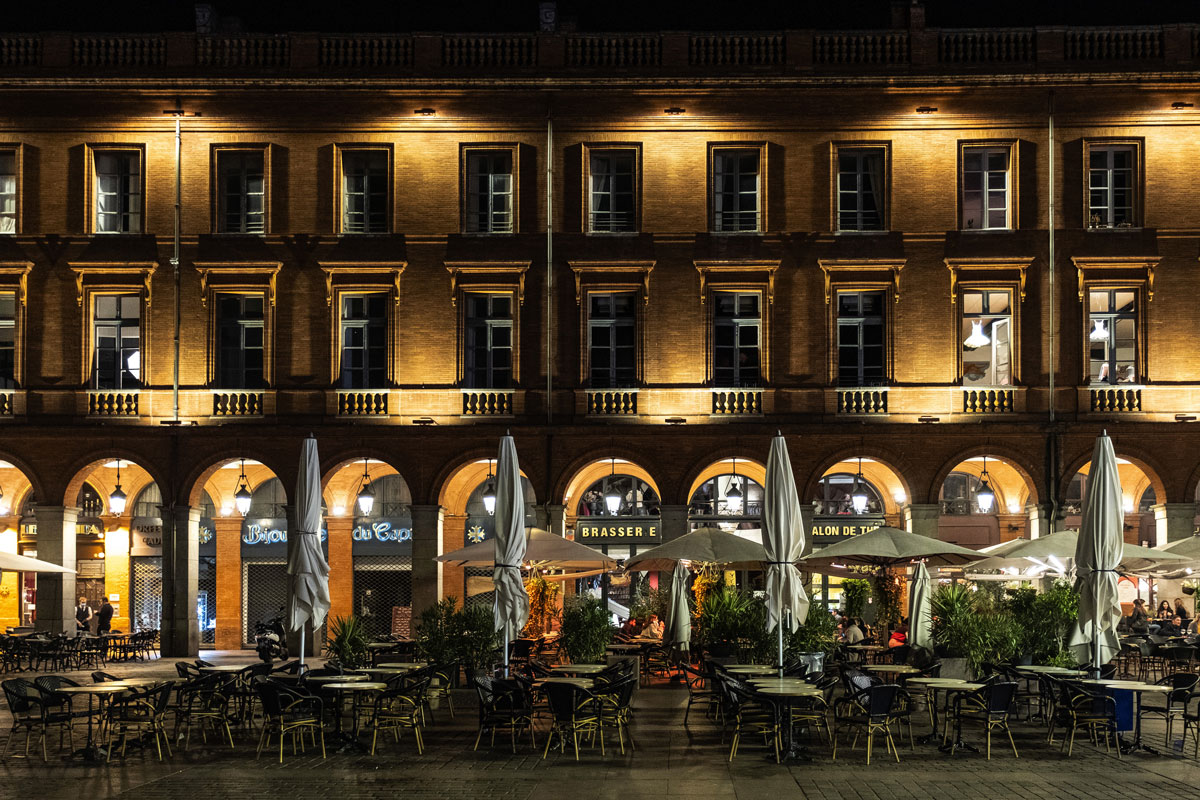 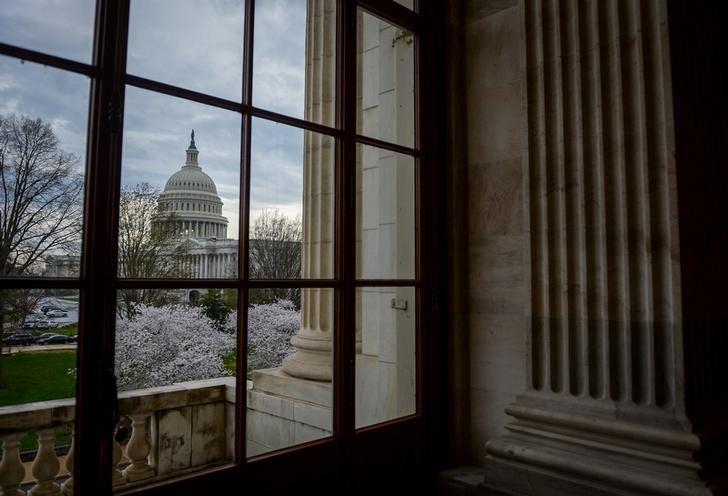 WASHINGTON (Reuters) – Democrats lost a seat in the U.S. Congress as Christy Smith, a California state legislator, conceded on Wednesday in […] 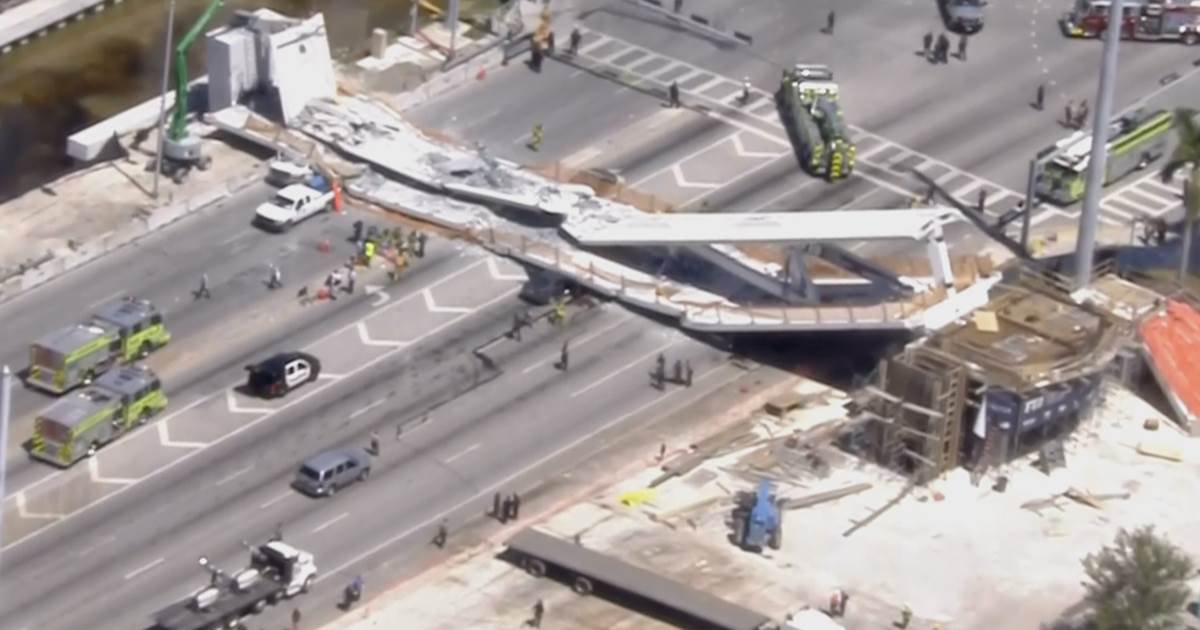 A pedestrian walkway in Miami collapsed on Thursday, killing several people. The Florida Highway Patrol confirmed the fatalities after multiple vehicles were […]