People eat more the night before a workout, a new study shows – likely because they know they’re going to work off the calories the next day.

UK sport scientists tested a group of 14 men – made up of university staff and students, as well as members of the public – who were all used to gym-based aerobic exercise.

When they had an exercise session planned for the next day, the participants ate an average of 10 per cent more, the team found.

The finding could be explained by an subconscious belief that having extra reward can be compensated for by engaging in positive, healthy behaviours, like exercise. 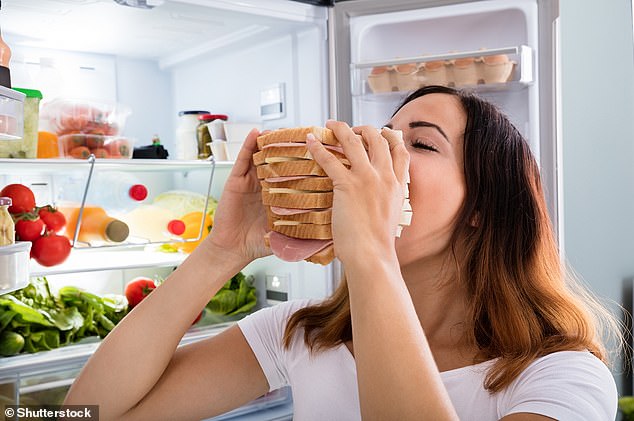 This is potentially risky for our bodies as it can lead to what’s called a ‘positive energy balance’ – where our energy expenditure is outweighed by our energy intake, and we put on weight.

Failure to maintain energy balance will result in weight change.

Energy balance can be maintained by regulating energy intake (through the diet), energy expenditure (adjusting physical activity level to match intake) or a combination of both.

And a reduction in energy intake which isn’t matched by a reduction in physical activity levels will result in weight loss (negative energy balance).

Interestingly, the increase in energy intake observed by the researchers was not enough to replace all the extra calories used during the exercise session.

The exercise session therefore created a ‘negative energy balance’ for the participants – where energy intake was outweighed by energy expenditure.

However, members of the public may not be so lucky if they choose to gorge on food the night before a training session.

The study was carried out by a team at the School of Sport, Exercise and Health Sciences, Loughborough University.

‘We observed around 10 per cent increase in energy intake the day before subjects planned to complete an exercise session compared to a rest control,’ said lead study author Dr Asya Barutcu.

‘So their expectation of different activity – i.e., exercise or rest – led them to eat more in anticipation of exercise.

‘However, even though they increased their energy intake by around 10 per cent in the preceding 24 hours, this was not enough to fully compensate for the energy deficit created by the exercise session.

‘So, engaging in exercise still created a short-term negative energy balance, which might be conducive for weight loss.’

The research could be crucial to help people address problems with their own eating habits and tackle an obesity crisis.

According to government figures, 20.1 per cent of children aged between 10 and 11 in England are obese and 14.2 per cent are overweight.

Worldwide obesity has nearly tripled since 1975, according to the World Health Organisation.

‘As the prevalence of overweight and obesity continues to rise globally, effective strategies to facilitate successful weight control are needed,’ the study authors say.

The testing for each trial (exercise or rest) was carried out over two days at Loughborough University.

Each participant was given breakfast (a choice of 21 items including cereal, yogurt and fruit) and lunch (24 items, including bread, ham, cheese and tinned tuna) at the university’s nutrition labs, so that their calorie intake could be monitored.

They were then given an evening food pack – containing 18 items including fruit, chocolate, crisps, and tomato pasta – to eat at home.

The following day, they returned to the nutrition lab to either rest or exercise. 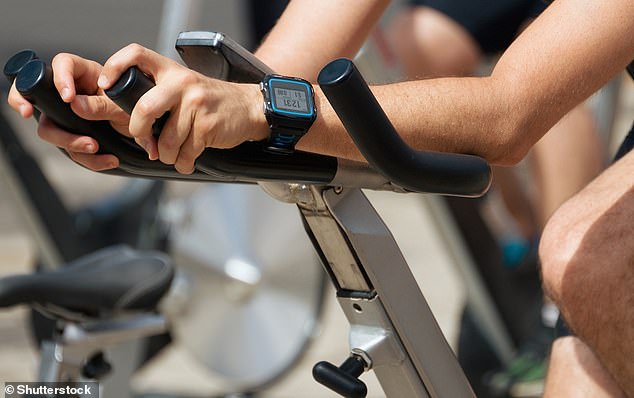 Although the trial did not involve monitoring weight loss, Dr Barutcu said that the results could be useful for people trying to slim down.

‘If you are someone who uses exercise as a means for weight loss, then you may need to be aware of your food intake and portion size, particularly in the period before you exercise,’ she said.

‘If your food intake increases as a consequence of exercise training, before and/or after a session, then you might not see the results that you are expecting.

‘In our study, the pre-exercise energy intake was sufficient to compensate for around 45 per cent of the energy deficit created by the exercise.’

The paper has been published in the European Journal of Nutrition.

OBESITY: ADULTS WITH A BMI OVER 30 ARE SEEN AS OBESE

Obesity is defined as an adult having a BMI of 30 or over.

A healthy person’s BMI – calculated by dividing weight in kg by height in metres, and the answer by the height again – is between 18.5 and 24.9.

Among children, obesity is defined as being in the 95th percentile.

Percentiles compare youngsters to others their same age.

For example, if a three-month-old is in the 40th percentile for weight, that means that 40 per cent of three-month-olds weigh the same or less than that baby.

The condition costs the NHS around £6.1billion, out of its approximate £124.7 billion budget, every year.

This is due to obesity increasing a person’s risk of a number of life-threatening conditions.

Such conditions include type 2 diabetes, which can cause kidney disease, blindness and even limb amputations.

Research suggests that at least one in six hospital beds in the UK are taken up by a diabetes patient.

Obesity also raises the risk of heart disease, which kills 315,000 people every year in the UK – making it the number one cause of death.

Carrying dangerous amounts of weight has also been linked to 12 different cancers.

This includes breast, which affects one in eight women at some point in their lives.

Among children, research suggests that 70 per cent of obese youngsters have high blood pressure or raised cholesterol, which puts them at risk of heart disease.

And if children are overweight, their obesity in adulthood is often more severe.

As many as one in five children start school in the UK being overweight or obese, which rises to one in three by the time they turn 10. 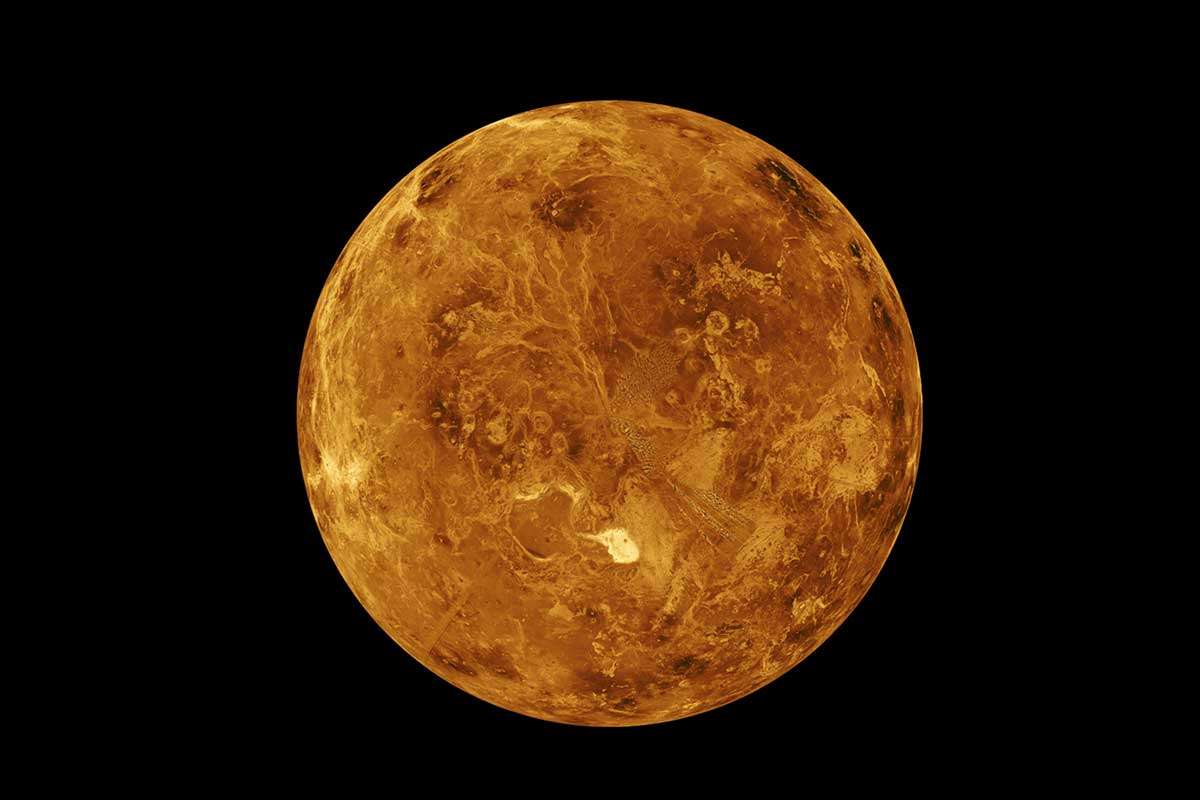 Venus is not what it used to beNASA/JPL By Leah Crane Nowadays, Venus is a sweltering hellscape with no liquid water on […] 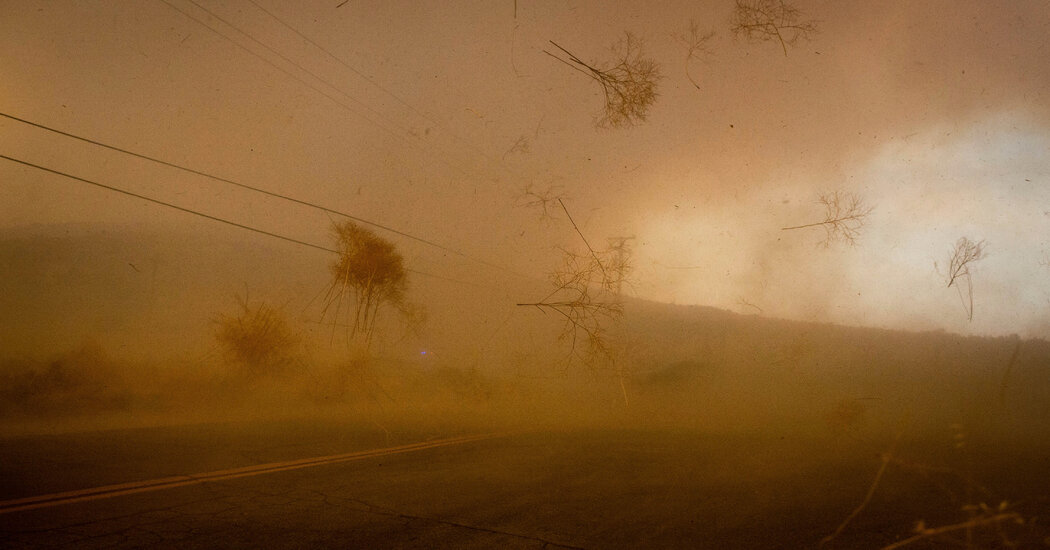 The combination of drought conditions and heat waves, which can make wildfires more likely, is becoming increasingly common in the American West, […] By Donna Lu Mark Makela/Alamy Stock Photo Calls for an outright ban on face recognition technology are growing louder, but it is […]