Zlatan Ibrahimovic was typically decisive on his return to international football, creating the only goal for Viktor Claesson in Sweden’s 1-0 win over Georgia in their opening Group B World Cup qualifier.

Returning after an absence of almost five years, the 39-year-old Milan striker Ibrahimovic became the oldest player to represent Sweden, beating the record of 38 years and 59 days previously held by goalkeeper Thomas Ravelli. The visitors threatened early on the break but the Swedes gradually grew into the game as their attacking quarter of Ibrahimovic, Claesson, Alexander Isak and Dejan Kulusevski took over. They went ahead 10 minutes before the break when Ibrahimovic chested down a ball into the box and volleyed it back from a tight angle for Claesson to take a touch and bundle home.

With the Swedes often careless in possession, Georgia fashioned a few decent chances and the best of them fell to substitute Levan Shengelia in the 82nd minute, but Kristoffer Nordfeldt made a superb save to keep his clean sheet intact. Ibrahimovic failed to add to his tally of 62 international goals before being replaced by Robin Quaison, but not before he was booked for apparently arguing with the referee.

“I’m new to this playing system,” Ibrahimovic said afterwards. “That will come. We made a little too many simple mistakes. If we can reduce them, we can become more dangerous in the attacking game. It will get better.”

Robert Lewandowski struck a thunderous 83rd-minute equaliser as Poland fought back to earn a 3-3 draw with Hungary in a pulsating World Cup Group I qualifier at the Puskas Arena. Hungary grabbed a sixth-minute lead when Roland Sallai latched on to Attila Fiola’s through ball, raced down the right and fired a low shot inside Wojciech Szczesny’s near post. Marco Rossi’s side doubled their advantage in the 53rd minute when Adam Szalai slotted home from inside the box. Poland had not managed a shot on target but Paulo Sousa made a triple substitution and two of those introduced, Krzysztof Piatek and Kamil Jozwiak, made an instant impact.

Piatek connected with a low cross from Gregorz Krychowiak to beat Peter Gulacsi with a confident finish and moments later Hungary’s defence crumbled, allowing Jozwiak to burst into the box and slot the ball into the net. Hungary regrouped, restoring their lead when Szalai crossed from the left and Willi Orban turned the ball in at the back post. But Lewandowski earned his side a point with a rasping drive into the top corner after he was found inside the box by Bartosz Bereszynski. Fiola was sent off for Hungary in stoppage time after picking up a second yellow card.

Germany made light work of their opening World Cup qualifier as goals from Leon Goretzka, Kai Havertz and Ilkay Gündogan secured a 3-0 home win over Iceland in Group J. Goretzka and Havertz fired the Germans into a 2-0 lead inside the opening seven minutes before Gündogan sealed victory with a sizzling low shot in the second half. The match went ahead after two German players, Jonas Hofmann and Marcel Halstenberg, were quarantined earlier on Thursday as Hofmann tested positive for Covd-19 and Halstenberg was identified as a category one contact. But Joachim Löw, who is stepping down after this year’s European Championship, was pleased with his team’s win.

“It wasn’t our most incredible performance, but it was very important to make a positive start to the new year and that’s what we’ve done tonight,” he said. “We knew they’d sit deep and we knew we were going to have to force them to move in order to create space.”

Jonas Wind created a goal for Martin Braithwaite and scored another himself to get Denmark off to a good start in Group F as they cruised to a 2-0 win away to Israel. Braithwaite fluffed his lines in a one-on-one with keeper Ofir Marciano in the 10th minute but he made no mistake three minutes later, collecting a pass from Wind and lobbing Marciano to put the Danes ahead. Wind got his name on the scoresheet in the second half, reacting quickest to a poor clearance from Hatem Abd Elhamed to fire home and double the lead.

Just before half-time in Copenhagen on Tuesday night Conor Coady could be heard shouting “Don’t get bored!” at his England teammates as […] 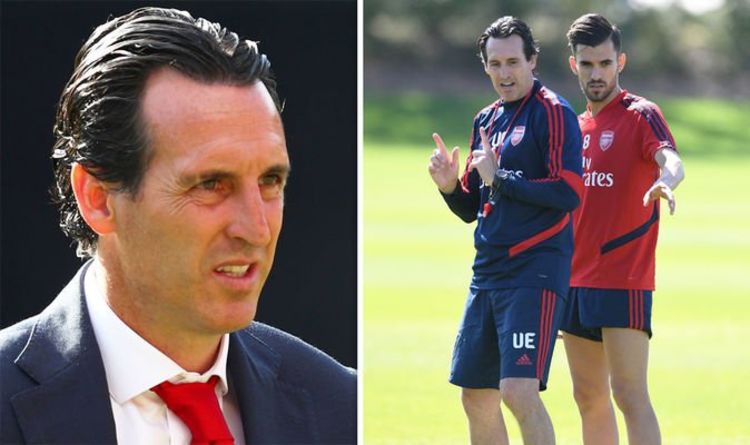 Arsenal players aren’t happy with training under Unai Emery. The Gunners have had a hit and miss start to the season this […]