More than half of Israel’s population has been fully vaccinated with two doses of protection against Covid-19, the country’s health minister announced today.

Israel’s rapid progress means more than 4.6million people have had two jabs and are eligible for a so-called ‘green pass’ in a scheme being closely watched by other countries.

Studies of the real-world Israeli data have shown the jabs both slashing the number of symptomatic cases and also appearing to reduce transmission of the virus. 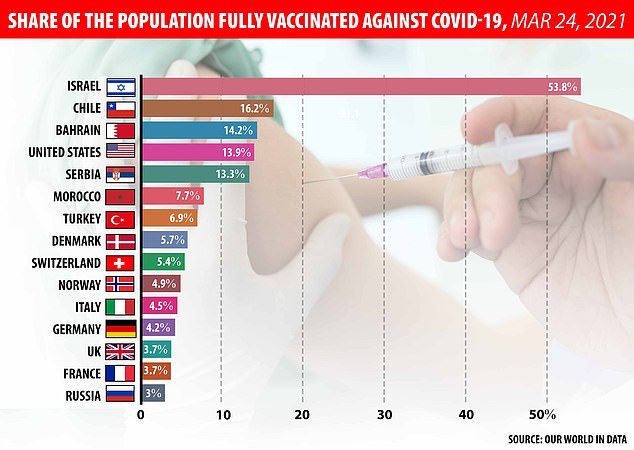 Israel has given two vaccine doses to more than half its population – a total of more than 4.6million people – in the fastest jab programme in the world. These figures from Our World In Data also show the UK level with France in second doses despite Britain’s first-dose priority 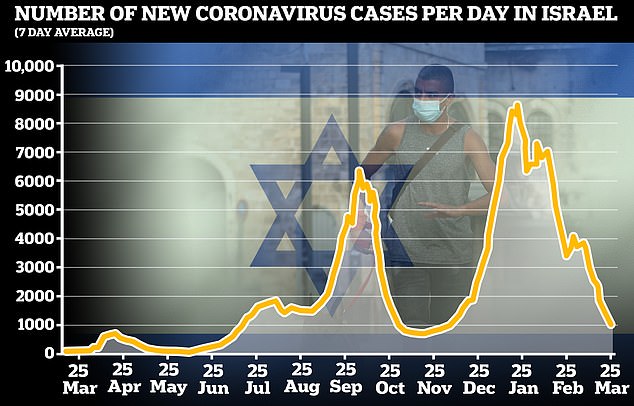 Cases have plummeted since Israel’s winter peak, with studies linking the country’s vaccination success to a drop in virus transmission 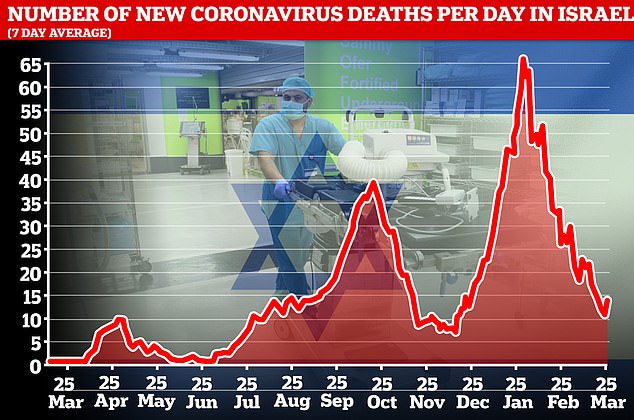 Israel’s health minister Yuli Edelstein celebrated the milestone today but called on citizens to ‘follow health guidelines so that the coronavirus does not return’.

Israel counts Palestinians in East Jerusalem as part of its population and has offered them vaccines, but has come under criticism for not doing more to help Palestinians.

Palestinian health officials have launched a more limited vaccine drive in the Gaza Strip and West Bank using doses provided by Israel, Russia, the UAE and the global COVAX scheme.

Israel vaccinated more than 100,000 Palestinian workers with permits to enter Israel or Jewish settlements in the West Bank.

But a survey by a Palestinian research centre released on Tuesday found that only 55 per cent of Palestinians were willing to take the vaccine when it becomes available.

In Israel, some officials privately estimate that 10 per cent of the eligible population do not intend to get vaccinated.

Israel began easing a nationwide lockdown in late February, with most businesses and schools gradually resuming activity with limits on capacity.

Along with the people who are fully vaccinated, another 8.7 per cent of the population are presumed immune after previously recovering from Covid-19.

That makes the majority of the population eligible for the so-called ‘green pass’ certificates that allow access to various leisure venues. 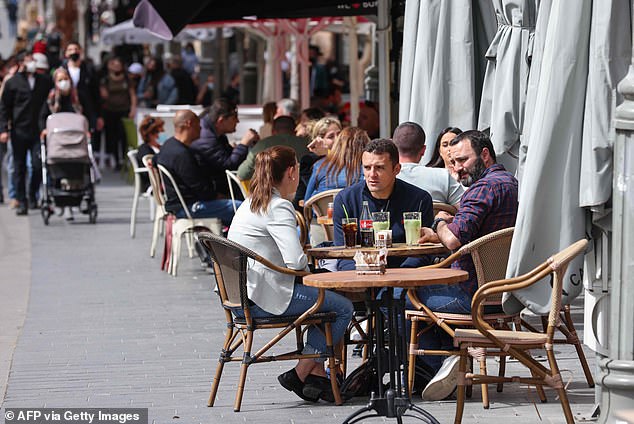 People sit on a cafe terrace in Jerusalem after Israeli authorities re-opened restaurants, bars and cafes to vaccinated people with a ‘green pass’ 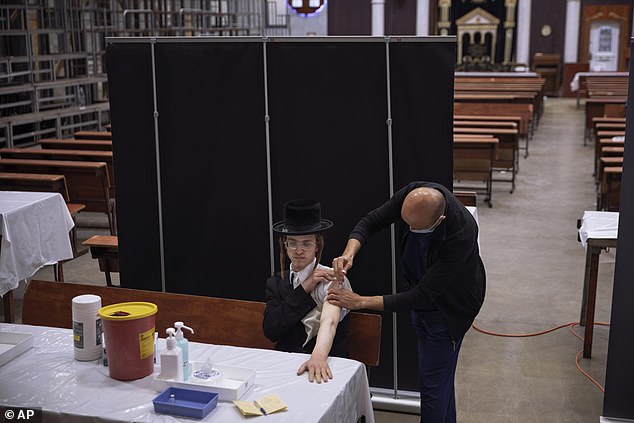 An ultra-Orthodox Jewish man receives his second dose of the Pfizer/BioNTech vaccine at a medical centre set up in a synagogue in Bnei Brak, Israel

Hezi Levi, the director-general of Israel’s health ministry, has estimated that the entire adult population will be fully inoculated by the end of May.

About a third of the country is under 16 and cannot be vaccinated until the shot is deemed safe for children.

This month the health ministry said that recovered Covid-19 patients could get vaccinated with a single jab administered at least three months after recovery.

Israel has seen an 85 per cent drop in daily Covid-19 deaths since the peak of the third wave in January, according to Eran Segal, a data scientist at Israel’s Weizmann Institue of Science.

There has also been a 72 per cent drop in the number of critically ill patients and there are 86 per cent fewer daily coronavirus cases, Segal says.

As of Thursday, Israel’s positivity rate was 1.1 per cent, a drop from nearly six per cent a month ago, according to the health ministry.

In addition, there were 482 patients in serious condition on Thursday, compared to more than 800 in late February. 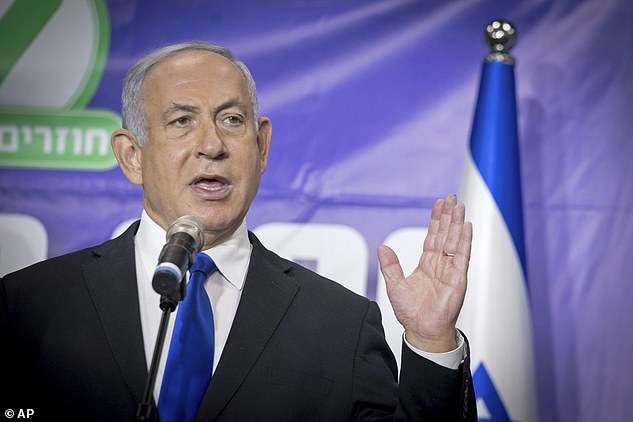 Israeli PM Benjamin Netanyahu hoped to ride Israel’s vaccine success to victory in this month’s election, but the results showed his path to a governing coalition remaining unclear 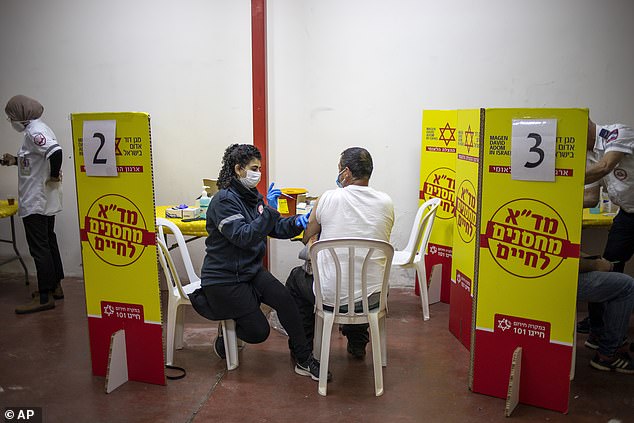 Amid criticism of Israel for not doing more to enable vaccination among Palestinians, some of those who work in Israel started receiving doses earlier this month

One real-world study published in February showed the Pfizer vaccine cutting the number of symptomatic cases by 94 per cent in Israel.

Other research suggested that the same vaccine had massively reduced transmission, shedding light on one of the biggest questions of the vaccine race.

Israel has had three lockdowns and 6,157 deaths since the start of the pandemic.

The government had faced public frustration at the uneven enforcement of health restrictions among the ultra-Orthodox population.

But Israel quickly leaped ahead in the vaccine race after beginning injections with the Pfizer jab in December.

Israel, which has one of the world’s most sophisticated medical data systems, secured a substantial stock of the Pfizer/BioNTech vaccine by striking a data-sharing deal with the drug giant.

The Israeli government has not confirmed speculation that it paid over the odds to obtain its free-flowing stock of vaccines.

Israeli PM Benjamin Netanyahu hoped the country’s success in the vaccine race would propel him to victory in this week’s election, the fourth in two years.

Netanyahu’s Likud party won the most seats but the country’s political deadlock appeared unresolved with his path to a governing majority uncertain. 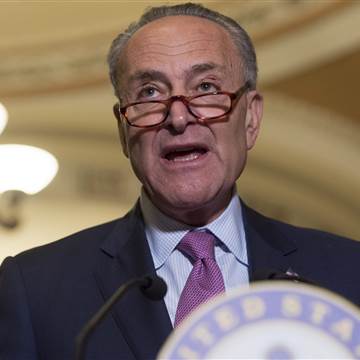 It’s in our genes to be suspicious of fine print. So, with the holiday season in full swing, Sen. Chuck Schumer on […] 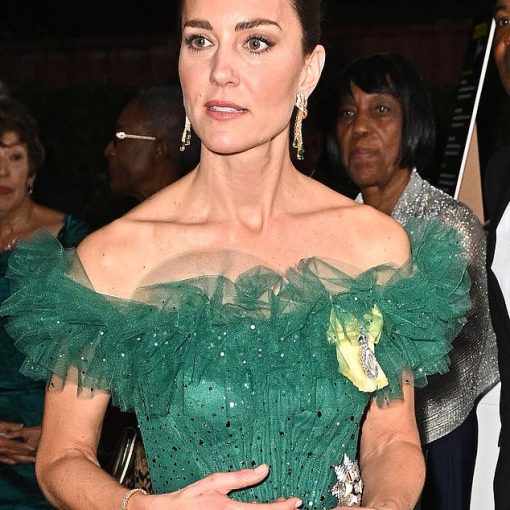 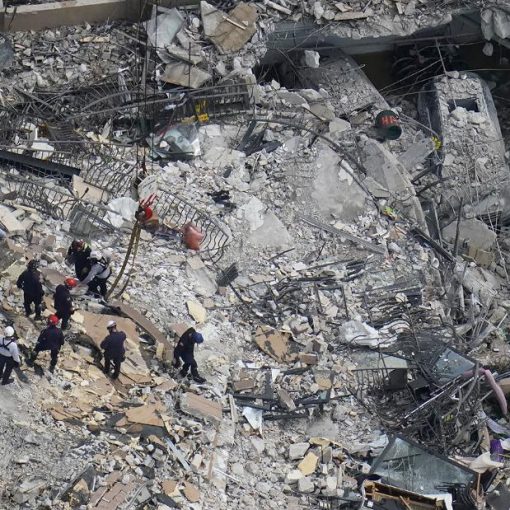 Nine people are dead, 152 are unaccounted for and 134 are accounted for in the collapse of Champlain Towers South as of […] 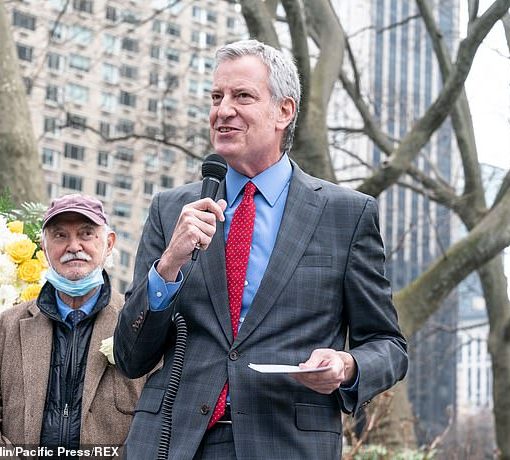