More than 70 percent of American seniors have had at least their first dose of Covid vaccine and nearly 14 percent of the population is fully vaccinated, White House officials said Wednesday.

An average of 2.5 million more shots are being given each day, including 1.7 million given Tuesday.

And Americans are finally getting more concrete evidence of just how well the shots can turn the tide of the pandemic after new research showed that fewer than one percent of health care workers developed COVID-19 after being fully vaccinated.

Even the ever-cautious Dr Anthony Fauci couldn’t help but express some optimism during a Wednesday Covid response team briefing.

‘Everyday we get closer and closer to that extraordinary degree of effectiveness, which we’re seeing at the community level,’ he said.

‘At the end of the day, that is what it is that is going to end this pandemic in this country.’

The U.S. is getting ever closer to that goal. On May 1, President Biden says he will ask all states to expand vaccination eligibility to all adults, in a move to speed the rollout – and at least 40 states are on track to meet that deadline, according to the New York Times. 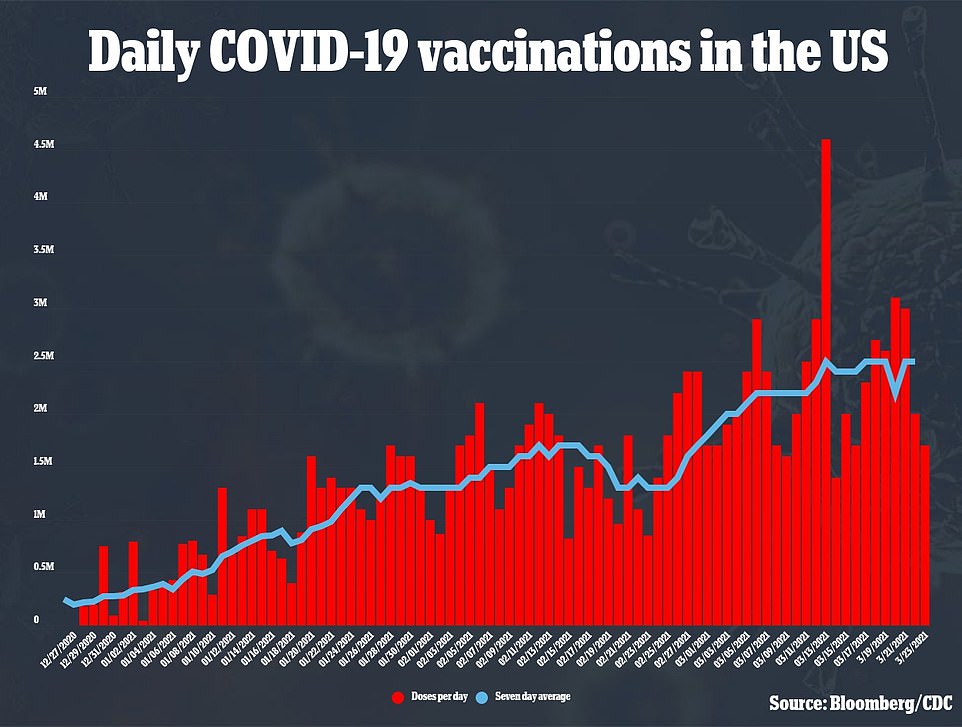 The US is now giving 2.5 million coronavirus vaccines a day, and has vaccinated more than 70 percent of its senior population 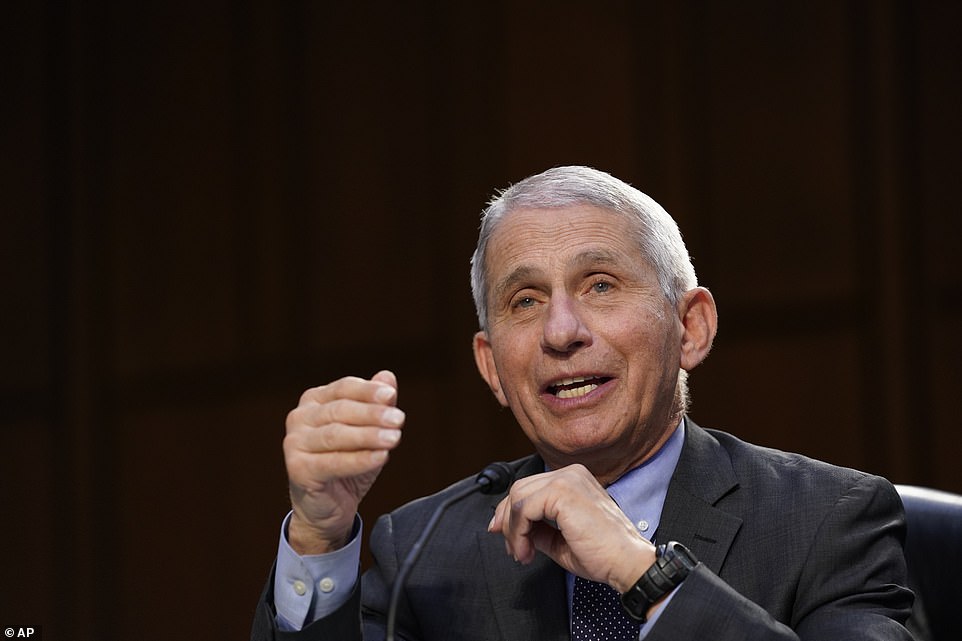 ‘At the end of the day, that is what it is that is going to end this pandemic in this country,’ Dr Anthony Fauci said of the promising data showing the ability of coronavirus vaccines to prevent infection and transmission of the virus (file)

A year ago today Dr Anthony Fauci was urging then-President Trump to be ‘flexible’ about when to start relaxing COVID-restrictions, which the president wanted then to loosen by Easter Sunday.

Now, much of the country is still under many of the same restrictions it was then.

That is slowly starting to shift as the vaccine rollout accelerates and the number of people eligible to get the shots expands.

Nearly half of US schools are now open for in-person learning.

The Centers for Disease Control and Prevention (CDC) has made it very clear that neither teachers nor students need to be vaccinated in order for schools to reopen.

But President Biden has urged all states to expand vaccine access to teachers and school staff.

To-date, 1.3 million educators have been vaccinated.

And President Biden has said that, on May 1, he will direct all states to expand eligibility to all Americans.

Already, at least five states – Alaska, Mississippi, West Virginia, Utah and Arizona have expanded access to anyone 16 or older, at least at their state-run sites.

And Oklahoma announced Wednesday that anyone 16 or older is now eligible through the Chickasaw nation’s program, but not the statewide one.

At least six states intend to expand by the end of the month, according to a CNN analysis. 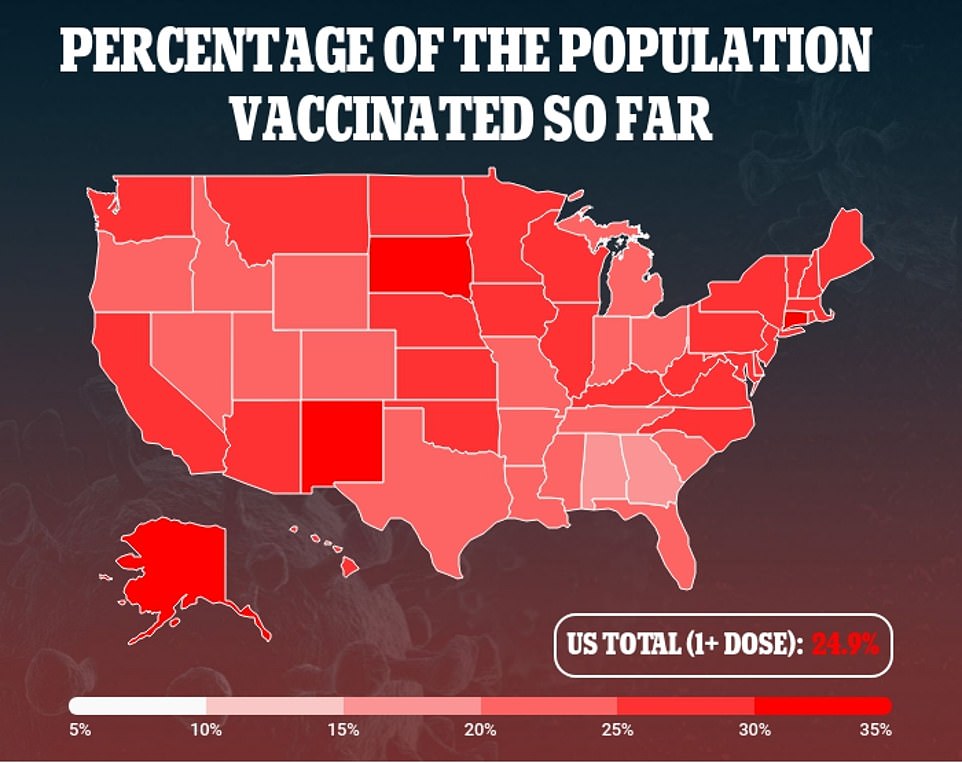 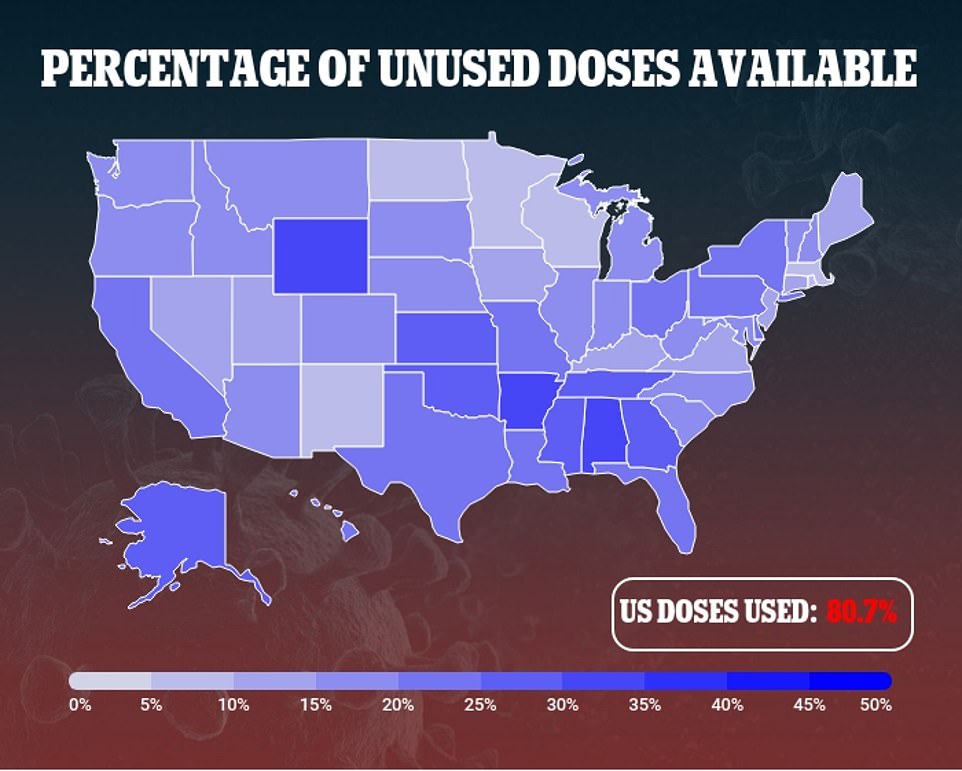 The majority of other U.S. states (40) claim they will be ready to vaccinate any adults by the president’s May 1 deadline.

Vaccination for the general public will in part be facilitated by the ramp-up of production by vaccine makers.

By the end of this month, three vaccine-makers are expected to have supplied the U.S. with 240 million doses of COVID-19 shots.

However, there is growing doubt within the Biden administration that Johnson & Johnson will not meet its goal of 20 million doses by then.

To-date, the firm has supplied the US with about nine million doses, leaving it less than a week to deliver another 11 million shots.

If Johnson and Johnson does fall short, the U.S. is still slated to have accumulated enough doses to fully vaccinate at least 119 million people – or 36 percent of the population.

At that rate, the US could reach herd immunity – with 75 percent of the population vaccinated – within four months.

Herd immunity is broadly considered the benchmark for when life can return to some semblance of normality. 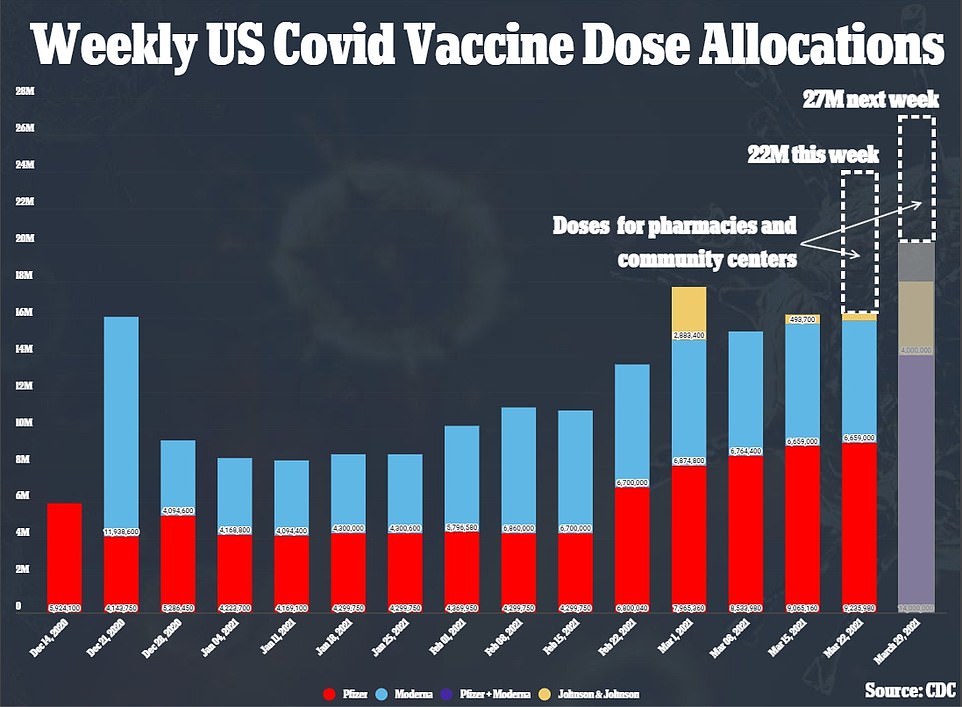 For the time being though, uncertainty surrounding whether vaccines prevent asymptomatic COVID-19 and transmission of the virus has led public health officials to remain very cautious about advising much freedom in movement or actions.

But this week the agency issued an update to that guidance, clarifying that fully vaccinated  people can spend time with low-risk friends or family with their masks off, but only with one household of them.

That’s because we know that vaccines (by various makers) are up to 95 percent effective at preventing symptomatic COVID-19, but trials of the shots did not determine whether the vaccines prevent infection itself, or transmission of the virus. 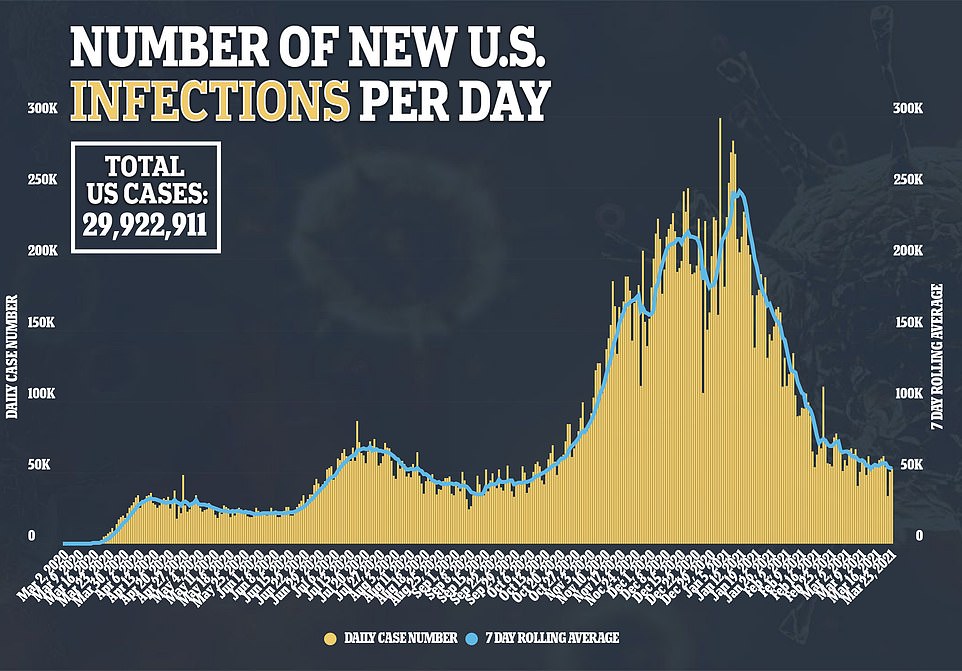 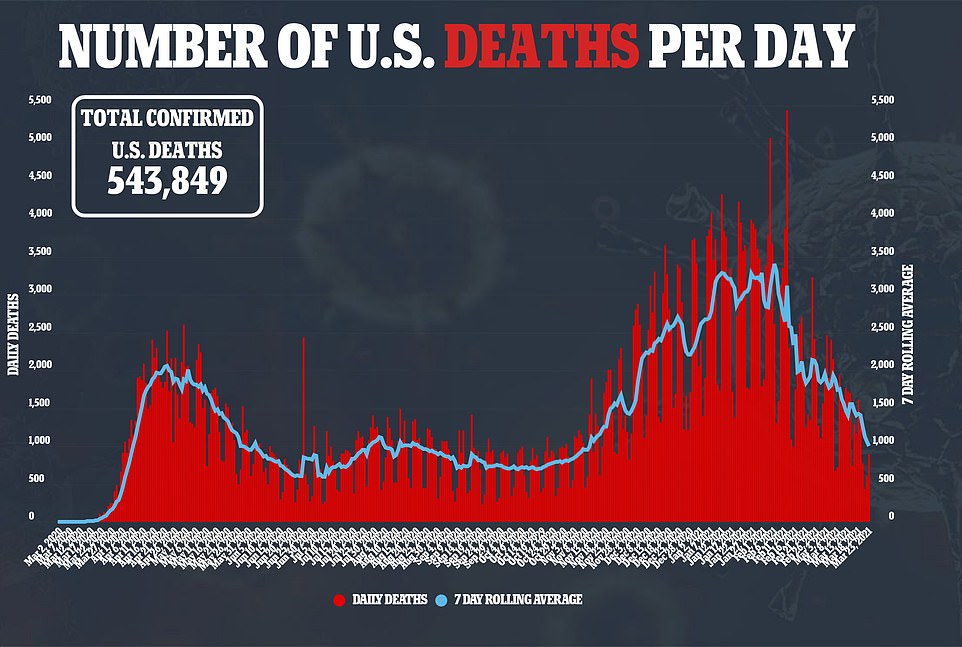 But the two new studies begin to shed some light on how vaccination – even after just the first dose – could affect these odds in the U.S.

In one study of employees at the University of Texas Southwestern Medical Center, 2.6 percent of all workers who were unvaccinated tested positive for COVID-19 compared to 1.82 percent of those given their first shot, a drop of 31 percent.

That same study also found that just 0.05 percent of those who received both doses of either the Pfizer-BioNTech or the Modena vaccine were later infected.

In another study of frontline workers in California, only 0.13 percent contracted the virus, known as SARS-CoV-2, after being fully immunized.

‘Right now, as the weeks go by, we see more and more that not only are these vaccines efficacious but, in the community, they are extremely effective in preventing infection with SARS-CoV-2,’ Dr Anthony Fauci, the nation’s top infectious disease expert, said at a press conference on Wednesday.

‘It’s a real proof-positive of the importance of vaccination.’

For the first study, published in the New England Journal of Medicine, a team from the University of Texas Southwestern Medical Center (UTSW), in Dallas, looked at vaccinations among their frontline workers.

A total of 59 percent received at least dose of the Pfizer vaccine during that time period and 30 percent were given both doses.

During that month-and-half, 320 of the eligible employees, 1.5 percent, tested positive for coronavirus.

About 2.6 percent of the not vaccinated group was infected. This fell to 1.82 percent among the group that received one dose.

Just 0.05% of workers at the University of Texas Southwestern who received both doses of either the Pfizer-BioNTech or the Modena vaccine later tested positive for COVID-19 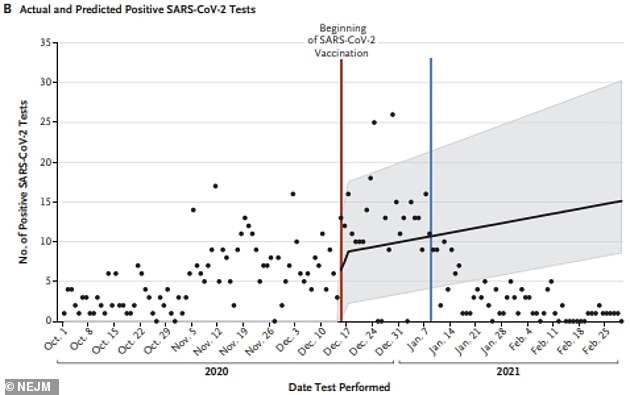 Data showed that from January 9 onward (blue line), the number of positive tests among UTSW employees was lower than the number projected without vaccination (black line)

However, of those who were fully immunized just four out of more than 8,100 were infected, representing just 0.05 percent of the group.

What’s more, from January 9 onward, the number of positive tests among UTSW employees was lower than the number projected without vaccination.

‘The effect of vaccination on the preservation of our workforce has been dramatic. We observed a greater than 90 percent decrease in the number of employees who are either in isolation or quarantine,’ the authors wrote.

‘Real-world experience with SARS-CoV-2 vaccination at UTSW has shown a marked reduction in the incidence of infections among employees. This decrease has preserved the workforce when it was most needed.’

In the second study, also published in the New England Journal of Medicine, a group of researchers in California looked at vaccinated healthcare workers in the state.

More than 36,600 frontline workers received the first dose either the Pfizer or Moderna vaccines, and more than 28,184 – 77 percent – received the second dose.

Among the vaccinated employees, 379 people tested positive for the virus at least one day after getting their first dose.

About 0.9 percent of all people who receive one dose were infected, and most of the infections occurred within the first week, meaning they had likely already contracted the virus before being vaccinated.

Thirty-seven people were infected with COVID-19 after the second dose, meaning just 0.13 percent of all people fully inoculated fell ill.

What’s more, after two weeks, the general amount of time it takes for the virus to build up antibodies, just seven of the fully immunized group tested positive.

‘The rarity of positive test results 14 days after administration of the second dose of vaccine is encouraging and suggests that the efficacy of these vaccines is maintained outside the trial setting,’ the authors wrote.

(Reuters Health) – Teens and young men in correctional facilities are at increased risk of dying by suicide, but they are otherwise […] 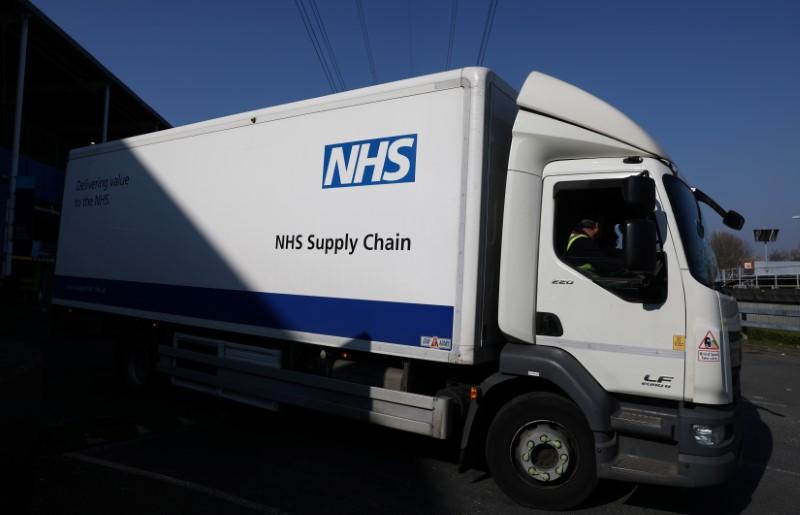 LONDON (Reuters) – The United Kingdom will use firefighters to help deliver food, retrieve dead bodies and drive ambulances as it braces […] 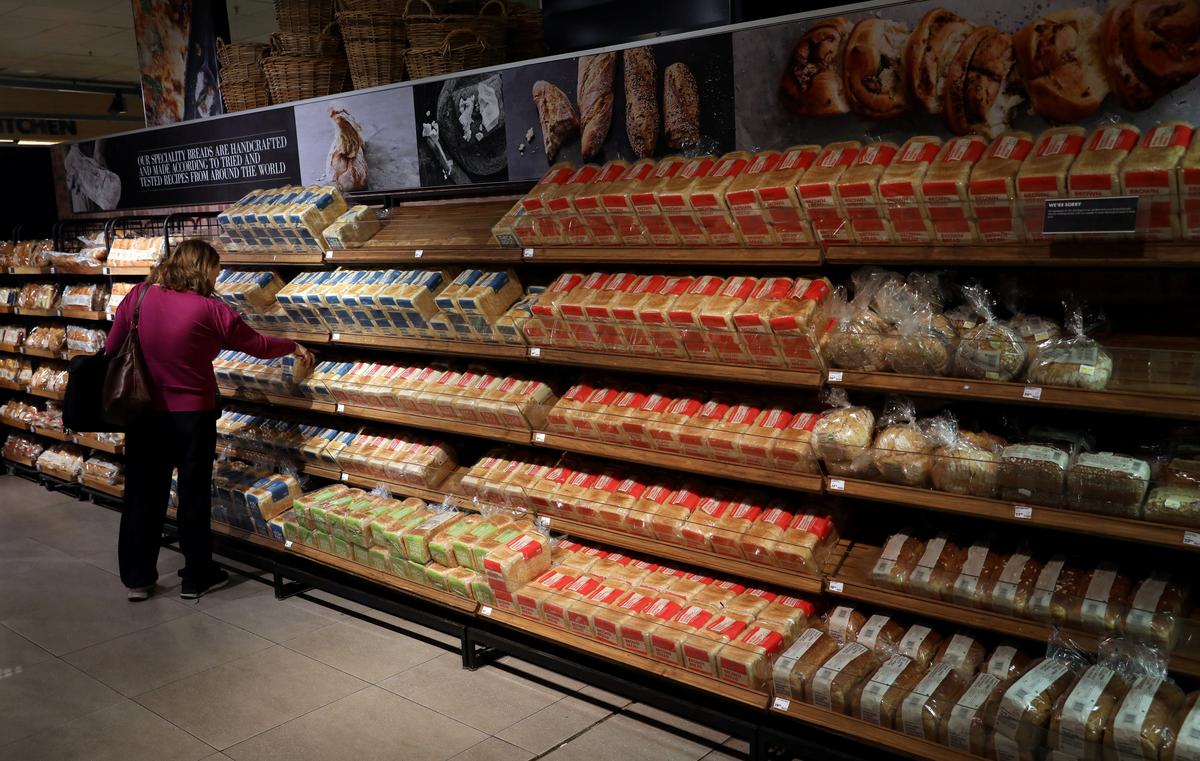 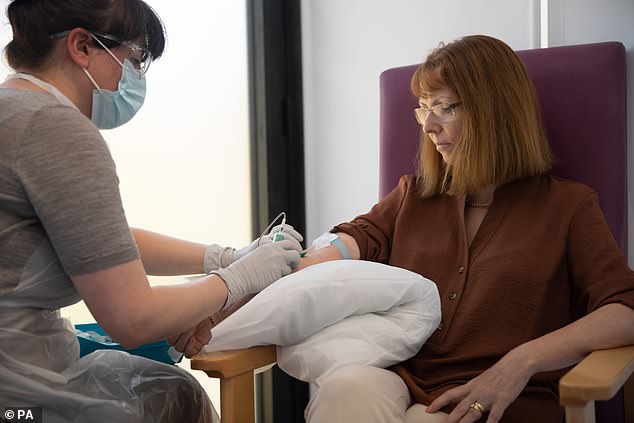 The Government plans to double its winter flu vaccination programme to 30million people this year, with free jabs for all over-50s and […]