The materials essential for life on Earth including organic matter and water have been discovered on the surface of an asteroid for the first time, a study shows.

Planetary scientists from Royal Holloway University of London examined a single grain of dust returned to Earth from asteroid Itokawa by the Japan Aerospace Exploration Agency (JAXA) as part of its first Hayabusa mission in 2010.

The water and organic matter originated on the asteroid itself, rather than arriving as part of a collision, suggesting it evolved chemically over billions of years.

It is the first time such material has been found on the surface of an asteroid, according to the British team behind the new study.

This is a major discovery that could ‘re-write the history of life on our planet,’ scientists claim, as it is so similar to the evolution pathway on the early Earth.

‘Although the organic matter is not directly suggesting life is carried on the asteroid, it tells us the asteroid carries the same raw materials that provided initial feedstock for the origin of life on Earth,’ lead author Dr Queenie Chan told MailOnline. 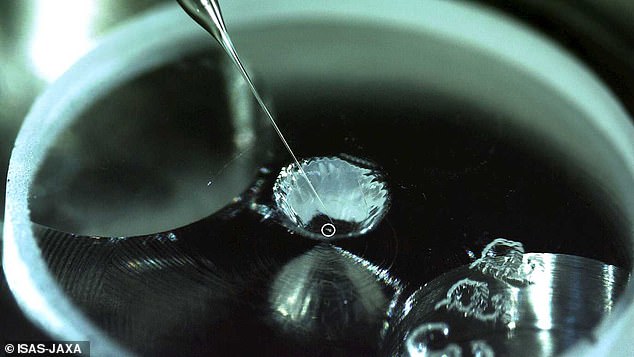 The water and organic matter originated on the asteroid itself, rather than arriving as part of a collision, suggesting it evolved chemically over billions of years

ITOKAWA: A NEAR EARTH ASTEROID VISITED BY JAXA

The ‘near-Earth’ asteroid Itokawa is about 330 metres in diameter and shaped roughly like a peanut.

It was the first asteroid to be the target of a sample return mission – that is a spaceflight to take bits of rock and bring them back to Earth.

In 2005 the Japanese Hayabusa probe collected dust particles from the asteroid and returned them to Earth.

It has been extensively studied and findings have shown evidence of water and organic material ‘native’ to the asteroid itself.

The asteroid has been slowly incorporating the liquid and organic materials in much the same way the Earth does, according to the researchers.

Itokawa has been constantly evolving over billions of years by incorporating water and organic materials from foreign extra-terrestrial material, just like the Earth.

In the past, the asteroid will have gone through extreme heating, dehydration and shattering due to catastrophic impact, the study authors explained.

However, despite this, the asteroid came back together from the shattered fragments and rehydrated itself with water that was delivered via the in fall of dust or carbon-rich meteorites.

This study shows that S-type asteroids, where most of Earth’s meteorites come from, such as Itokawa, contain the raw ingredients of life.

‘S-type asteroids – the ‘stony’ type asteroids – might not contain as high abundance of carbon rich material as the carbonaceous asteroids, however, their chemistry and water content evolved in a similar way to our prebiotic Earth,’ Chan told MailOnline.

‘If other systems elsewhere in the wider universe had the same favourable conditions like the early Earth, these raw ingredients that carried by these asteroids could have kick-started life elsewhere.’

The analysis of this asteroid changes traditional views on the origin of life on Earth which have previously heavily focussed on C-type carbon-rich asteroids.

Dr Chan said this shows the value of bringing samples of space rock back to Earth.

‘After being studied in great detail by an international team of researchers, our analysis of a single grain, nicknamed ‘Amazon’, has preserved both primitive (unheated) and processed (heated) organic matter,’ she said.

‘The organic matter that has been heated indicates that the asteroid had been heated to over 600°C in the past.

‘The presence of unheated organic matter very close to it, means that the in fall of primitive organics arrived on the surface of Itokawa after the asteroid had cooled.’

‘These findings are really exciting as they reveal complex details of an asteroid’s history and how its evolution pathway is so similar to that of the prebiotic Earth.’ 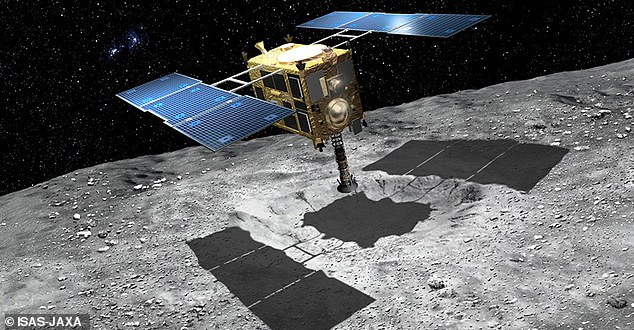 It is the first time such material has been found on the surface of an asteroid, according to the British team behind the new study 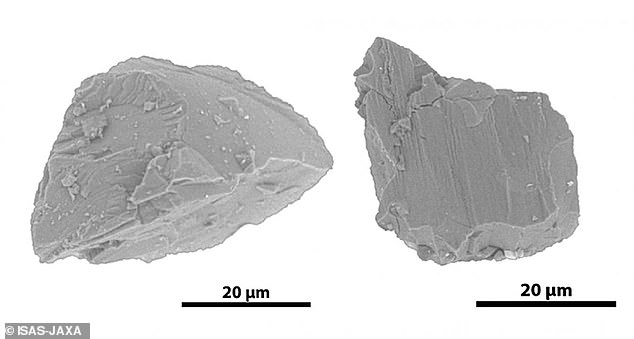 This is a major discovery that could ‘re-write the history of life on our planet,’ scientists claim, as it is so similar to the evolution pathway on the early Earth

DIFFERENT TYPES OF ASTEROIDS FROM THE SOLAR SYSTEM

Asteroid classification has proved controversial, with a number of letter-based systems developed.

According to NASA the three main types are labelled C, S and M.

C-type (chondrite) asteroids are the most common in the solar system and likely consist of clay and silicate rocks.

They are darker than other asteroids and the most ancient objects in the solar system – dating back to its birth.

S-type (stony) asteroids are made of silicate materials as well as nickel-iron and are the most common visitors to the Earth of the asteroid types.

M-type (nickel-iron) asteroids vary depending on how far from the sun they formed.

Some are partly melted with iron sinking to the centre and forcing volcanic lava to the surface.

Chan said the findings were both surprising and not particularly surprising at the same time – in part due to observations from 2005 of Itokawa.

‘In a mission like Hayabusa, which picked samples up from the asteroid surface by quick touchdowns, it would be difficult to sample carbonaceous material.

‘Researchers have been attempting to look for organic matter from Hayabusa samples in the past, and it was very difficult to prove that the organic material was indigenous to the asteroid,’ she told MailOnline.

‘Only one group of scientists managed to find water in Hayabusa sample in 2019, but they did not look at the organic content.’

It wasn’t particularly surprising to her that they found the material as the mission observed a ‘huge black boulder’ on the surface of the space rock in 2005.

‘Scientists think that this big boulder is a huge carbonaceous meteorite, but never get to prove it. So, we expected that there would possibly be carbonaceous material on the surface of asteroid Itokawa,’ she said.

The success of this mission and the analysis of the sample that returned to Earth has since paved the way for a more detailed analysis of material returned by missions such as JAXA’s Hayabusa2 and NASA’s OSIRIS-Rex missions.

These are other sample-return missions, with Hayabusa2 returning larger amounts of rock samples from the asteroid Ryugu in 2020 and OSIRIS-Rex expected to return samples of the asteroid Bennu in 2023.

‘Both of these missions have identified exogeneous materials on the target asteroids Ryugu and Bennu, respectively,’ said Chan.

‘Our findings suggest that mixing of materials is a common process in our solar system,’ adding studying more samples will hopefully confirm those findings.

The findings have been published in the journal Scientific Reports.

Jaxa’s Hayabusa Two probe is on a mission to study the ancient asteroid Ryugu in a bid to help scientists better understand the origins of the solar system. 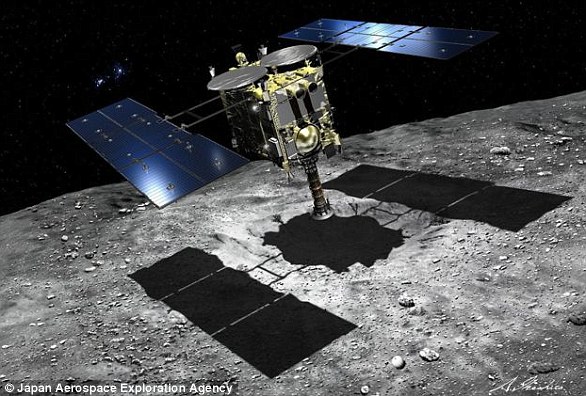 The probe is loaded with four surface landers, an array of cameras and even an explosive device that will dig out subsurface rock samples.

Ryugu, a Type C asteroid, contains traces of water and organic material and it is hoped that analysing this material will reveal what the early conditions were like at the time the solar system formed around 4,6 billion years ago.

Hayabusa Two is expected to return to Earth in late 2020 carrying samples for further analysis.

Skygazers in Britain were able to witness the rare Super Blood Wolf Moon during the early hours of Monday morning. Some were […] 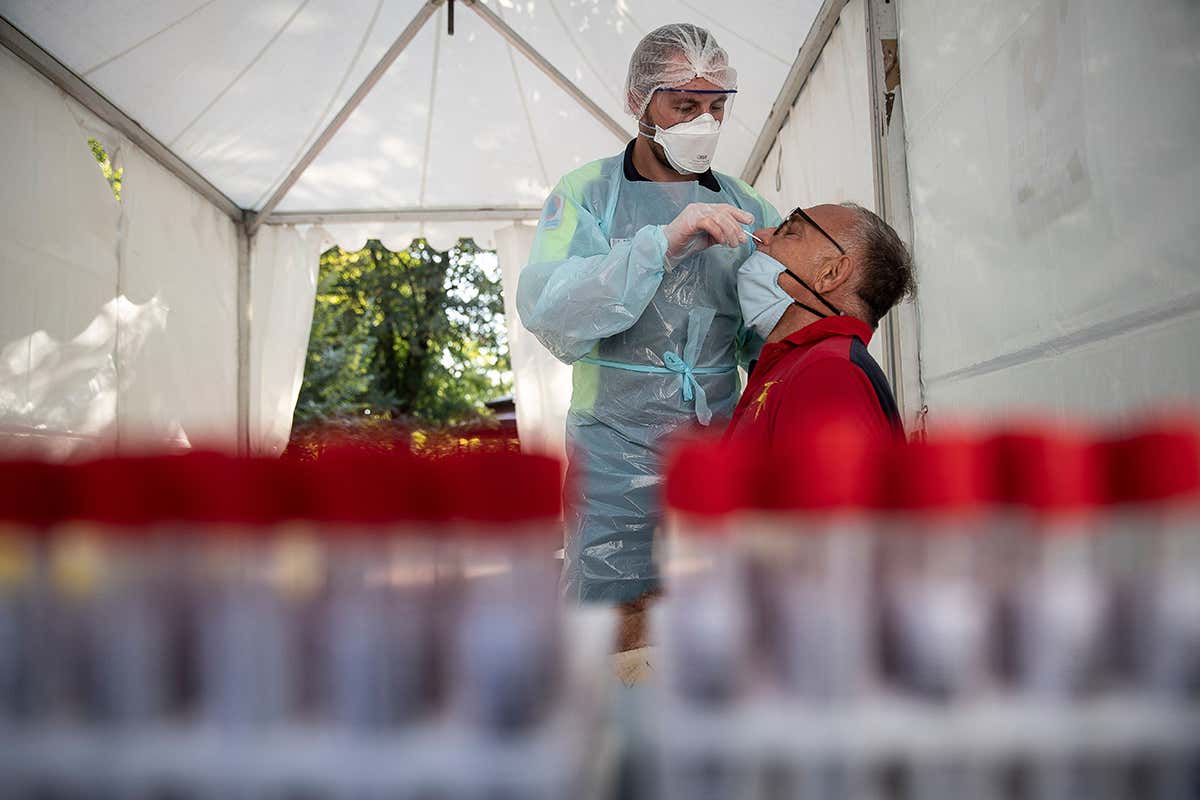 By Michael Le Page Covid-19 testing in Strasbourg, FranceJean-Francois Badias/AP/Shutterstock In Europe, the long-predicted second wave of the coronavirus pandemic is now […] 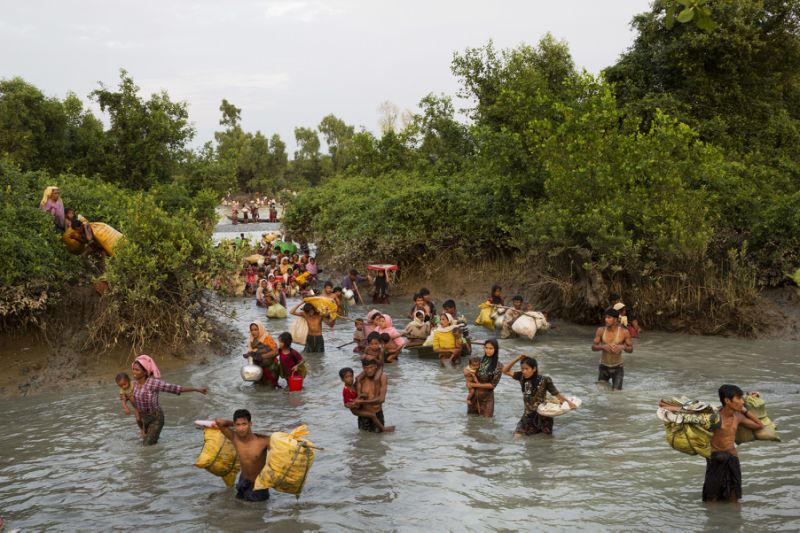 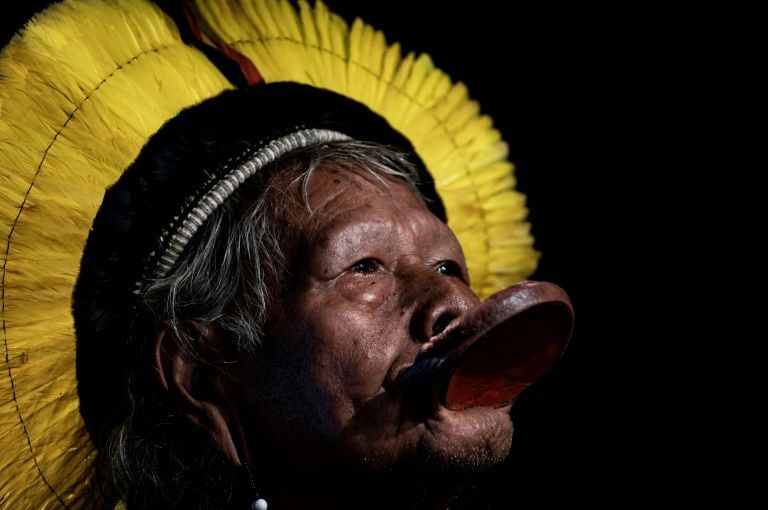