At the end of Black History Month, the Sweden striker Zlatan Ibrahimovic, a larger-than-life figure who has resuscitated an entire city during a remarkable season with Milan, felt the need to take time out of his schedule to criticize LeBron James for using his global platform to turn a spotlight on social injustices in the United States. LeBron has been one of the NBA’s leading voices in the ongoing fight against police brutality, racism, inequality and social change, using his voice in a way that will have him permanently listed with the great athlete-activists of the past such as Bill Russell, Muhammad Ali, Kareem Abdul-Jabbar, John Carlos, Tommie Smith, Mahmoud Abdul-Rauf, Craig Hodges and Colin Kaepernick.

In an interview with Discovery+ in Sweden, Ibrahimovic felt compelled to criticize the Los Angeles Lakers star and any sportsperson who dares to use their position and platform to speak out on issues beyond the narrow focus of the sport they play.

“I like (James) a lot,” Ibrahimovic said. “He’s phenomenal, what he’s doing, but I don’t like when people with a status speak about politics. Do what you’re good at doing.

“I play football because I’m the best at playing football. I’m no politician. If I’d been a politician, I would be doing politics.

“This is the first mistake famous people do when they become famous: for me it is better to avoid certain topics and do what you’re good doing, otherwise you risk doing something wrongly.”

On Friday, after the Lakers’ win over the Portland Trail Blazers, LeBron responded to the criticism from Zlatan by vowing never to stay silent about social causes. As he put it to reporters: “I will never shut up about things that are wrong. I preach about my people and I preach about equality, social justice, racism, voter suppression – things that go on in our community.

“Because I was a part of my community at one point and saw the things that were going on, and I know what’s still going on because I have a group of 300-plus kids at my school that are going through the same thing and they need a voice.

“I’m their voice and I use my platform to continue to shed light on everything that might be going on, not only in my community but in this country and around the world.”

LeBron didn’t stop there. He went on to reference a Canal Plus interview with Ibrahimovic from three years ago where he blamed “undercover racism” for what he’s considered unfair treatment by the Swedish media.

“He’s the guy who said in Sweden, he was talking about the same things, because his last name wasn’t a [traditional Swedish] last name, he felt like there was some racism going on,” James said. “I speak from a very educated mind. I’m kind of the wrong guy to go at, because I do my homework.”

Maybe Ibrahimovic watched a little too much Fox News while he was living in the US during his two-year spell with the LA Galaxy, because his criticism sounded very familiar to Laura Ingraham, the conservative opinionator who infamously demanded that LeBron “shut up and dribble” in a segment many perceived as racist. It’s a line of argument that exposed Ingraham and the entire American right wing: It’s perfectly OK for athletes to use their platform when they are promoting a narrative that you agree with or that is personal to you. That double standard was on full display last year when the GOP invited NFL and college football legend Herschel Walker to be a speaker at the Republican national convention.

However, if the narrative is in opposition to their personal beliefs, then the athlete needs to stay in his lane, or stick to sports, or shut up and dribble – or as Ibrahimovic put it – do what you’re good at doing. And again, as LeBron pointed out, Ibrahimovic had zero problem speaking out about the racism and discrimination he felt that he was a victim of. That’s the definition of hypocrisy.

And finally, for the record, LeBron’s decision to stand with the athletes and activists across America in calling for an end to the police killings of unarmed Black and Brown people isn’t “politics”, but a demand for basic human rights. And that’s something that anyone – no matter what color, race, nationality, place of origin, background, religion, occupation or status – should have the moral courage to support. Like Dr Martin Luther King said, there comes a point when silence is betrayal. 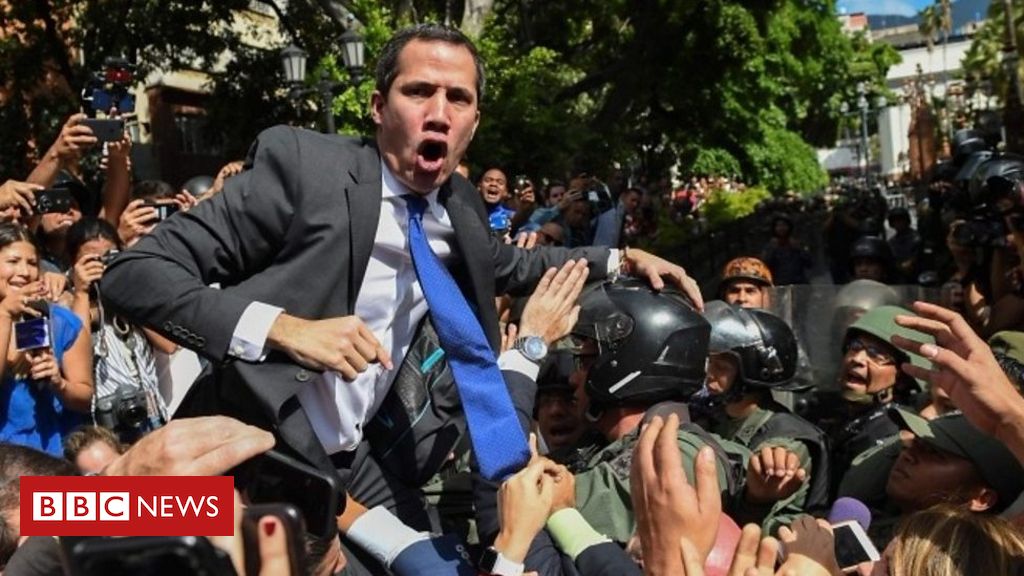 In dramatic scenes, Venezuela’s opposition leader Juan Guaidó has forced his way into the National Assembly building after being stopped by troops. […]

(Bloomberg) — A Ukrainian passenger plane that crashed after taking off from the Iranian capital on Jan. 8 was downed by two […]