NASA has revealed a stunning photo of Venus taken by its Parker Solar Probe from 7,693 miles away.

The image, taken July 11 last year, is an almost eerie black and white shot of the planet’s nightside – the side facing away from the Sun.

A bright rim around the edge of the planet is the nightglow – light emitted by oxygen atoms high in the atmosphere that recombine into molecules.

NASA’s $1.5 billion Parker Solar Probe – which is focused on studying the Sun and represents humanity’s first visit to a star – launched in August 2018.

Venus plays a massive role in Parker’s seven-year mission, however, as it leverages the planet’s gravitational pull during multiple fly-bys.

This new image snapped in July was taken during the third of seven Venus fly-bys scheduled throughout Parker’s mission. 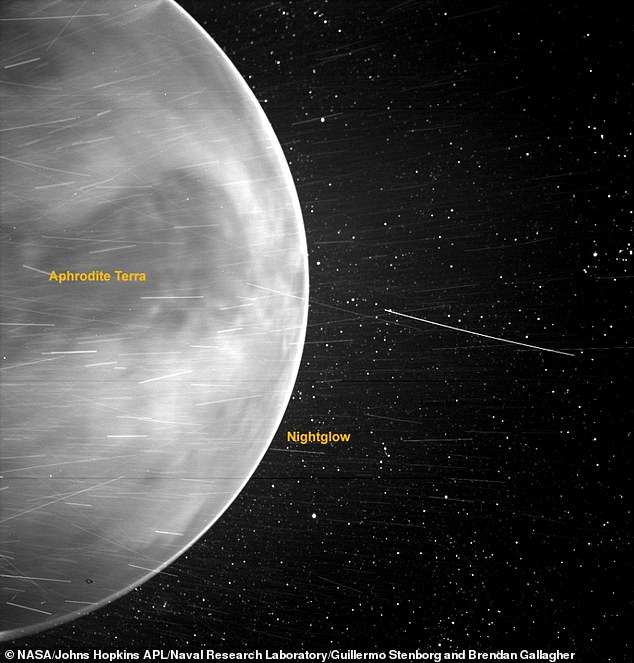 NASA’s Parker Solar Probe had a up-close view of Venus when it flew by the planet in July 2020. Some of the features seen by scientists are labelled in this annotated image. The dark spot appearing on the lower portion of Venus is an artefact from the WISPR instrument

– Trace the flow of energy that heats and accelerates the solar corona and solar wind.

– Determine the structure and dynamics of the plasma and magnetic fields at the sources of the solar wind.

This new image from July was taken by the spacecraft’s WISPR instrument – Wide-field Imager for Parker Solar Probe.

The prominent dark feature in the centre of the image is Aphrodite Terra, the largest highland region on the planet’s surface.

The feature appears dark because of its lower temperature, about 85°F (30°C) cooler than its surroundings.

That aspect of the image took the team by surprise, according to Angelos Vourlidas, WISPR project scientist from the Johns Hopkins Applied Physics Laboratory (APL) in Laurel, Maryland.

‘WISPR is tailored and tested for visible light observations – we expected to see clouds, but the camera peered right through to the surface,’ Vourlidas said. 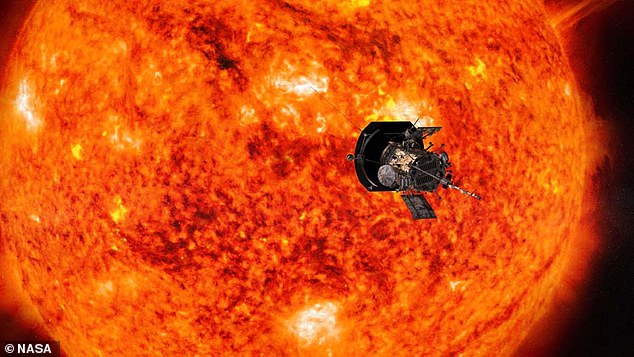 Though Parker Solar Probe’s focus is the Sun, Venus plays a critical role in the mission. The spacecraft whips by Venus a total of seven times over the course of its seven-year mission. Pictured, artist’s impression of Parker and the Sun

This surprising observation sent the WISPR team back to the lab to measure the instrument’s sensitivity to infrared light.

If WISPR can indeed pick up near-infrared wavelengths of light, it would provide new opportunities to study dust around the Sun and in the inner solar system.

If it can’t pick up extra infrared wavelengths, then these images – showing signatures of features on Venus’ surface – may have revealed a previously unknown ‘window’ through the Venusian atmosphere.

‘Either way, some exciting science opportunities await us,’ said Vourlidas.

Parker’s primary science goals are to trace the flow of energy and understand the heating of the solar corona – the outermost layer of the Sun – and to explore what accelerates the solar wind.

Though Parker’s focus is the Sun, Venus is playing a critical role in its seven-year mission, which is set to run until 2025.

The spacecraft will whip by Venus a total of seven times, using the planet’s gravity to bend the spacecraft’s orbit and reduce its orbital energy.

These Venus gravity assists allow Parker to fly closer and closer to the Sun on its mission to study the dynamics of the solar wind close to its source.

In its seven-year run, Parker is making up to 24 close approaches to the Sun (known as a perihelion), with each one closer than the last (its seven approaches of Venus, meanwhile, vary and don’t necessarily get closer each time).

At closest approach, Parker will be hurtling around the Sun at approximately 430,000 miles per hour – fast enough to get from Philadelphia to Washington, D.C., in a single second. 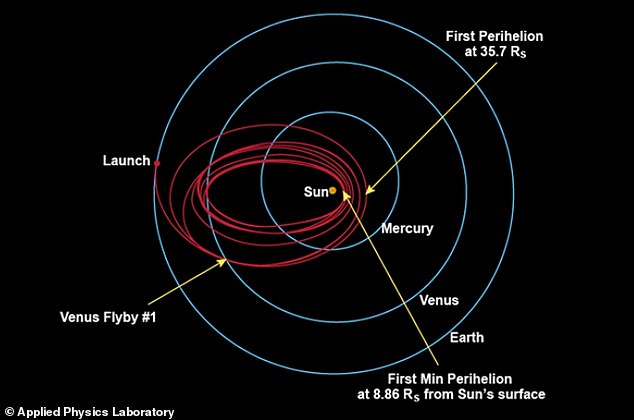 Parker launched on August 12, 2018 and is using Venus’s gravity to bend its orbit. These gravity assists allow Parker to fly closer and closer to the Sun. Each new close approach is called a perihelion. Its first Venus flyby was on October 3, 2018 and the first perihelion came on November 6, 2018 (03:27 UTC), about 35.7 Rs from the Sun. Rs stands for solar radius. 1 Rs is the distance from the centre of the Sun to its surface (about 432,000 miles or 696,000 kilometres)

It will swoop as close as 3.83 million miles to the Sun’s surface, facing heat and radiation ‘like no spacecraft before it’, NASA says.

This is well within the orbit of Mercury and about seven times closer than any spacecraft has come before.

Parker makes use of a heat shield known as the Thermal Protection System, which is 8 feet in diameter and 4.5 inches thick.

At closest approach to the Sun, while the front of Parker Solar Probe’ solar shield faces temperatures approaching 2,600°F (1,400°C), the spacecraft’s payload will be near room temperature, at about 85°F.

Mission team scientists expect to receive and process that data for analysis by the end of April.

‘We are really looking forward to these new images,’ said planetary scientist Javier Peralta, who works on Akatsuki, the Japanese space probe that’s studying the atmosphere of Venus.

‘If WISPR can sense the thermal emission from the surface of Venus and nightglow – most likely from oxygen – at the limb of the planet, it can make valuable contributions to studies of the Venusian surface.’

The fourth Venus gravity assist at the weekend sets Parker up for its eighth and ninth perihelion, slated for April 29 and August 9.

During each of those passes, Parker will break its own record when it comes approximately 6.5 million miles from the solar surface, about 1.9 million miles closer than the previous perihelion of 8.4 million miles on January 17.

Parker launched on August 12, 2018 from Cape Canaveral in Florida, and just 78 days later became the closest ever artificial object to the Sun, breaking the record set in April 1976 by the Helios 2 spacecraft (a joint venture of West Germany and NASA).

The mission is named for Eugene Parker, an American solar astrophysicist at the University of Chicago – the first NASA mission named after a living individual.

In the 1950s, Parker proposed a number of concepts about how stars – including our Sun – give off energy.

He called this cascade of energy the solar wind, and he described an entire complex system of plasmas, magnetic fields, and energetic particles that make up this phenomenon.

HOW WILL THE PARKER SOLAR PROBE GET SO CLOSE TO THE SUN?

The Parker Solar Probe mission will require 55 times more energy than would be needed to reach Mars, according to NASA.

It launched atop a United Launch Alliance Delta IV Heavy, one of the most powerful rockets in the world, with a third stage attached.

But, its trajectory and speed are critical in getting to the correct orbit.

As Earth, and everything on it, are traveling at about 67,000 miles per hour in a direction that’s sideways to the sun, craft must be launched backward to cancel out the sideways motion, NASA explains.

The Parker probe is heading past the sun, so it will need to remove about 53,000 miles per hour, according to the space agency.

The Parker Solar Probe will swing around Venus a total of seven times, with each pass slowing it down some and pushing it closer and closer to the sun. These orbits are shown in the animation above

This will require a boost from the powerful Delta IV rocket, and several gravity assists from Venus to slow it down.

The probe will rely on a series of gravity assists from Venus to slow down its sideways motion, allowing it to get just 3.8 million miles away from the sun’s surface.

‘In this case, rather than speeding up the spacecraft, as in a typical gravity assist, Venus slows down its sideways motion so the spacecraft can get close to the sun,’ NASA explains.

‘When it finally does get close, Parker Solar Probe will have lost much of its sideways speed, but gained a great deal of overall speed thanks to the sun’s gravity.

At its closest approach, it will get just 3.8 million miles from the surface of the sun, making it the only spacecraft to ever venture so close. 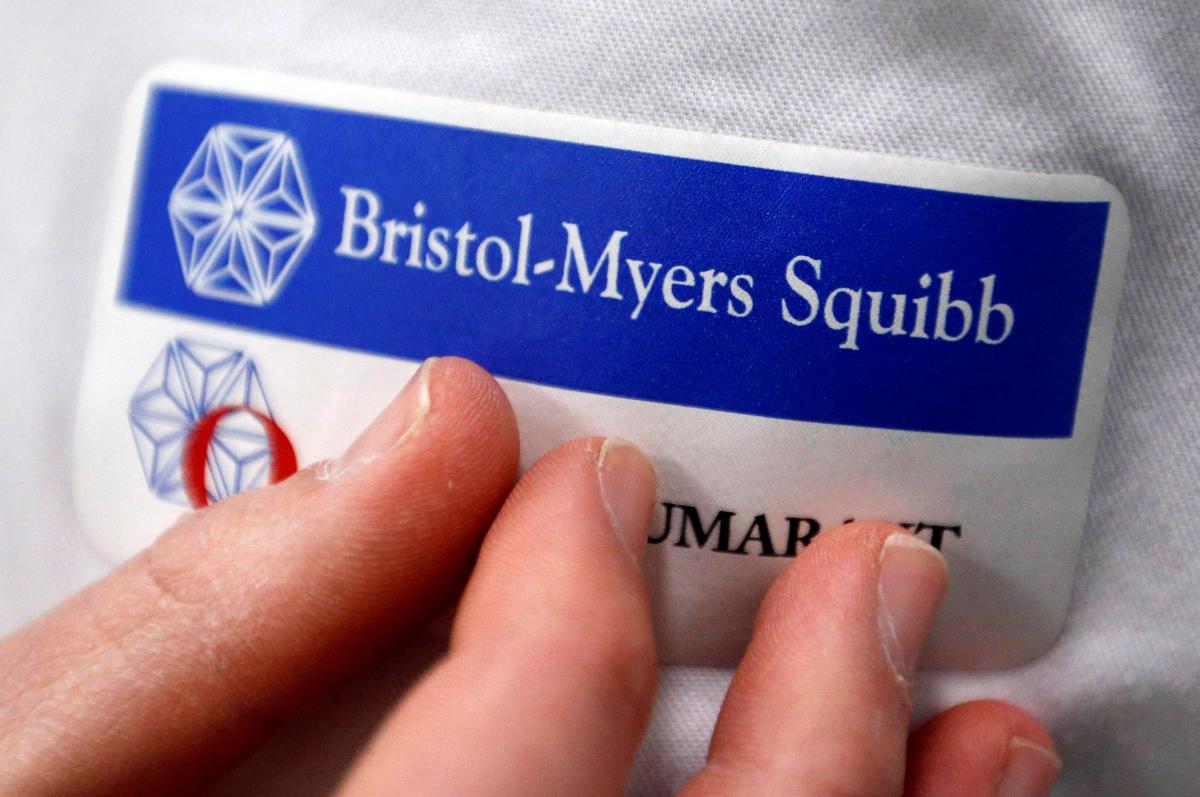 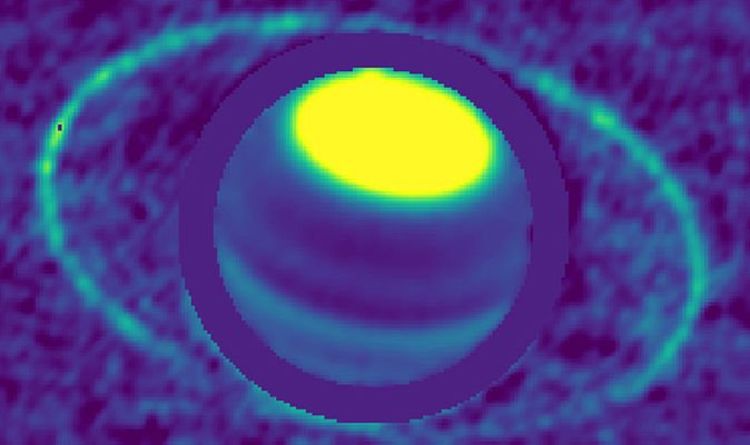 An unexplained heat wave is warming the rings of Uranus, even though the planet orbits far away from the Sun. The latest […] 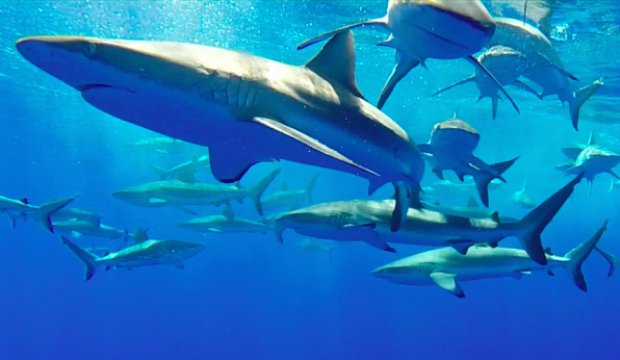 It’s long been known that sharks help nourish coral reefs, but exactly to what extent has never been scientifically mapped out — […]