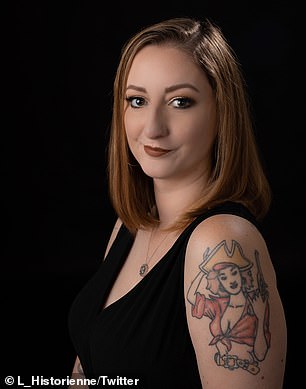 Football fans have blasted a historian’s woke op-ed which claims that the Tampa Bay Buccaneers’ name is problematic for ‘romanticizing’ cutthroat pirates.

Jamie L.H. Goodall, a staff historian at the U.S. Army Center of Military History, published her Washington Post op-ed on Friday ahead of Super Bowl LV, in which the Buccaneers faced off against the Kansas City Chiefs for the NFL championship.

‘While this celebration of piracy seems like innocent fun and pride in a local culture, there is danger in romanticizing ruthless cutthroats who created a crisis in world trade when they captured and plundered thousands of ships on Atlantic trade routes,’ Goodall wrote.

But many readers hit out at the opinion piece, with former White House Press Secretary Kayleigh McEnany blasting it as ‘pathetic’.

Goodall – who has a tattoo of a pirate on her arm – argued that the ‘murderous thieves’ and their ‘wicked deeds,’ like locking women and children in a burning church, are erased when they become ‘a symbol of freedom and adventure.’

‘These were men (and women) who willingly participated in murder, torture and the brutal enslavement of Africans and Indigenous peoples,’ she wrote. 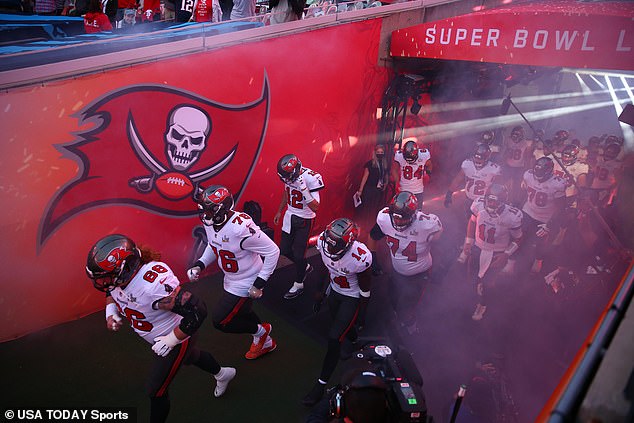 Goodall, a pirate expert, claimed that the Bucaneers team name ‘romanticized ruthless cutthroats.’ The team, pictured on Sunday, won the Super Bowl against the Chiefs 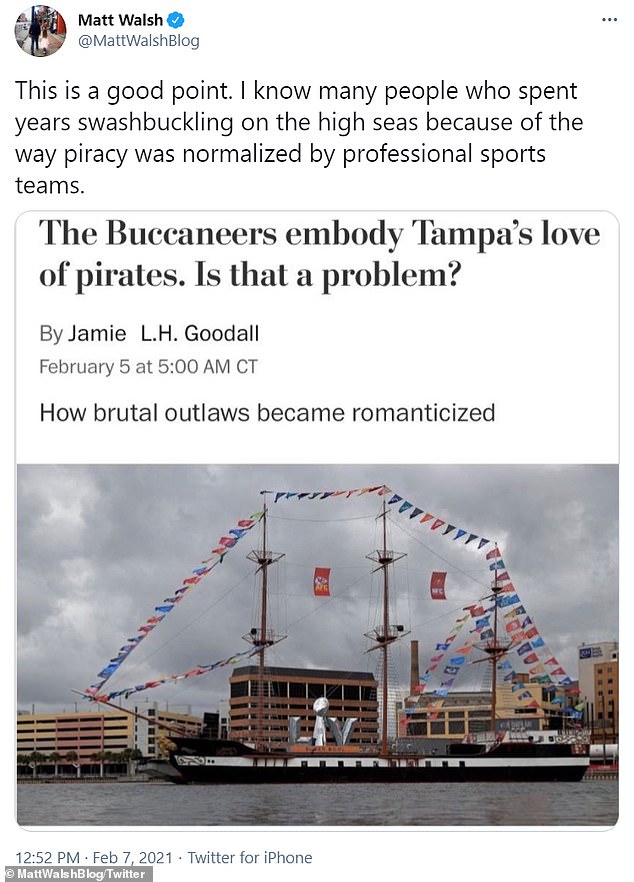 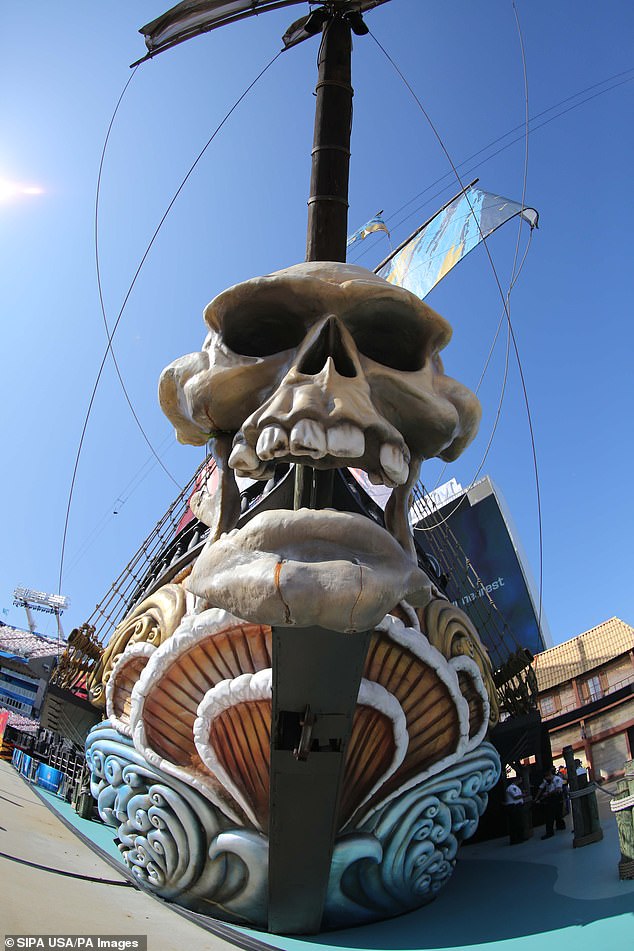 Goodall wrote that pirates ‘willingly participated in murder, torture and the brutal enslavement of Africans and Indigenous peoples.’ Pictured: the Buccaneers pirate ship ahead of the Super Bowl

Goodall, who received her ‘PhD Pirates in the Atlantic/Chesapeake/Caribbean’ from Ohio State University in 2016, has also authored books including Pirates of the Chesapeake Bay.

The historian said that word buccaneer is derived from the Arawak word buccan, an indigenous term for landless hunters on the islands of Hispaniola and Tortuga

The Arawak are a group of peoples including the Lokono of South America and the Taino, which historically lived in the Caribbean.

The word was later Anglicized to refer to a group of Caribbean outlaws ‘who operated much like Mediterranean pirates/privateers,’ Goodall wrote.

The historian told readers to consider the stories of Jose Gaspar, a Spanish pirate known as Gasparilla who ‘is still celebrated in Tampa today’ as the ‘Last of the Buccaneers.’ 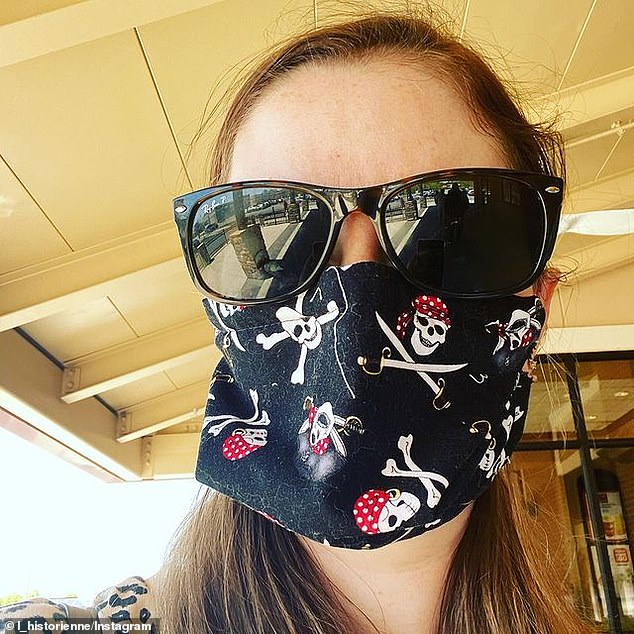 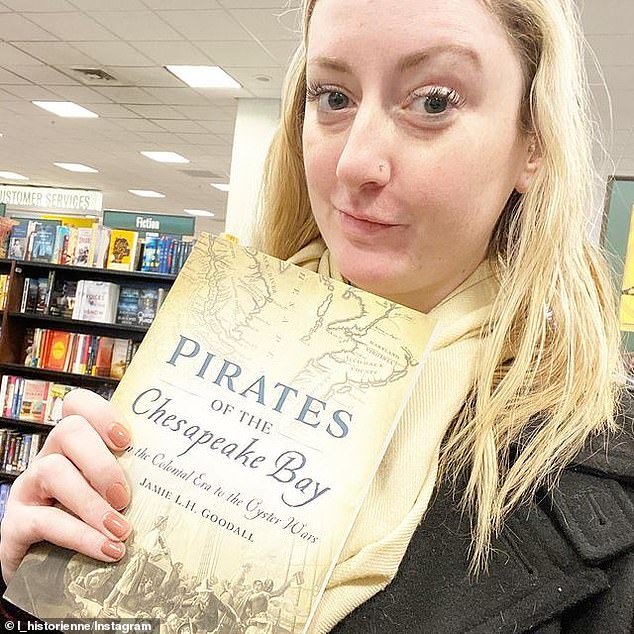 Goodall has a PhD in history and is the author of Pirates of the Chesapeake Bay, pictured

‘One story alleges that he kidnapped a 12-year-old girl for ransom and the judge made him choose between jail or the Spanish Navy,’ Goodall wrote.

There is no evidence that Gaspar even existed but he remains a popular figure in Florida folklore, and has been celebrated in the annual Gasparilla Pirate Festival since 1904.

‘So why do we celebrate individuals who were the baddest of bad guys, those whom preacher Cotton Mather once called ‘Common Enemies of Mankind?’ Goodall wrote.

‘Pirates were known murderers who pillaged, raped and plundered their way through the Caribbean. And they were well-known enslavers who dehumanized Africans and Indigenous people, selling them for profit.’

One Twitter user came to Goodall’s defense, writing: ‘I’ve been saying this about the Pittsburgh @Pirates for years. Every summer I’m triggered for 4 months straight because of the atrocities committed by pirates.’

‘But Disney made some cute movies about them so they can’t be cancelled,’ wrote @the_legit_shag. 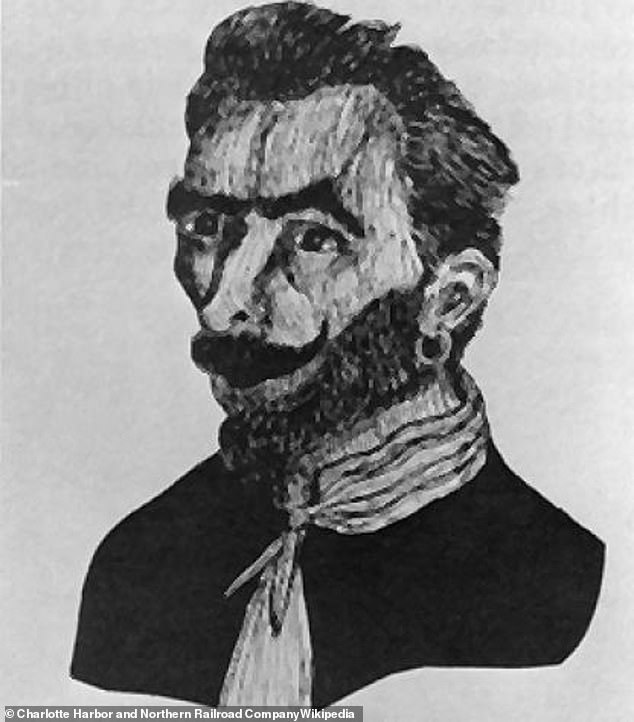 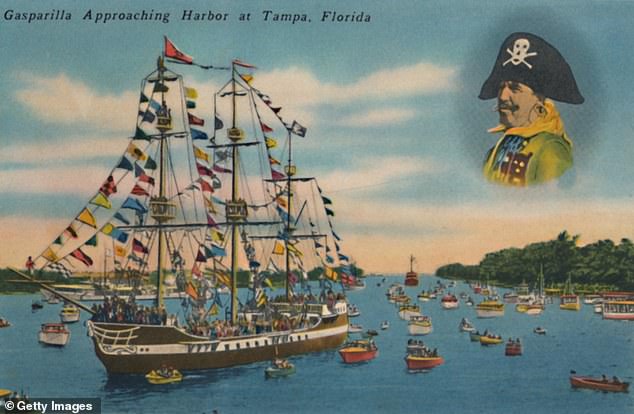 In one story, Gaspar kidnapped a 12-year-old girl for ransom – which Goodall claims proves her point about the Buccaneers team name 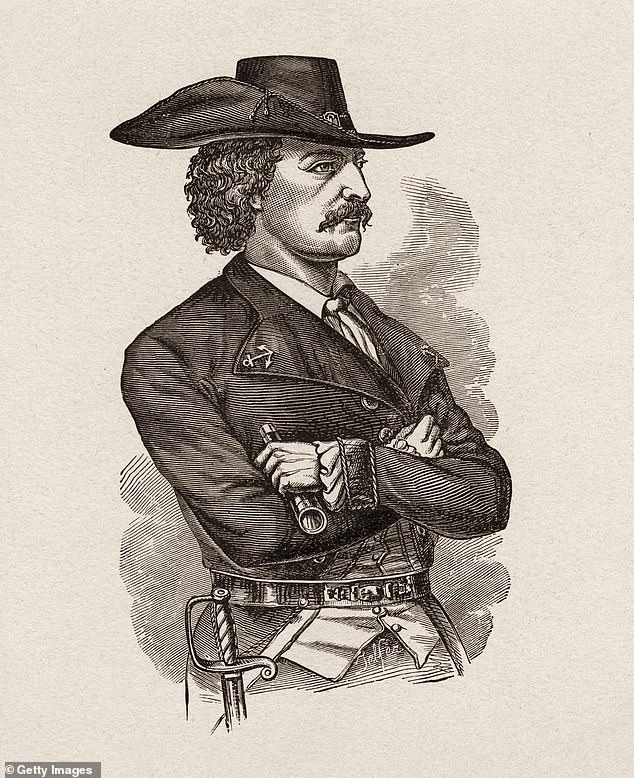 However, other Twitter users were quick to slam Goodall for the ‘desperate’ op-ed.

Kayleigh McEnany, the former White House Press Secretary under President Donald Trump, wrote: ‘This is pathetic… even for the Washington Post. Go find something else to cancel and complain about! Leave Tampa & the Buccaneers alone.’

Tim Murtagh, a former Trump campaign spokesman, wrote: ‘On Super Bowl Sunday, the @washingtonpost is here to remind us that ‘normalizing pirates’ is problematic.’

‘So, if the Tampa Bay Buccaneers are not cancelled, soon we will all be tolerating raiding galleons, plundering coastal towns, and swashbuckling,’ Murtagh wrote.

Others like @SEBCTink tried to school the pirate expert on swashbuckler history, noting that the United States ‘actually licensed and created ‘pirates’ to harry Colonial ships during the Revolutionary War?’

‘Growing up on the Texas Gulf Coast, we were taught in school that Jean Lafitte was a hero,’ wrote @RumpoleBayou — referring to the French pirate and privateer who operated in the Gulf of Mexico in the early 19th century and founded the colony on Texas’ Galveston Island. 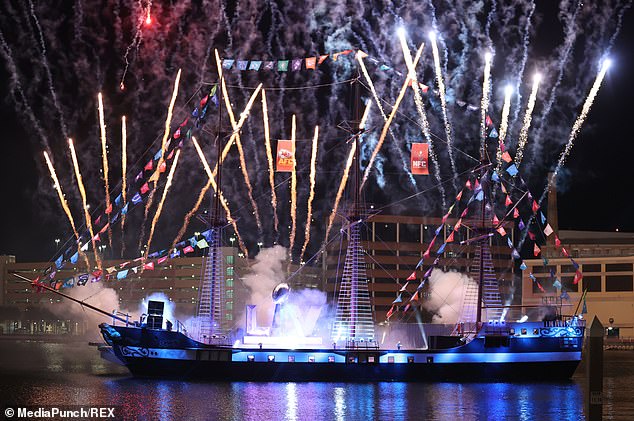 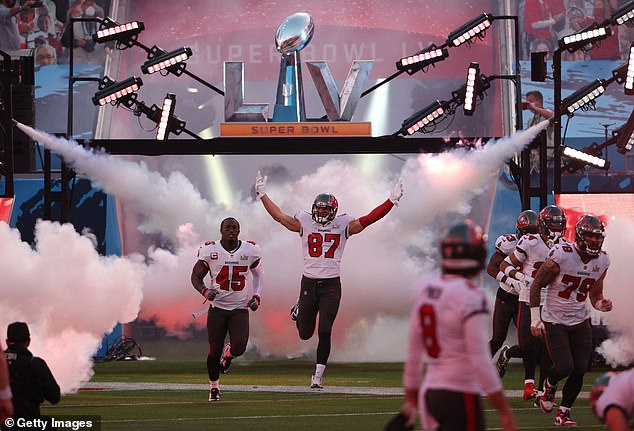 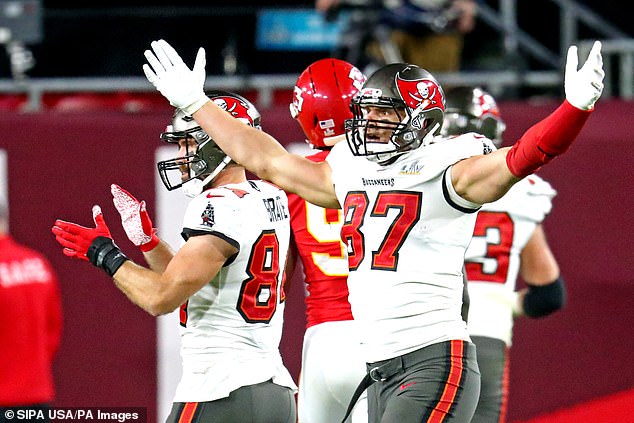 Twitter user @JohnnyCorvette quipped: ‘Well, I’m rooting for a team of ruthless cutthroats in hopes they can capture and plunder.’

Another football fan, who admitted to not rooting for the team, said ‘99.99% of the world understands that Pirate in Tampa is being used in fun.’

‘They think of “Captain Jack Sparrow.” Sorry, but it’s true. Nobody wakes up in the middle of the night thinking about history screaming “Oh No Pirates!” wrote @stand_george.

Others appeared to point at hypocrisy, noting that Goodall has an ‘enormous pirate tattoo’ visible in her photos on social media.

‘[It] is a pretty remarkable marker of just how alien the current culture has become,’ one person tweeted.

‘More worrisome than Tampa’s love of Pirates, is the degree to which the Devils embody New Jersey’s obsession with Satan. Are these people even human?’ wrote @jlwdixon.

Goodall later noted that the ‘trolls’ appeared to have been sent her way by conservative blogger Matt Walsh after she ‘p****d off the Cancel Culture crowd’ with her piece.

‘This is a good point. I know many people who spent years swashbuckling on the high seas because of the way piracy was normalized by professional sports teams,’ Walsh tweeted.

The blistering criticism comes as sports teams across the country are addressing names that are now seen as offensive.

Washington D.C.’s football team dropped its Redskins name last year, and have looked to address racism with their names and mascots.

The Kansas City Chiefs, who battled against the Buccaneers in the Super Bowl, have faced criticism for their own ‘racist’ name. 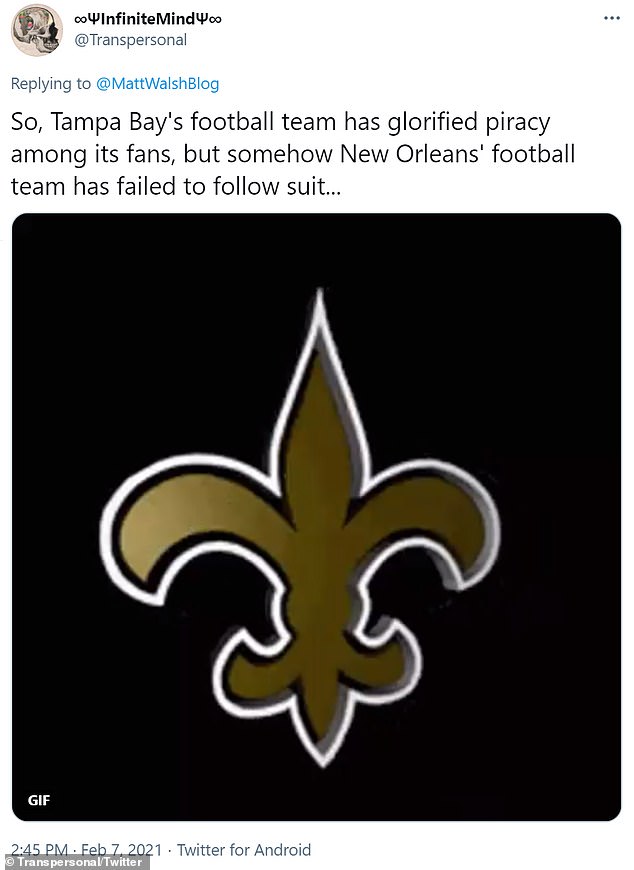 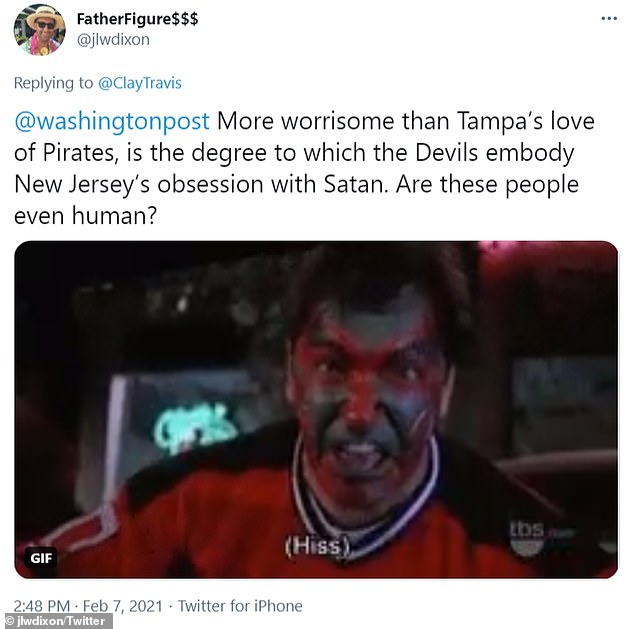 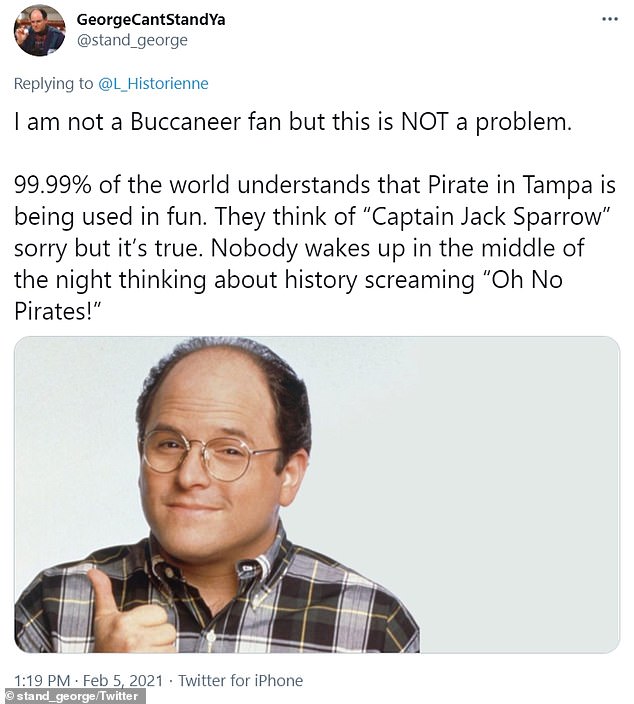 The Florida Indigenous Rights and Environmental Equality, a Native American rights group, planned to protest for the Chiefs to retire its name ahead of the Sunday game, CBS News reported.

‘The Indigenous people of this land have already had a mass genocide approach with regard to their culture and way of living,’ said the group’s co-founder Alicia Norris.

‘And when you further dehumanize them and objectify them, it just kind of falls in line with that extinction of who they are.’

Last month, it was revealed that the University of Nevada Las Vegas would retire its ‘Hey Reb!’ mascot that was inspired by the ‘Western trailblazers of the 1800s’ after accusations it celebrated the Confederacy.

UNLV President Keith E. Whitfield wrote an update letter to students on Tuesday that ‘for all intents and purposes, the Hey Reb! mascot has been retired since last spring’ and that there are no plans to bring it back or create a new one.

‘My predecessor, President Marta Meana, essentially addressed this issue late last spring when she had a statue of the mascot removed from the main campus,’ Whitfield said. 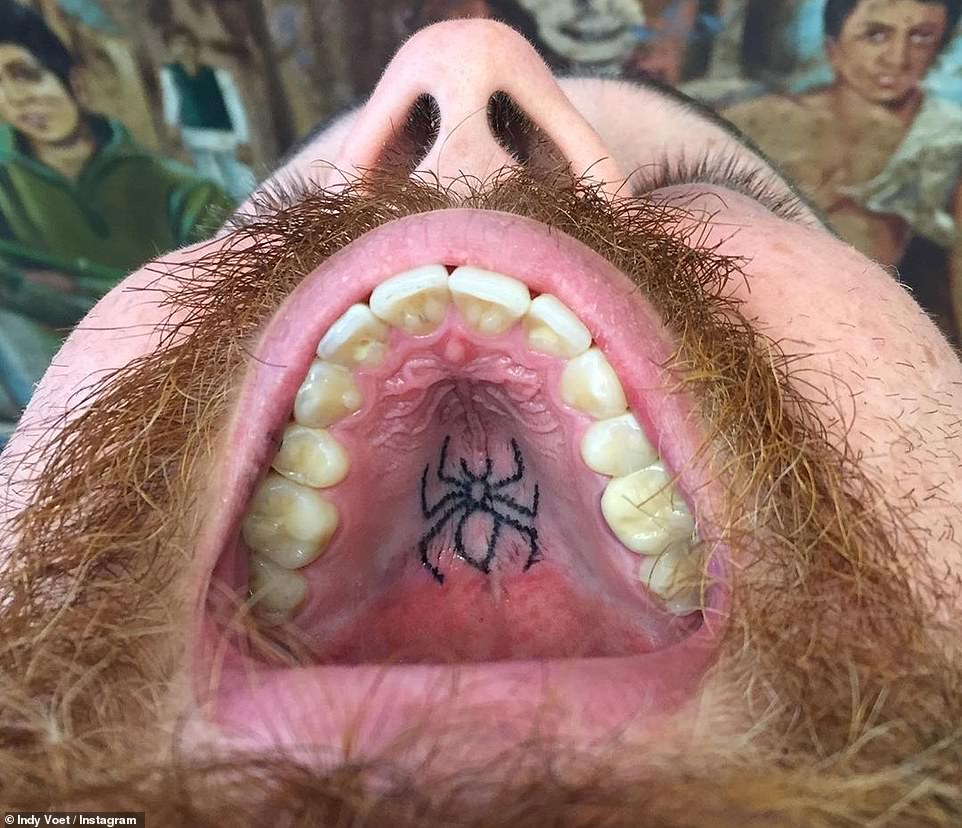 A tat-toothy smile! Artist who specialises in tattooing the roof of people’s MOUTHS shows off his unique artwork Tattoo artist Indy Voet […]

THREAT: There are fears Russia could have more nuclear missiles, like this one (Image: TASSvia Getty Images) But if you thought 2019 […] 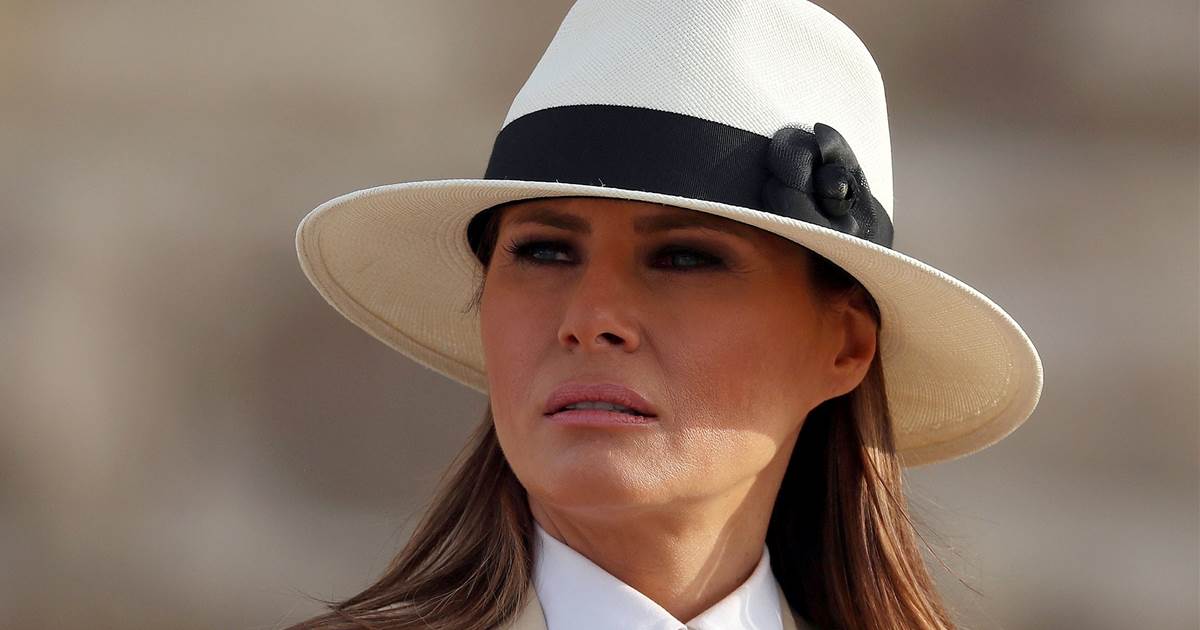 Breaking News Emails Get breaking news alerts and special reports. The news and stories that matter, delivered weekday mornings. SUBSCRIBE When it […]