Alabama Rep. Mike Rogers and Florida Rep. Mike Waltz both hit out at Psaki Tuesday for what they described as a ‘disgraceful’ quip about the newest branch of the military where she joked it was ‘the plane of today’.

Psaki also managed to ruffle more feathers in the briefing room Tuesday when she hit out at a Politico reporter accusing her of ‘putting words in my mouth’ over the White House’s China strategy.

This came after it emerged the press secretary has been trying to find out questions  from reporters in advance of her press briefings in the two weeks since Joe Biden took office. 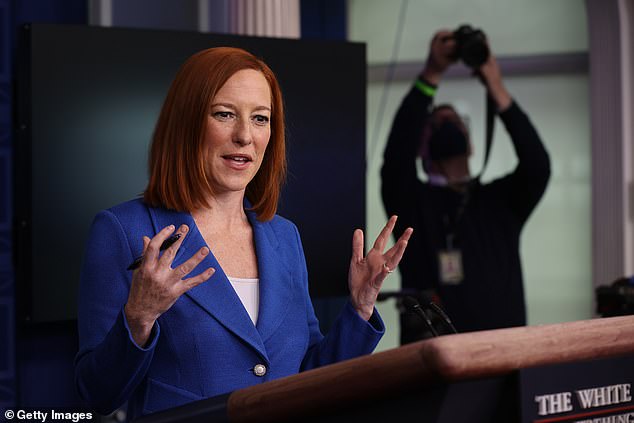 Psaki was asked in Tuesday’s press briefing about Joe Biden’s plans for the future of the Space Force, the nation’s security space branch which was signed into law in December 2019.

She made light of the question appearing to compare it to previous questions about whether the new president will update the color scheme of Air Force One.

‘It is an interesting question. I am happy to check with our Space Force point of contact.

‘I’m not sure who that is. I will find out and see if we have any update on that.’

Her joke didn’t amuse the GOP congressmen who slammed her for using the ‘military as the punchline of a joke’.

Rogers, the top GOP member of the House Armed Services Committee, blasted Psaki calling her comments ‘concerning’ and saying she should ‘immediately apologize.’

‘It’s concerning to see the Biden administration’s press secretary blatantly diminish an entire branch of our military as the punchline of a joke, which I’m sure China would find funny,’ he told Politico.

‘The Space Force was passed with near unanimous support in Congress, the same type of ‘unity’ President Biden is supposedly working towards. 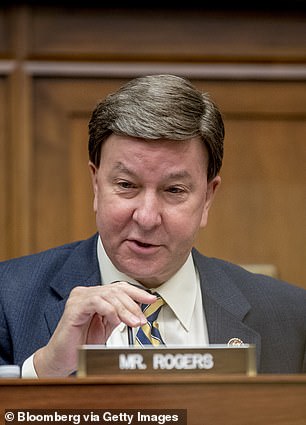 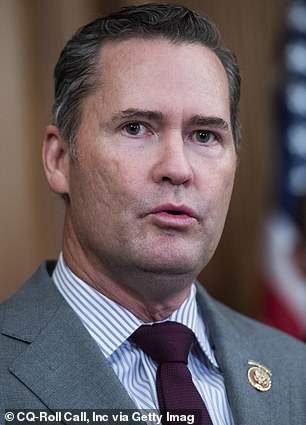 Alabama Rep. Mike Rogers (left) and Florida Rep. Mike Waltz (right) both hit out at Psaki Tuesday for what they described as a ‘disgraceful’ quip about the newest branch of the military where she joked it was ‘the plane of today

Waltz, who is a founding member of the House Space Force Caucus, also hit out at Psaki saying it showed the new Biden administration is not taking China seriously

‘Jen Psaki needs to immediately apologize to the men and women of the Space Force for this disgraceful comment.’

Waltz, who is a founding member of the House Space Force Caucus, also hit out at Psaki saying it showed the new Biden administration is not taking China seriously.

‘This is just another example of the Biden administration not taking China seriously while demeaning the incredible work of Space Force personnel,’ Waltz told Politico.

He also posted footage of Psaki’s comments on Twitter alongside a warning that the Space Force is needed to protect the US from China.

‘While the Biden Administration continues to think about whether or not the #CCP is a threat, China is working overtime to become the dominant force in space,’ he tweeted.

‘We need the professionals, ‘SpaceDoD, to keep American’s safe.’

While not directly commenting on the backlash, Psaki tweeted later Tuesday evening to describe the Space Force as ‘important work’.

‘We look forward to the continuing work of Space Force and invite the members of the team to come visit us in the briefing room anytime to share an update on their important work,’ she wrote.

It is not yet clear what the new administration has planned for the Space Force but experts believe the military branch will continue under Biden’s watch, reported Politico.

The US Space Force is an independent military service branch, dedicated to focusing on missions and operations in the space domain.

Its mission is to organize, train, and equips space forces to protect the US in space.

The branch was signed into law as part of the 2020 National Defense Authorization Act in December 2019.

This came after then-President Donald Trump directed the Pentagon to begin planning for a Space Force the previous year. 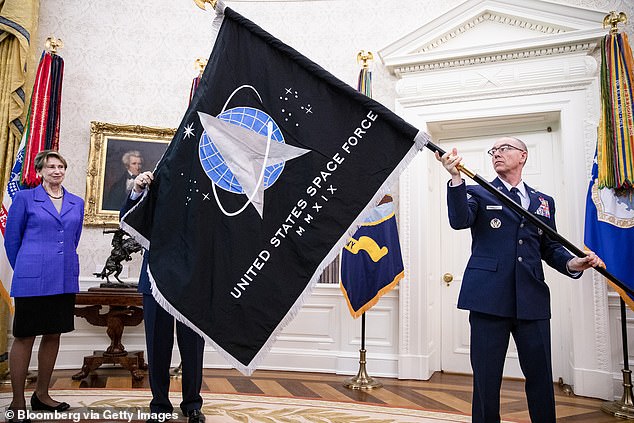 The US Space Force is an independent military service branch, dedicated to focusing on missions and operations in the space domain

However while the branch was created under Trump and he often plugged it at rallies, the idea to set up a Space Corps had actually been put forward by a bipartisan group of lawmakers in 2017.

The backlash over Psaki’s comments came after she also clashed with a reporter in Tuesday’s press briefing over the US’s relationship with China.

Psaki was asked by Anita Kumar if Biden has scheduled a call yet with Chinese President Xi Jinping as the president has spoken with several world leaders, including Russian President Vladimir Putin.

Psaki said a call was not scheduled and that the White House was still planning its approach to China.

Kumar replied suggesting a strategy was already in place.

‘That sounds a lot like the strategy is not to talk to him at this time because you’re talking about speaking to allies and making other calls first,’ she said.

‘Have they requested a call?’

Psaki appeared to be rattled by the question firing back: ‘I don’t have anything more for you. I don’t appreciate the putting words in my mouth.

‘That wasn’t what my effort was. What I was conveying is our strategy here, from the United States, which is to work with our partners and allies and determine what the right time is.’

Earlier Tuesday, it emerged that Psaki has been asking for preview questions from reporters – despite promising ‘transparency in the White House’s dealings with the press, according to the Daily Beast.

The attempts to probe for what she will be asked at the on-camera briefings caused such concern that it was raised at a private meeting of the White House Correspondents Association, the Beast reported.

Multiple sources said leaders of the White House Correspondents Association, a group dedicated to maintaining journalists’ access to the executive branch of government, advised reporters to push back against any of these requests from Biden’s press team or to not reply. 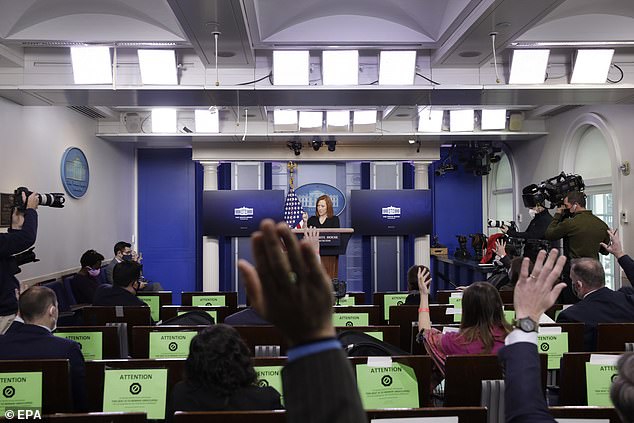 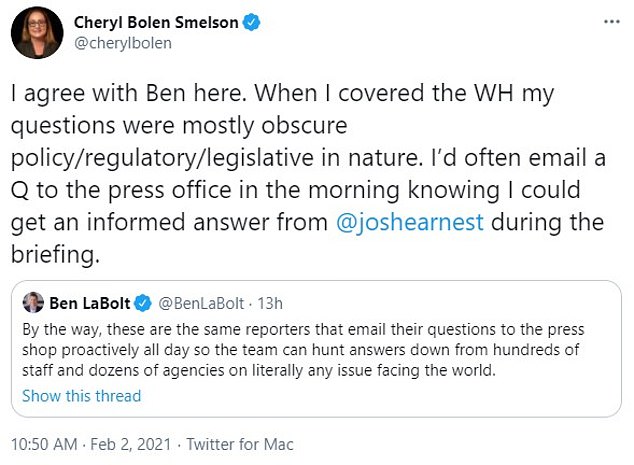 The revelations sparked a debate among journalists who cover the White House, with some claiming it’s improper and other’s maintaining it’s normal protocol among political press teams

‘Our goal is to make the daily briefing as useful and informative as possible for both reporters and the public,’ a White House spokesperson told DailyMail.com.

‘Part of meeting that objective means regularly engaging with the reporters who will be in the briefing room to understand how the White House can be most helpful in getting them the information they need.’

The official added: ‘That two-way conversation is an important part of keeping the American people updated about how government is serving them.’

The revelations sparked a debate among journalists who cover the White House, with some claiming it’s improper and other’s maintaining it’s normal protocol among political press teams.

‘To everyone asking why this matters: If Psaki doesn’t like your question, she doesn’t call on you,’ Politico reporter Tara Palmeri posted to Twitter.

In Psaki’s first week-and-a-half as White House press secretary, she has called on every reporter seated in the briefing room – sometimes more than once.

Other reporters downplayed the disclosure, and said these protocols are not out of the norm for past administrations and that in pre-Trump White House there had been informal off-camera questions to the press secretary in a ‘gaggle’ which meant they had insight into the issues reporters were likely to push. 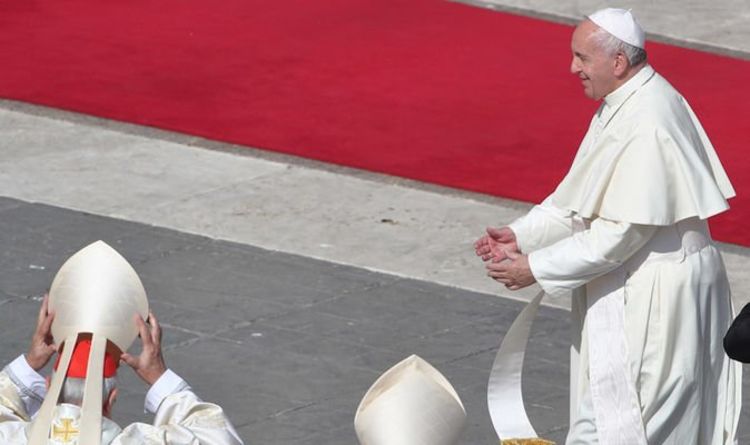 Sir David Amess, MP for Southend West, told the house the Pontiff was asked if her “would pray for a miracle so […] 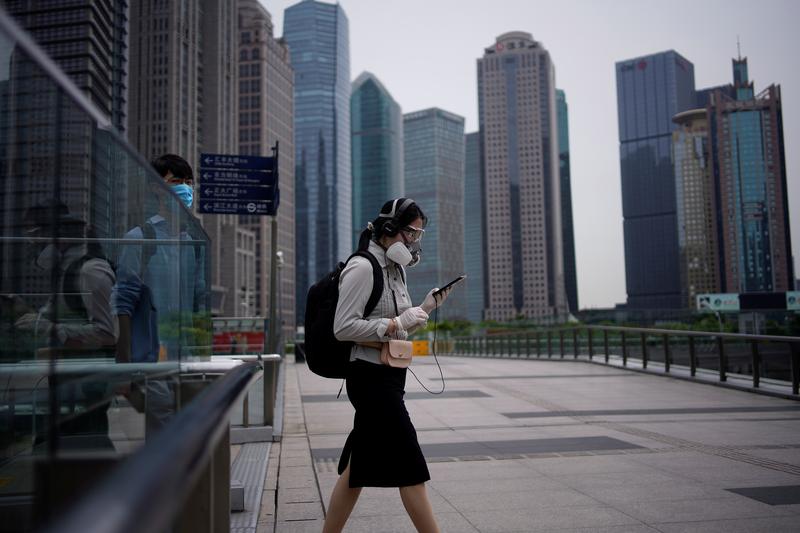 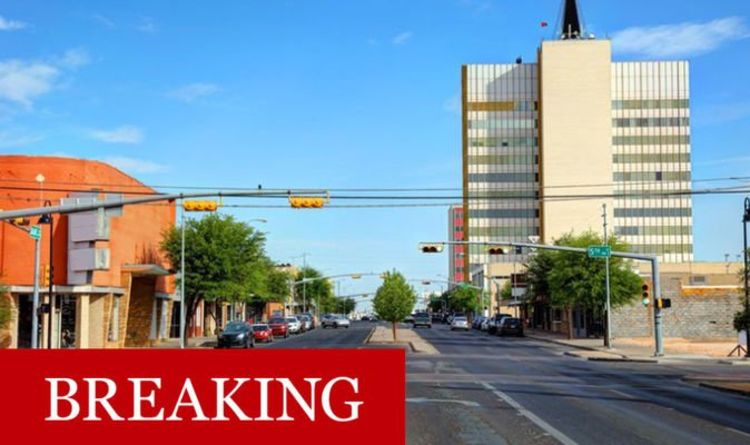 The attack began on Saturday afternoon and reports say the shooter, or shooters, started randomly firing at people in Odessa and Midland. […] 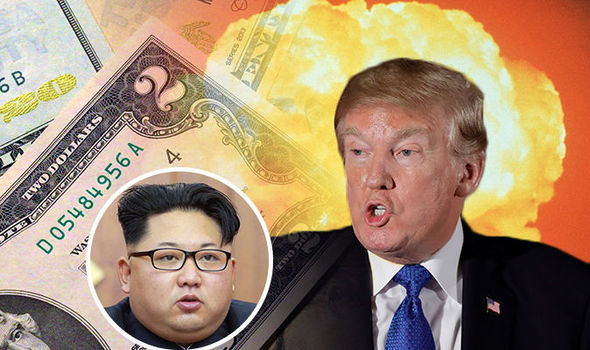