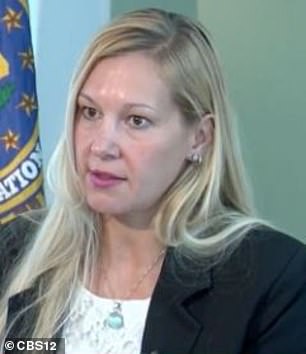 Special Agent Laura Schwartzenberger (pictured in a CBS12 interview) and Special Agent Daniel Alfin were shot dead in Sunrise, just outside Fort Lauderdale, this morning while serving the warrant in a case involving ‘violent crimes against children’.

A child pornography suspect in Florida lay in wait for FBI agents who he observed through his doorbell camera before opening fire, it has emerged.

The shooting unfolded at an apartment complex where the man suspected of possessing child pornography lived.

On Tuesday evening The Miami Herald reported that he had ambushed the officers, observing them through the door before shooting them dead.

The day was in the most lethal incident for the FBI in 35 years, since a shootout between bank robbers and agents in Miami left two agents dead and five wounded in 1986.

The suspect was found dead on Tuesday after barricading himself inside the apartment and opening fire on the agents with an assault-style rifle, law enforcement sources told The Miami Herald.

‘There are several huge holes in the door going outward,’ one law enforcement official said.

Law enforcement sources say it appears the suspect killed himself.

In the hours after the shooting, the bodies of Schwartzenberger and Alfin were placed on stretchers and draped with American flags as they were escorted into the Broward Medical Examiner’s office. 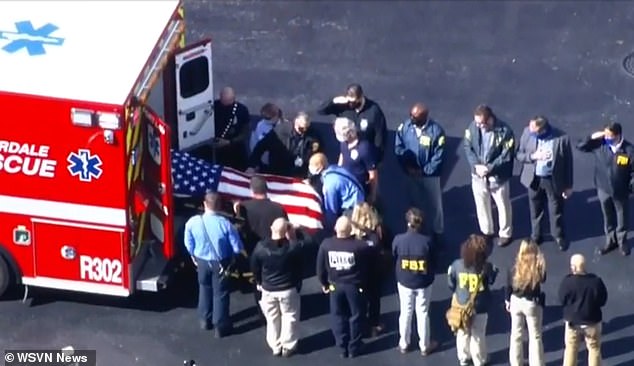 Two FBI agents were shot dead in Sunrise, Florida this morning as they served a warrant in a child exploitation case. One of the slain agents is pictured above on a flag-draped stretcher arriving at a medical examiner’s officer surrounded by law enforcement 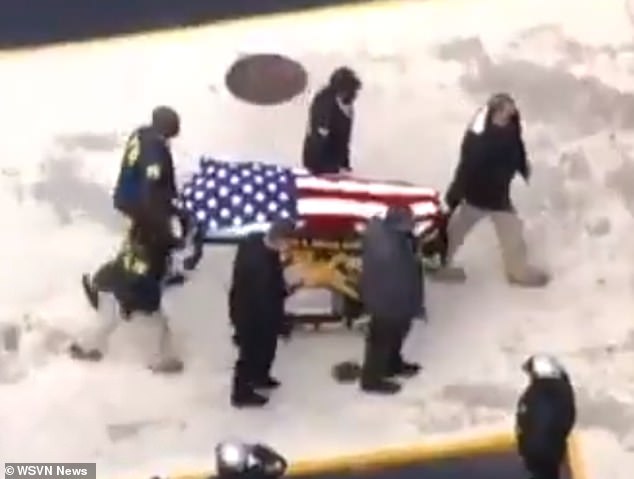 Footage from WSVN showed officers forming an honor guard as their bodies were taken inside.

‘My heart aches for the families,’ he said in a press briefing on Tuesday evening.

‘I have not had an opportunity, nor will I try today to contact them but they put their lives on the line, and it’s a hell of a price to pay.’

FBI director Christopher Wray praised the two murdered agents for their ‘heroism’ and vowed to ‘honor their ultimate sacrifice’.

‘Tragically, the FBI lost two of our own today,’ he said.

‘Special Agent Daniel Alfin and Special Agent Laura Schwartzenberger were shot and killed this morning in the line of duty while executing a federal court-ordered search warrant in a crimes against children investigation.

‘The FBI will always honor their ultimate sacrifice and will be forever grateful for their bravery.’

Three other agents were injured in the standoff with the suspect. Two of the injured agents are in stable conditions in hospital. The third agent did not need to be hospitalized, Wray said. 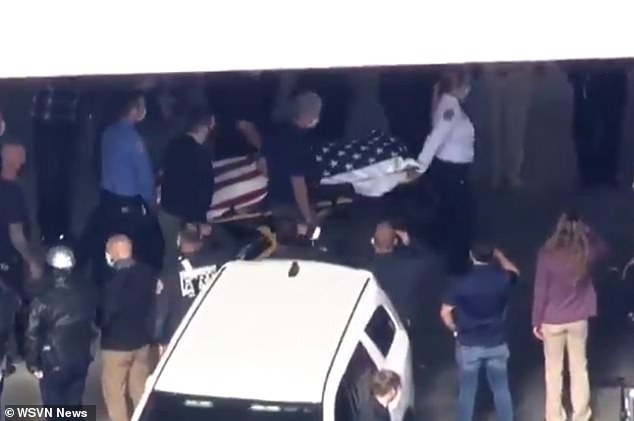 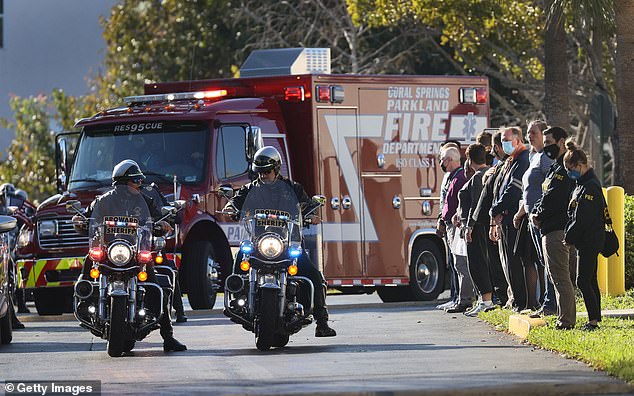 Schwartzenberger started with the bureau in 2005 and worked out of the Miami office with the violent crimes against children unit. 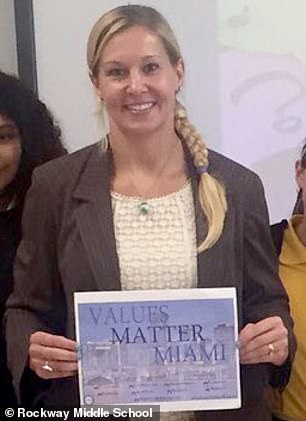 The agents had been serving a federal court-ordered search warrant at the time in connection with a case involving child pornography and violent crimes against children, according to FBI Miami Special Agent Michael D. Leverock and FBI Agents Association President Brian O’Hare.

The FBI did not release the suspect’s name or provide any further details on his suspected crimes.

A law enforcement source told the Miami Herald that the FBI had been investigating the suspect alongside Fort Lauderdale federal prosecutors.

Authorities say the FBI had found an IP address for the suspect’s computer on an internet service provider.

When agents arrived at his home, the suspect barricaded himself inside before opening fire.

The confrontation marked one of the bloodiest days in FBI history in South Florida and among the deadliest nationally as well, according to the FBI website. 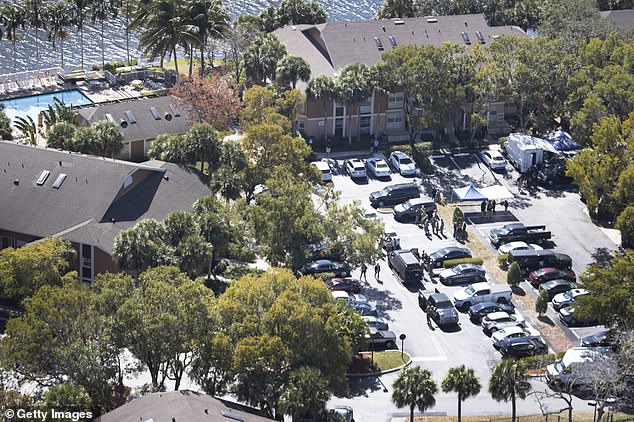 The shooting unfolded at an apartment complex, pictured above, where the man suspected of possessing child pornography lived 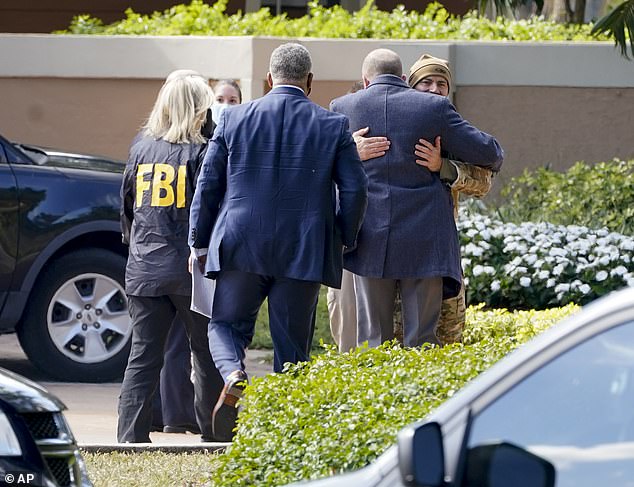 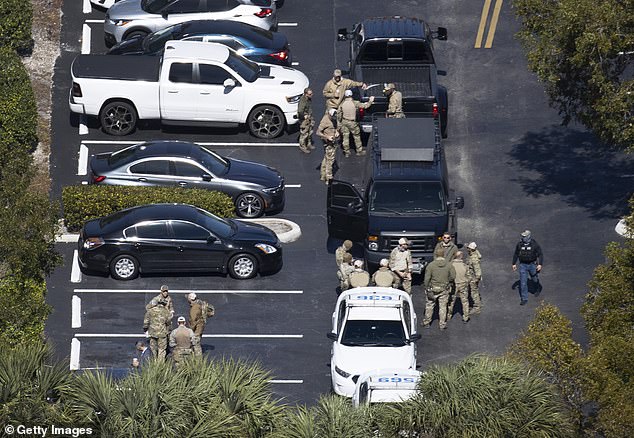 The shooting happened around 6am in a middle-class neighborhood of single family homes, duplexes and apartment buildings.

The gunfire erupted with about four shots, according to Julius McLymont, whose house borders the Water Terrace apartment complex where the suspect was barricaded.

McLymont told the Associated Press that he initially thought the gunfire was a car backfiring but heard about five more shots a few minutes later.

He went outside and looked over his fence as police cars and ambulances rushed in. He said he saw officers working on someone lying on the ground before they loaded the person into an ambulance.

A SWAT team arrived and officers in riot gear went around the building, yelling, ‘Go, go, go!’ McLymont said. He said he couldn’t see the apartment where the shooting happened from his location.

Hours later, Sunrise Police urged residents of Water Terrace to remain inside their homes while law enforcement blocked the entrances to their community. 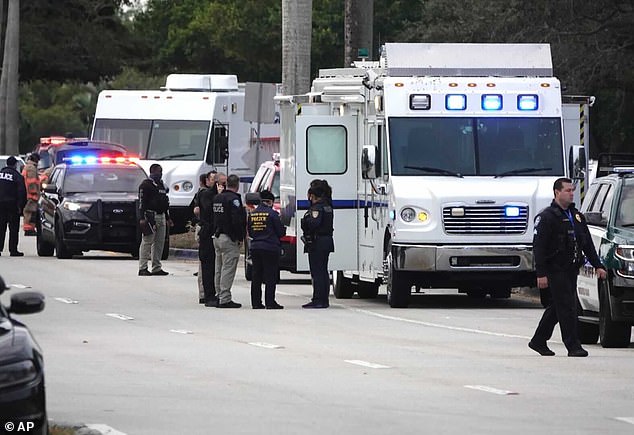 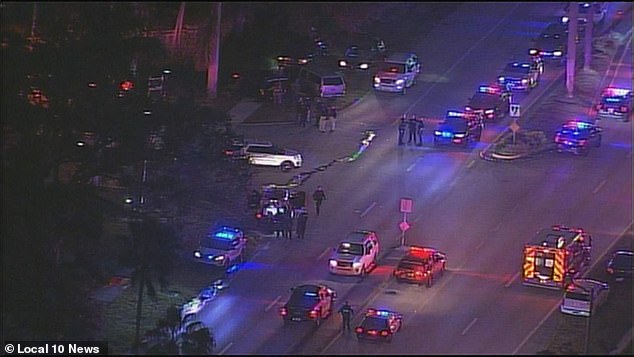 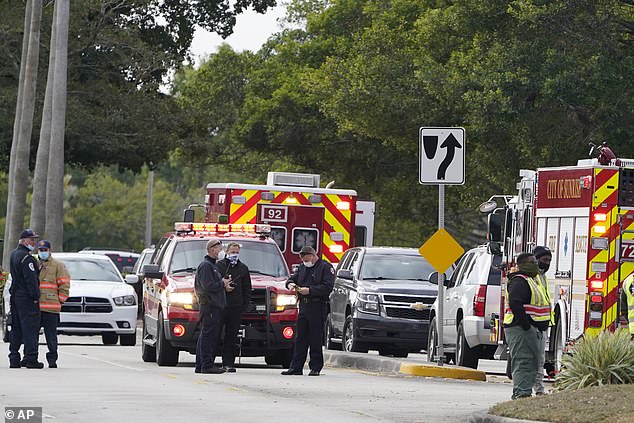 Five agents in total were shot, including the two that died. Law enforcement officers are pictured blocking an area where the shooting unfolded

The FBI said the investigation into the shooting is still ongoing.

‘In accordance with FBI policy, the shooting incident is under investigation by the FBI’s Inspection Division,’ the FBI said in a statement.

‘The review process is thorough and objective and is conducted as expeditiously as possible under the circumstances. No further information will be released at this time.’

Alex Piquero, a University of Miami sociology professor who has specialized in criminology, said serving search warrants at a person’s home is incredibly hazardous for law enforcement officers.

‘Serving warrants, next to domestic dispute calls and high speed chases, are among the most dangerous for law enforcement – they don´t know what awaits them on the inside,’ Piquero said.

There have been several other shootings throughout the FBI’s history in which two agents have died, according to the bureau’s Wall of Honor.

In South Florida, the infamous ‘Miami Shootout’ in 1986 claimed the lives of Agents Ben Grogan and Jerry Dove in a gun battle with two heavily armed robbery suspects who were also killed. Five other FBI agents were wounded in that shooting, which led the bureau to upgrade the weapons that agents carry. 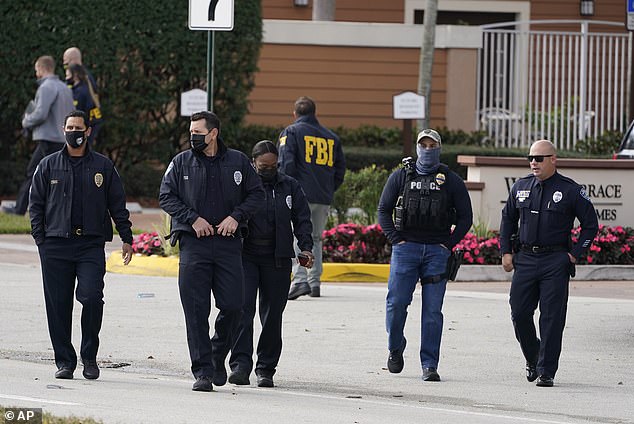 Multiple law enforcement agencies, including the SWAT team, are still gathered at the scene of the shooting 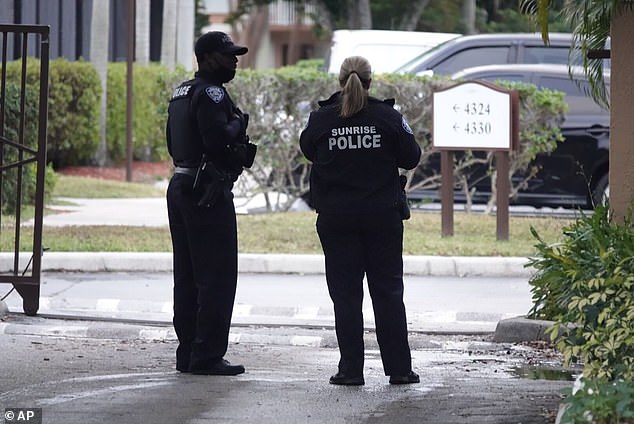 The Sunrise Police Department tweeted about the heavy police presence, noting that several roads were closed in the area 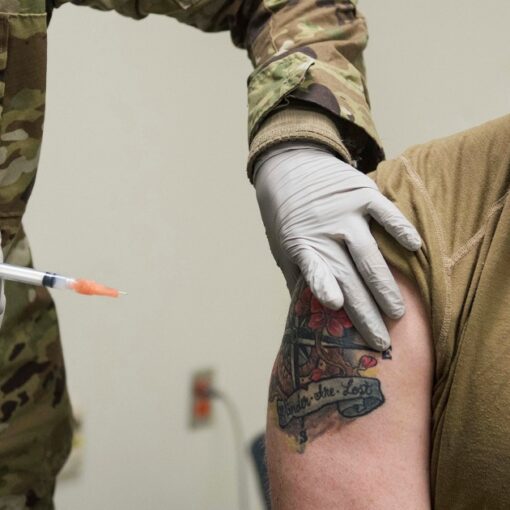 The Air Force has discharged 27 active-duty members who refused to get vaccinated against Covid-19 as required, a spokesperson said Monday. The […] 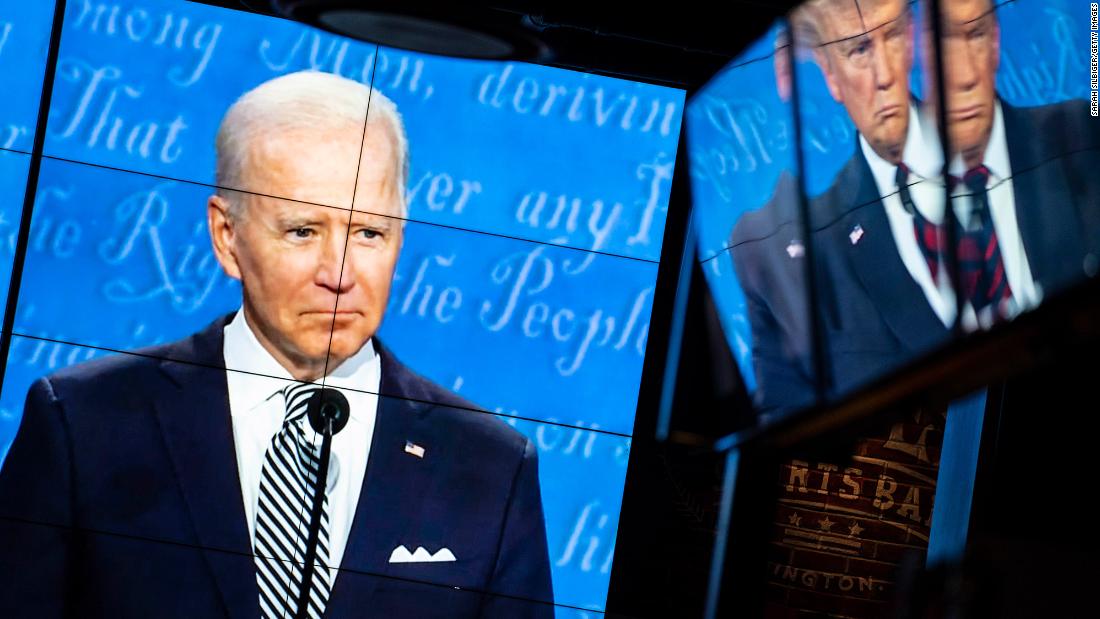 Both criticized the other for being too soft on Beijing, with Trump accusing Biden of being hoodwinked by China during his time […] 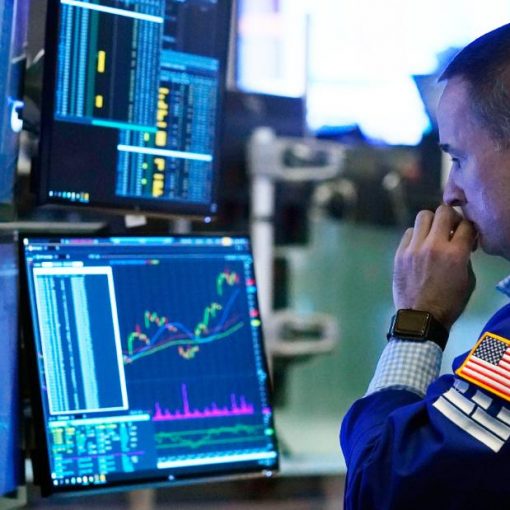 Stocks have been extremely choppy in September, as investors grappled with an abundance of issues: high inflation expectations, rising bond yields, the […] 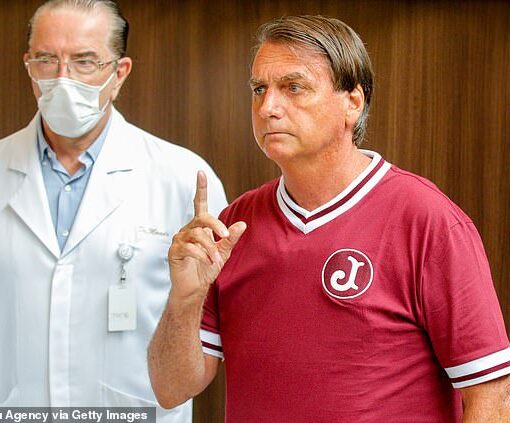 Brazil’s President Jair Bolsonaro was released from hospital on Wednesday, two days after being rushed for emergency treatment of a blocked intestine. […]