Technology’s elite sees the world in different light to other ultra-wealthy business leaders outside the tech industry, according to a new study.

German and US researchers investigated the worldviews of the 100 richest people in the tech world, as listed by Forbes.

Included were leaders of ‘the big nine’ – Amazon, Google, Facebook, Tencent, Baidu, Alibaba, Microsoft, IBM and Apple – whose founders are some of the richest people on the planet.

The research, which involved analysing the language used in the tweets of prominent figures in tech, revealed that they tend to deny any links between democracy and money.

Tech’s elite also has a more ‘meritocratic’ worldview – whereby people’s success or power is related to their abilities – compared with the general US Twitter-using population. 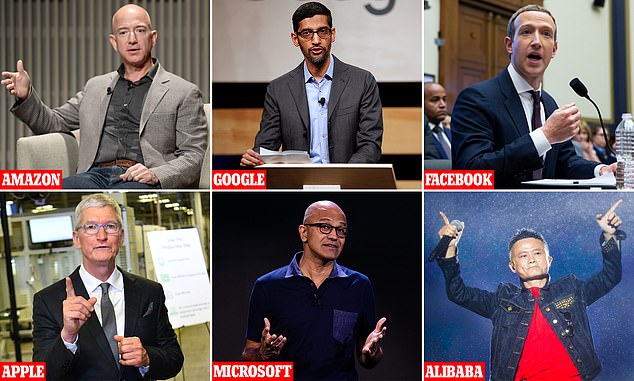 The tech elite share distinct views setting them apart from other segments of the world’s elite, according to the study, which took into account the world’s richest tech leaders. From top left going clockwise: Jeff Bezos of Amazon, Sundar Pichai of Google, Mark Zuckerberg of Facebook, Jack Ma of Alibaba, Satya Nadella of Microsoft and Tim Cook of Apple

‘Our research contributes to closing a research gap in societies with rising inequalities,’ say the study authors, from two German universities and the Ralph Bunche Institute for International Studies in New York.

‘We find that the 100 richest members of the tech world reveal distinctive attitudes that set them apart both from the general population and from other wealthy elites.

‘As a group, they are meritocratically inclined, concerned with the well-being of their fellow human beings and relatively supportive of democratic society.

‘Yet their position in a democratic system is contradictory – as a result of their enormous wealth, they have disproportionate influence over how discretionary income is spent.’

A shift in the global economy has taken place over the past half-century, marked by the rise of big tech companies and the so-called ‘big nine’.

But aside from the dominant tech giants, the industry has spawned smaller computer hardware and software manufacturers and more recently app companies. 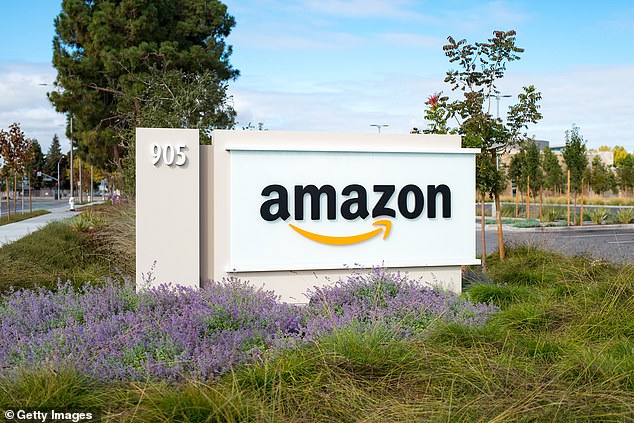 Those on the Forbes list made their money primarily in computer software, hardware, and internet-related technologies and services. Founders, executives, and investors in such companies as Facebook, Google, Amazon, Airbnb, eBay, and Microsoft are prominently represented

For their study, researchers had initially approached all 100 of the 100 richest people in the tech world for face-to-face interviews.

However, after receiving underwhelming responses, they turned to the internet to learn more about their subjects in their own words.

They scraped and analysed 49,790 tweets from the 30 verified Twitter account holders, as well as the same number of tweets from a random sample of the general US Twitter-using population for comparison.

These statements were compared to other super-rich elites not associated with the tech world who signed the Giving Pledge, including Warren Buffett, Michael Bloomberg, Sara Blakely and David Sainsbury.

Global clusters of tech wealth. Silicon Valley, on the west coast of the US, is very well-represented

The Twitter text analyses revealed the tech elite subjects tweeted with a greater emphasis on disruption, positivity, and temporality – a strong sense of existing within time – compared with the average user.

Their most frequently used words were ‘new’ and ‘great’ compared to the chattier ‘just’ and ‘like’ as the most common words used by the general users.

Tech’s elite also tended to refer much more frequently to their peers and other tech companies.

Researchers also measured the prevalence and use of words relating to ‘merit’ and ‘democracy’.

‘We use a common “bag-of-words” model (BOW) which focuses on the frequency of the occurrence of words but ignores context and grammar,’ the team say.

The approach uses the assumption that the more often people use certain words, the more they are important to them.

Experts found no statistically significant differences in the tech elite’s view of the relationship between power and money or power and democracy, as compared to the general Twitter sample.

But tech elites denied a connection between democracy and money, a belief not shared by the ordinary Twitter users sampled.

This essentially reflects a complicated relationship between democracy and money in the world of a tech leader.

‘They speak with a forked tongue when it comes to providing financial resources and place them under democratic governance in order to make democracy work.

‘Take taxation versus philanthropy as an example – they like to give away something, but they want to decide what for. And they do not like paying taxes so much.’ 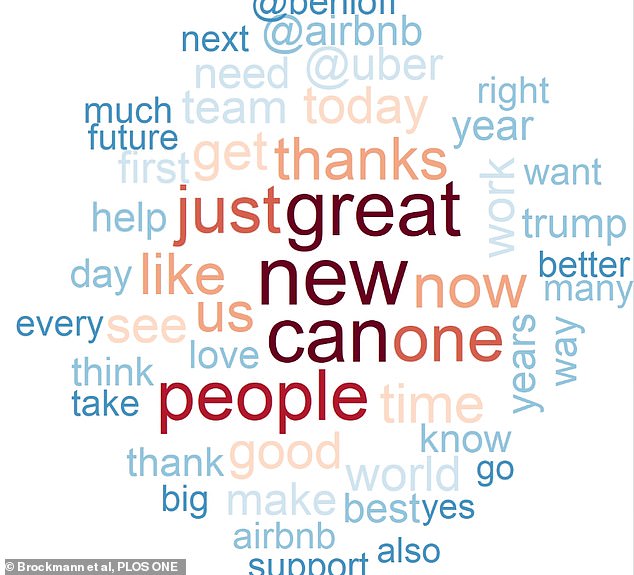 Image shows the 50 most often used words in tweets of the tech elite. Researchers scraped tweets at two points in time (Nov 30, 2018, and March 8, 2019) and collected back in time the maximum number of unique Tweets per account, which resulted in 49,790 Tweets of all 30 account owners from the tech elite

The philanthropic statements from tech elites who signed the Giving Pledge tended to be on average briefer than those from other wealthy signatories (1,796 words versus 2,422 words).

The tech elite philanthropists also tended to use more similar, meritocratic language as a group, with ‘education’, ‘work’, and ‘social’ appearing frequently in their statements along with an emphasis on personal agency, progress and impact.

According to the study authors, tech figures hold a strong positive interest in ‘making the world a better place’, but this belief is also often frequently espoused by other very rich people.

They promote ideas about how to, in the words Mark Zuckerberg, ‘make the world a better place for future generations’ or, as Azim Premji of Indian tech firm Wipro said, to ‘contribute significantly to try and create a better world for the millions who are far less privileged’. 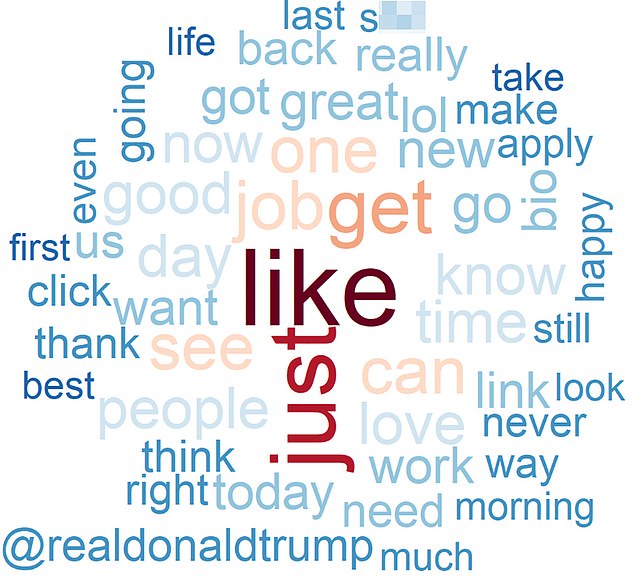 The 50 most-often used words in tweets of the general US Twitter-using population (N = 49,790)

They also frequently use temporal words such as ‘today’, ‘day’, ‘year’, ‘years’, and ‘future’, and they refer more often to a larger audience such as ‘people’, ‘us’, ‘team’ or ‘world’.

Their judgemental language tilts toward the positive, with words such as ‘good’, ‘better’, ‘best’, and ‘right’, and tends to lack negative adjectives.

The authors add: ‘The tech elite may be thought of as a “class for itself” in Marx’s sense – a social group that shares particular views of the world, which in this case means meritocratic, missionary, and inconsistent democratic ideology.’

Researchers highlighted several limitations to this research – firstly, they were not able to trace everyone in their initial 100-person sample for multiple reasons (for instance, Twitter is blocked in China, and many older tech elite do not use Twitter).

It’s also not possible to rule out that Twitter accounts are managed by professional PR experts, which may have affected the language used.

It’s also not clear whether the tech elite denial of a relationship between democracy and money is strategic or an actually-held belief.

The study has been journal PLOS ONE.

THE RICHEST PEOPLE IN TECH 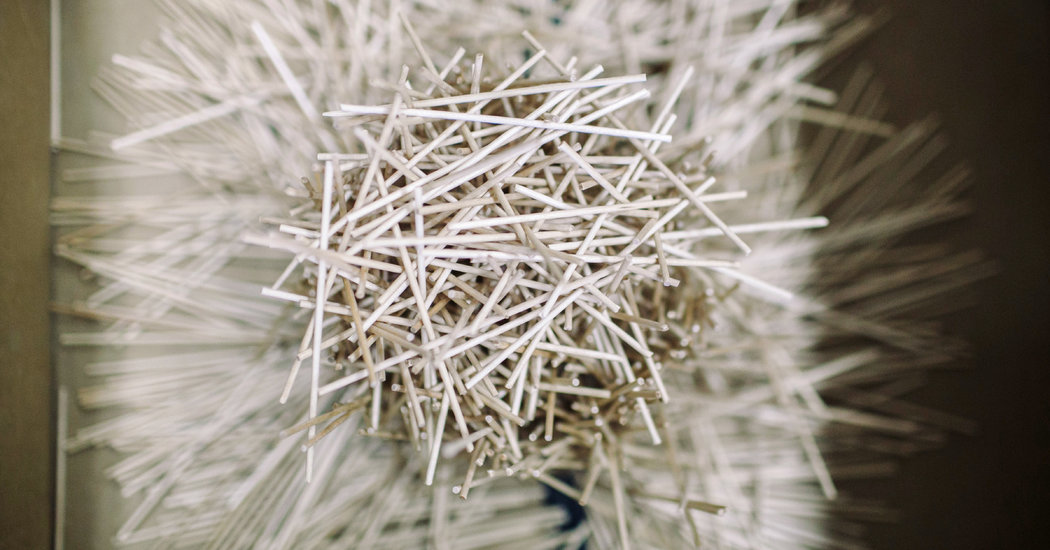 The term “bird’s nest” has come to describe a messy hairdo, tangled fishing line and other unspeakably knotty conundrums. But that does […] 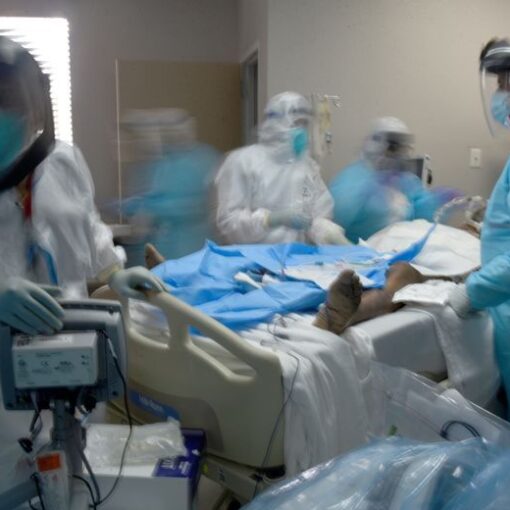 The Conversation How women wage war – a short history of IS brides, Nazi guards and FARC insurgents The names of American-born […] 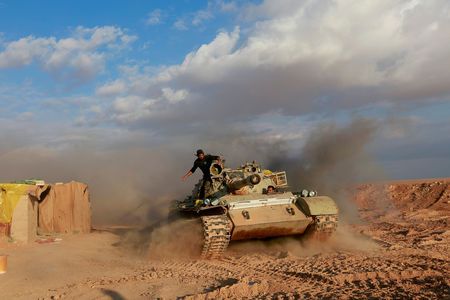 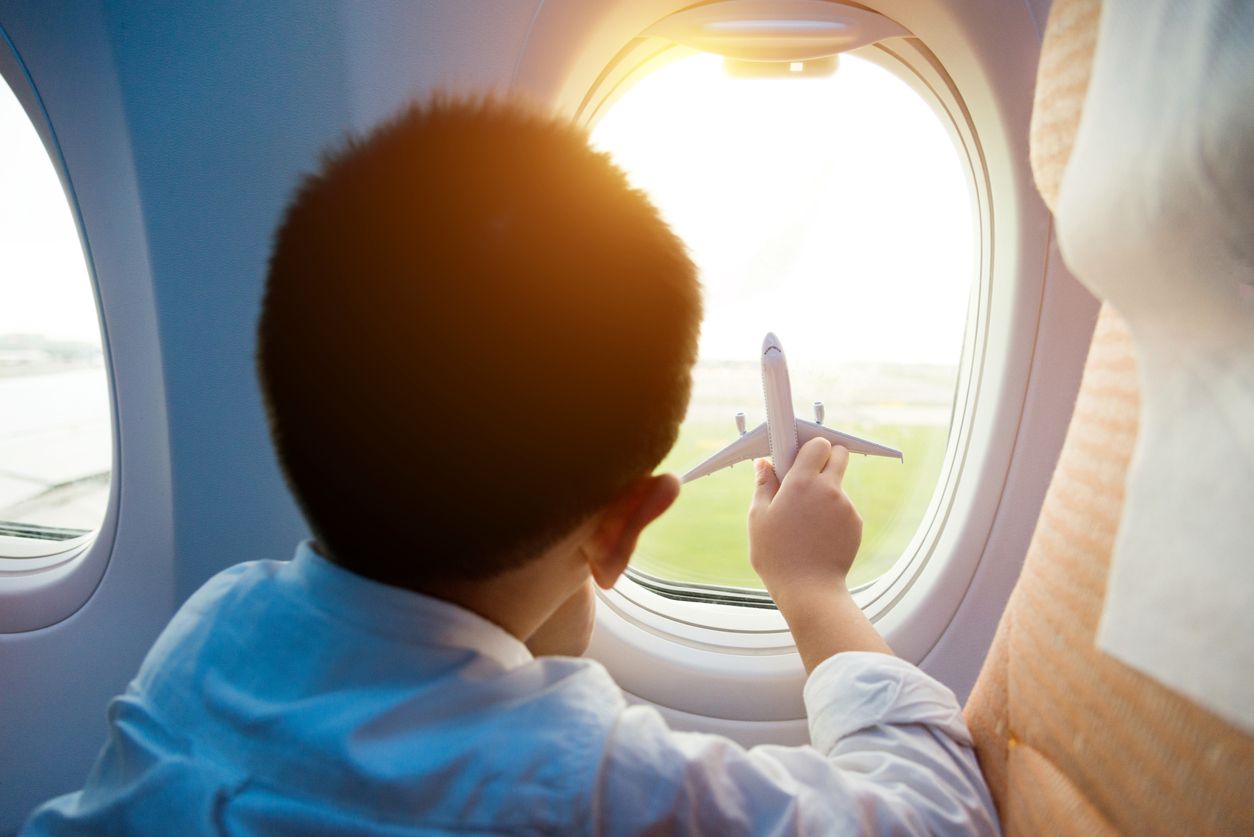 Under pressure from frequent flyers alarmed over climate change, the airline industry says it is “hellbent” on reducing emissions – but the […]