President Joe Biden will sign a series of executive orders and take other actions Thursday intended to dramatically expand vaccine production and distribution – to push forward his goal of vaccinating 100 million Americans in his first 100 days in office.

They came after he signed a federal mask mandate meaning that masks are now compulsory on all federal property. A second is set to follow today for all interstate travel including planes, trains and buses.

The actions and orders are the beginning of an effort to revamp the administration’s policy to push out the vaccine, with 400,000 Americans already having succumbed to COVID-19, and new mutations already spreading in the country.

Biden is also depending on Congress to provide $1.9 trillion for economic relief and COVID-19 response. There are a litany of complaints from states that say they are not getting enough vaccine even as they are being asked to vaccinate a broader swath of Americans.

But the rollout of the existing doses as also been hit by problems. More than 35.9 million doses have been manufactured but just about half – 16.5 million – have been distributed, according to a CDC tracker.

And in New York City officials were forced to reschedule 23,000 vaccine appointments this week alone.

Wednesday marked the second deadliest day, according to COVID Tracking Project data. The deadliest 24 hours came on January 12, with 4,462 people dead, according to data compiled by Johns Hopkins university.

America’s death toll is the highest in the world despite the country accounting for less than five percent of the global population. More than 24.1 million people have been infected since the pandemic began.

‘First we’re going to create as many places as possible for people to be vaccinated,’ said Bechara Choucair, the new vaccine coordinator, on a call with reporters Wednesday. 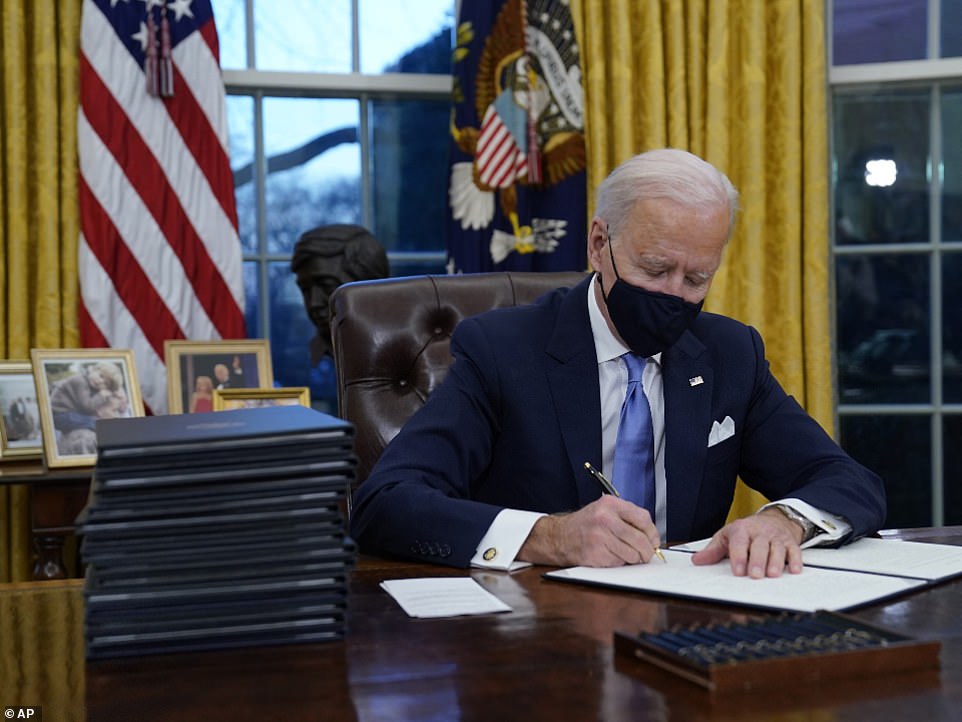 The actions and orders are the beginning of an effort to revamp the administration’s policy to push out the vaccine, with 400,000 Americans already having succumbed to COVID-19, and new mutations already spreading in the country. 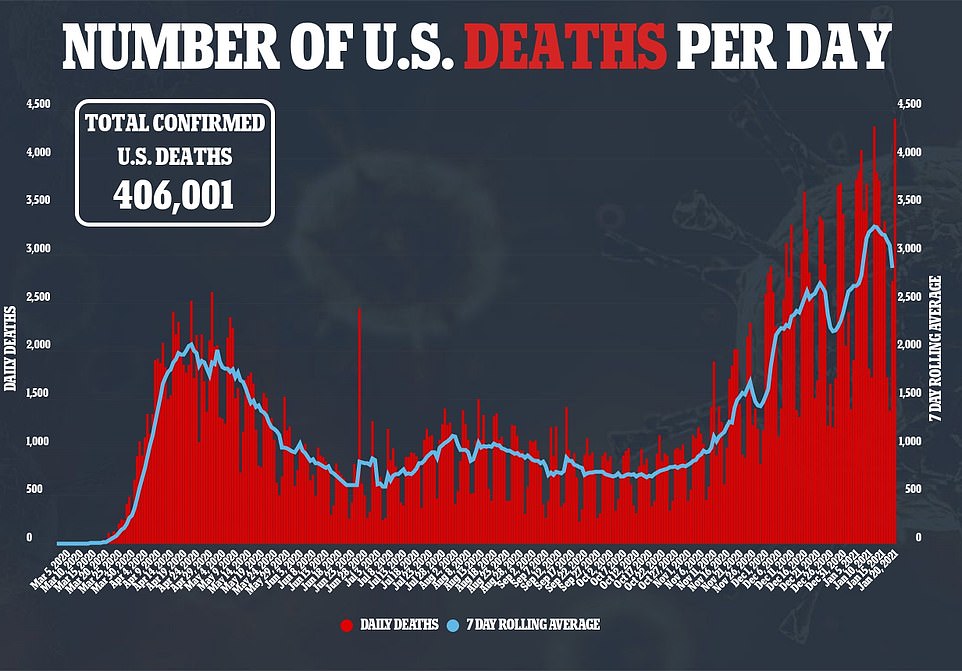 The United States recorded its second deadliest day of the COVID-19 pandemic Wednesday with the deaths of 4,409 Americans.

Wednesday marked the second deadliest day, according to COVID tracking project data. The deadliest 24 hours came on January 12, with 4,462 people dead, according to data compiled by Johns Hopkins university

WHAT’S IN THE PLAN

The immediate goal is to stand up 100 new vaccination centers in a month, following reports of difficulties of getting vaccines out the door in many states, and the U.S. vaccination rate lagging other countries despite the two major vaccines already in distribution here.

Additional efforts will push vaccines into pharmacies, and expand deployments from the Public Health Service.

The push for 100 million would still fall short of what many experts say is needed to achieve ‘herd immunity,’ but the administration believes it will greatly slow the spread and start to bring infections down.

One order would direct agencies to ‘exercise all appropriate authorities’ – including the Defense Production Act – ‘to accelerate manufacturing, delivery, and administration to meet shortfalls in equipment and supplies needed for the COVID-19 response.’

Another would boost FEMA reimbursement rates for assisting states with their response. Another order aims to expanding testing supply and boost access to testing – with an aim toward getting people back to work and reopening schools.

Still another would seek to ensure drug studies ‘address the needs of diverse populations.’ Larger studies already seek to examine the effects on different minority groups. Some localities have already experienced disparities in communities that are getting the vaccine.

An executive order to the Education and Health and Services Departments will direct them to provide guidance on reopening schools ‘so state and local officials have metrics to inform decision-making.’ The administration wants a majority of schools open in 100 days.

A new testing board will be tasked with developing a ‘clear, unified approach’ to testing.

The administration is also planning to provide more information to the public, with regular briefings from public health officials, after the Trump Administration first rolled out and then pulled back coronavirus task force briefings.

Zients said the team he is overseeing will seek to restore trust with the American people. 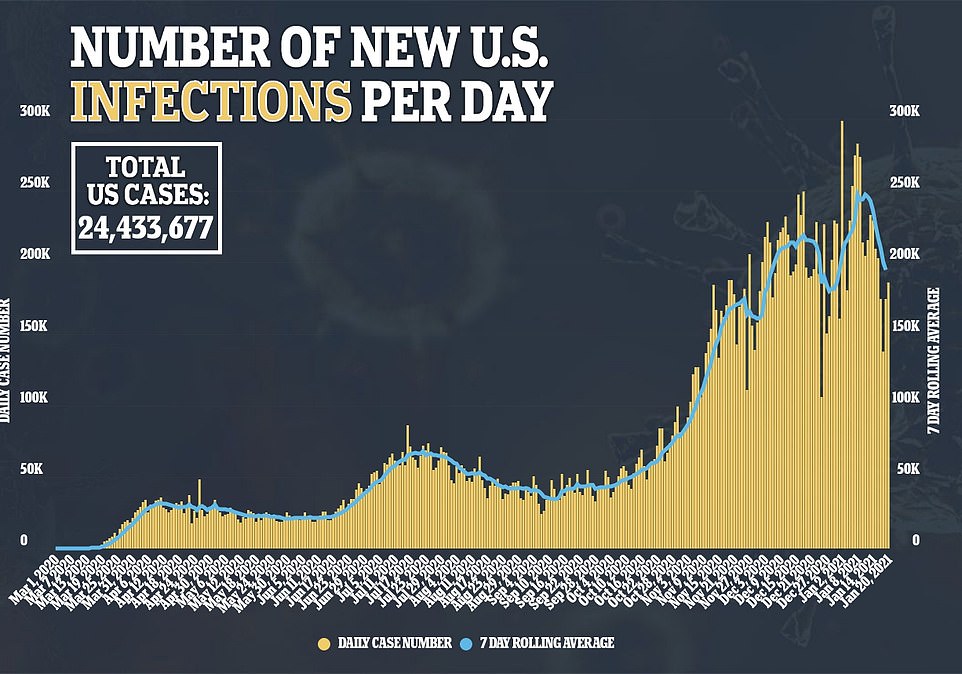 In October, Biden vowed to require masks on airplanes and on interstate transportation, but he did not take that action on Wednesday. The transportation order is expected Thursday, officials said. U.S. airlines, which have been requiring masks without a legal requirement for months, support Biden’s planned mandate.

Biden’s order Wednesday directs the CDC to ‘promptly develop … a testing plan for the federal workforce,’ adding it will be ‘based on community transmission metrics and address the populations to be tested, testing types (and) frequency of testing, positive case protocols.

The president said agencies may make exceptions to mask requirements, but must ‘require appropriate alternative safeguards.’

The Biden administration must implement new testing requirements for nearly all international air passengers that begin Tuesday, following a CDC order last week. Under the new rules, all U.S.-bound passengers age 2 and over must get negative COVID-19 test results within three calendar days of travel.

Biden’s team also announced it would reimpose entry bans on most non-U.S. citizens who have recently been in Brazil, the United Kingdom, Ireland and most of continental Europe after President Donald Trump, in one of his last acts in office, issued an order Monday lifting them effective the same day the new testing rules take effect.

The strategy got an early boost from Amazon, which said it is offering its colossal operations network and advanced technologies to assist Biden in his vow to get 100 million COVID-19 vaccinations to Americans in his first 100 days in office.

‘We are prepared to leverage our operations, information technology, and communications capabilities and expertise to assist your administration´s vaccination efforts,’ wrote the CEO of Amazon´s Worldwide Consumer division, Dave Clark, in a letter to Biden. ‘Our scale allows us to make a meaningful impact immediately in the fight against COVID-19, and we stand ready to assist you in this effort.’

Amazon said that it has already arranged a licensed third-party occupational health care provider to give vaccines on-site at its facilities for its employees when they become available.

Amazon has more than 800,000 employees in the United States, Clark wrote, most of whom are essential workers who cannot work from home and should be vaccinated as soon as possible.

But the scale of the COVID epidemic is now so large that the Centers for Disease Control and Prevention (CDC) predicts that up to 508,000 Americans could die of COVID-19 in less than one month.

Published Wednesday, the ‘ensemble’ forecast combines 37 independent forecasts of coronavirus deaths over the next four weeks into one projection.

The forecast predicts that between 22,500 and 23,300 deaths from the virus will be reported each week for the next four weeks. For the week ending February 13, the ensemble forecast projects that reported COVID-19 deaths in the U.S. will be between 17,000 and 29,300.

More than 38,000 Americans died from coronavirus in the first two weeks of 2021, and the numbers only appear to be increasing.

Health experts said widespread vaccination could help curb the surge of cases, but rollout has been slow. 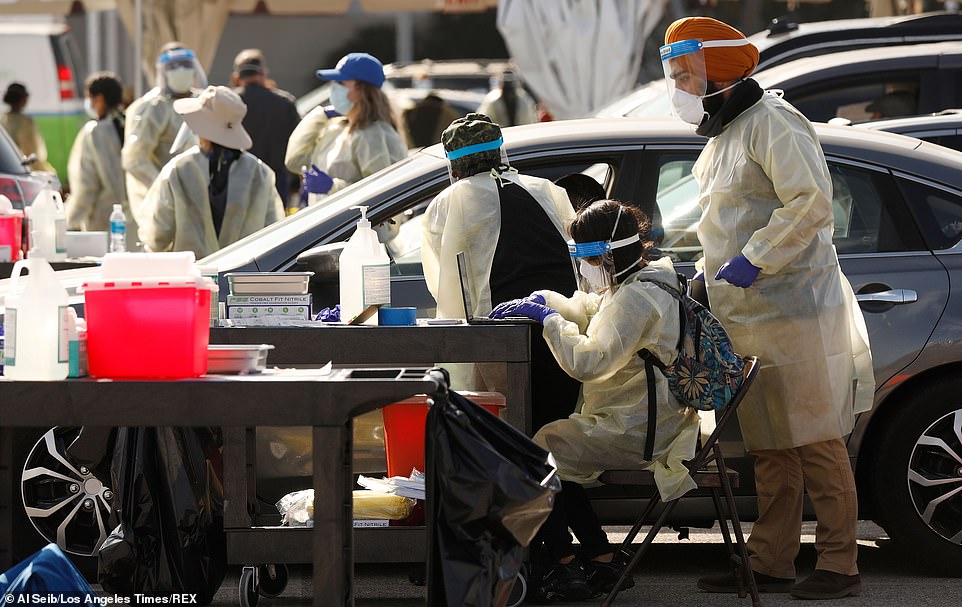 Staff and volunteers distribute the COVID-19 vaccine to people as they remain in their vehicles at The Forum in Inglewood. The Forum is one of five mass-vaccination sites that opened Tuesday in Los Angeles county 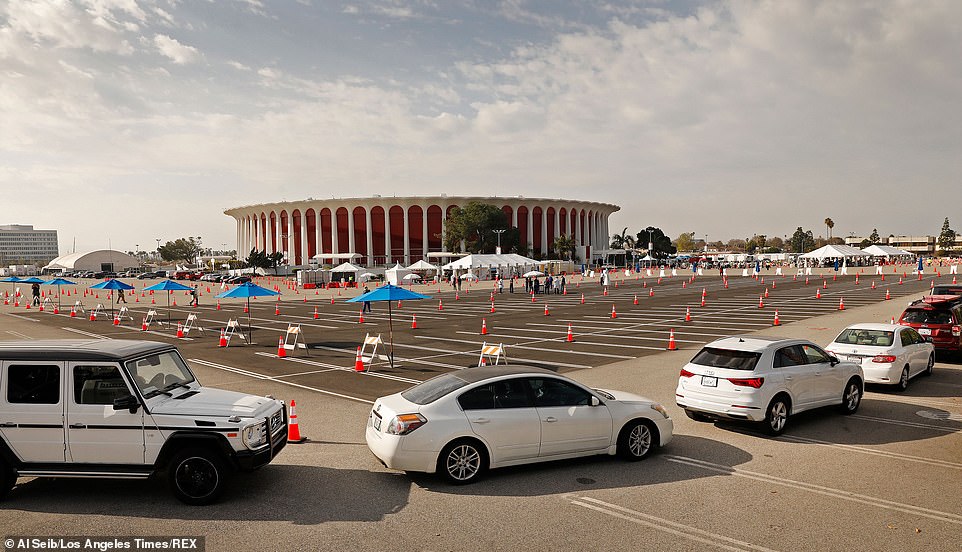 Vehicles line up at The Forum in Inglewood for vaccination distribution as a COVID-19 vaccination site. Health experts said widespread vaccination could help curb the surge of cases, but rollout has been slow 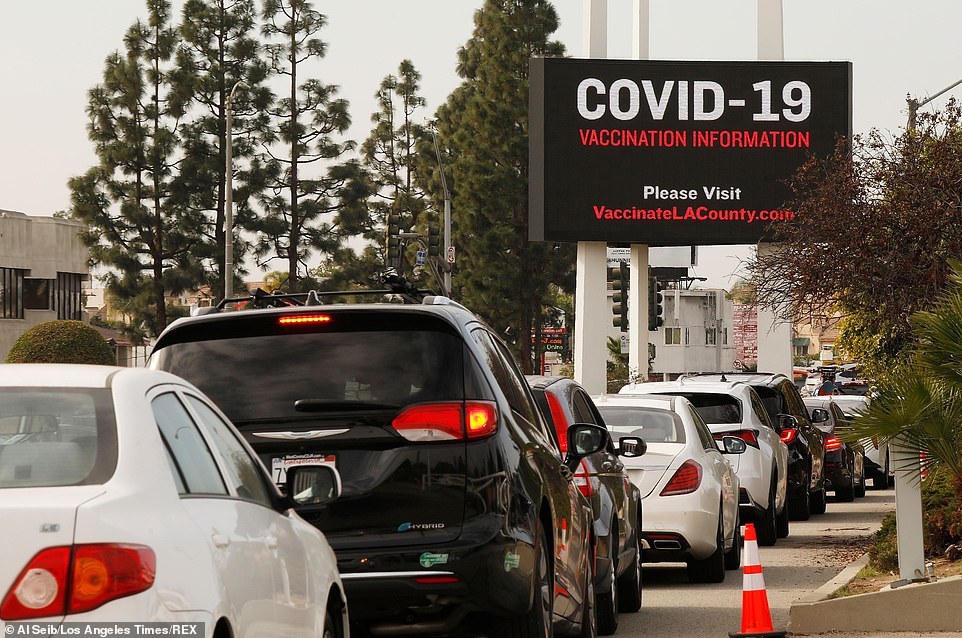 In the nation’s largest city, New York, Mayor Bill de Blasio warned Wednesday that the city would run out of doses altogether by Friday.

De Blasio heightened alarm about the city’s dire shortage of vaccines and called for something to be done to free up more doses at a press conference on Wednesday.

At his own press conference, Governor Andrew Cuomo acknowledged shortages around the state and but shifted blame toward the federal government.

Cuomo said that the state currently has just 145,780 doses remaining and warned that the supply would run out in a maximum of three days.

‘What is clear now is we’re going to be going from week to week – and you will see a constant pattern of, basically, running out, waiting for the next week’s allocation and then starting up again,’ he said. ‘We’re trying to smooth it out, but we’re also trying to get it out as fast as possible.’

The seven million New Yorkers currently eligible to receive vaccines are currently facing wait times of three months or more to get appointments.

Cuomo has projected that it could be six months before all of those currently eligible get their jabs if the federal government doesn’t step in and increase supply.

Just under 908,000 people in the state have received their first doses of the vaccine to date, representing 84 percent of the supply already provided by the federal government, Cuomo said.

New York City was expected to surpass 500,000 vaccinations on Wednesday, de Blasio said, out of more than 940,800 delivered.

A new distribution hurdle emerged on Wednesday, he said, when deliveries of 103,400 doses of the Moderna vaccine were delayed.

‘We already were feeling the stress of a shortage of vaccine. Now the situation has been made even worse,’ he said.

The city is aiming to reschedule appointments for the 23,000 people who had theirs canceled this week within the next week, Health Commissioner Dave Chokshi said. He noted that no second dose appointments were rescheduled, only first doses. 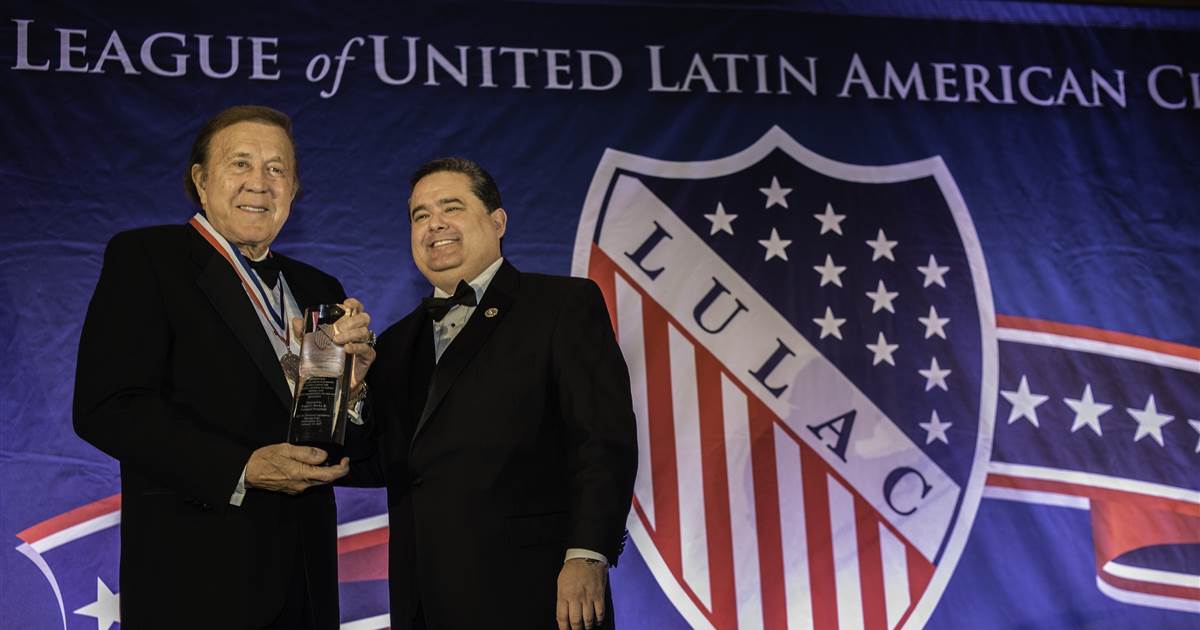 OTTAWA (Reuters) – Four people where shot dead in Penticton, British Colombia, on Monday and a suspect is in custody, the Royal […] 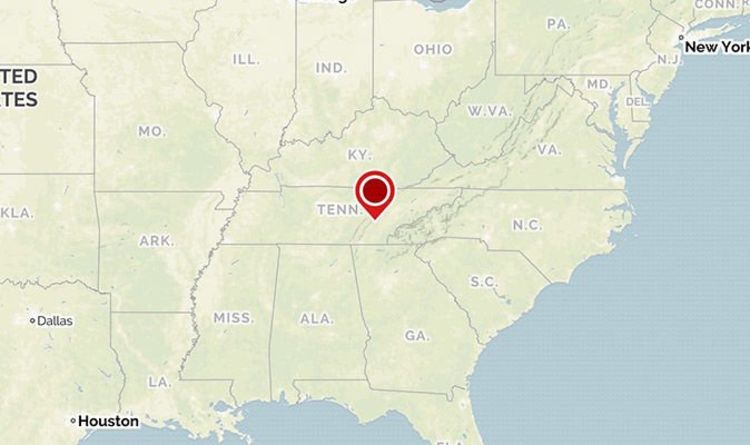 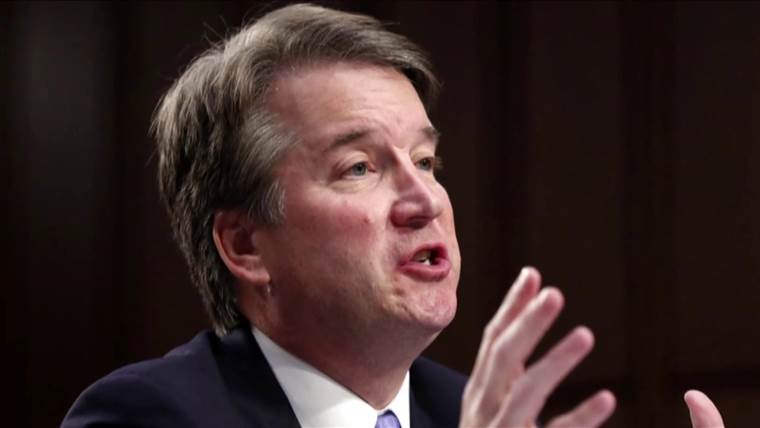