The Spanish football federation did their bit to ensure a clásico final for the Super Cup; Real Madrid, on the other hand, did not. Athletic Bilbao forced a change of plans, dancing around in a circle and singing at the end of a long, tense night in which they took Madrid’s place in Sunday’s final against Barcelona with a 2-1 victory.

And, yes, “Madrid’s place” is the right phrase. The “draw” for the semi-final had been managed to keep Madrid and Barcelona apart until a game that was set up to be the RFEF’s showpiece event, even if it is to be played in an empty stadium in Andalucí­a rather than Saudia Arabia as planned. Sometimes football refuses to be told what to do – which is precisely what makes it so good.

Athletic and Real Sociedad, the two great Basque rivals who last year eliminated Madrid and Barcelona in the Copa del Rey – but are yet are yet to play the final having refused to do so without their fans – have rebelled against the established order again.

On Wednesday, it took a miraculous performance from goalkeeper Marc-André ter Stegen, and then a penalty shootout, for Barcelona to defeat Real Sociedad in Córdoba. La Real had been the better side but had been beaten, denied a place in the final in Seville. Athletic would not be: a little under 24 hours later they knocked out Madrid in a match that, while it didn’t make it to extra time, did run deep into the 98th minute, everyone left waiting heart in mouth for one last VAR check after Sergio Ramos tumbled to the floor.

In the end, no foul was given and the final whistle followed in Málaga. Two first half goals from Raúl Garcí­a had been enough; Karim Benzema’s strike with 15 minutes remaining was not, Madrid falling short of a comeback. The final minutes had been nervous. Marco Asensio hit the woodwork three times, Benzema had an equaliser ruled out for offside, and there was that late, late video review.

Just 10 days after taking over as manager, Marcelino García Toral was into a final with his new team. If that makes it sound like Athletic were fortunate, that is not really the story of this game. Thibaut Courtois made the night’s outstanding saves, twice denying opponents running through, and until the final assaults Asensio had been a man alone: those shots came from individual moments at a time when Madrid were creating little collectively.

The last time these two teams faced each other, just over a month ago Raúl Garcí­a had been sent off inside a quarter of an hour. He admitted afterwards that he felt he owed his team, and he repaid that debt amply here. By half time he had scored twice: the first a tidy finish after Iñaki Williams had allowed Dani Garcí­a’s ball to run through to him, the second a penalty after Lucas Vázquez had hauled down Iñigo Martínez.

Athletic had caught Madrid high up the pitch – Vázquez especially – and although they had little of the ball their lead felt logical. It might have been bigger too when Iker Muniain headed just wide early in the second half. That prompted a reaction from Madrid at last. Asensio hit the bar, smashed the post, and hit the bar again inside 10 minutes. Still it didn’t flow, there was little clarity, but the threat was increasing. And as fatigue crept in for Athletic, chances arrived. Madrid started finding space and opportunities, particularly down their right flank.

On 72 minutes, Benzema finished off Casemiro’s headed pass back to him. The flag went up for offside but VAR eventually gave it. Madrid were in this, although they needed Courtois to deny Asier Villalibre as he escaped into the area soon after. Benzema then scored a second which was ruled out, and Ramos headed a deep cross wide before the board went up.

“When you see six minutes you think ‘cripes’,” Marcelino admitted, although Athletic could have ended it. Racing clean through, Williams waited too long and was denied by a diving tackle from Casemiro in the 92nd minute, setting up a frantic finish.

Ramos tried to reach a cross on 94 minutes, Ferland Mendy struck over the bar a minute later and then with time up, one last attack, and Ramos went down. The wait was a long one, keeping Athletic hanging on, nerves frayed until the clock showed 97.55. In the end, though, it was worth it. 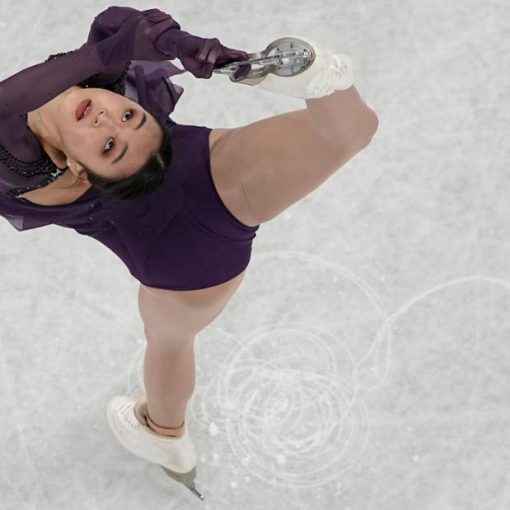 Curious viewers of the Beijing Winter Olympics want to know why. “How do figure skaters not get dizzy?” has been one of […]

South regional Favorite Virginia. The Cavaliers have been the nation’s best team for the last two months and play ferocious defense. But […]

Were it to come off, it would be the daddy of all transfers but Kylian Mbappé and his move to either Real […]