Big business began a boycott Sunday of Republican members of Congress who followed Donald Trump’s demands and voted to overturn the election.

Hotel giant Marriott, the Blue Cross Blue Shield Association and Commerce Bancshare, the parent company of Commerce Bank and other community banks, all told Popular Information they were suspending donations to the group dubbed ‘the treason caucus’ by critics.

Later on Sunday it was revealed Citigroup, the parent company of Citibank has joined the rush, saying in statement: ‘We will not support candidates who do not support the law.’

The New York Times revealed the bank – the fourth-largest in the country – had given $1,000 to Josh Hawley in 2019, which the bank said was because the senator represent Missouri where it has ‘significant employee presence.’

Ford, AT&T and Bank of America said told Popular Information they would consider lawmakers’ actions when deciding on whether to donate, and CVS, Exxon Mobil, FedEx and Target said they are reviewing their political giving.

Berkshire Hathaway said the same. Its owner, Warren Buffett, is the country’s most prominent investor and any boycott by his companies would set the tone for other investors.

The moves came as the two most prominent Trump loyslists, Texas senator Ted Cruz and Hawley, both faced new demands to quit this weekend.

The Houston Chronicle, Texas’ second-largest newspaper, told Cruz in an editorial that it was time to resign, saying: ‘You have blood on your hands.’ Time to go: Demonstrators – including Jon Erblich – called for Josh Hawley to be removed from the Senate at a protest in St. Louis. The Missouri senator does not have a home in the state Message: Demonstrators made clear their anger at Hawley who demanded the election result be overturned 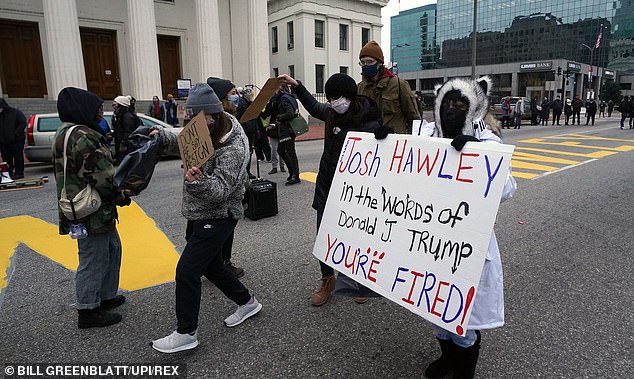 Acolyte: Hawley followed Trump’s demands to overturn the election and is now the focus of anger and losing his donors Existential threat: Kevin McCarthy, the leader of the Republicans in the House (left) went all-in on Trump’s fraud claims. He is now losing donors which could loosen his grip on the leadership. Among the other Trump loyalists were Matt Gaetz, who used a speech to claim violent protesters were actually ‘antifa,’ basing his speech on a facial recognition company being reported to have made the finding. It said he was wrong

It is unlikely he saw it in person; he does not have a home in the state he represents and used his sister’s address for his voter registration.

But the donation boycott, first revealed by Popular Information, represents a threat to more than just the controversial senators.

In total eight senators and 139 members of the House voted to overturn the election results in Arizona or Pennsylvania or both – among them Kevin McCarthy, the House minority leader, and his number two, Steve Scalise.

Both men face an escalating threat to their futures with the number three, Wyoming’s Liz Cheney, having vehemently opposed backing Trump, and a series of their caucus speaking up.

The latest was freshman Peter Meijer, of Michigan, who slammed those who voted to overturn the election on Saturday as cowards, liars and grifters.

And Adam Kinzinger, an outspoken anti-Trump voice, revealed a threat by a Trump loyalist radio host, David Webb, to force a primary against him for speaking out, tweeting: ‘I know one thing I’m at peace with… I didn’t cause an insurrection that killed 5 including a heroic Capitol Police officer beaten by a ‘patriot’ with a fire extinguisher.’

Marriott’s move is the first sign that big business will cut off the cash spigot to those who voted to overturn the election.

In a statement it said: ‘We have taken the destructive events at the Capitol to undermine a legitimate and fair election into consideration and will be pausing political giving from our Political Action Committee to those who voted against certification of the election.’

The Blue Cross Blue Shield Association said in its statement: ‘In light of this week’s violent, shocking assault on the United States Capitol, and the votes of some members of Congress to subvert the results of November’s election by challenging Electoral College results, BCBSA will suspend contributions to those lawmakers who voted to undermine our democracy.’

It had donated $500 to Hawley, but $10,000 to Tommy Tuberville, the new Alabama senator who voted to overturn the results even after other Republicans deserted the measure in the wake of the violence.

The former football coach is a political novice who thought his WWII veteran father helped liberate Paris from ‘Communists’ and said he would need six months to learn the rules of the Senate. Another demand to go: Ted Cruz was told to resign by the Houston Chronicle as bog donors started deserting and more could follow. Among those reviewing donations in future are AT&T which is headquartered in Dallas Pariahs: Joe Manchin, the moderate Democratic senator from West Virginia, said of Hawley and Cruz: ‘I don’t know how they live with themselves.’ All in this together: Matt Gaetz was one of the most recognizable House members of the ‘treason caucus’ and elbow-bumped Hawley during the joint session to ratify Joe Biden’s victory

Trump phoned Tuberville when senators were being held in a secure area as the MAGA mob ran free to ask him to object to even more states’ results when the Senate resumed election certification.

And Commerce Banschare told Popular Information: ‘At this time, we have suspended all support for officials who have impeded the peaceful transfer of power.’

Its Commerce Bank is headquartered in Kansas City, Missouri, and has branches in the mid-west, Kansas, and Colorado.

It donated $5,000 to Roger Marshall, the new Kansas senator who voted to decertify both Arizona and Pennsylvania, and overall donated six times as much to Republicans as Democrats out of $113,000 in total donations.

Company PACs, which all three operate, are powerful tools because the companies’ own executives and employees are likely to follow their example in how to donate to.

And candidates rely on corporate donations to be the backbone of the their operations.

They are much less costly to gather and process than those from individual voters and few politicians are successful at harvesting national small-dollar donations.

Among the two who were successful were Cruz and Hawley, who made text message appeals to their supporters for cash while the mob rampaged.

Three big-name companies deserting, and more reviewing could open the way for others to follow.

The biggest companies are represented by the Business Round Table, which is chaired by WalMart’s Doug McMillon.

It has still to spell out a position on donations but slammed Trump’s ‘fiction’ as being the reason for the MAGA riots.

On Friday it issued a statement which said: ‘Yesterday’s inexcusable violence and chaos at the Capitol makes clear that elected officials’ perpetuation of the fiction of a fraudulent 2020 presidential election is not only reprehensible, but also a danger to our democracy, our society and our economy.’

Hawley is so far the biggest financial loser out of the Republicans, with two of his mega-donors slamming him.

David Humphreys, a CEO whose family have donated $6 million to Hawley, said the senator should be censured, and Sam Fox, another Missouri donor, said he would never give to Hawley.

He also lost his book deal with Simon & Schuster for a work on big tech censorship and responded saying he would sue the private company for breaching his First Amendment rights.

Inside the senate the two are now pariahs for Democrats and Republicans are barely more friendly.

Joe Manchin, the moderate Democrat from West Virginia, told CNN’s State of the Union Sunday that he did not think the Senate had power to expel them but that they should be ‘beaten by the American people’ if they try to run for re-election.

‘I don’t know how they can live with themselves,’ he said.

Chris Coons, a moderate Democrat who is both close to Joe Biden and known for his friendships across the aisle, however has called for an expulsion vote, saying that by voting to overturn the election results they had lost the right to serve.

Pat Toomey, the Republican from Pennsylvania, said the two ‘would have a lot of soul searching’ for their actions.

He told NBC’s Meet the Press: ‘That’s going to haunt them for a very long time. They’re going to pay a very heavy price.’

Senators – and congressmen – are not subject to recall elections and can only be expelled by two-thirds majority votes in their chambers.

In the House there is little danger of an expulsion vote given that 139 Republicans voted to overturn the vote.

But an escalating big business boycott would cripple McCarthy and Scalise’s hold over their caucus.

It could also spread to a boycott of the Republican National Committee which voted after the violence to reinstate Ronna McDaniel as its chair.

She had been all-in on overturning the election, leading to questions over whether corporate donors could boycott her efforts too. 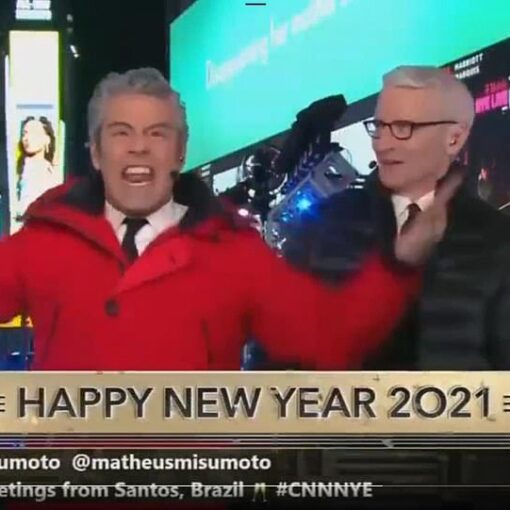 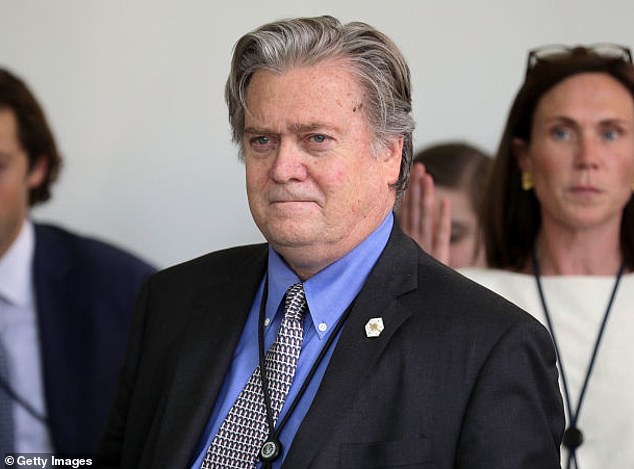 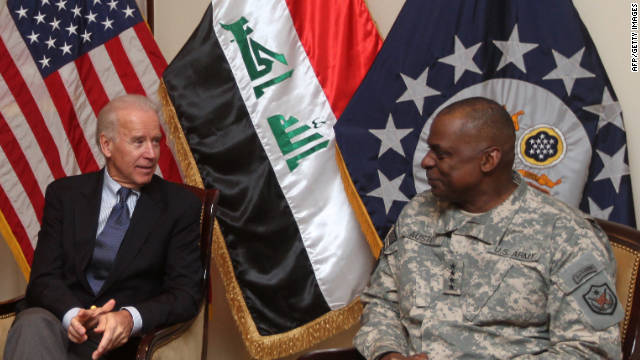 If confirmed by the Senate, Austin would be the first Black man to lead the Department of Defense. In addition to serving […]