President Donald Trump returned to Washington D.C. on New Year’s Eve amid a fight with Congress over $2,000 stimulus checks, the defense bill and the upcoming certification of the electoral college vote – and he released a New Year’s video message claiming that ‘everyone is calling’ to thank him for the vaccine.

Trump and first lady Melania Trump held hands as they walked from Marine One toward the White House with the president splitting off from his wife to go to the Oval Office.

The return from Florida came a day earlier than planned and the first couple is missing the annual New Year’s Eve gala at Mar-a-Lago, where guests paid $1,000 per ticket, to be in Washington to watch the clock turn over to a new year.

Trump also touted his accomplishments with Operation Warp Speed in a bizarre video he shared on Twitter Thursday afternoon.

‘Over and over again, we were told it would be impossible to deliver a vaccine by the end of the year,’ Trump said in the five-minute clip.

‘The world will benefit. We’ll benefit. And everybody’s calling to thank me,’ Trump added. 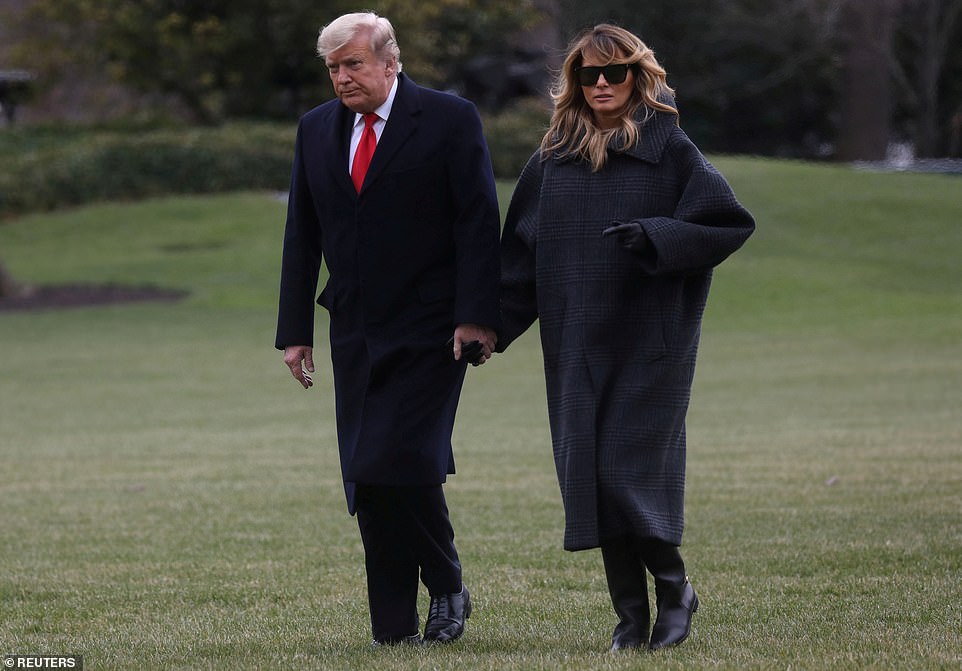 President Donald Trump and first lady Melania Trump walk from Marine One toward the White House after returning to Washington D.C. from Florida a day earlier than planned 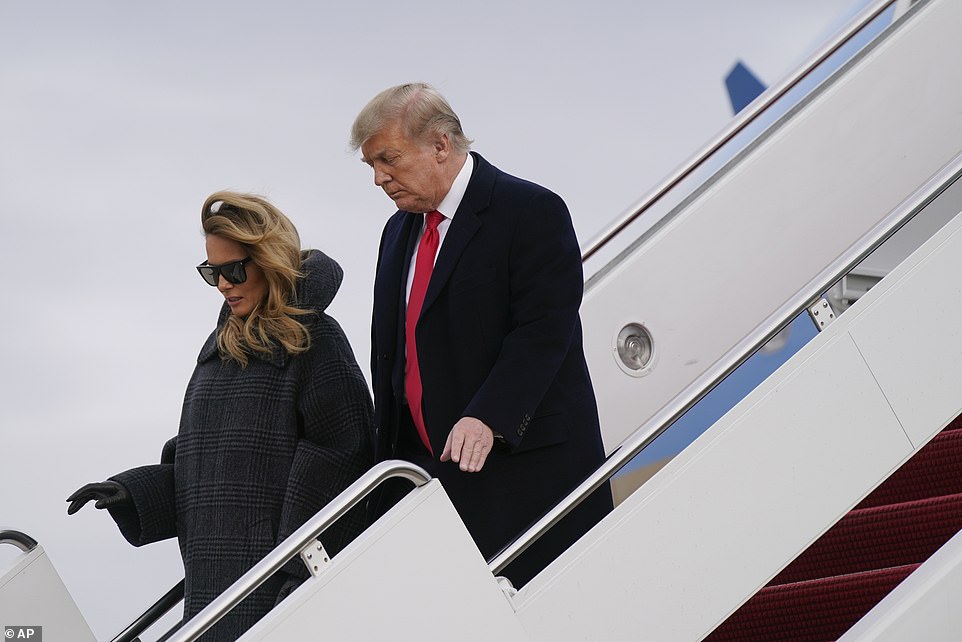 The Trumps exit Air Force One on New Year’s Eve, where they will celebrate the New Year holiday at the White House rather than at a gala at Mar-a-Lago 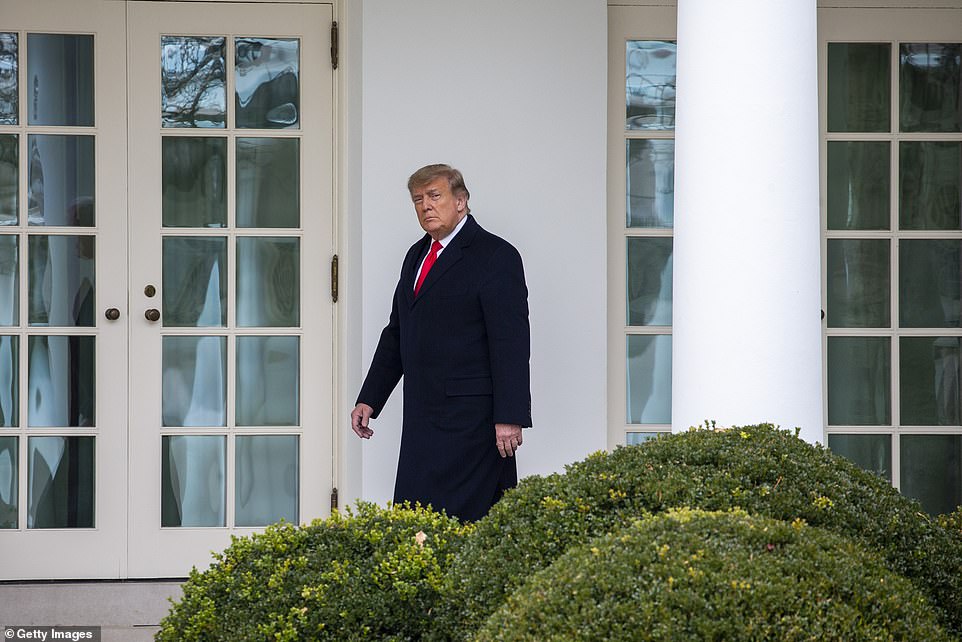 President Donald Trump walks to the Oval Office after arriving back in Washington D.C.

Less than three weeks before his departure from the White House, President Donald Trump is taking one more victory lap for what he views as his accomplishments during 2020.

White House officials did not give a reason for the return but it coincides with Trump’s fight with Congress over his veto of a major defense bill, his demand for increased COVID stimulus checks, and the January 6th electoral college certification, which Republicans plan to object to. It also comes amid increased tensions with Iran.

While Trump is back in Washington, President-elect Joe Biden is expected to spend a quiet night at his beach house in Rehoboth, Delaware, although he is scheduled to appear on the ABC special ‘Dick Clark’s New Year’s Rockin’ Eve with Ryan Seacrest 2021′ on Thursday evening.

Meanwhile, Senate Majority Leader Mitch McConnell gave the likely death blow to Trump’s bid to boost the COVID relief checks to $2,000 from the $600 – an 11th hour demand the president made after sitting on the sidelines while the deal was negotiated with his administration and passed by Congress. 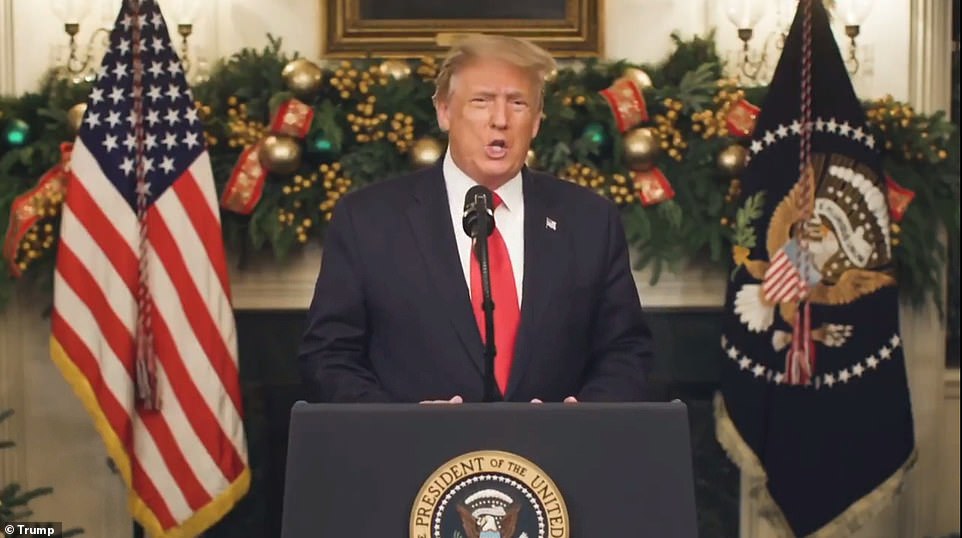 Trump also touted his accomplishments with Operation Warp Speed in a bizarre video he shared on Twitter Thursday afternoon. ‘Over and over again, we were told it would be impossible to deliver a vaccine by the end of the year,’ Trump said in the five-minute clip (pictured)

In the opening minutes of the Senate’s New Year’s Eve session, McConnell again objected after Senate Minority Leader Chuck Schumer tried to get a vote on the matter for the third day in a row.

McConnell has made it clear there is ‘no realistic path’ forward on increased stimulus checks this year, as he said on Tuesday. He offered his own bill that included the $2,000 provision, but also killed off Section 230 of the Communications Decency Act, while also creating an election commission – two Trump demands.

That bill was a poison pill for Democrats.

McConnell then moved on to the other business at hand – overriding President Trump’s veto of the annual defense bill, which funds the Pentagon and gives troops a pay raise.

Senator Bernie Sanders and a small group of progressive Senate Democrats had wanted to delay the vote to overrule Trump’s veto of the National Defense Authorization Act to push McConnell on the $2,000 check issue, but they were overruled by members of their own party who voted Wednesday night to start that process. 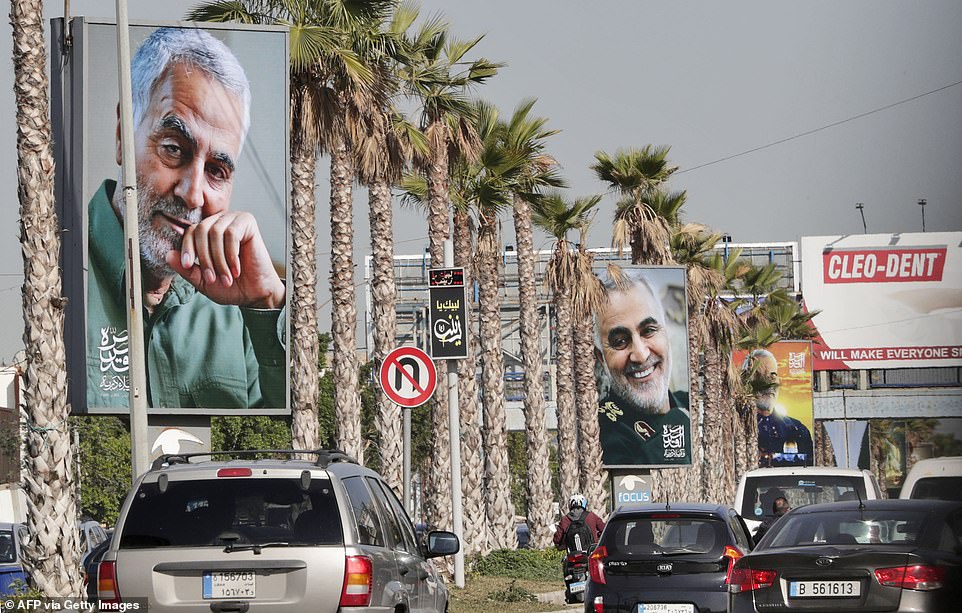 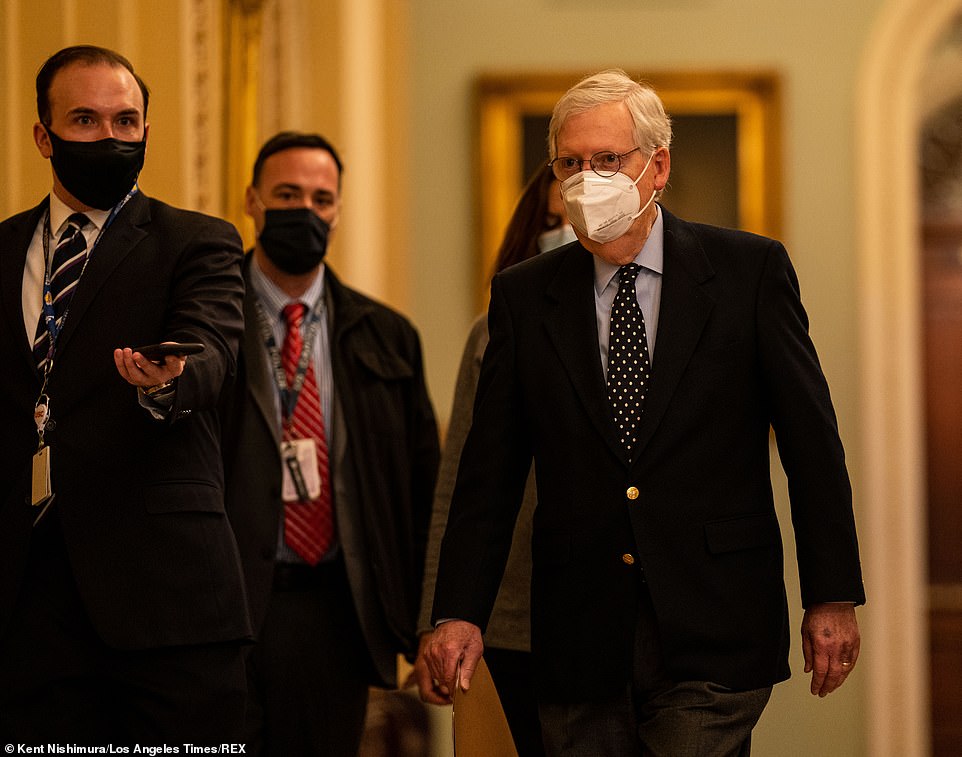 Senate Majority Leader Mitch McConnell crushed yet another Democratic effort to get a vote on a stand alone bill to increase COVID-19 stimulus checks to $2,000 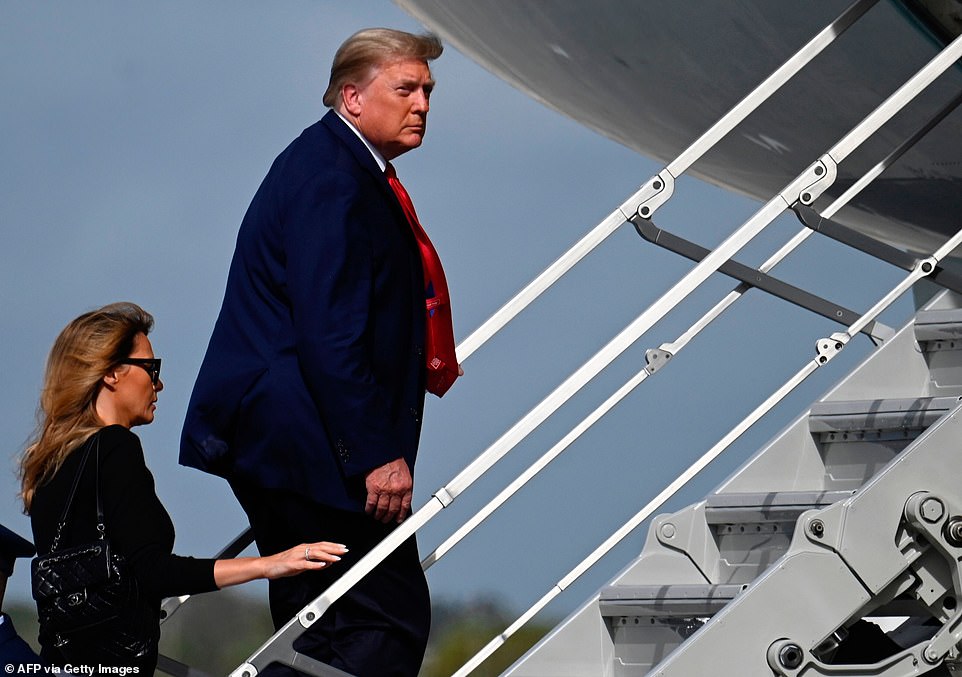 President Donald Trump and first lady Melania Trump board Air Force One as they depart from Florida early on Thursday to return to Washington, D.C. 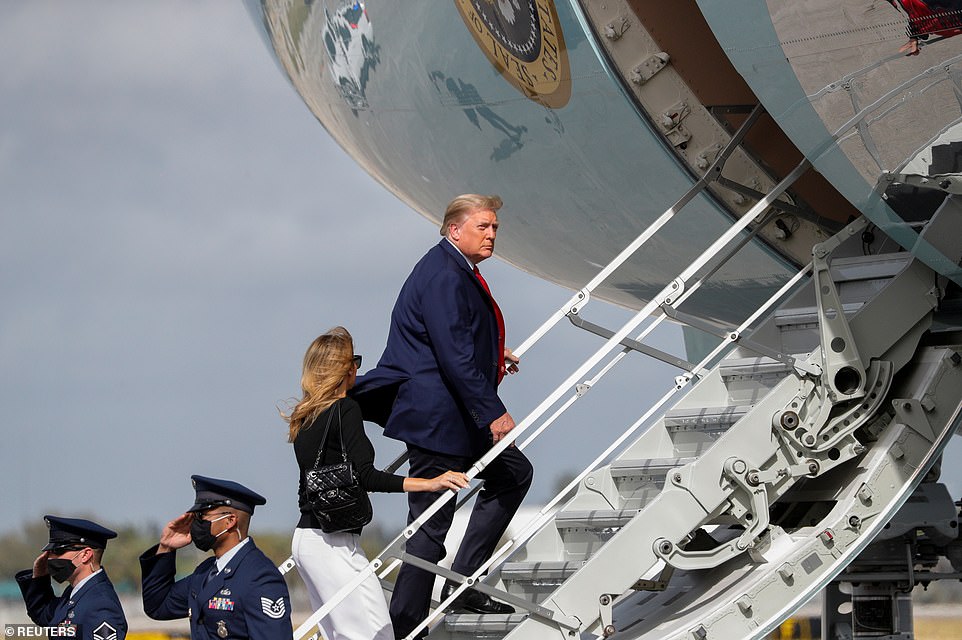 The first couple will skip out on the annual New Year’s Eve Party at Trump’s Mar-a-Lago club after guests paid $1,000 and were promised the president would be in attendance 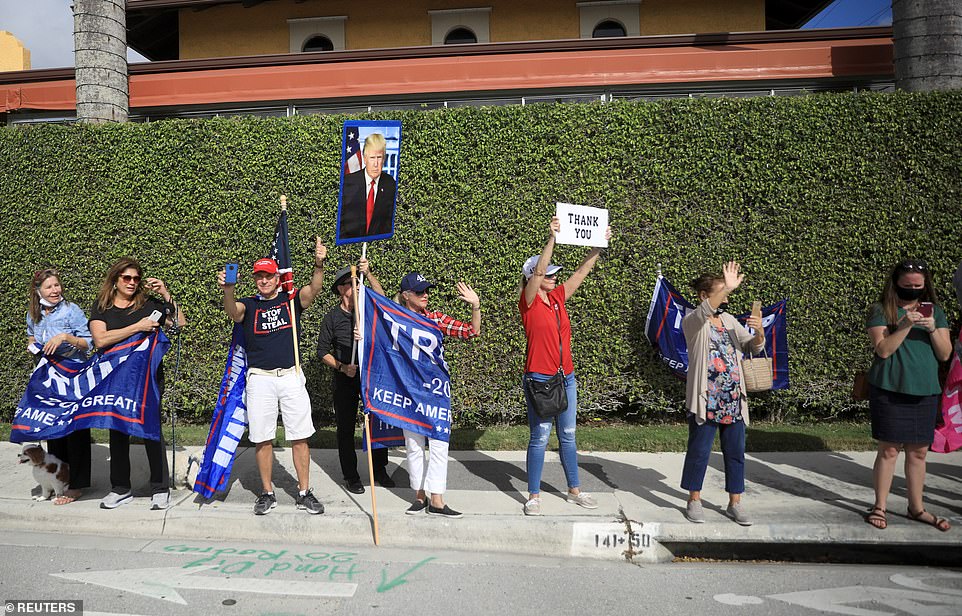 Schumer and also Vice President-elect Kamala Harris voted in favor of the motion to proceed. The Senate voted 80-12 to begin debate on the issue, with another procedural vote due on Friday.

The House already overrode Trump’s veto of the must-pass defense legislation. The Senate is expected to do the same, making the defense bill law and giving Trump his first veto override.

The president had long promised to veto the defense bill, first over the inclusion of a provision to rename military bases named for Confederate figures.

More recently, Trump threatened to veto it if Congress didn’t retool Section 230 of the Communications Decency Act, which the president argued gives ‘big tech’ companies like Facebook and Twitter too much legal protection. The section gives the companies protection from lawsuits over content published on their platform.

The president was also said to have concerns over whether Iran will retaliate in the coming days on the one year anniversary of the US drone strike that killed the country’s top general, Qasem Soleimani.

Iranian Foreign Minister Mohammad Javad Zarif accused Washington on Thursday of trying to manufacture a reason to attack his country. He vowed Tehran would defend itself even though it does not seek war. 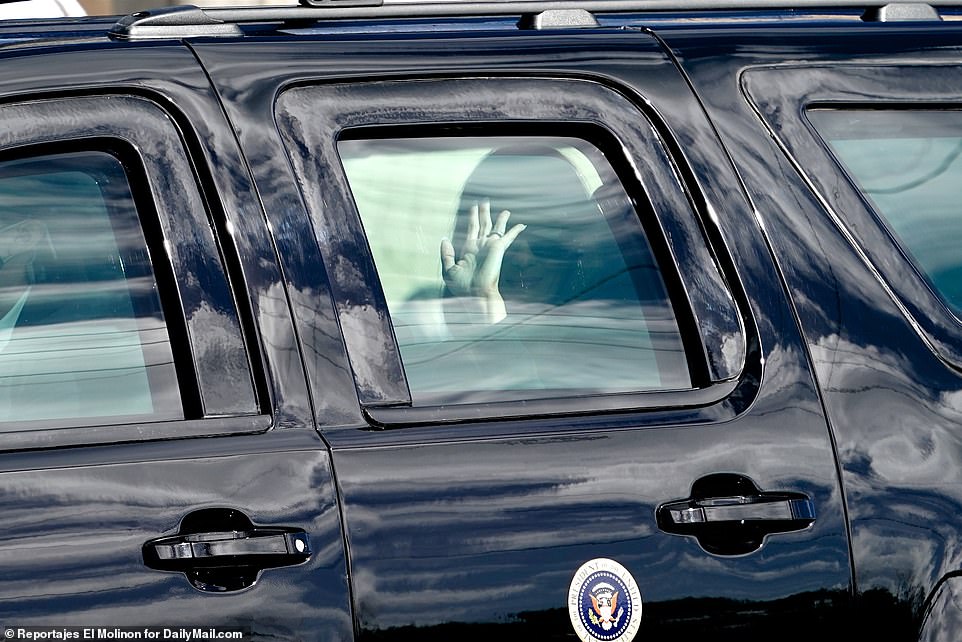 Melania Trump waves to supporters lining the route in Palm Beach as the first couple drives from Mar-a-Lago to the Palm Beach Airport to return to Washington D.C. 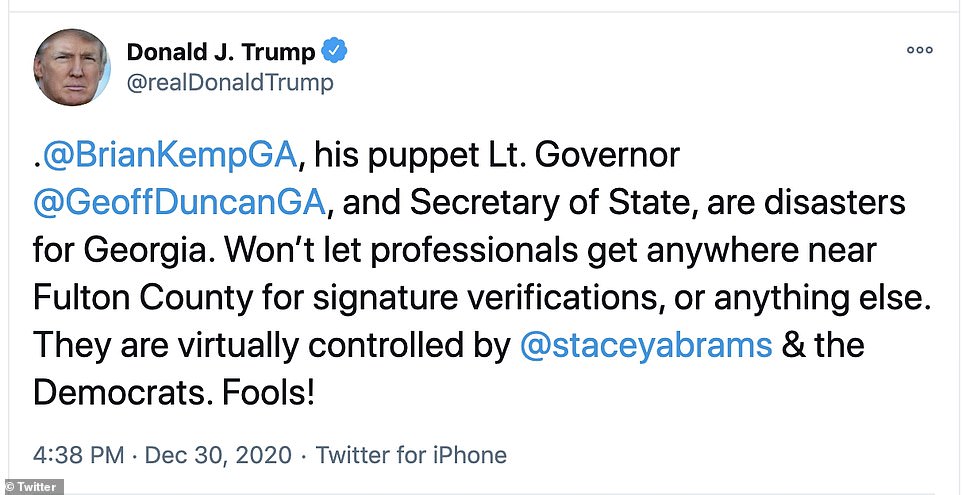 Trump has spent the majority of Wednesday on Twitter blasting various Republicans for not doing more to stop his alleged voter fraud, claiming Georgia Gov. Brian Kemp is being controlled by Stacey Abrams 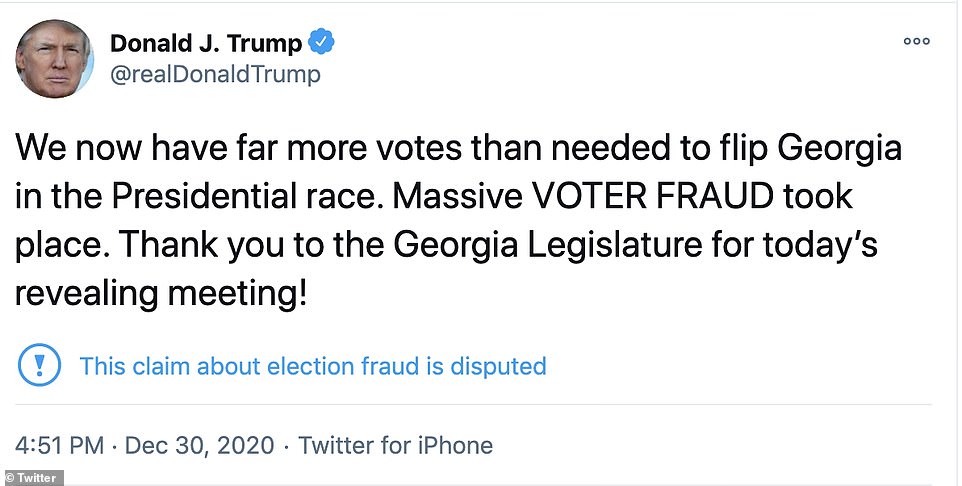 Two US B-52 bombers flew over the Middle East on Wednesday in what U.S. officials said was a message of deterrence to Iran ahead of the first anniversary of a US drone strike that killed Soleimani on January 3, 2020.

Meanwhile, January 6 has been a crucial date on Trump’s radar while he’s been in Florida as that is the date Congress will certify the electoral college results. Biden won with 306 votes to Trump’s 232.

The president is trying to overturn the election results so he can stay in the White House for a second term.

Trump spent the majority of Wednesday on Twitter blasting various Republicans for not doing more to stop his alleged voter fraud, claiming Georgia Gov. Brian Kemp is being controlled by Stacey Abrams. He’s also falsely claimed that he has enough votes to flip Georgia.

‘@BrianKempGA, his puppet Lt. Governor @GeoffDuncanGA, and Secretary of State, are disasters for Georgia. Won’t let professionals get anywhere near Fulton County for signature verifications, or anything else,’ Trump claimed. ‘They are virtually controlled by @staceyabrams & the Democrats. Fools!’

His early return comes as Senator Josh Hawley of Missouri became the first member of the upper chamber to voice his support for contesting the electoral college vote on Wednesday. Hawley, a Republican, said that ‘some states, particularly Pennsylvania, failed to follow their own state election laws.’

‘At the very least, Congress should investigate,’ he said in a statement.

‘For these reasons, I will follow the same Democrat members of Congress have in years past and object during the certification process on January 6 to raise these critical issues,’ Hawley explained. Hawley did not provide any evidence for his claims. 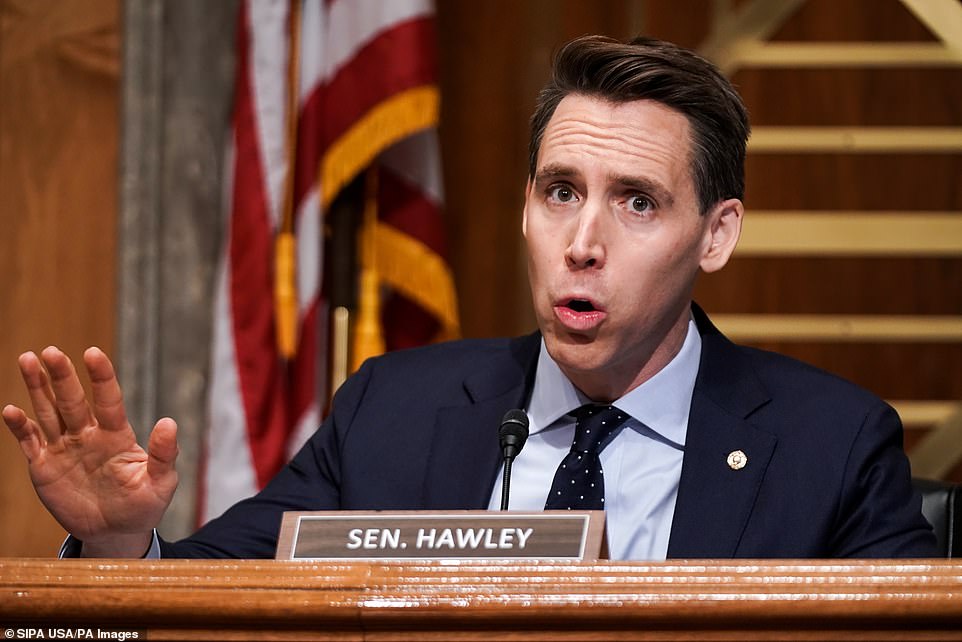 Senator Josh Hawley of Missouri got into a Twitter spat with Walmart, the world’s largest retailer, on Wednesday

Next Wednesday, Vice President Mike Pence will preside over a meeting of Congress when the results of the Electoral College vote are read and tallied.

It’s generally a formality, but as Hawley pointed out, Democrats did object to certain states’ vote counts, including during the 2016 and 2004 races.

Pence refused to sign on to the plan that would upend Congress certifying the election for Biden.

In order for challenges to be debated, both a House member and a senator have to sign on to an objection.

House Democrats raised concerns after the 2016 race over state tallies in Alabama, Florida, Michigan, Texas, Mississippi and the Carolinas, however no Democratic senator joined the effort.

Biden, at the time serving as vice president, gaveled down the protests because they weren’t joined by a senator. 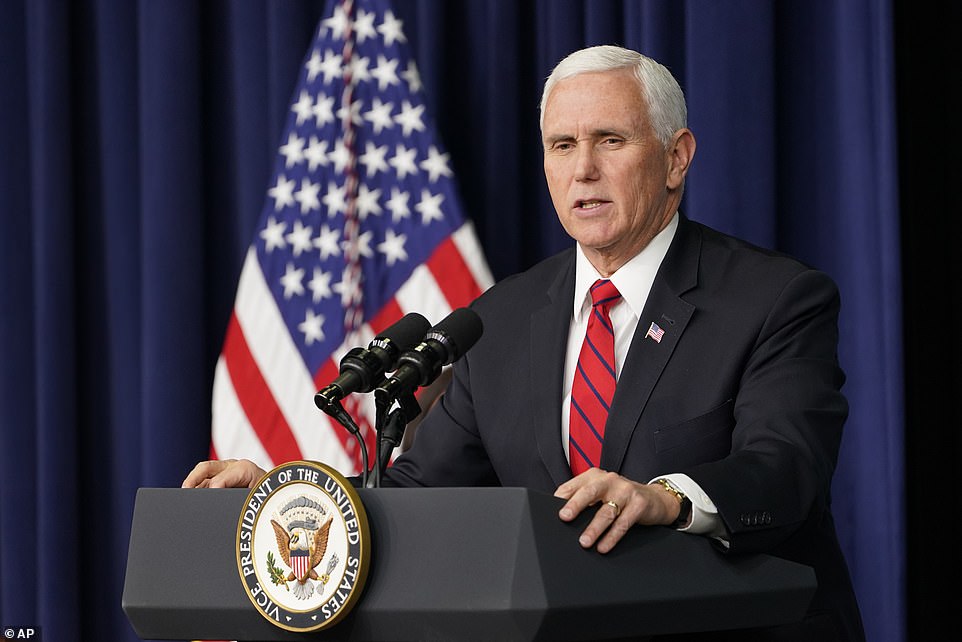 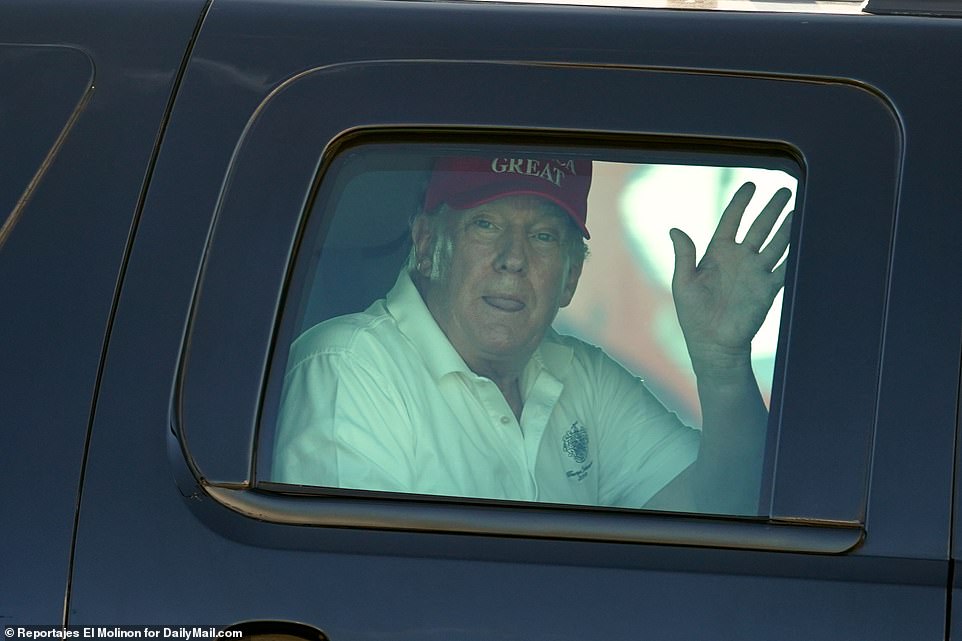 President Donald Trump has been pressuring Republican senators to object to states’ Electoral College vote counts, as a senator and a House member have to sign on for there to be a debate and a vote. Depending on how many states Republicans object to, it could hold up certifying the election for Joe Biden for hours

President Donald Trump is encouraging his supporters to come to Washington, D.C. the day that Congress certifies the Electoral College results. With Hawley saying he’ll join in an effort to object to states’ votes, the process could take hours

Once Hawley and House Republicans object to a state’s vote count on January 6th, lawmakers will go back to their respective chambers and discuss the merits of the objection for two hours.

Only a majority vote is needed to overrule the objections.

With the Democrats controlling the House and several Republicans in the Senate publicly saying that the election is over – and Biden is the winner – Hawley’s objection will trigger a delay, but not flip the results to Trump.

McConnell asked senators not to engage because they’d be forced to go on the record and by voting in favor of Biden’s win, could be in danger of being taken down by pro-Trump forces within the Republican Party.

On December 15, the day after the Electoral College met, McConnell publicly congratulated Biden as president-elect. 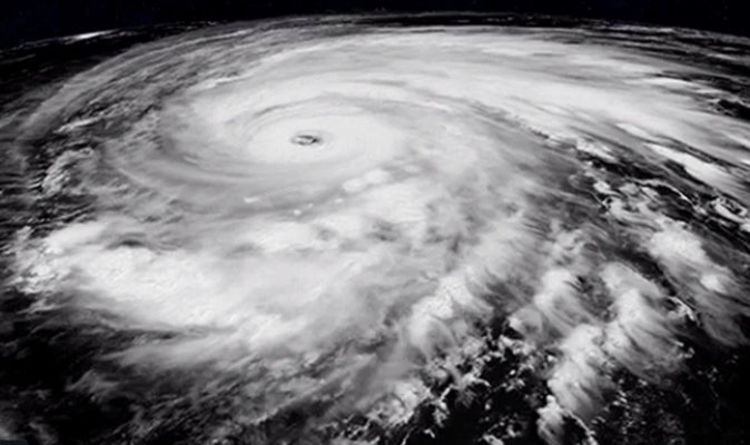 Incredible satellite images have been captured of Hurricane Lorenzo as it builds over the Atlantic. The storm is currently registering as a […] 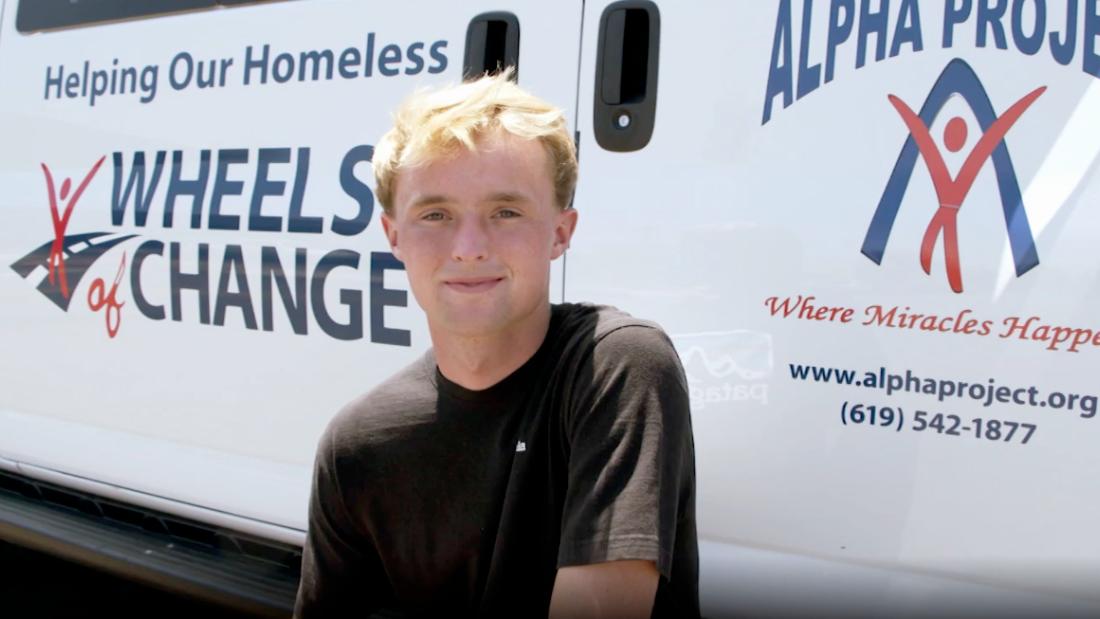 His mother, Dr. Carolyn Barber, worked in a busy emergency room and would come home with stories about the homeless patients she […] 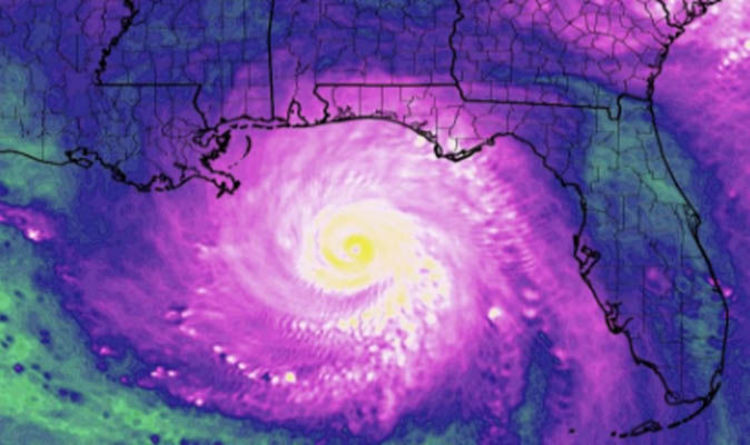 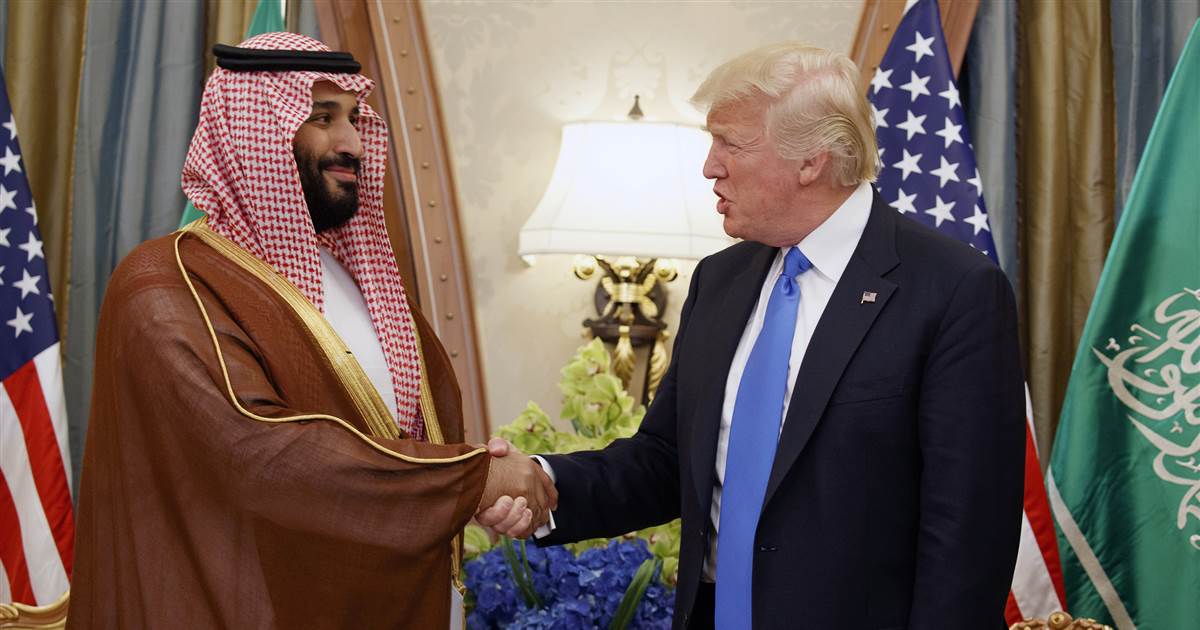