The quake happened in Petrinja region this morning, sending shockwaves through the surrounding areas. According to the United States Geographical Survey (USGS), the scientific agency of the US government, the quake had a magnitude strength of 6.4. It caused extensive damage to buildings in the area south of Zagreb. The Croatian Red Cross said rescuers had rushed to the scene of the quake to help with the recovery efforts.

A video posted by the charity online showed panicked rescuers running through a heavily damaged street strewn with bricks and debris.

They tweeted: “Strong earthquake again. The situation in Petrinja is very serious.

“The Red Crisis teams are on the field.”

In one snap, a roadside kiosk can be seen surrounded by food and drinks which had fallen from shelves.

Workers wearing hi-vis vests and helmets can be seen in the scene of chaos.

Reports on social media suggested tremors were also felt in the Germany city of Munich as well as parts of Italy and Hungary.

“These are southern cities close to the Croatian border.”

And another person, who said they live 88 miles from the epicentre of the quake, said their apartment block was shaking.

The person tweeted: “Felt it pretty good in an apartment complex, whole block was wobbly.

“We never feal ANY quake at all like this. Last 50 years wasn’t something strong as this. 142 km from epicentre.”

One person living in the coastal Croatian city of Rijeka, 90 miles from Petrinja, said they could also feel the quake.

“First one was stronger and longer.”

A power plant in neighbouring Slovenia has been forced to closed due to the quake.

Jernej Vrtovec, Slovenia’s minister for infrastructure, said: “Due to the strong earthquake, the Krško NPP is safely stopped.

“The shutdown was due to the automatic operation of the turbine protection. After the first inspection without consequences, so safety is not compromised.”

Limited damage was caused to buildings in the city.

Tremors were felt in neighbouring Bosnia.

This is a breaking news story… More to follow…. 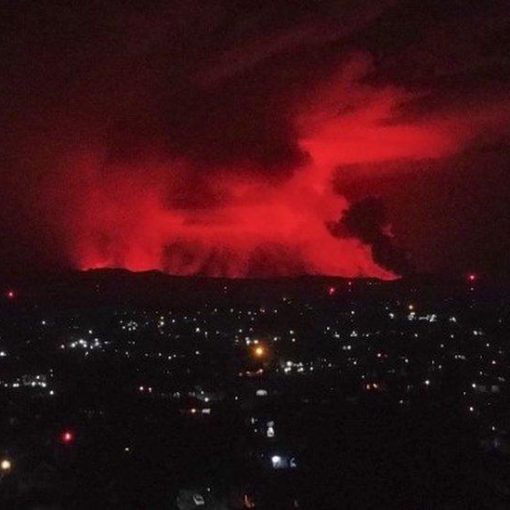 The volcano last erupted in 2002, killing 250 people A large volcano in the Democratic Republic of Congo has erupted, sending panicked […] FILE PHOTO: U.S. and Iowa state flags are seen next to a corn field in Grand Mound, Iowa, United States, in this […] There’s no masking Meghan Markle’s style, even when she’s wearing a face covering. The pregnant Duchess of Sussex, 39, was spotted out […]