BERLIN — Germany’s confirmed death toll in the coronavirus pandemic has topped 30,000 as the country hopes its lockdown will bring down case numbers.

The national disease control center, the Robert Koch Institute, said Monday that another 348 deaths were reported over the past 24 hours, bringing the country’s total to 30,126.

The number of confirmed coronavirus cases rose by 10,976 to 1.65 million. That increase is much lower than a week ago, but lower testing and reporting over the Christmas period likely accounts for much of the difference.

Germany had a relatively low death rate in the first phase of the pandemic but has seen hundreds of deaths per day in recent weeks. Among major European nations, Italy, the U.K., France and Spain still have higher death tolls.

A shutdown that was deepened on Dec. 16 with the closure of schools and most shops is scheduled to remain in place until Jan. 10 and appears likely to be extended.

— Russia is now giving its coronavirus vaccine to people over 60

BEIJING — A Chinese court on Monday sentenced a former lawyer who reported on the early stage of the coronavirus outbreak to four years in prison on charges of “picking fights and provoking trouble,” one of her lawyers said.

Zhang, 37, traveled to Wuhan in February and posted on various social media platforms about the outbreak that is believed to have emerged in the central Chinese city late last year.

She was arrested in May amid tough nationwide measures aimed at curbing the outbreak and heavy censorship to deflect criticism of the government’s initial response. Zhang reportedly went on a prolonged hunger strike while in detention, prompting authorities to forcibly feed her, and is said to be in poor health.

MOSCOW — Moscow has started offering a domestically developed coronavirus vaccine to people older than 60 after Russia’s Health Ministry cleared it for use among the elderly.

Earlier this month, mass vaccination against COVID-19 started in Russia with the Sputnik V vaccine, which is still undergoing advanced tests among tens of thousands of people needed to ensure its safety and effectiveness. Front-line workers, such as doctors and teachers, were the first in line to get the shots, and until Saturday only those aged 18-60 were allowed to be vaccinated.

On Saturday, the Health Ministry cleared Sputnik V for use among those older than 60. In Moscow, the elderly can sign up for immunizations starting Monday.

Russian authorities have reported over 3 million confirmed coronavirus infections, the fourth highest caseload in the world, and more than 55,000 deaths. Russia has been swept by a rapid resurgence of the outbreak this fall, with numbers of confirmed infections and deaths significantly exceeding those reported in the spring.

TOKYO — Japan on Monday reported a first victim of the coronavirus from the Japanese parliament — Yuichiro Hata, who has served transport minister under the leadership of a now-defunct opposition party.

Hata, 53, was pronounced dead at a Tokyo hospital Sunday when he arrived after developing a fever. His autopsy confirmed the COVID-19 was the direct cause of his death, said Tetsuro Fukuyama, secretary general of the Constitutional Democratic Party of Japan, where Hata was a member of.

Hata was the son of late former prime minister Tsutomu Hata, who headed the opposition-led government in 1994.

WEST PALM BEACH, Fla. — President Donald Trump has signed a $900 billion pandemic relief package, ending days of drama over his refusal to accept the bipartisan deal that will deliver long-sought cash to businesses and individuals and avert a federal government shutdown.

The massive bill includes $1.4 trillion to fund government agencies through September and contains other end-of-session priorities such as an increase in food stamp benefits.

The signing Sunday, at his private club in Florida came amid escalating criticism over his eleventh-hour demands for larger, $2,000 relief checks and scaled-back spending even though the bill had already passed the House and Senate by wide margins.

His foot-dragging resulted in a lapse in unemployment benefits for millions struggling to make ends meet and threatened a government shutdown in the midst of a pandemic.

NICOSIA, CYPRUS — Cyprus President Nicos Anastasiades said the countdown has started for defeating an “invisible enemy” after receiving the Pfizer-BioNTech vaccine against the coronavirus.

Anastasiades got the shot at a Nicosia health center on Monday, a day after elderly nursing home residents and front-line medical staff were the first to be inoculated.

Praising health care workers for their efforts to help beat back the spread of COVID-19, Anastasiades pleaded with citizens to continue abiding by virus restrictions — including a night-time curfew — despite a pervading sense of fatigue and a curb on individual freedoms.

Anastasiades said Cyprus will procure enough of the vaccine to inoculate the entire population of around 1.1 million, including Turkish Cypriot citizens who live in the ethnically split country’s breakaway north.

BRUSSELS — At 102 years old, Josepha Delmotte will be the first Belgian resident to receive a COVID-19 vaccination in the French-speaking region of Wallonia.

The first COVID-19 vaccinations in the country with 11.5 million inhabitants are taking place Monday in three care homes located across the three main Belgian regions — the Brussels-Capital region, Wallonia and Flanders.

Belgium has been hard hit by the pandemic and reported nearly 639,000 confirmed cases, including 19,200 deaths. More than half of the victims died in nursing homes and the government decided that the elderly and front-line medical workers would receive the vaccine first.

Like other EU countries, Belgium is using the vaccine developed by Pfizer-BioNTech, which has been approved by Europe’s medicines regulator.

JAKARTA, Indonesia — Coronavirus infections have barely touched many of the remote islands of the Pacific, but the pandemic’s fallout has been enormous, disrupting the supply chain that brings crucial food imports and sending prices soaring as tourism wanes.

“We initially started with 5,000 seeds and thought we would finish them in nine months’ time. But there was a very big response, and we finished distributing the seeds in one week,” said Vinesh Kumar of Fiji’s Agriculture Ministry.

The project provides residents with vegetable seeds, saplings and basic farming equipment to help them grow their own home gardens.

Fiji resident Elisabeta Waqa said she had contemplated starting a garden before the pandemic, but — with no job, extra time at home and seeds — she finally took action. Soon her yard transformed into containers of green beans, cucumber, cabbage and other produce.

BANGKOK — The governor of a province at the center of an expanding COVID-19 outbreak in Thailand has been confirmed infected with the coronavirus after meeting with public health officials including the deputy prime minister.

The meeting Sunday attended by the Samut Sakhon governor, Deputy prime minister Anutin Charnvirakul and others was considered at low risk of spreading the virus because everyone wore masks, said Dr. Taweesilp Visanuyotin, a spokesperson for the COVID-19 response center.

The governor, Weerasak Wijitsaengsri, did not have symptoms but will be treated at a hospital, Taweesilp said.

Anutin, who is also Thailand’s public health minister, wrote on Facebook that he tested negative and is isolating at home for 14 days.

Thailand reported 144 new cases Monday, most of them locally transmitted.

SEOUL, South Korea — South Korea has confirmed its first cases of a more contagious variant of COVID-19 that was first identified in the United Kingdom.

The Korea Disease Control and Prevention Agency said Monday the cases have been confirmed in a family of three people who came to South Korea on Dec. 22.

They arrived a day before South Korea halted air travel from Britain until Dec. 31 to guard against the new version of the virus. The three people, who reside in the U.K., are under quarantine in South Korea.

South Korea on Monday registered 808 new coronavirus cases, raising its national caseload to 57,680 with 819 deaths. The government said Sunday it would wait another week before determining whether to enforce its toughest physical distancing rules in the greater Seoul area that officials worry would further hurt the economy.

SYDNEY — Authorities have banned New Year’s Eve revelers from congregating in Sydney’s downtown harborside to see the celebrated fireworks due to the pandemic risk.

New South Wales state Premier Gladys Berejiklian said on Monday people who live in the city center can invite up to 10 guests to their homes to celebrate. The guests will have to apply for permits to enter the area.

Australia’s largest city recorded five new cases of COVID-19 connected to a cluster in the northern beaches region, bringing the total to 126 infections since Dec. 10.

Around 1 million people usually congregate on the harbor to see the annual fireworks.

COLOMBO, Sri Lanka — Sri Lanka’s government announced Monday that cinemas will be allowed to reopen throughout the country on Jan. 1 after being closed for three months because of the coronavirus.

The reopening, which will require the following of strict health guidelines, is part of the island nation’s efforts to return to normalcy despite lockdowns in different parts of the country.

Patrons will be required to wear face masks and have their body temperatures taken before entering the cinemas. Seats will be kept vacant between patrons and cinemas can admit only 25% of their normal capacity. Consumption of food and drinks will not be allowed.

LOS ANGELES — State officials are expected to extend the strictest stay-at-home orders in central and Southern California as hospitals there are quickly running out of intensive care unit beds for coronavirus patients ahead of the presumed post-holiday surge.

The situation is already dire, and the worst is expected to come in the next few weeks after Christmas and New Year’s travelers return home.

State stay-at-home orders for the San Joaquin Valley and Southern California are set to expire Monday. State officials say the orders are likely to be extended but did not make a definitive ruling Sunday afternoon.

America passed that mark on Sunday, just six days after it reached 18 million. The nation’s case numbers have more than doubled in less than two months.

COVID-19 deaths in the U.S. also have been rising, and now total more than 333,000. That’s more than one death for every 1,000 Americans. The U.S. population as of Saturday was about 331 million, according to the U.S. Census Bureau.

The United States accounts for about 4% of the world’s population, but close to 24% of its total coronavirus cases and 19% of its COVID-19 deaths. Health experts believe many cases have gone unreported, however, both in America and internationally. 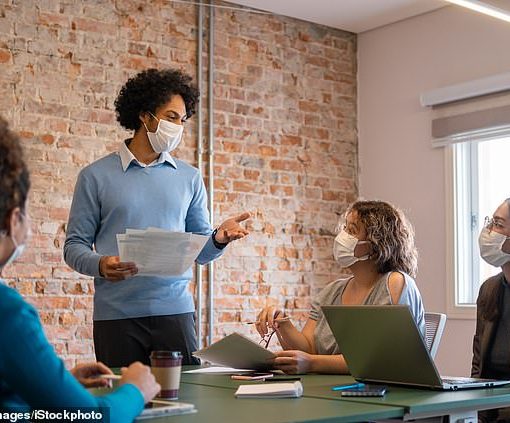 HEPA air cleaners and face masks can reduce the exposure to Covid-infected particles in a room by up to 90%, CDC report […]

The U.N.’s child protection agency is urging governments to pour more money and resources into preserving the mental well-being of children and […] From overeating to enjoying too much sugar, maintaining a healthy weight can be a struggle for some people. Claire Taylor, now 52, […] 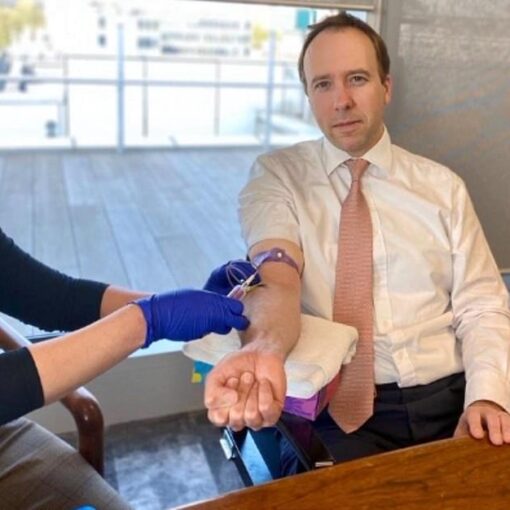 Injecting critically ill coronavirus patients with the blood of survivors does not boost their chances of getting better, a major study has […]