Even for the legendary Comedy Store on Sunset Boulevard, it was turning into quite an aftershow party.

It was a September in the 1980s, the early hours, and guests were devouring industrial quantities of drink and drugs.

Set back from the others in a dimly lit recess, the showbusiness royalty of the day held court.

A newly discovered photograph freezes the moment in time: Burt Reynolds and his then lover Sally Field gather around country star Willie Nelson, strumming his guitar, while Richard Pryor, then America’s biggest name in comedy, presses his hand mock-theatrically to his face. 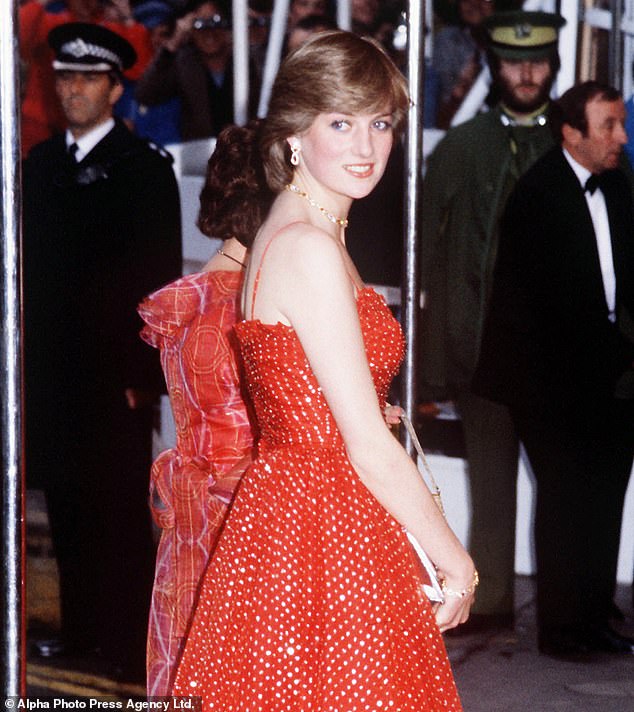 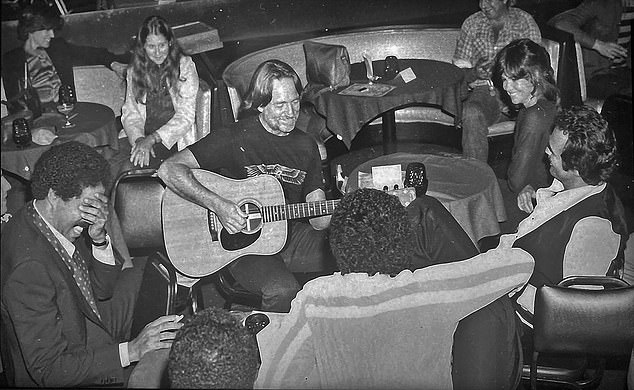 Burt Reynolds and his then lover Sally Field gather around country star Willie Nelson, strumming his guitar, while Richard Pryor, then America’s biggest name in comedy, presses his hand mock-theatrically to his face 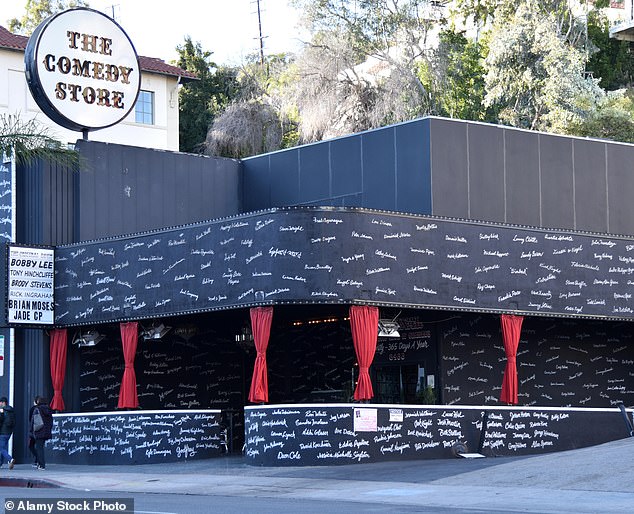 It was a September in the 1980s, the early hours, and guests were devouring industrial quantities of drink and drugs at the legendary Comedy Store on Sunset Boulevard

But who is the young woman sitting in a booth in the top left corner, elegant in a silk blouse, taking in the remarkable scene and sharing a joke with another guest?

According to Hollywood director Mike Binder (whose face is captured in profile just behind Pryor) it is none other than Princess Diana.

Apparently she arrived with her lady-in-waiting and, according to Mr Binder, ‘joined in the fun’ until 4am.

While she witnessed drug-taking ‘as we weren’t discreet, she didn’t indulge’. There is no suggestion Sally Field or Willie Nelson were taking drugs.

Almost as synonymous with excess in those days as comedy, the Los Angeles club – which launched the careers of Jim Carrey, Robin Williams, Roseanne Barr and David Letterman among others – is the last place one would expect the wife of the future King to hang out.

It is a staggering claim and Mr Binder is evidently wrong.

Aside from anything else, the woman in the picture bears little resemblance to Diana. Even allowing for some trickery of light, she has dark hair not blonde. 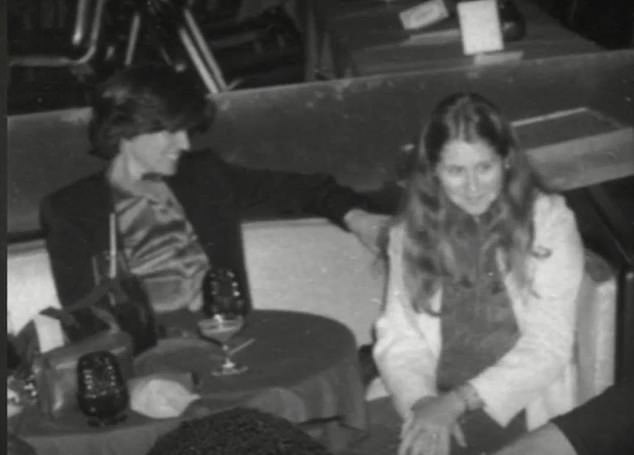 But who is the young woman sitting in a booth in the top left corner, elegant in a silk blouse, taking in the remarkable scene and sharing a joke with another guest?

What elevates this from a silly case of mistaken identity to something altogether more damaging, however, is that Binder tells the story, unchallenged, in his acclaimed five-part TV documentary about the club’s history, which was watched by millions in the US and is now available in the UK on Sky.

The Mail on Sunday can reveal that the claim, which comes in the wake of the accuracy row over Netflix’s The Crown, has led to an extraordinary war of words between Binder and Jennifer Lee Pryor, the widow of Richard Pryor, whose recollection of the night is rather different.

Not least because Jennifer insists she is the woman Binder claims is Diana – and says she still owns the grey silk blouse in the picture.

Furthermore she claims Binder admitted to her that he was mistaken.

At the time, The Comedy Store, made by US network Showtime, was already airing and, according to her, Binder said that it was ‘too late’ to change it.

If she is right, then clearly no one thought to check the story more carefully before broadcast. It is understood that Sky is now investigating.

As the photo appears on screen during the fourth episode, Binder tells comedian Joe Rogan: ‘I have a picture of the night that Pryor came in and afterwards Mitzi [Shore, the club owner] would just let us lock the club and stay up all night… 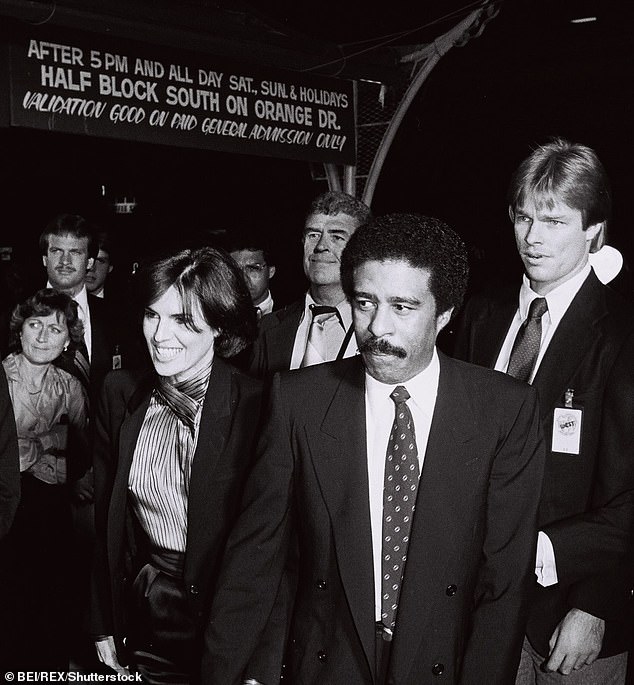 ‘Willie Nelson grabbed his guitar and Burt Reynolds, Sally Field, and Sugar Ray, and Lady Diana is sitting in a booth!’

Rogan replies: ‘What? Lady Di was at the Comedy Store?

Binder: ‘Yeah… We were there until five or six in the morning.’

When The Mail on Sunday contacted Mr Binder, he was resolutely standing by his story.

He spoke enthusiastically about the night, claiming he ‘vividly’ remembers Diana and that ‘she had a really good time’.

‘Richard [Pryor] did an impromptu performance and the public left and it was just us, locked in with Princess Di, until like 4am.

‘Robin Williams was there that night but he wasn’t in the picture. Everyone who was anyone came to the Store. We had Beatles, the Bee Gees, everyone. When Di came it wasn’t a big deal.

‘All the celebrities wanted to see Richard Pryor. He would show up with huge celebrities.

‘That’s what happened that night. She was a princess but we had the king of comedy in the house. It might sound crazy but, honestly, it wasn’t a big deal. We let her be.’

Binder, a former comic, is an award-winning writer, producer and director who spent two and a half years working on the series which, says Sky, ‘chronicles the evolution of comedy at the iconic LA club, brought to life through emotional interviews and never-before-seen footage with some of the biggest names in comedy including Whoopi Goldberg, Jim Carrey, Richard Pryor and Chris Rock’.

Binder said: ‘Diana was great fun. I’d met her before.

‘Jonathan Pryce was in one of my movies. He was doing Miss Saigon and we were sitting in the Dorchester and she came by and stopped and said hello to him. 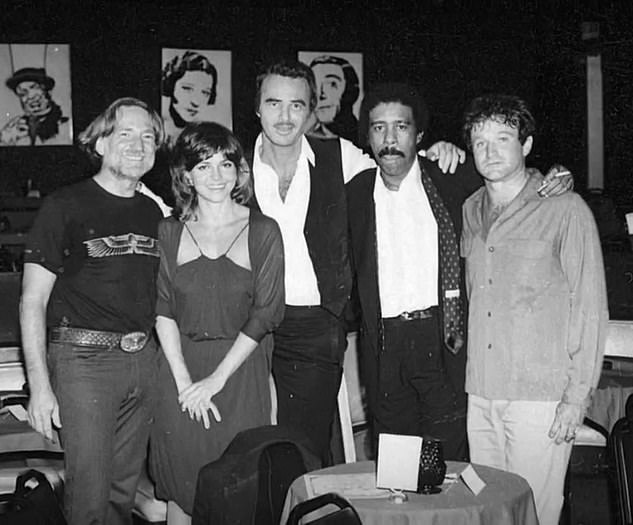 ‘I wanted to bring that moment up that night [in the Comedy Store] but I didn’t. Diana was lovely.

‘I have to be honest, I don’t remember much about that night because I was loaded. I’m 35 years sober now but back then I was pretty crazy.

‘But we were excited to have Di there. Everyone knew she was there, we’ve talked about it for years, we just didn’t make a big deal of it.

‘It was dark in that room. People in there [members of the public] didn’t even know she was there until they left and we were shut in.

‘That room is a deep cavernous room, all the walls are black, and she’s in a deep booth in the back.

‘She had a really good time. There were only about 20 people in there. We were all higher than a kite.’

While researching the series Binder unearthed the photograph in an LA storage unit belonging to Mitzi Shore’s family. ‘I stumbled into a treasure trove,’ he recalled. 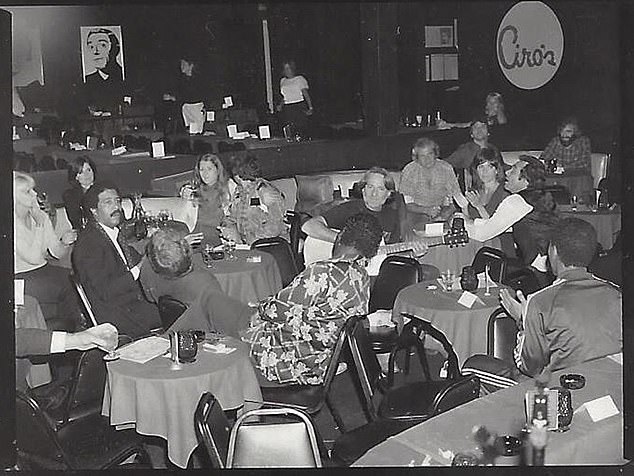 The series ‘chronicles the evolution of comedy at the iconic LA club, brought to life through emotional interviews and never-before-seen footage with some of the biggest names in comedy’

A few months ago Binder said his actor friend Owen Wilson called him to say he was at Willie Nelson’s house.

‘So I sent him the picture on my phone and asked Willie if he remembers this night,’ said Binder. ‘And Willie says: “Yeah, and I wished I’d passed the hat”.

‘She loved the fact she could chill out, have a laugh and not be the centre of attention. We were all in a really great place. And we were glad she was there and so was she.’

This, then, is Mike Binder’s version of events, albeit one recalled through the fog of drink and drugs. But what of Jennifer Lee Pryor who was also there that night?

‘That’s me in the picture – and Mike Binder knows it,’ she told The Mail on Sunday.

‘This is a con. I told him to tell Showtime [the US TV network] the truth. I have the contact sheet of other photographs taken that night which clearly shows that the woman he says is Diana is me. I confronted Mike.

‘He came to me and asked me to work on the show with him when he was post [editing].

He said: ‘I found out too late that it was you and I couldn’t correct it.’ ‘

Jennifer says she has pinpointed the date of the photograph – September 24, 1981, when Diana was on holiday with Prince Charles at Balmoral.

A meticulous diarist, Jennifer’s entry for that date reveals she attended the premiere of the Burt Reynolds film Paternity. 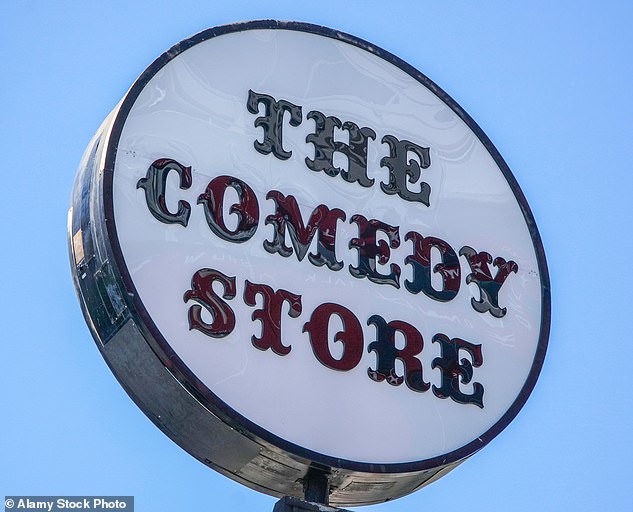 The Comedy Store, made by US network Showtime, was already airing, according to Jennifer Lee Pryor

Indeed, a photograph from that night, unearthed by The Mail on Sunday, shows her hand in hand with her husband outside the film theatre on Hollywood Boulevard – a four-minute drive from the Comedy Store.

She appears to be wearing the same blouse from the ‘Diana’ picture.

Jennifer recalls: ‘At the time we were renting a house because Richard was putting together a TV show, Live In Concert From The Sunset Strip, and he was at the Comedy Store working on new material every night.

‘Richard got up on stage and then we were locked in the club and Willie gave us a private concert. It was great. A magical atmosphere.

‘When we left in the limo Richard and I started fighting and he kicked me out of the car.

‘Robin [Williams] was behind us and his car stopped and picked me up and brought me back to the house.’ She added: ‘For Mike to do this is ridiculous. He’s cashing in on Princess Di’s memory.

‘It’s disgusting. Diana had blonde hair. The woman in the picture has black hair. It’s me!

‘I take objection to his trying to erase me from history.’

‘Princess Diana wasn’t there,’ she said. ‘I remember the entire night. Jennifer ended up having a row with Richard in the limo on the way back to their house, where Willie and I were staying.

‘If Diana had been in that room don’t you think we would have made a massive deal about it? She wasn’t there and I don’t know why anyone would say otherwise.’

Despite these accounts, Binder was still maintaining last week that his version is correct.

He said: ‘Diana was there. It’s not just me saying it. Others remember it. Jennifer is sending me all these horrible messages. She remembers it one way, I – and lots of other comics – remember it another way.

‘I’m not going to get into a public slanging match with her. I stick by my story.’

A final word on the matter from his publicist, however, would appear to suggest otherwise.

She said: ‘That might well be Jennifer Pryor and not Diana in the photograph. But Mr Binder is very clear that the show was already done by the time he found out it might not be Diana.

‘There was absolutely no intent to mislead anybody or be malicious in any way.

‘There was no attempt to use the photograph or the Diana story to gain exposure for the show. It was just a tiny little flash and it represented his recollection at the time.’

Both Jennifer and Connie disputed Binder’s claim that drugs were openly taken on the night.

Jennifer said: ‘There was no cocaine flowing that night – Willie and Connie Nelson, Bert Reynolds and Sally Field – were not users of cocaine.

Connie added: ‘Willie and I both stayed away from cocaine – I had my kids and Willie would say to his band and crew, “If you’re wired you’re fired!”.’ 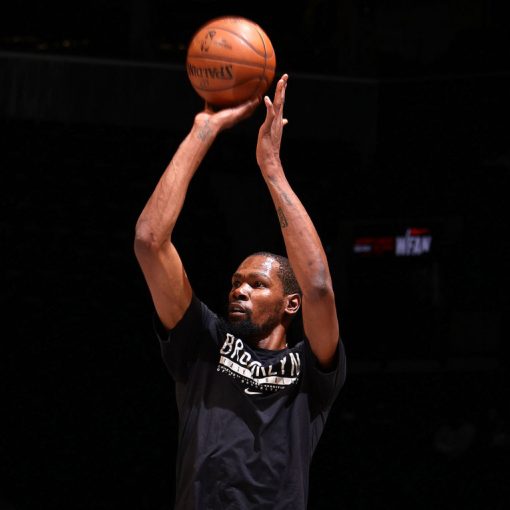 The Nets could be back up to a Big 2, with Kevin Durant upgraded to questionable for Friday night’s game at Barclays […] 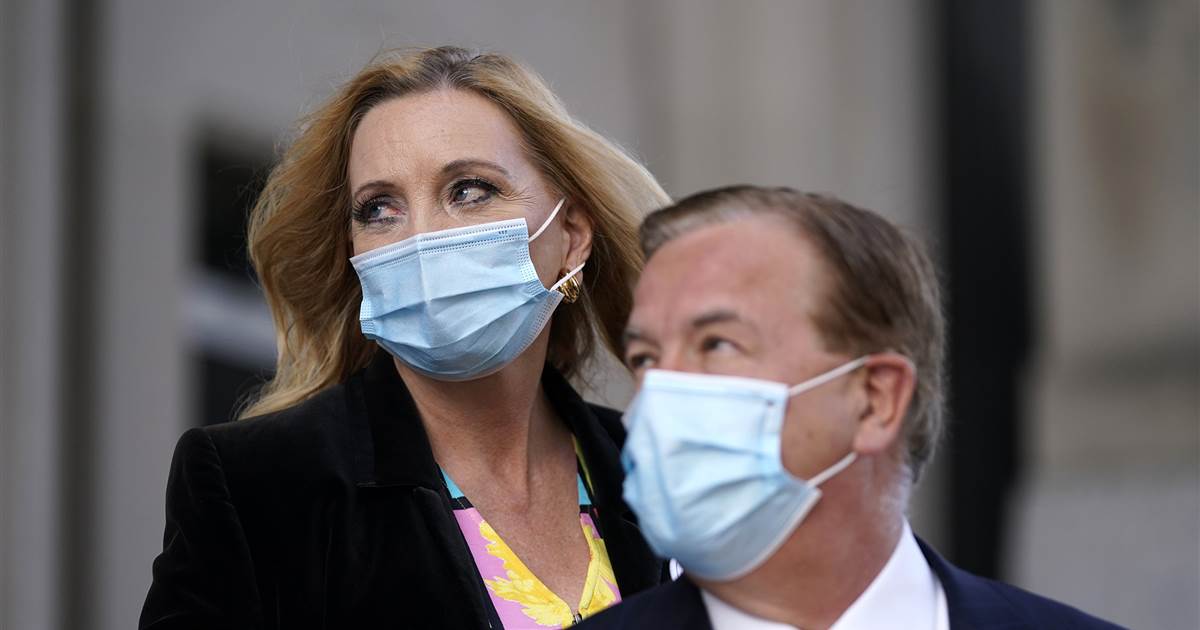 ST. LOUIS — A St. Louis couple celebrated in some circles and vilified in others for waving guns at protesters marching on […]