Formula One driver Romain Grosjean had a miraculous escape after his car exploded into a fireball in a horrific 140mph crash that split the vehicle in two at the Bahrain Grand Prix.

In shocking footage, the Frenchman’s car hit the wall and burst into a ball of flames, sending him through the barriers as TV cameras cut away and the race was stopped.

Despite the horrific crash, Grosjean was able to walk away before being airlifted to hospital after suffering burns and broken ribs. 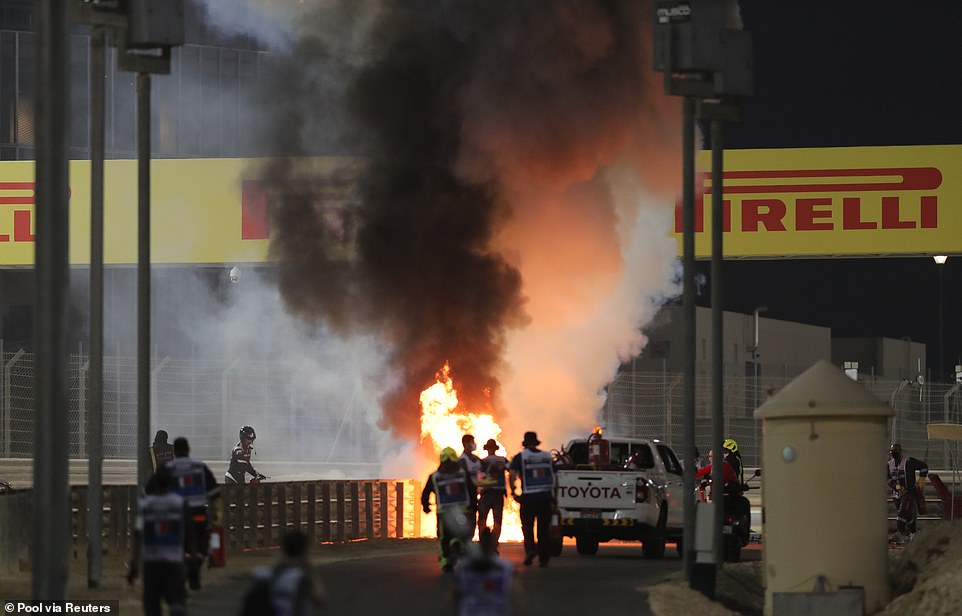 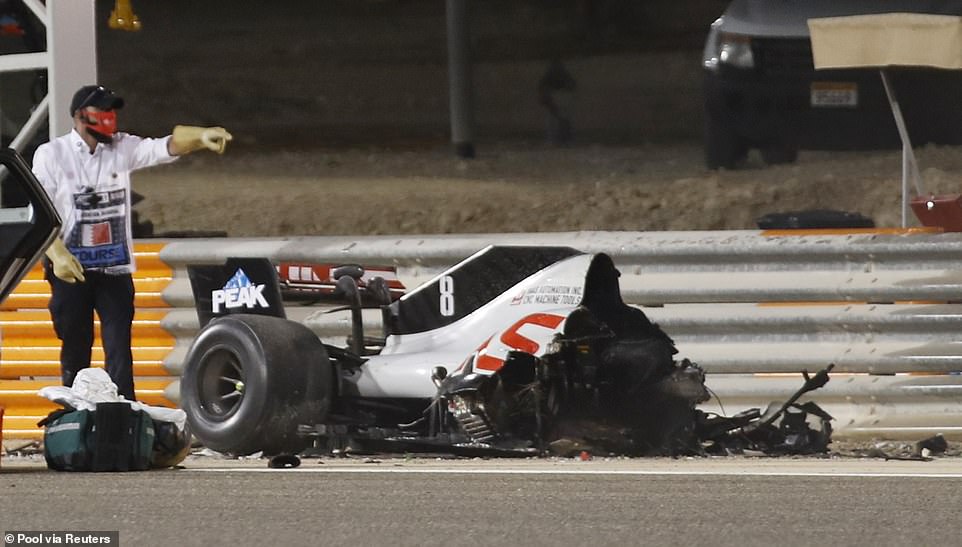 A horrific crash to start the #BahrainGP this evening. Thankfully, Romain Grosjean survived this hit and seems to be okay 🙏

He was helped into an ambulance by marshals and limped as he did so. He suffered minor burns to his hands and ankles. It is also suspected that Grosjean has sustained broken ribs.

Grosjean has been taken to the BDF Military Hospital for further treatment, the FIA confirmed.

It is unusual for a Formula One car to self-combust and it remains unclear precisely what happened – though he collided with Daniil Kvyat before hurtling off at the third corner of the first lap. 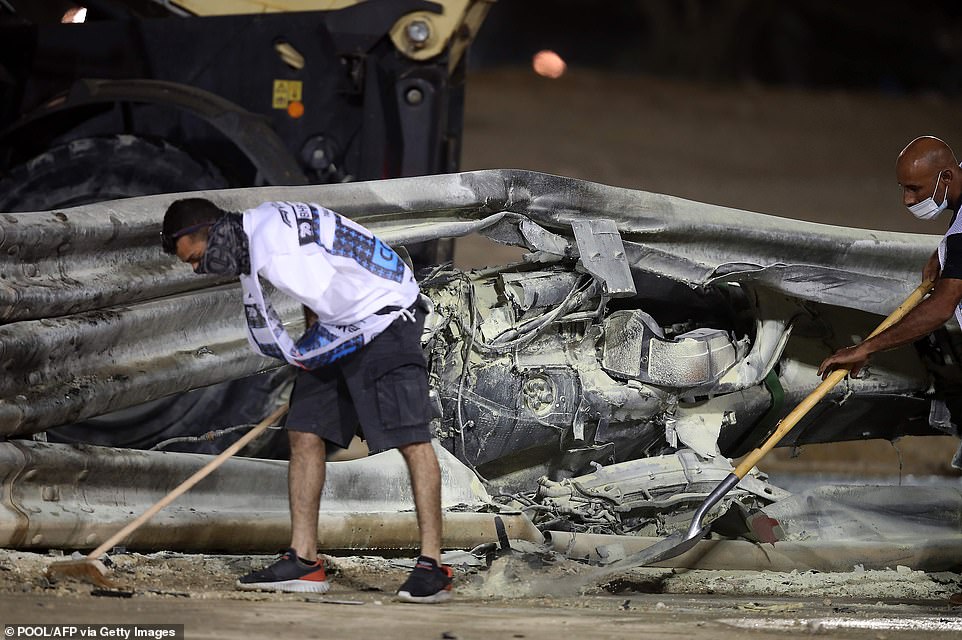 The remains of Grosjean’s car, which broke into two after the crash, was cleared from the track 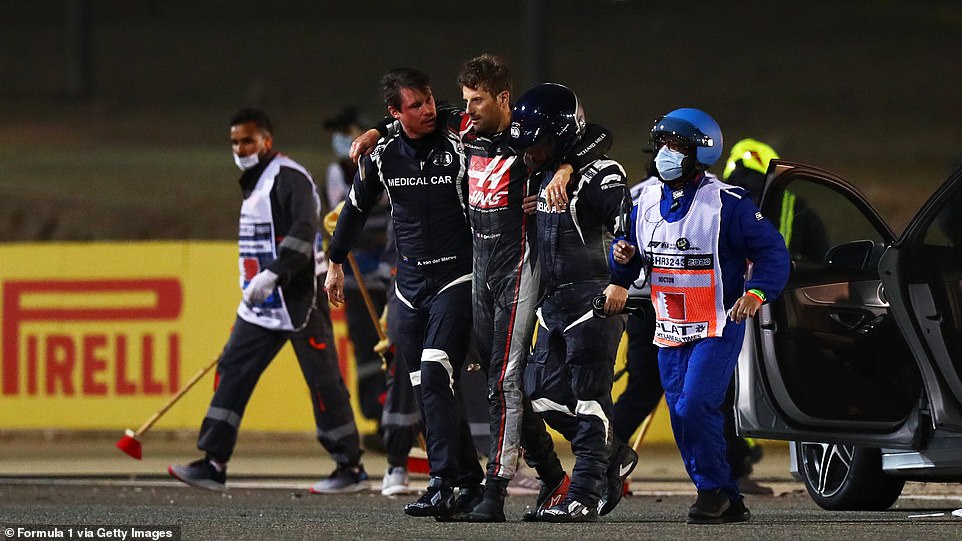 TV replays later showed him scrambling out of the car as marshals sprayed the scene to douse the flames. Grosjean spent 26 seconds in total inside the wreckage of his vehicle.

It was a remarkable accident and part of his car penetrated the barrier and a stray wheel jumped over the wall.

Having travelled through the barriers, he climbed to safety by hurdling the wall and returning on the trackside.

Footage seen after the incident revealed that Grosjean had moved to the right of the track before clipping the front wheel of Kyvat’s AlphaTauri car. The Frenchman then lost control and careered straight into the wall. 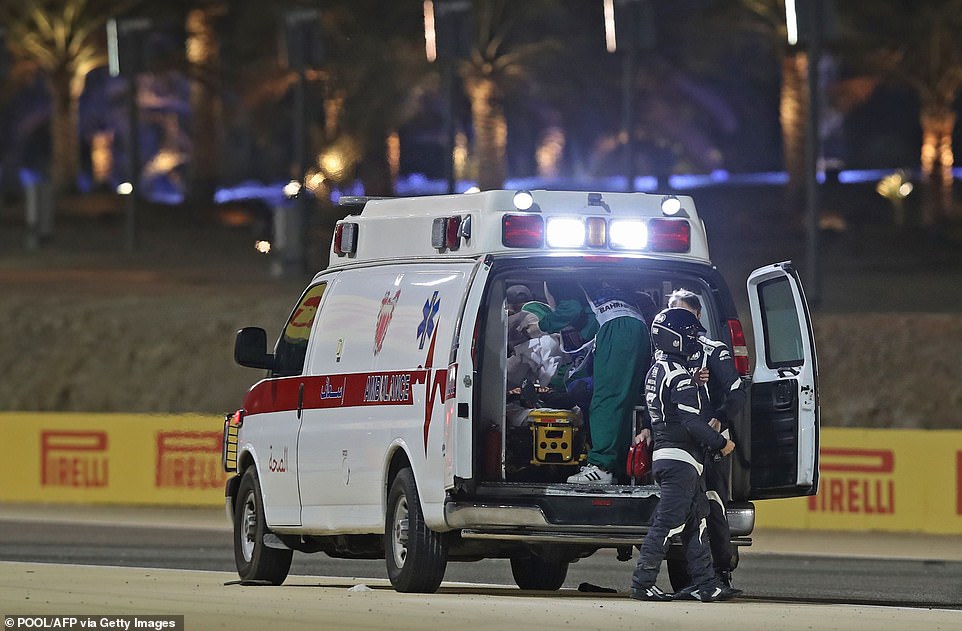 Grosjean, who was taken to the medical centre, suffered minor burns and also broken ribs 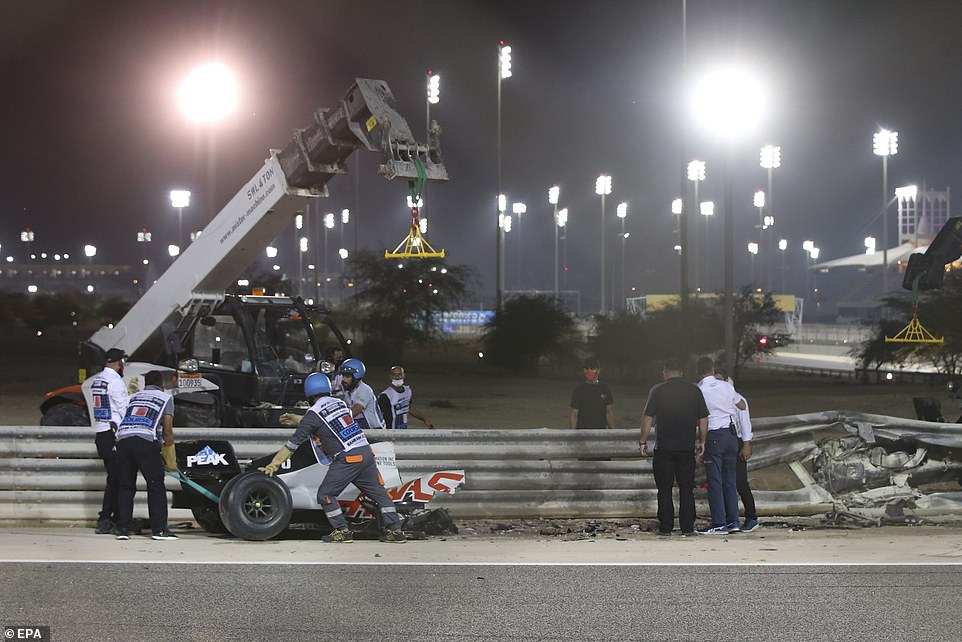 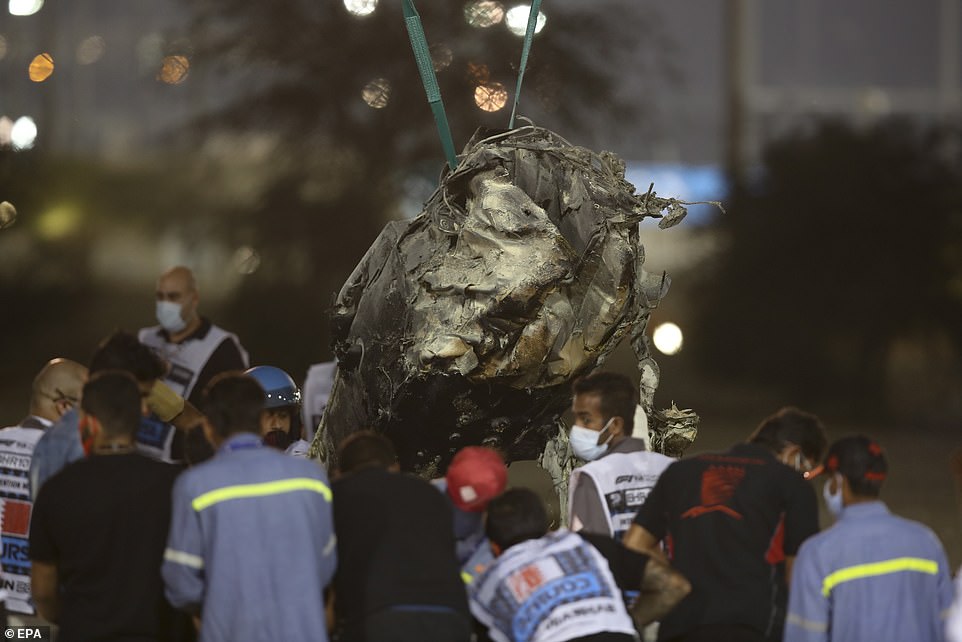 The driver of the medical car, Alan van der Merwe, said: ‘Big surprise for us, we have never seen that much fire in 12 years, and an impact like that.

‘We took a bit of time to process what was going on, and then Romain got out of the car himself which was pretty amazing.

‘It goes to show that all the systems that we have developed, everything worked – like halo, seatbelt, and barriers.’

A delay of at least 45 minutes is expected to take place while work to clean up the horror crash and repair the barrier is carried out. It is unclear whether the race will continue at all, however. 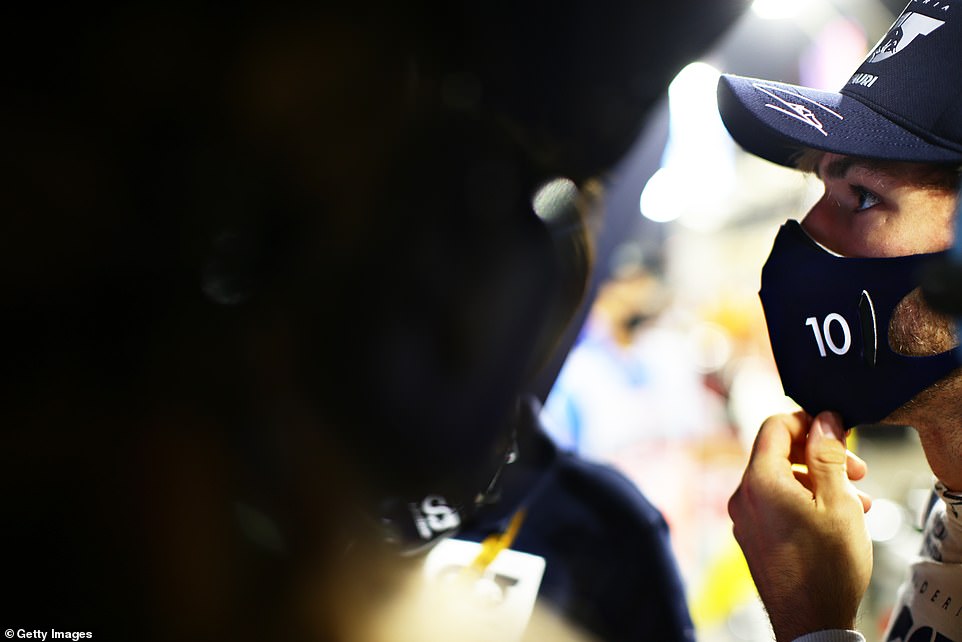 Lewis Hamilton, who started the race in pole position, was seen shaking his head after watching a replay of the collision.

He soon took to Twitter and wrote: ‘I’m so grateful Romain is safe. Wow… the risk we take is no joke, for those of you out there that forget that we put our life on the line for this sport and for what we love to do.

‘Thankful to the FIA for the massive strides we’ve taken for Romain to walk away from that safely.’

Shaken Haas team principal Guenther Steiner told Sky Sports: ‘[Grosjean] is doing OK. He has light burns on hands and ankles. Obviously he is shaking and going through all the checks but he’s fine.

I’m so grateful Romain is safe. Wow… the risk we take is no joke, for those of you out there that forget that we put our life on the line for this sport and for what we love to do. Thankful to the FIA for the massive strides we’ve taken for Romain to walk away from that safely https://t.co/dG8AXmsbKN 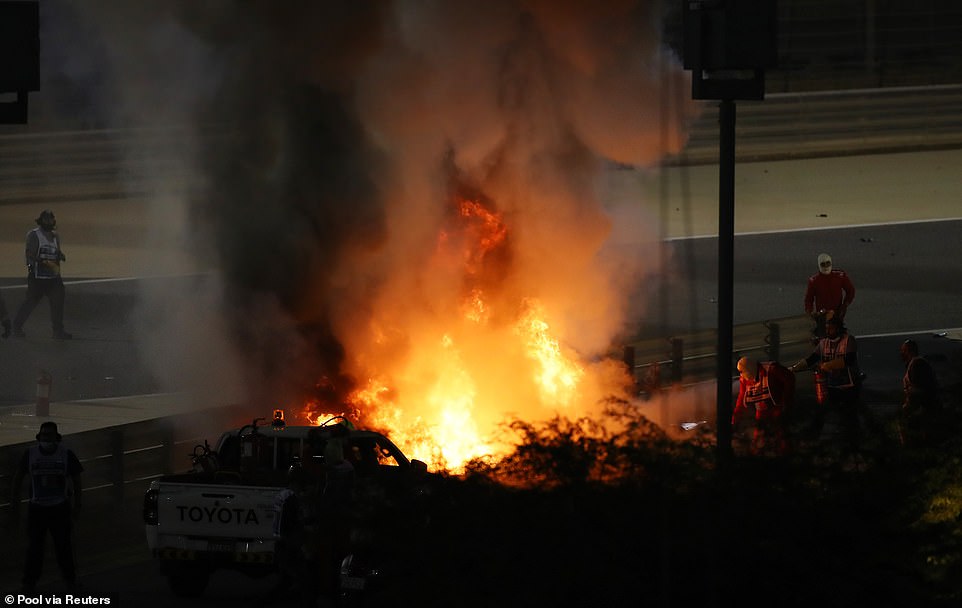 ‘He’s seems to be OK and the rescue was very quick. The marshals and FIA did a great job. It was very scary.

‘We were lucky by being unlucky. He got a way with it I think.

‘It looked like he went across the track with the front wheel and went full speed in the barrier. But I’ve only seen what you guys have seen.’ 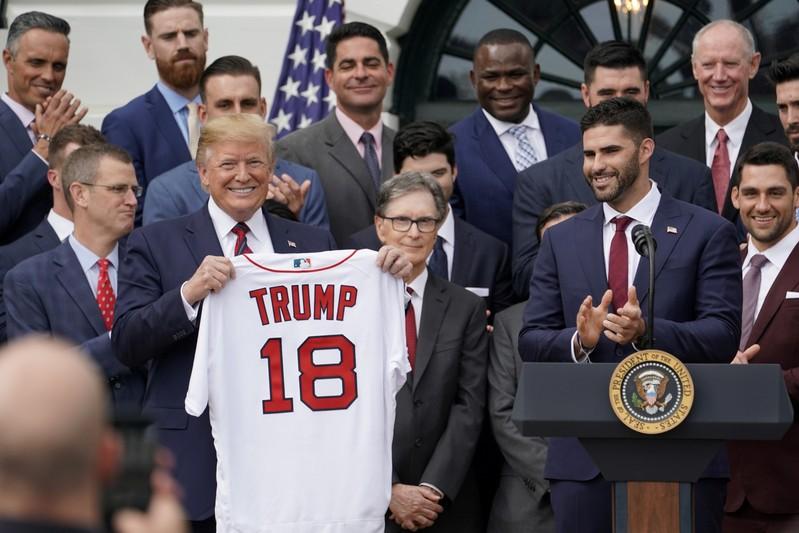