Europe’s coronavirus second wave may have begun among fruit pickers in northern Spain before being spread across the continent by tourists, new research suggests.

Scientists have identified a new strain of the virus that they believe is responsible for a large part of the second wave, which first emerged in June in northern Spain.

From there it spread to countries including Germany, Italy, Sweden, Belgium, France, the Netherlands, UK and Ireland – likely carried by tourists as borders reopened.

Once it got into local communities it spread like wildfire, and in September accounted for up to 70 per cent of cases in some of those countries. 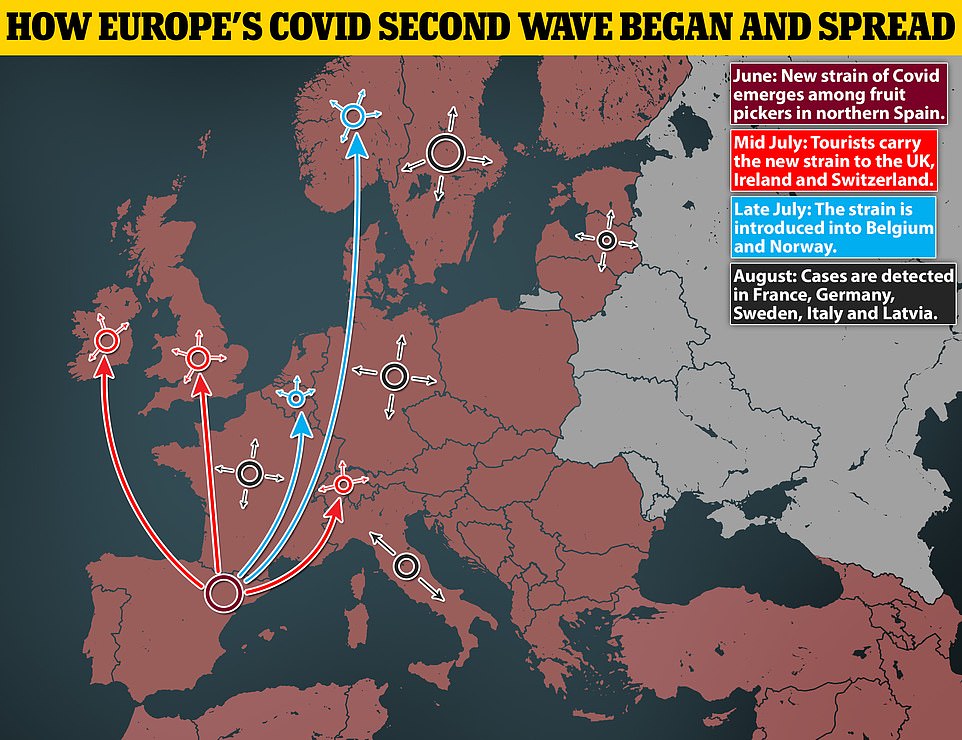 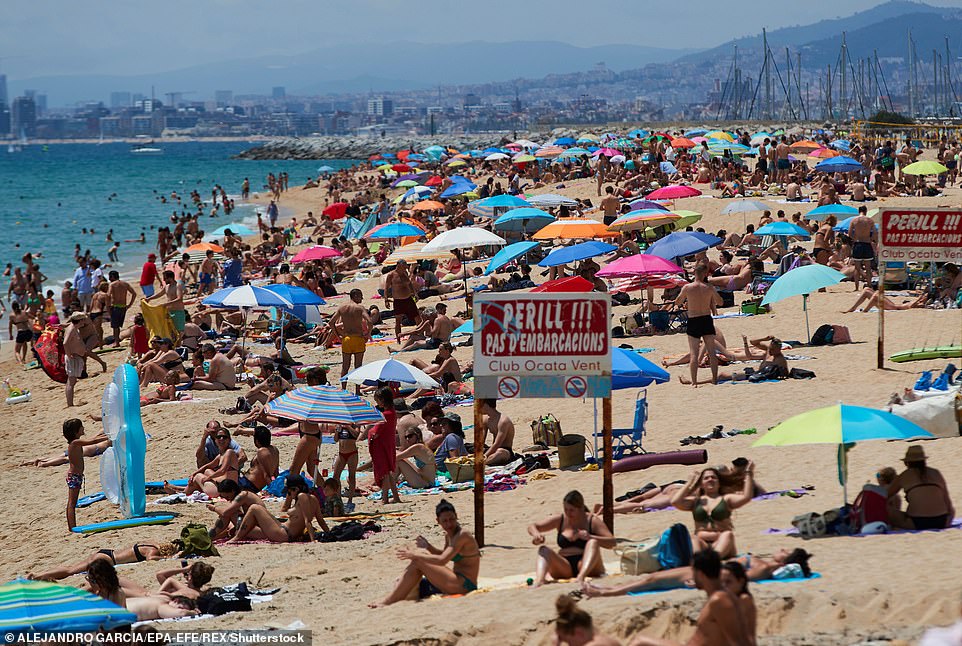 Europe was hit hard by the second wave of coronavirus, with cases rising faster than on any other continent until new lockdowns brought the spread under control.

There have now been more than 16million cases confirmed on the continent and 366,000 deaths, according to the European Center for Disease Control.

Data reveals the second wave began during June and July before cases sky-rocketed in September as cold weather arrived – which causes respiratory infections to spread faster – but its exact origins have remained a mystery, until now.

A new paper, published in October suggests that much of the second wave can be traced back to an outbreak of a new strain of the virus which began in northern Spain.

The new strain is not a fresh mutation, so vaccines in development will still work on it, but is a slightly different variant of the virus which emerged in Wuhan.

It is not clear exactly where this strain – called 20A.EU1 – originated, but it was first detected among fruit pickers in Catalonia and Aragon provinces, located along the border with France.

Fruit pickers typically live in overcrowded housing with poor sanitation or out on the streets, conditions which are ideal for spreading disease.

Scientists say the earliest sample of the virus was found on June 20, just a day before Spain opened its borders to EU tourists. 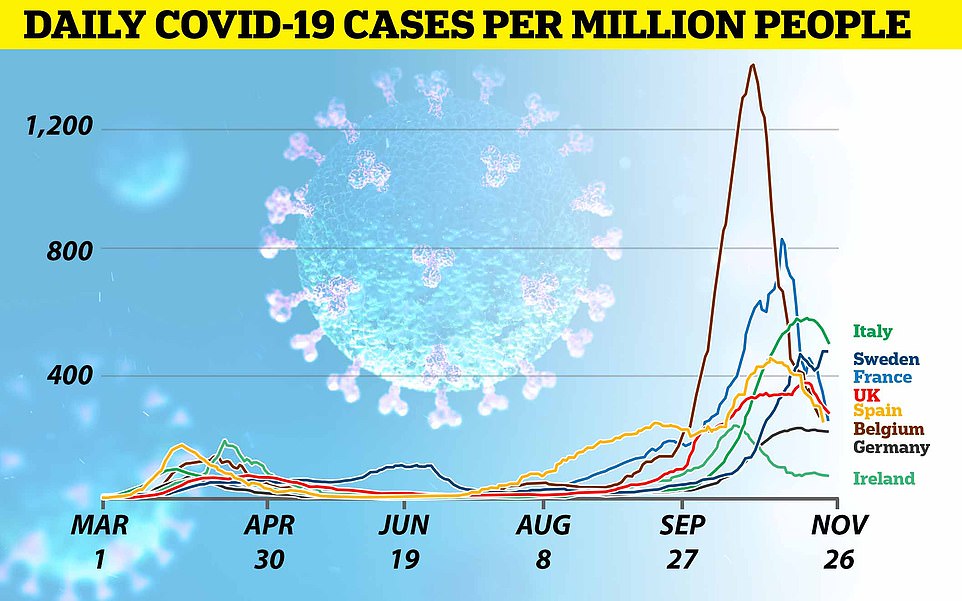 Spain was among the first countries in Europe to suffer from a coronavirus second wave, with cases rising rapidly in late summer (in orange), before it spread to the rest of Europe 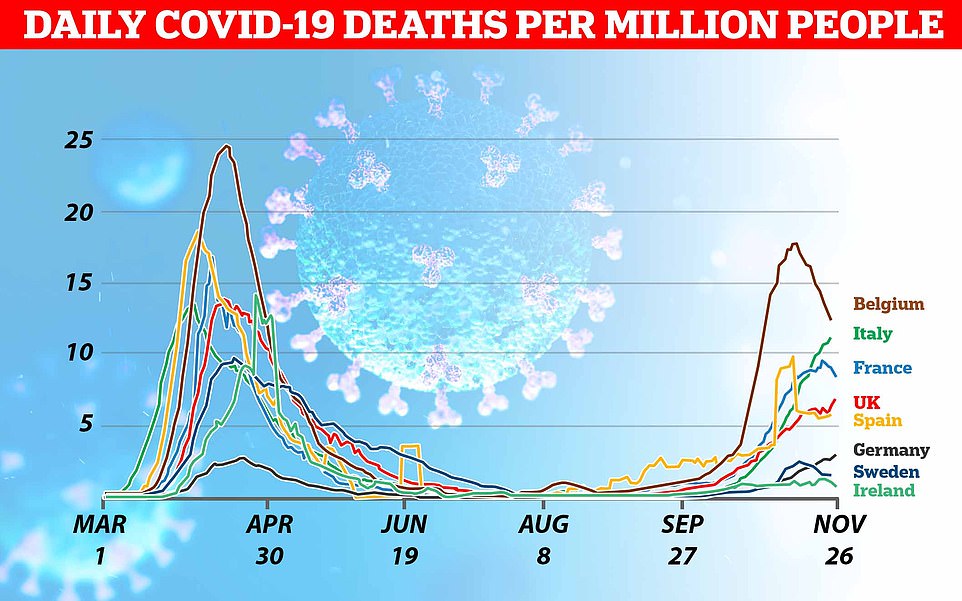 Deaths from coronavirus during the second wave are still far below the first thanks to improved treatments and testing giving advanced notice of outbreaks, but are still mounting

It was then detected in the UK, Ireland and Switzerland in mid July, likely carried back by tourists who had taken advantage of the newly-relaxed border restrictions after months shut up at home in strict lockdown.

By the end of July, samples from Belgium and Norway showed the virus had travelled there, while more samples showed up in the UK and Ireland.

And in August, tests on viral samples from Italy, Germany, Sweden, France and Latvia showed the strain had also reached those countries.

The strain has also appeared in the Netherlands, though exactly when it first arrived there is unclear from the study.

Once in those countries the strain spread like wildfire, likely because ‘air bridges’ meant that those who returned home without symptoms did not need to isolate.

Others may have simply ignored guidance. A major outbreak in Bolton, in northern England, was traced back to a holidaymaker who had returned from Ibiza and failed to quarantine.

By September, the new strain of the virus accounted for more than 70 per cent of samples the researchers studied in Switzerland, Ireland, and the UK.

The virus was also ‘prevalent’ in Norway, Latvia, the Netherlands, and France, the researchers said.

Many of those countries affected by the new strain – Netherlands, Belgium, the UK and France – were among those hardest-hit by the second wave. 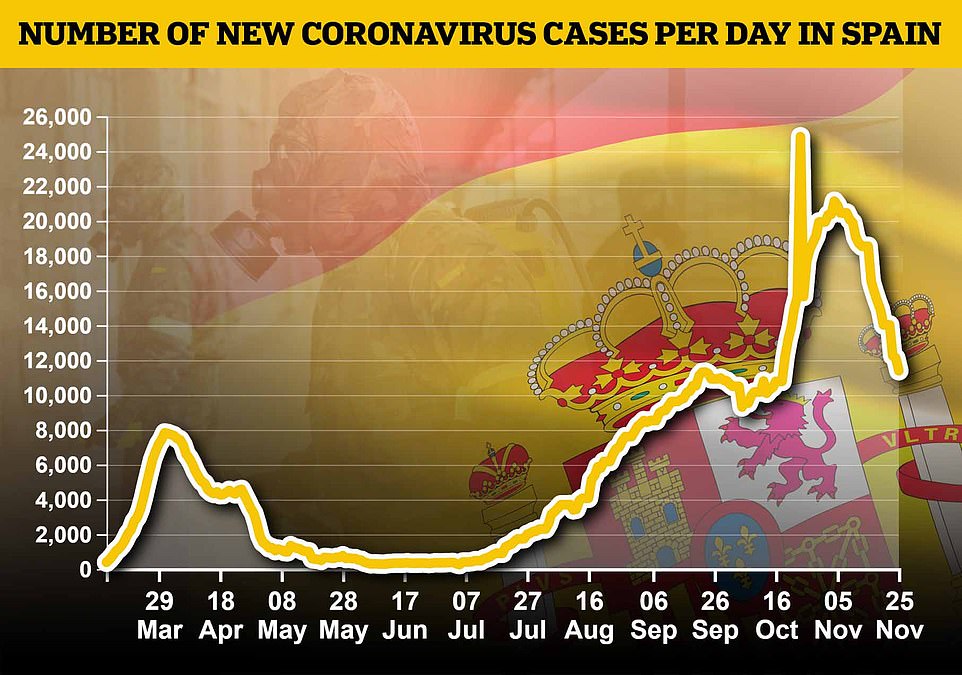 Spain’s coronavirus infections bottomed out in June before starting to rise in July, shortly after the new strain emerged, and then rose rapidly through late summer and into autumn 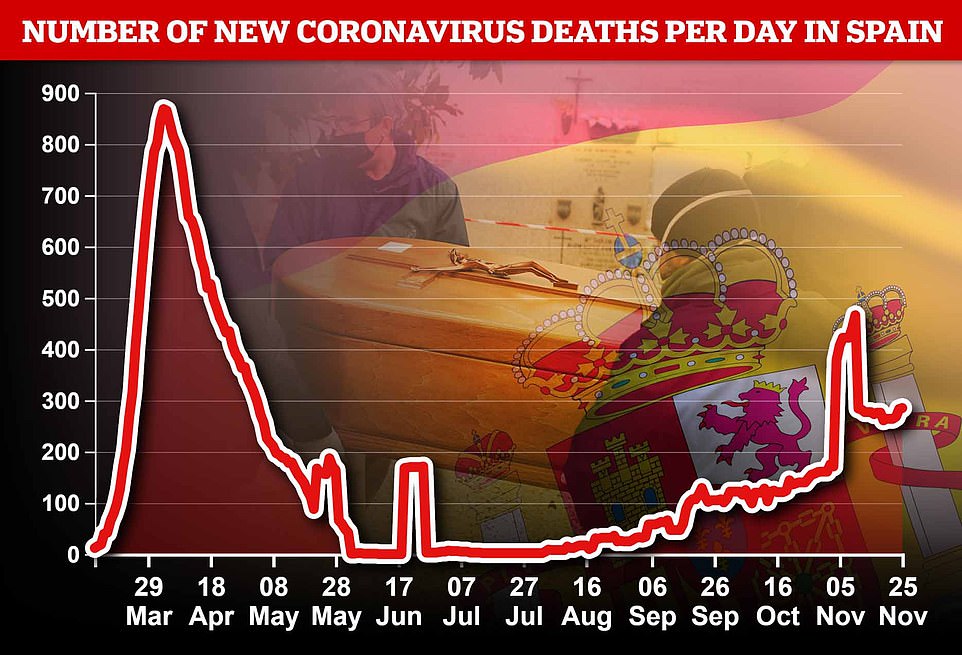 Deaths during the second wave of coronavirus have not kept pace with the first wave, but have been rapidly rising in Spain in recent weeks

All of those countries have since gone back into a version of full lockdown to bring cases under control.

The virus is also rising rapidly in Sweden, which has so far resisted a lockdown but has brought in some harsher measures to control the spread.

Quite why the virus spread so quickly is unclear.

Scientists say it is possible the new strain is more infectious than previous strains, but could simply have emerged at the just right moment – as borders reopened and domestic lockdown rules were relaxed – to spread widely.

The study concludes: ‘Our analysis highlights that countries should carefully consider their approach to travellers from areas with high SARS-CoV-2 incidence when travel resumes across Europe.

‘Whether the 20A.EU1 cluster identified here has rapidly spread due to a transmission advantage or due to epidemiological factors alone, its introduction and rise in prevalence in multiple countries implies that the summer travel guidelines and restrictions were generally not sufficient to prevent onward transmission.

‘While long-term travel restrictions and border closures are not tenable or desirable, identifying better ways to reduce the risk of introducing variants, and ensuring that those which are introduced do not go on to spread widely, will help countries maintain often hard-won low levels of SARS-CoV-2 transmission.’ 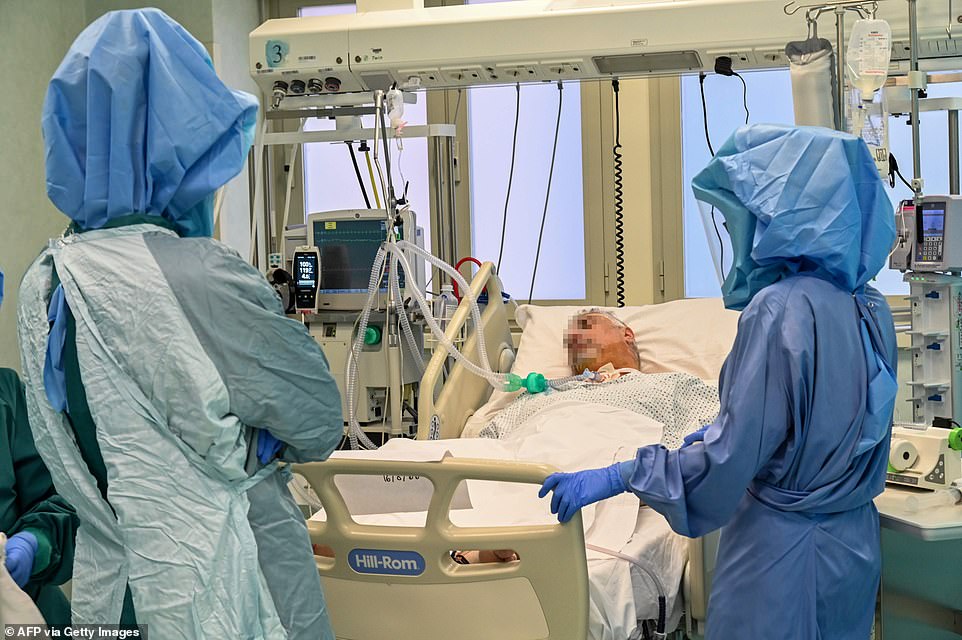 Europe has been hit hard by a coronavirus second wave that saw cases rise faster than any other continent until lockdowns helped reduce the spread (pictured, a patient is treated with a ventilator in Italy) 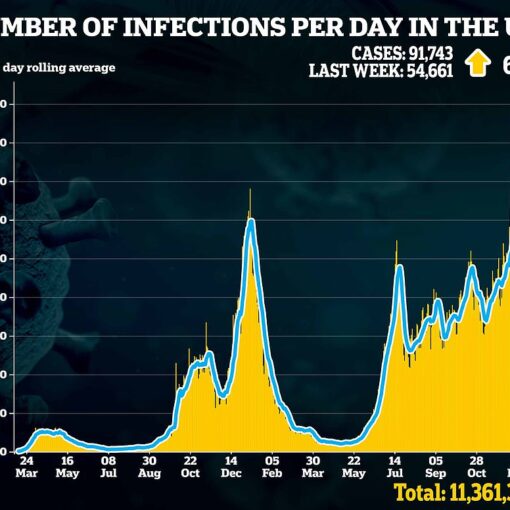 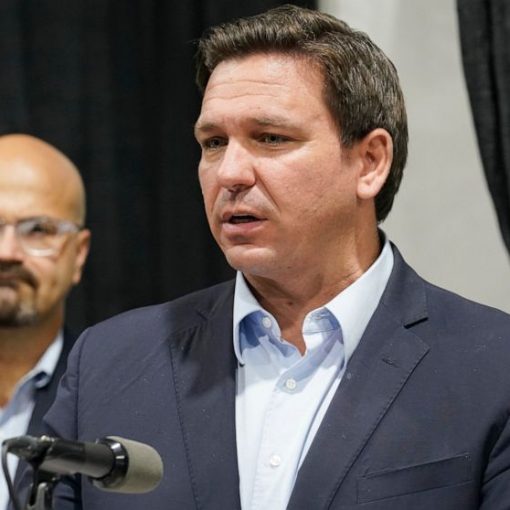 The state of Florida has docked a school district more than $164,000 for defying a ban on classroom mask mandates and for […] 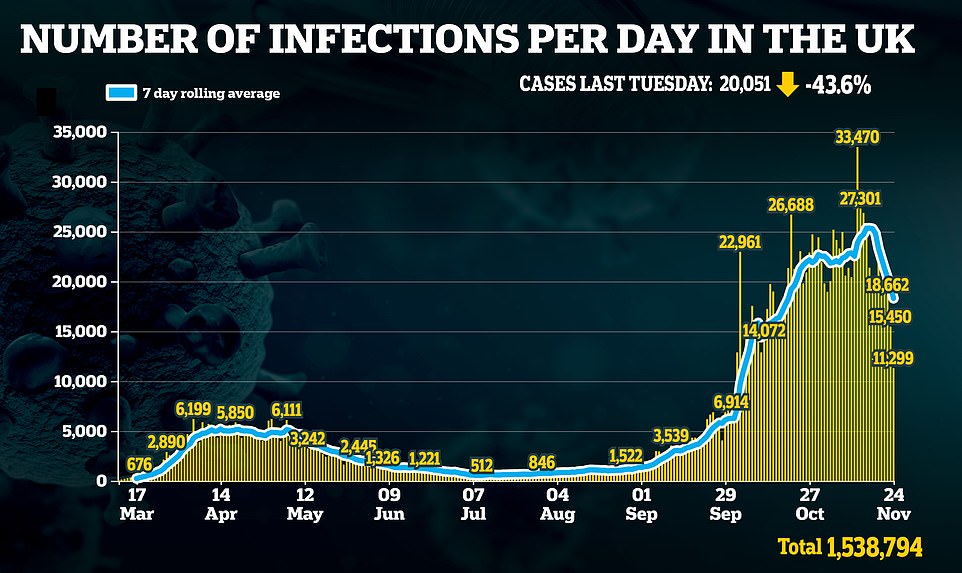 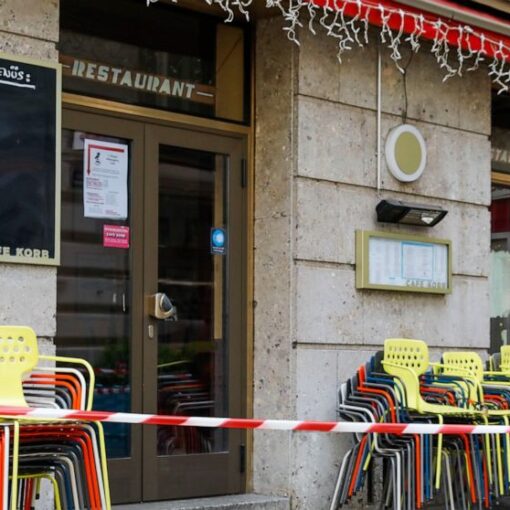 Austria has ended lockdown restrictions for vaccinated people across most of the country By EMILY SCHULTHEIS Associated Press December 12, 2021, 2:38 […]