‘We send our love to every member of the armed forces and the law enforcement heroes risking their lives to keep America safe, to keep America great – and as I say America First, we shouldn’t go away from that, America First,’ Trump told a crowd of about 100 in the White House Rose Garden.

This time around, most of attendees were wearing masks to prevent the spread of COVID-19. First lady Melania Trump stood next to her husband, while Ivanka Trump, Jared Kushner and their three children – Arabella, Joseph and Theodore – were in attendance.

Earlier in the morning, Trump had lashed out at Mattis for saying that the incoming Biden-Harris administration should do away with Trump’s ‘America First’ policies.

The lame duck president didn’t bring up the election – nor did he concede – but he did pardon a ‘lucky bird’ named Corn. 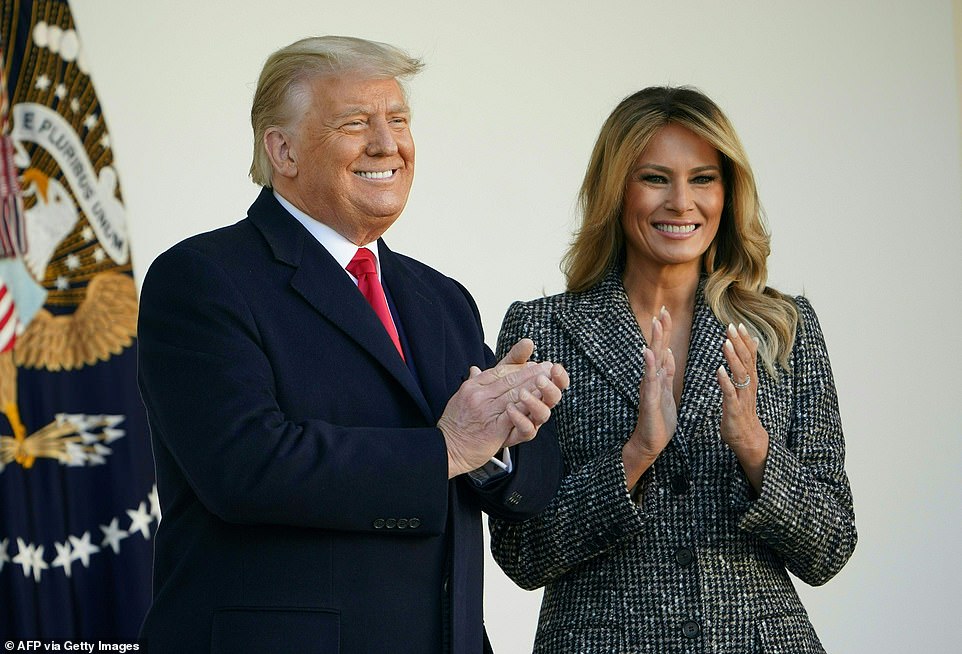 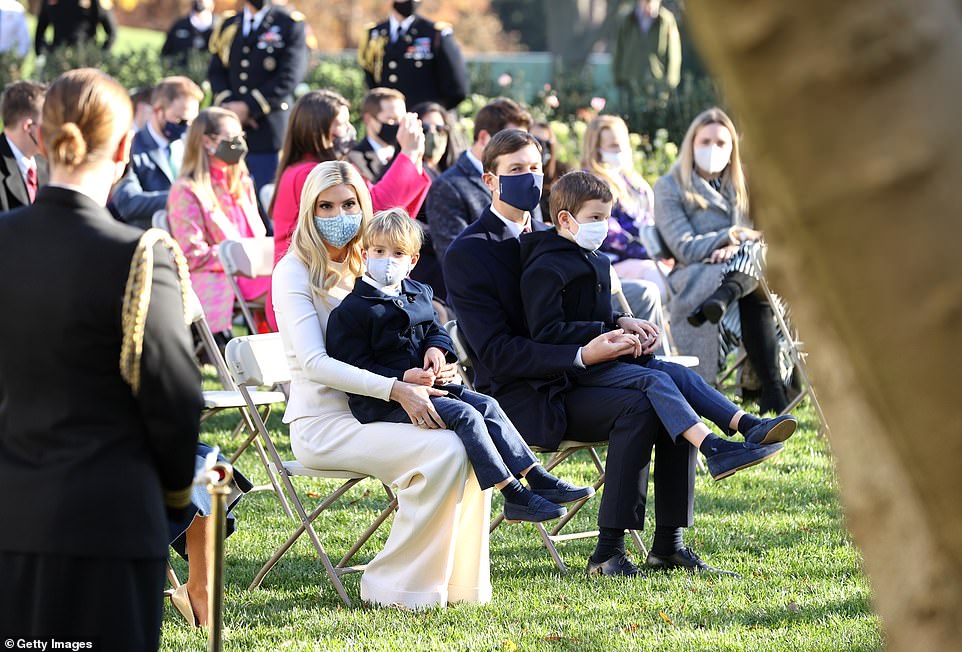 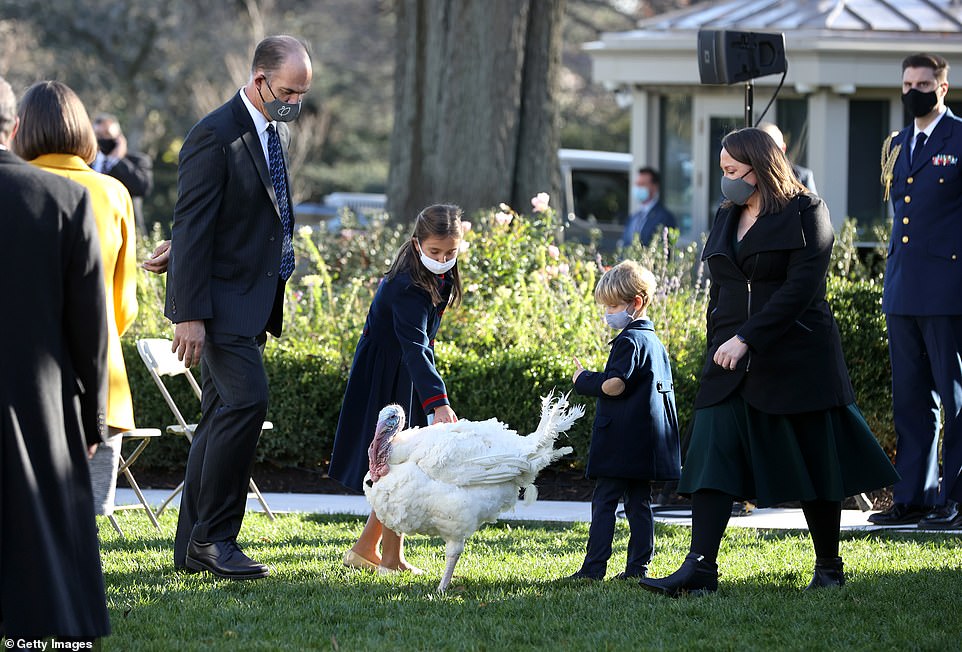 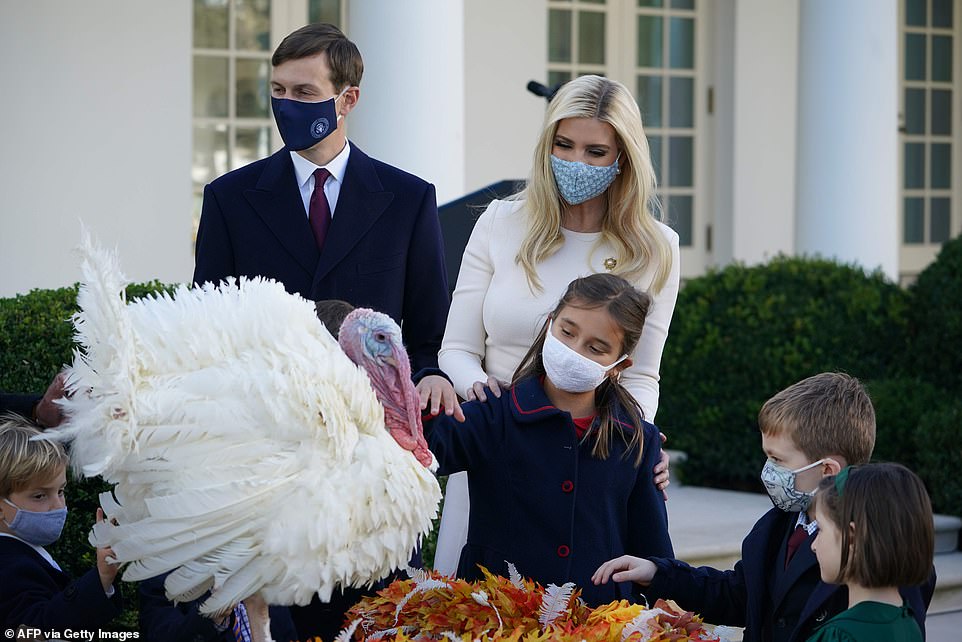 Arabella Kushner gives a pat to Corn, the final turkey that President Donald Trump pardoned in his four years in office 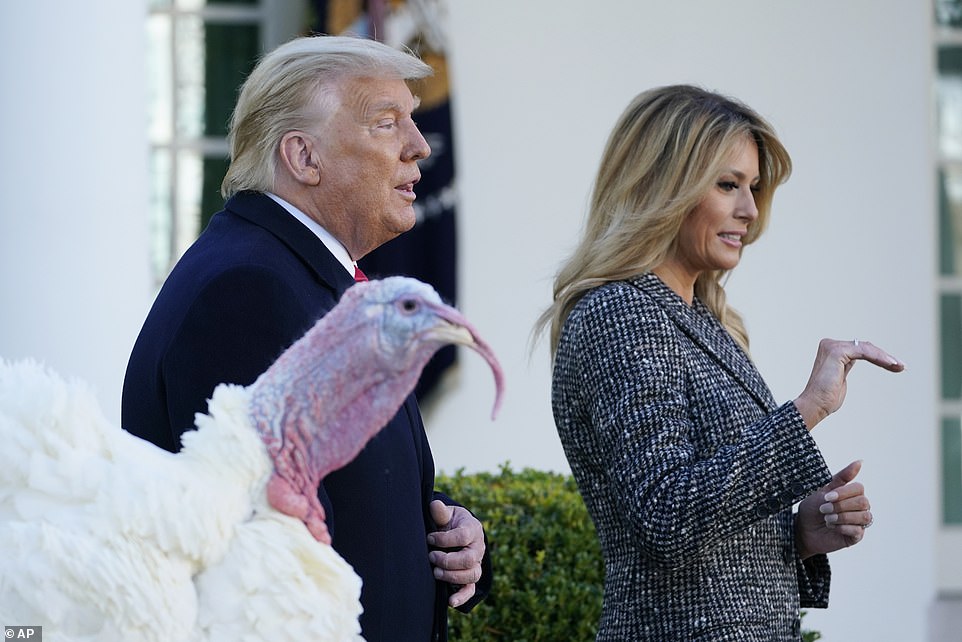 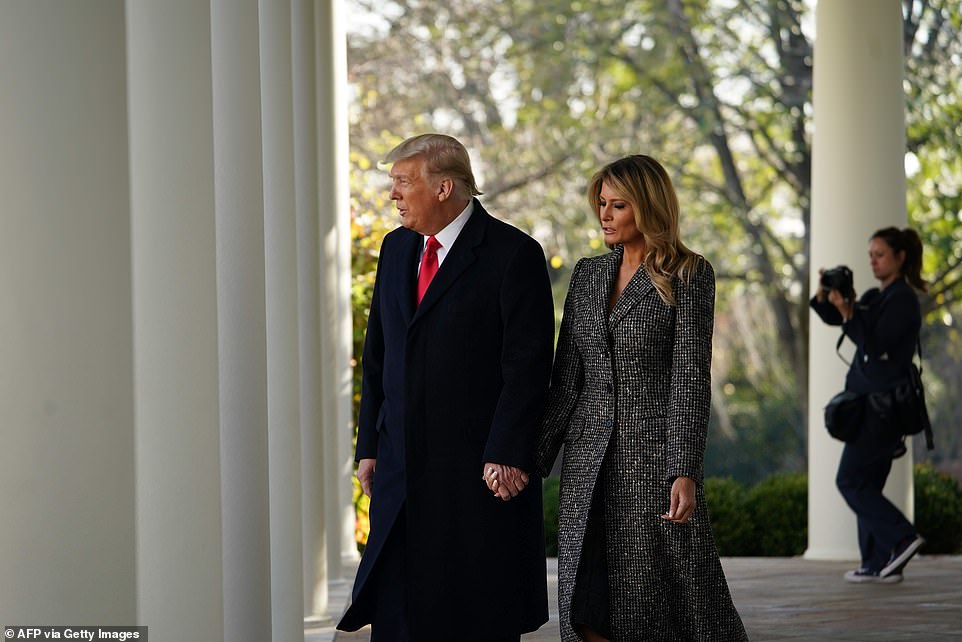 ‘Corn I hereby grant you a full pardon, thank you Corn,’ Trump said, waving his hand over the Broad-Breasted White turkey from Iowa, a state that the president said he liked because it voted for him twice.

‘I knew I liked you,’ Trump was heard saying to National Turkey Federation Chairman Ron Kardel, an Iowa farmer who raised the presidential flock of turkeys this year.

He said that it was an ‘act of blatant pandering’ that the birds named themselves after Iowa’s favorite crop.

The duo’s names were unveiled Monday at the glitzy Willard InterContinental Hotel, where the birds stay during their trip to Washington, D.C.

The president peppered his remarks with points he had made earlier Tuesday in his brief appearance at the White House podium – touting the stock market high and coronavirus vaccines that will soon be made available.

‘It’s just such a tremendous feeling,’ the president said.

He also thanked first responders and doctors and nurses.

‘Once again Melania and I wish to thank everybody for your incredible courtesies and wish you a Happy Thanksgiving,’ the president said. 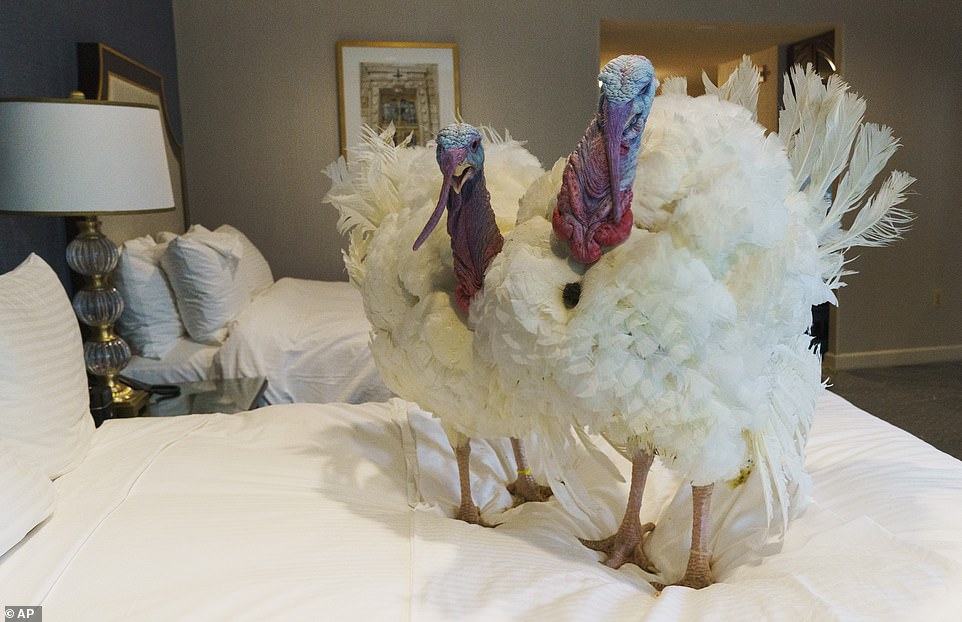 Corn (left) and Cob (right) arrived in Washington, D.C. Monday ahead of President Donald Trump’s final turkey pardon later this week. They’re staying in the glitzy Willard InterContinental Hotel prior to the pardoning 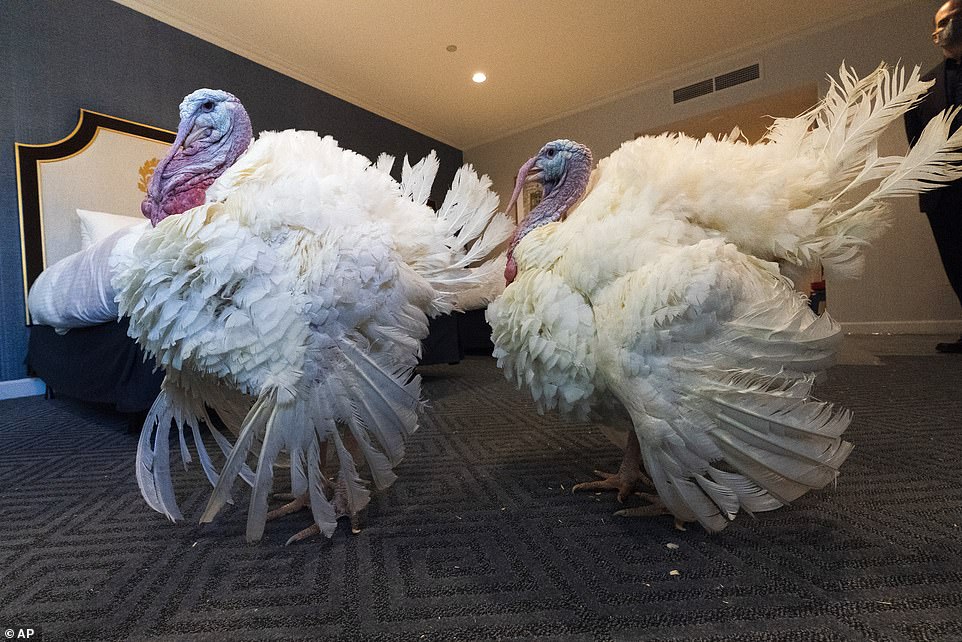 Corn and Cob take in one of the suites at the Willard InterContinental Hotel on Monday, as they arrrive from Iowa ahead of the annual White House turkey pardon 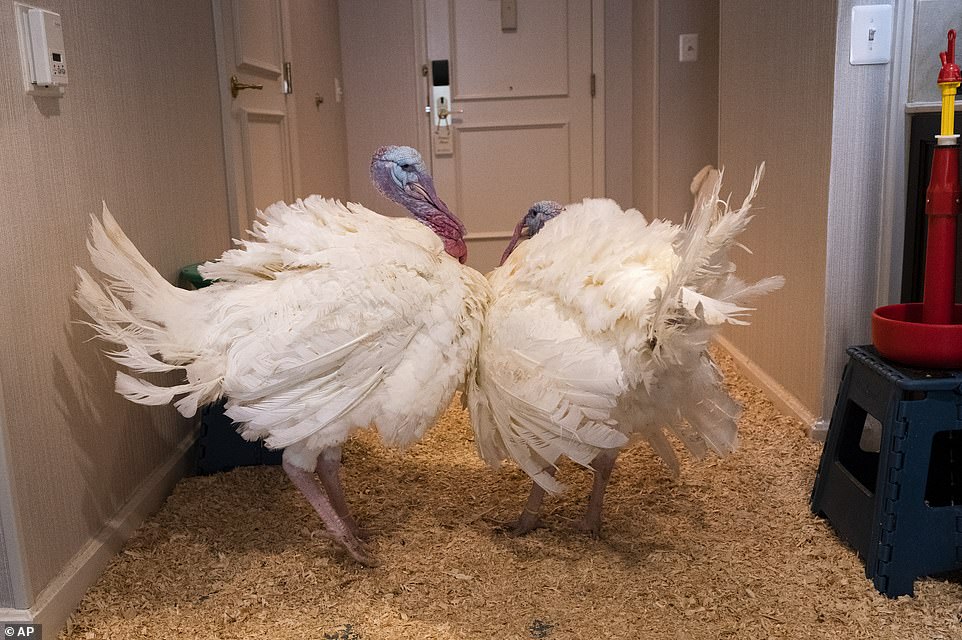 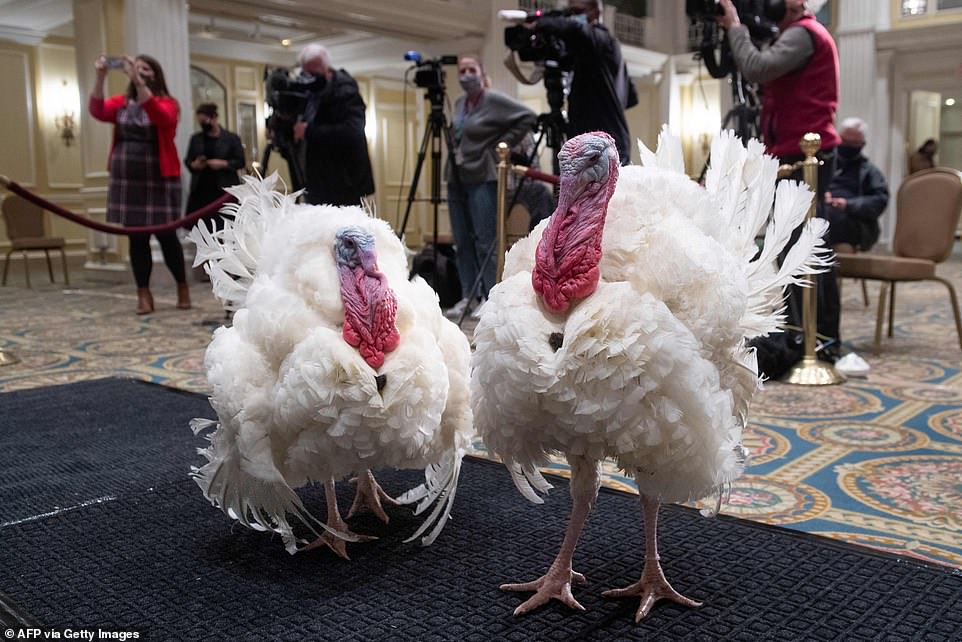 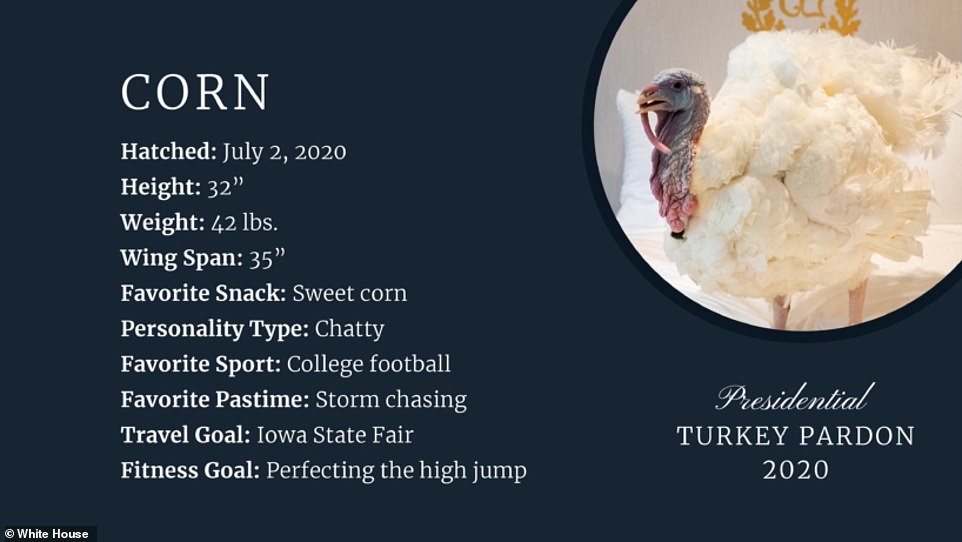 Corn is a pound fatter than Cob and is chatty, likes sweet corn, college football, high jumping and wants to take a trip to the Iowa State Fair, the White House’s website said 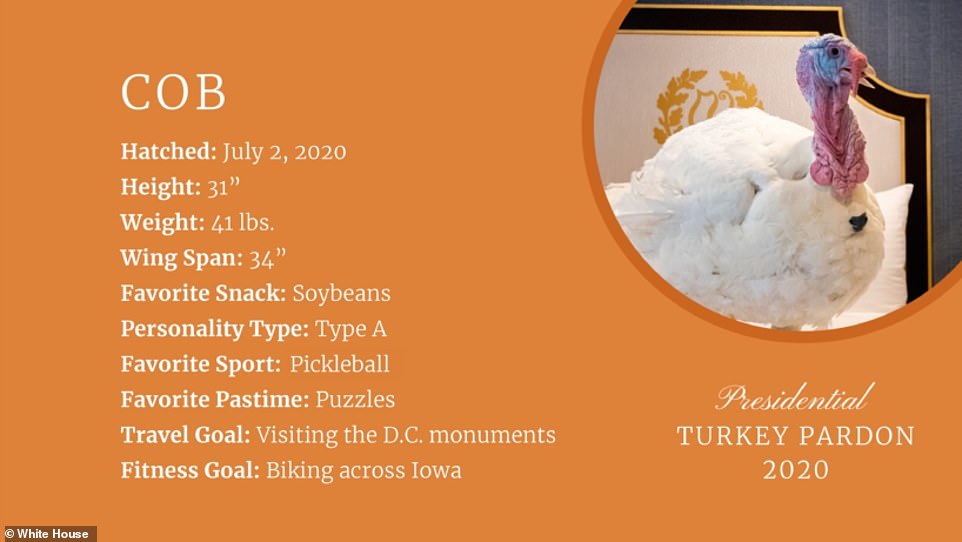 Cob wants to bike across Iowa and also visits D.C. monuments. The bird likes boybeans, pickleball, puzzles and has a ‘Type A’ personality, according to the White House 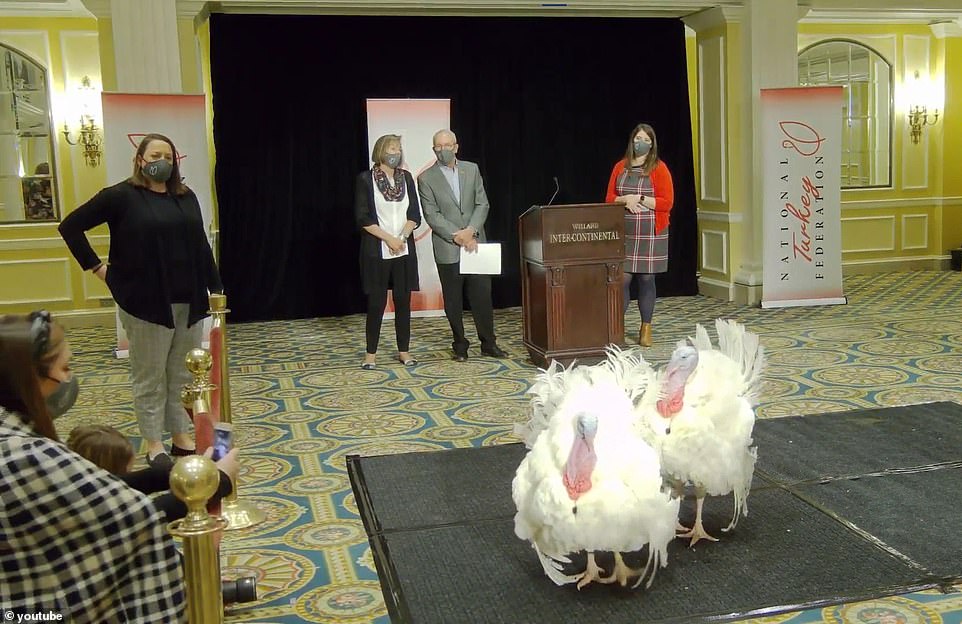 Corn and Cob got their debut Monday morning at the Willard InterContinental Hotel, which is where the birds traditionally stay 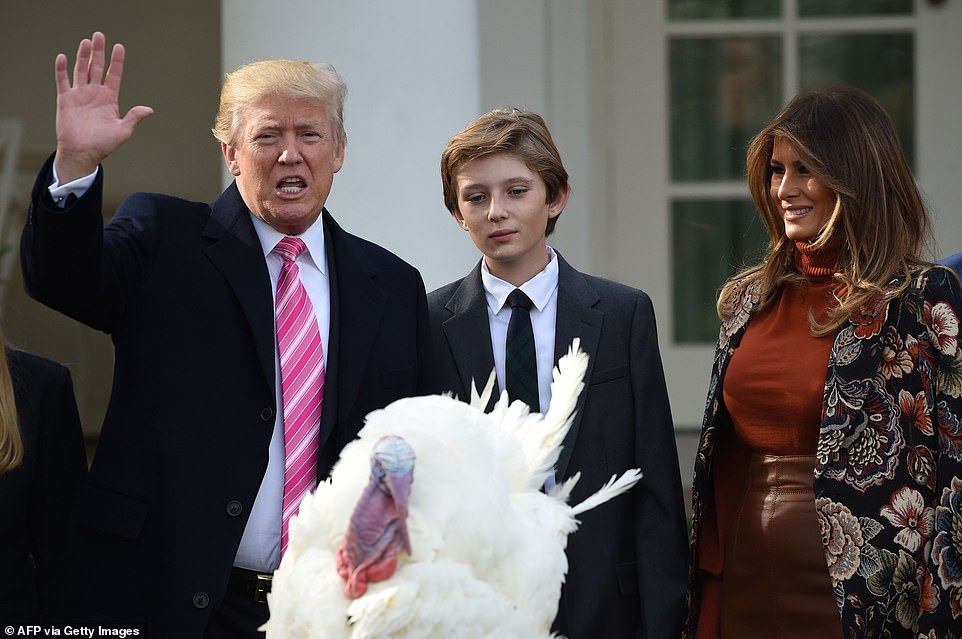 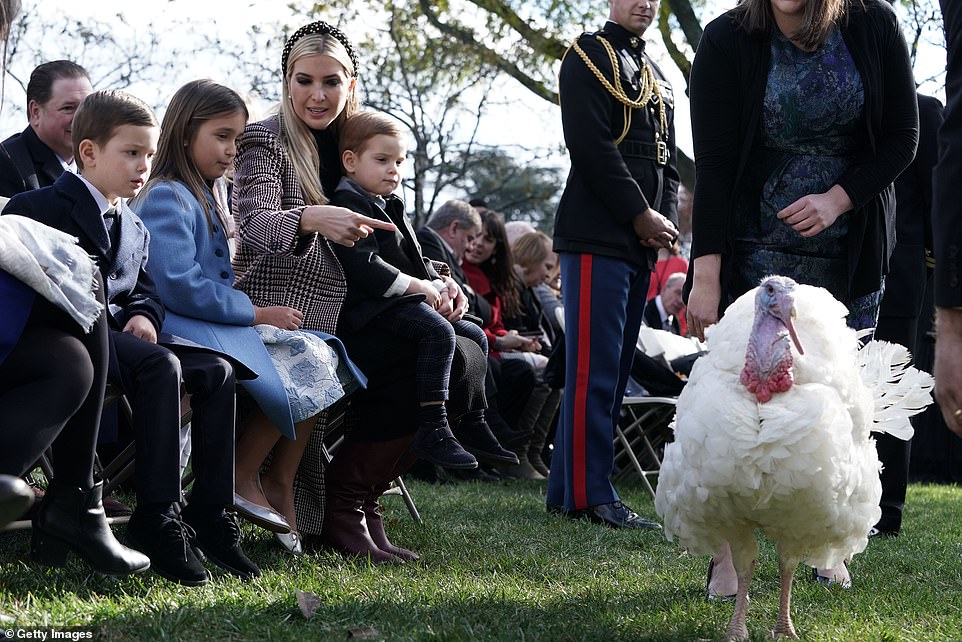 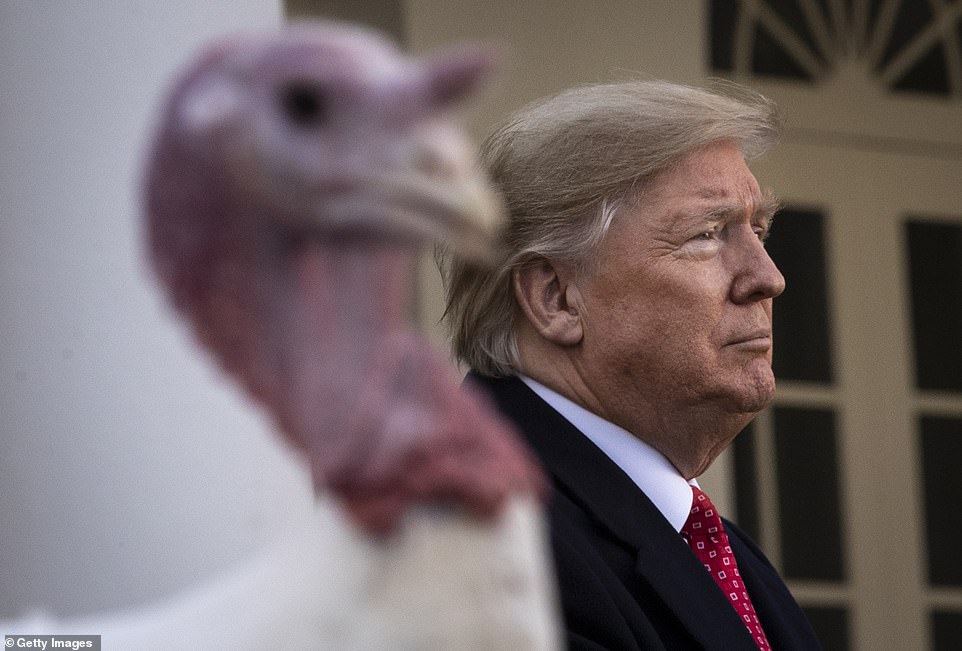 2019: Trump (right) is photographed last year with the turkey he pardoned, Butter (left). Butter is still alive and living at a Virginia Tech facility

Americans could go online and choose which turkey, Corn or Cob, would appear alongside Trump at the ceremony.

Both turkeys were born on July 2 of this year, but Corn is a shade thicker, at 42 pounds versus Cob’s 41 pounds.

Corn is more chatty, while Cob is ‘Type A.’

Corn is a college football fan, while Cob likes pickleball.

Corn wants to visit the Iowa State Fair, while Cob is more interested in the D.C. monuments, according to the White House’s website.

Both the main bird and its understudy survive the Thanksgiving table.

The National Turkey Federation told DailyMail.com that the two turkeys will reside at Iowa State University after they’re pardoned.

It’s tradition that two turkeys are sent from a farm to Washington, D.C.

The birds were raised by National Turkey Federation Chairman Ron Kardel on a farm near Walcott, Iowa.

Kardel is a sixth-generation Iowa farmer and appeared alongside the birds in Washington Monday.

The past several sets of turkeys have lived out their – generally short – lives at Gobblers Rest, a facility at Virginia Tech.

A Virginia Tech spokesperson told DailyMail.com that Trump’s turkeys from 2019 and 2018 – Bread, Butter, Peas and Carrots are still alive.

The Trumps plan to stay in Washington for Thanksgiving, the first lady’s spokeswoman Stephanie Grisham tweeted earlier this month.

While coronavirus cases are spiking across the U.S., forcing Biden to modify his Thanksgiving plans, COVID-19 has never prevented the president from traveling.

He held rally after rally in the run-up to the November 3 election.

He’s not leaving the White House because, as one aide told CNN, there’s a ‘bunker mentality’ happening, as Trump pursues legal avenues to overturn the results.

In the lead-up to the pardon, Trump spent 56 seconds addressing the press in the White House briefing room, noting how the stock market had ‘broken 30,000.’

But on Wall Street, it was also interpreted as a ‘Biden bounce,’ with the president-elect’s transition fully underway after the GSA administrator green-lit the process Monday night.

Neither Trump nor Biden answered questions from reporters.

Meanwhile, the Trump campaign sent out a tweet calling out ABC News’ Jonathan Karl for taking off his mask in the briefing room – likely to do a TV live hit – writing, ‘Cameras off = masks off?’

Also, Trump campaign lawyer Jenna mocked Biden – who had the election result in Pennsylvania certified in his favor earlier – for making cabinet announcements.

‘All this media chatter of Joe Biden picking his cabinet is like fantasy football. Meaningless in the real game,’ she wrote. 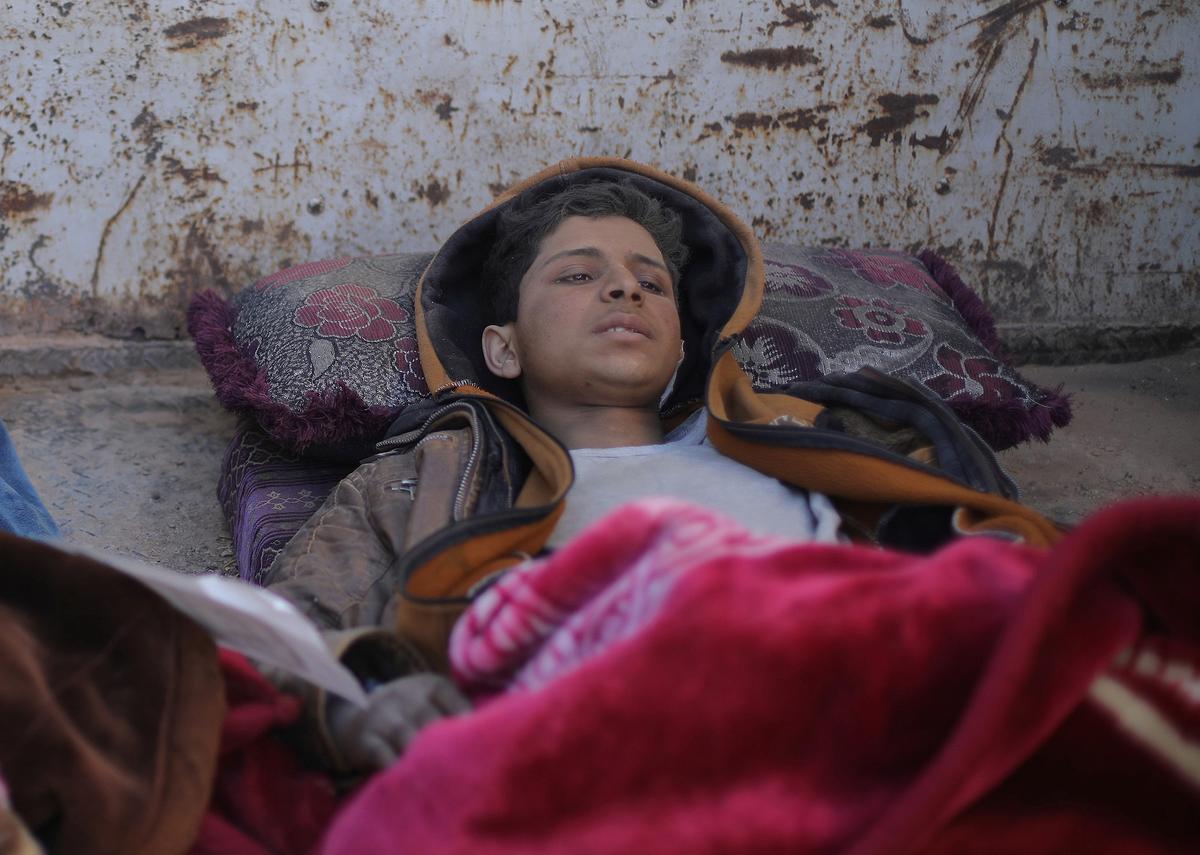 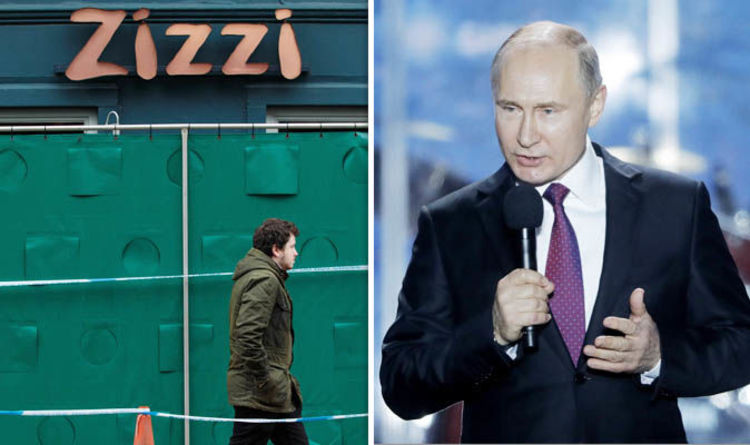 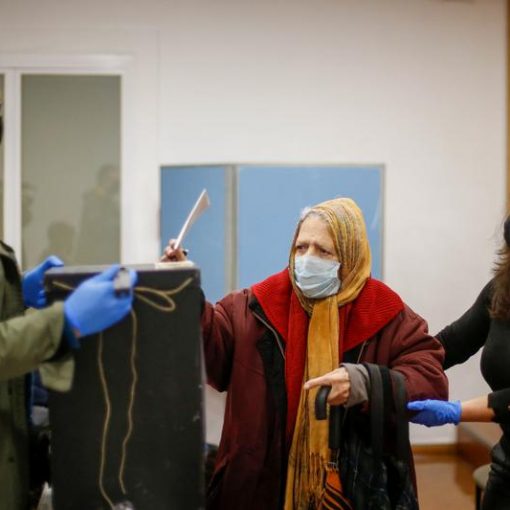 LISBON (Reuters) – Masked, socially distanced and each given their own pen to avoid spreading germs, Portugal headed to the polls on […] 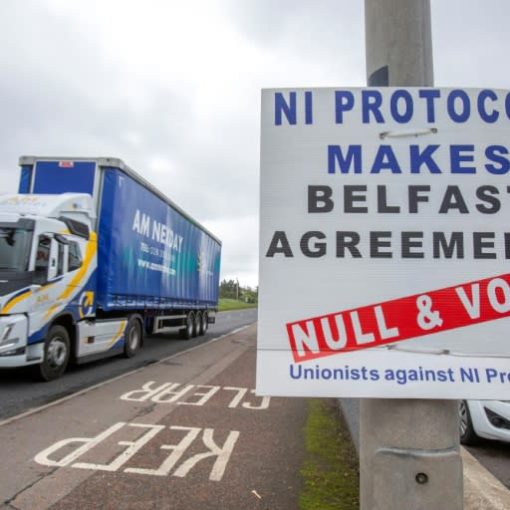 The UK government will Monday introduce legislation to unilaterally rip up post-Brexit trading rules for Northern Ireland, despite the potential for a […]