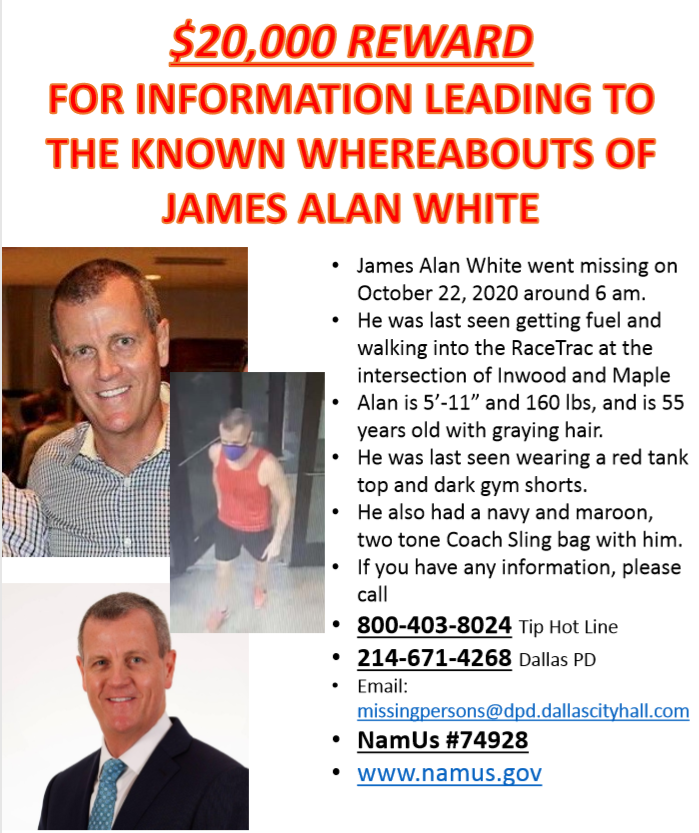 As many families gather for Thanksgiving this week, the loved ones of Dallas businessman Alan White say it won’t be the same without him as the holiday marks five weeks since he went missing.

“We should all be together right now,” Alan’s younger brother, Tim White, told Dateline. He added that today is their mother’s 82nd birthday and they had plans to visit her in Florida.

“Instead, we’re just worried sick about where Alan could be,” he said.

James Alan White, 55, has been missing since October 22, 2020. His husband, Rusty Jenkins, told the NBC affiliate KXAS-TV that they both left home around 4:40 a.m. to head to their respective gyms as part of their morning routine.

Alan drove to LA Fitness on Haskell Avenue and then, according to his family, security video shows him getting back in his car and driving in the direction of home. But he never made it.

Rusty told KXAS-TV that Alan had a work call at 7 a.m., so when he didn’t return home for it, Rusty began to panic.

Alan’s brother Tim told Dateline that Rusty drove the route between their home and the gym, thinking Alan might have been in a car accident. But there was no sign of Alan or the black Porsche Macan SUV he had been driving.

Tim explained that Alan’s car had been in the shop, so he was driving a loaner car. Within a couple of days, Tim traveled from West Virginia to Texas to join the search for his brother.

Through Alan’s bank account transactions and security video, Tim and Rusty determined he had left LA Fitness at 5:38 a.m. and paid for gas at 6:01 a.m. at the RaceTrac gas station at Inwood Road and Maple Avenue. Security camera footage shows Alan filling the tank of the car and driving out of the parking lot north toward his home.

The mystery of Alan’s whereabouts only deepened on October 29, about a week after he was last seen. According to the Dallas Police Department, Alan’s Porsche Macan SUV was found abandoned in the area of Simpson Stuart and Bonnie View roads, which is the opposite direction of Alan’s house from the gas station, Tim said. He added that the gas station was only about a mile from the house, but the car was found about 10-15 miles away.

“It’s like something happened in that mile he was driving home,” Tim said. “It’s just baffling. If it were a carjacking, they wouldn’t have the car. It just doesn’t make any sense.”

Tim told Dateline their family doesn’t know who would want to harm Alan, but they also have no reason to believe Alan would willingly disappear. The successful businessman had started a new job as a Managing Director in an advisory role at KPMG in February.

“He’s very successful in all that he does,” Tim told Dateline. “We always had a sibling rivalry, but then got very close. He set the bar for me and I’ve always looked up to him for advice with my own business.”

Tim added that their niece and her fiancé were visiting Dallas from out of town that weekend and that Alan had planned to look at wedding venues with them the next day.

On his desk is a to-do list from the day he was last seen. And Alan and Rusty had already booked plane tickets to visit Alan’s mother for her birthday this week.

Tim told Dateline that their mother is distraught and keeps asking, “Why would someone take him?”

On Friday, Dallas police upgraded the case from a “want to locate” to an “endangered missing person,” citing recent developments, but would not elaborate on details due to it being an active and ongoing investigation.

Both Tim and Rusty said they’ve replayed different scenarios over in their minds about what could have happened.

The family said they are desperate for any information that might lead them to Alan.

“No matter how small, it could be the piece that leads us to him,” Tim said. “Hopefully someone out there saw him and will call the police.”

A $20,000 reward is being offered for information that leads to Alan’s whereabouts.

“We’re trying to hold out hope,” Tim said. “But it’s been a month. Five weeks on Thanksgiving Day. So it’s really tough. We just want to know where he is.”

Alan is 5’11” tall, weighs approximately 160 pounds and has graying hair. He was last seen wearing a red tank top, dark gym shorts. He also had a navy and maroon two-toned Coach sling bag with him.

If you have any information about the whereabouts of Alan White, please call the Dallas Police Department at 214-671-4268 or email [email protected] 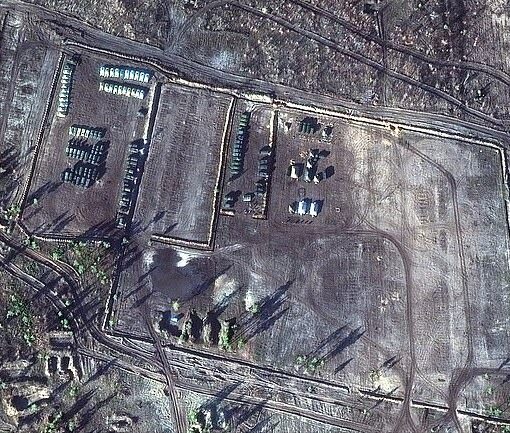 Russia has warned the escalating tensions with the US over Ukraine risked repeating the 1962 Cuban missile crisis. ‘You know, it really […] Joe Biden was being taunted on Thursday with the hashtag ‘Empty Shelves Joe’, as frustrated shoppers complained about shortages of products in […] 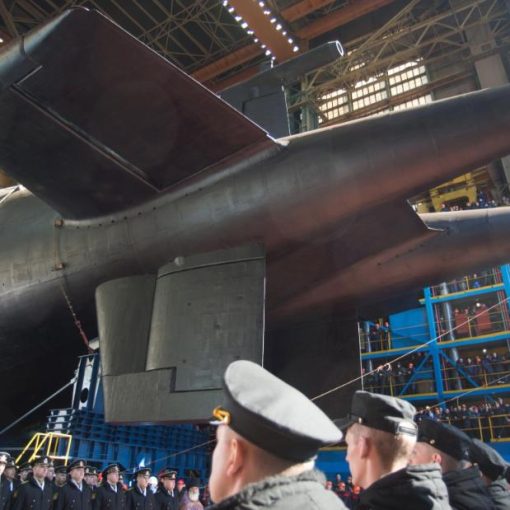 The Belgorod was turned over to the Russian Navy earlier this month in the port of Severodvinsk, according to the country’s largest […] 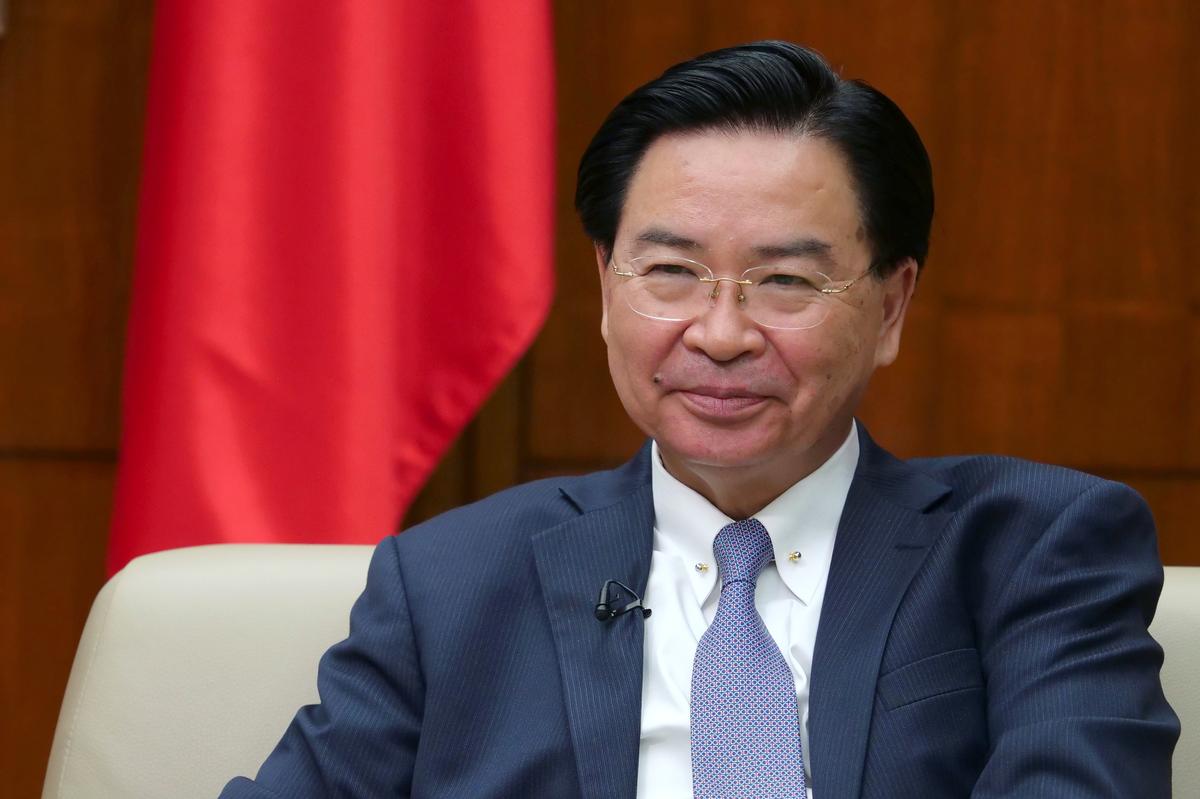