Wong, 24, was prosecuted alongside fellow activists Ivan Lam and Agnes Chow over a protest which took place last summer outside the city police headquarters.

‘We will continue to fight for freedom – and now is not the time for us to kowtow to Beijing and surrender,’ Wong told reporters before the trial began.

Hong Kong was hit by seven straight months of huge and often violent democracy rallies last year in which millions took to the streets.

Beijing and local authorities have refused demands for free elections and have pursued democracy supporters with criminal cases and a sweeping new national security law with critics say has eroded Hong Kong’s freedoms. 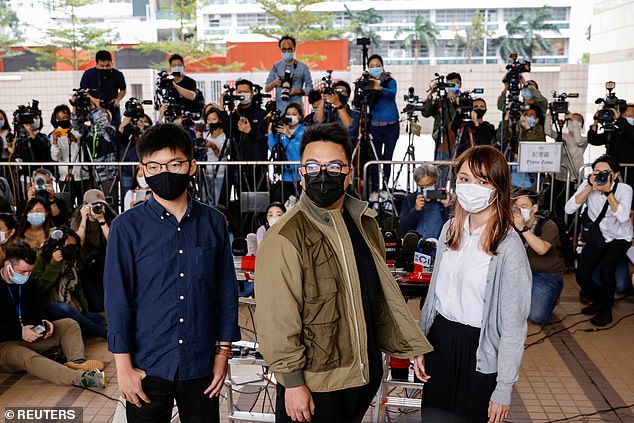 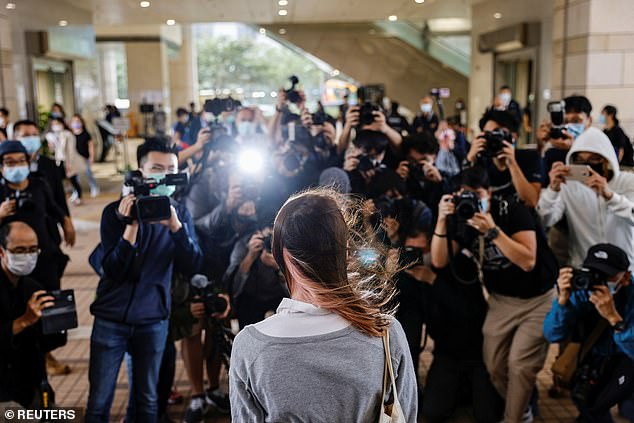 ‘We have no regrets,’ said Lam.

All three were remanded into custody pending sentencing on December 2, meaning a jail term is all but guaranteed.

The maximum sentence a magistrates court can hand down is three years.

As he was led away Wong shouted: ‘Everyone hang in there. I know it’s tougher for you to remain out there. Add oil!’

Add oil is a popular phrase of encouragement in Cantonese.

Police became a target for demonstrators after tear gas and rubber bullets were routinely used to clear crowds when rallies kicked off last June.

The force’s headquarters was besieged on multiple occasions with crowds hurling eggs and daubing its walls with graffiti.

Chow had previously said she planned to plead guilty, a tactic which can lead to a lighter sentence.

Wong and Lam had originally vowed to fight the charges. But they changed tactics just as the trial got underway. 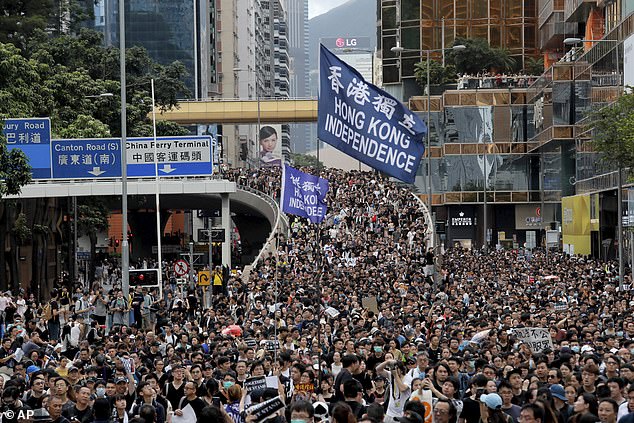 Despite his youth, Wong has already spent time in prison for leading democracy protests and has said he is prepared for a return.

‘Emotionally I am reluctant in every way to be jailed but rationally I have absolutely no space to complain in comparison with many others,’ he said outside court in a reference to the hundreds of protest-linked prosecutions already concluded.

Wong became an activist when he was in his early teens, organising successful rallies in 2012 against plans to make Hong Kong’s education system more ‘patriotic’ and similar to the mainland.

Lam and Chow joined the same movement as teenagers.

In 2014 they helped inspire and lead the ‘Umbrella Movement’ – a 79-day peaceful occupation of three busy intersections by a largely student-led campaign calling for universal suffrage.

Wong was jailed for his involvement in those protests, alongside most of that movement’s main leaders.

When last year’s much larger democracy protests kicked off, Wong was still in jail.

He vowed to continue fighting for democracy on his release and made appearances at numerous rallies throughout the year.

However the protests were deliberately leaderless, mostly organised by social media and encrypted chat forums.

They were also much more violent. Riot police unleashed thousands of rounds of tear gas and rubber bullets and were frequently filmed using batons to beat arrested demonstrators.

Small groups of hardline activists resorted to rocks, petrol bombs and even bows and arrows. 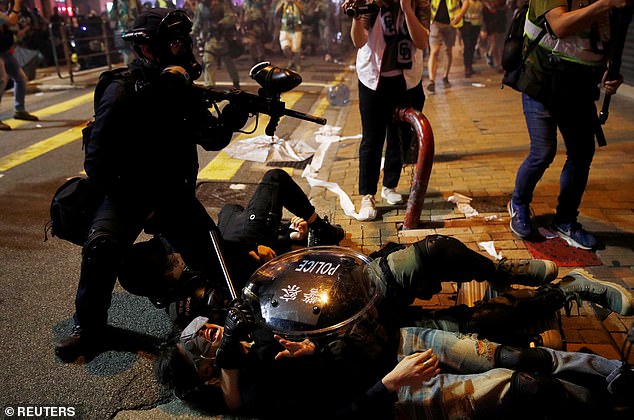 More than 10,000 people were arrested and Hong Kong’s courts are now filled with trials. Most of the city’s leading activists and opposition figures face prosecution.

The demonstrations petered out at the start of the year thanks to fatigue, mass arrests and the emergence of the coronavirus.

An anti-pandemic ban on more than four people gathering in public has remained in place for most of this year.

Beijing has also imposed a broad security law which ramps up its direct control over the semi-autonomous city and outlaws certain political views.

Wong disbanded his pro-democracy group Demosisto in June, just hours after China’s parliament passed the law punishing anything Beijing considers to be subversion, secessionism, terrorism and collusion with foreign forces.

Wong also faces charges of participating in an unauthorised assembly in June 2020 over a vigil commemorating the Tiananmen Square crackdown in Beijing in 1989.

Earlier this year, Wong was disqualified along 11 other pro-democracy politicians and activists from running in a since-postponed election for the city’s legislature.

The crackdown has drawn criticism from Western governments who say China is not fulfilling its obligation to allow Hong Kong a high degree of autonomy, agreed with former colonial master Britain when the city returned to Chinese rule in 1997.

China denies the accusation and says Hong Kong is its internal affair, with authorities saying they have returned much-needed stability to the global trade hub. Since California changed its vaccination law to get rid of the personal belief exemption, the number of medical exemptions granted by doctors […] 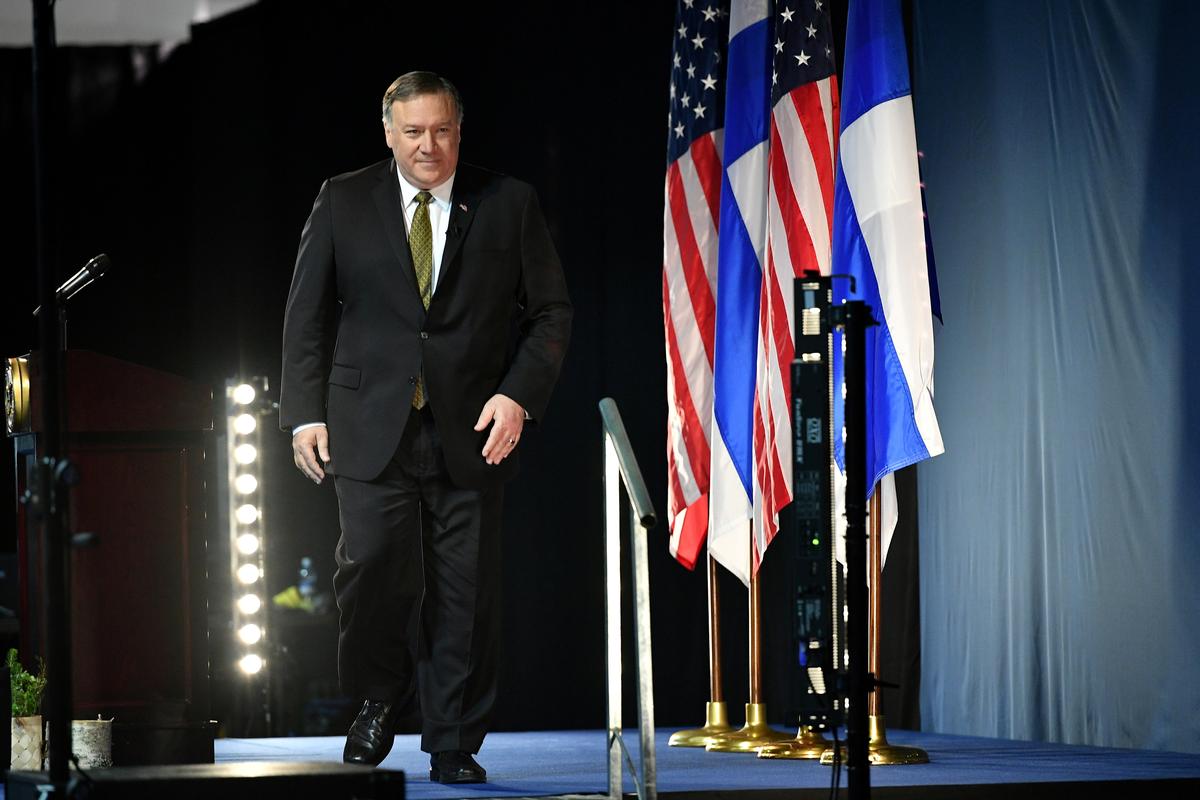 ROVANIEMI, Finland (Reuters) – U.S. Secretary of State Mike Pompeo said on Monday that Russia is behaving aggressively in the Arctic and […] 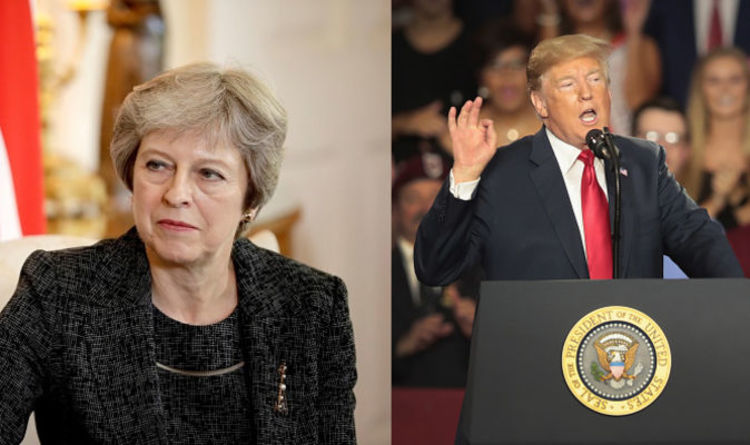 The US/Iran nuclear agreement was hailed as one of Barack Obama’s biggest successes leading to an improved relationship between the two countries. […] 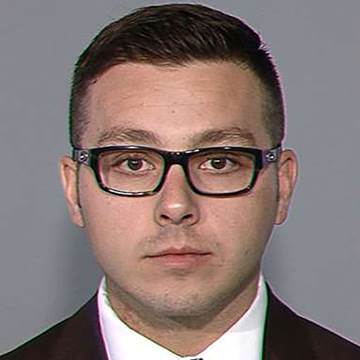