Twitter has launched a new feature that allows users to make tweets disappear after 24 hours, which will roll out to all users in the next few days.

Fleets – a portmanteau of ‘tweets’ and ‘fleeting’ – from the people users follow appear at the top of a their timeline.

They cannot be retweeted or receive public responses, but instead must be interacted with through Direct Messages.

Followers can reply to Fleets by sending a private Direct Message, but only if they follow each other or the account holder has their Direct Messages set to open.

Fleets are designed to help users feel more comfortable participating on the platform in a ‘lower pressure way’ without the need to worry about retweets and likes, the firm said.

The feature, which was successfully trialled in Brazil and other countries this year, gives users to option to tweet about something in a more private way, which may prevent them from being harassed by strangers on the platform. 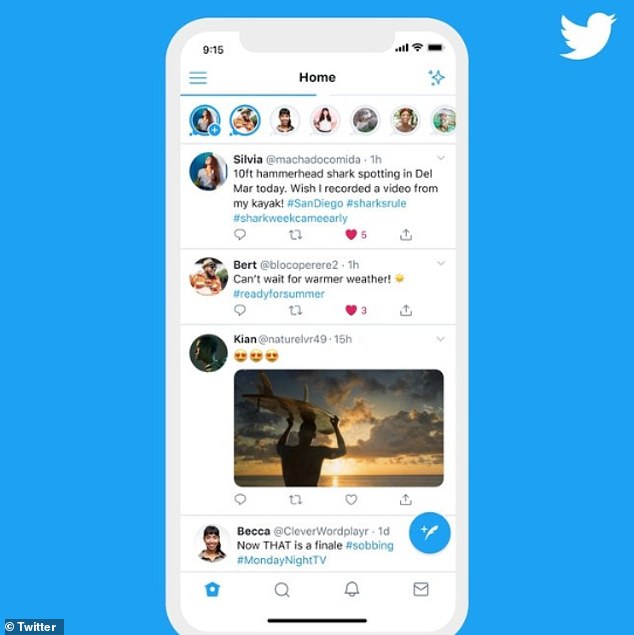 Usually, once a tweet is posted by a user they’re visible on an individual’s profile for all to see unless the user proactively decides to delete them.

Twitter is generally slow to make major changes to its user experience, making the new update a pleasant addition for users.

The social network still isn’t yielding to user demands to implement an edit button, however.

‘We’ve learned that some people feel more comfortable joining conversations on Twitter with this ephemeral format, so what they’re saying lives just for a moment in time,’ said Twitter’s Joshua Harris, director of design, and Sam Haveson, product manager, in a blog post. 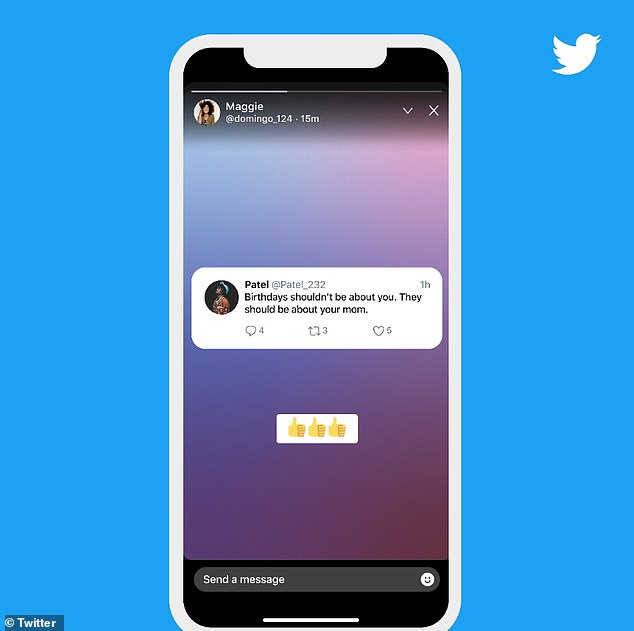 The new feature, which rolls out in the next few days, is incredibly reminiscent of Instagram Stories

‘Some of you tell us that Tweeting is uncomfortable because it feels so public, so permanent, and like there’s so much pressure to rack up retweets and likes.

‘To help people feel more comfortable, we’ve been working on a lower pressure way for people to talk about what’s happening.

‘In the coming days, everyone globally will have Fleets on Twitter for iOS and Android.’

Any Twitter user who can see another user’s full profile can see their Fleets there too.

Anyone who wants to reply to a Fleet can tap on it to send a Direct Message or emoji to the author. They can then continue the conversation in Direct Messages. 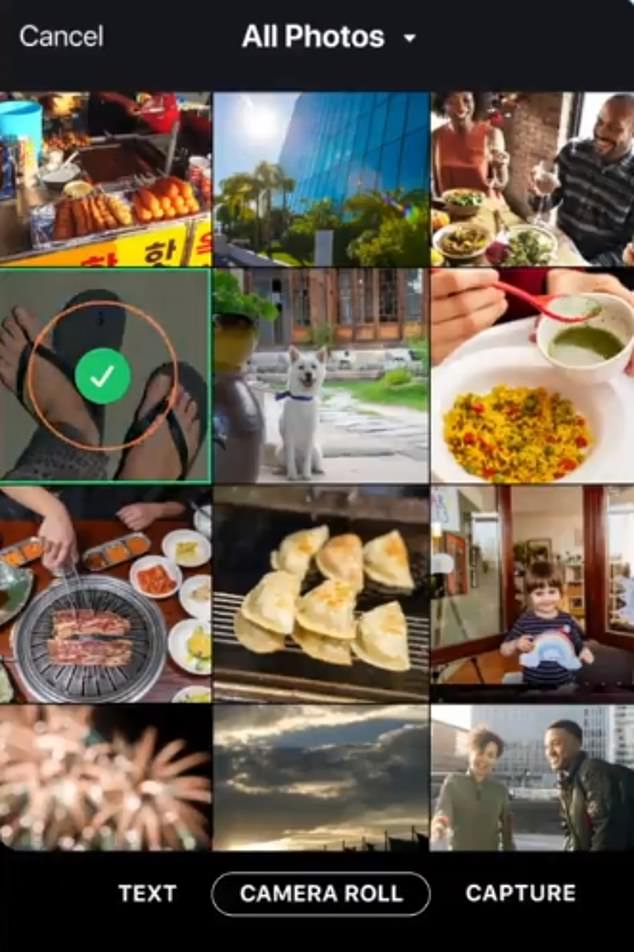 Plans are already in motion to add stickers and live broadcasting to Fleets, which will be updated over time with other new features, Twitter said.

The tech giant first announced it was testing such a feature in March, with a trial in Brazil, later expanding to Italy, India, and South Korea. 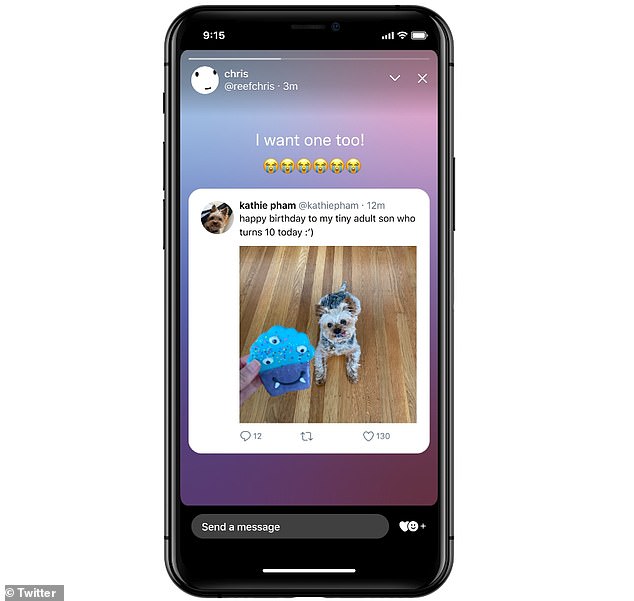 It found from the trials that Fleets helped people feel more comfortable sharing personal and casual thoughts, opinions, and feelings.

Twitter executives admitted the format ‘may sound familiar’, referring to Snapchat who spearheaded the art of disappearing messages and Instagram which followed suit in 2016 with Stories.

Earlier this month, Facebook-owned WhatsApp also confirmed ‘disappearing messages’ that vanish from chats after seven days will roll out globally on iOS and Android in November.

The platform said the update was designed to give users the option to make conversations ‘feel lighter and more private’.

Instagram has been owned by Facebook since 2012, which is known for its attempts to copy Snapchat’s features – and its rejected offer to buy Snapchat in 2013.

WHATSAPP JUMPS ON THE BANDWAGON WITH ‘DISAPPEARING MESSAGES’ 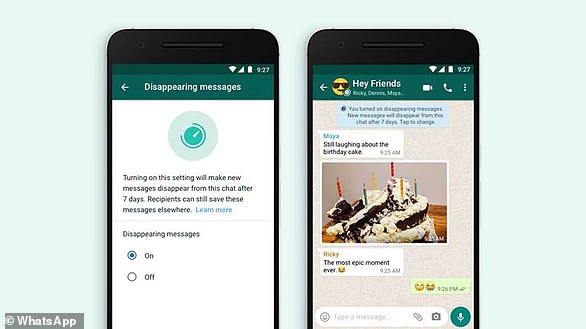 Messages that vanish from a chat a week after being sent are being rolled out by WhatsApp globally in November 2020 for Android and iOS users.

The Facebook-owned service said the update was designed to give users the option to make conversations ‘feel lighter and more private’.

The long-rumoured feature is similar to one used by Snapchat, a platform Facebook has taken inspiration from in the past for new features including Instagram Stories.

WhatsApp said its goal with disappearing messages is to make conversations ‘feel as close to in-person as possible’ so ‘they shouldn’t have to stick around forever’.

The company confirmed that either user can activate the feature for themselves, while in group conversations the admin user will have control.

‘We’re starting with seven days because we think it offers peace of mind that conversations aren’t permanent,’ a WhatsApp spokesperson said.

This can be done ‘while remaining practical so you don’t forget what you were chatting about,’ they added.

‘The shopping list or store address you received a few days ago will be there while you need it, and then disappear after you don’t.’

However, previews of messages – even ones that have been deleted in the app – may still be displayed in a user’s notifications until WhatsApp is opened.

The firm added that quoted text used for replies will remain visible even after the original message has disappeared.

There is also nothing in place to stop the other user from screenshotting a message, and unlike Snapchat, WhatsApp won’t warn you if they do take a screenshot.

‘Only use disappearing messages with trusted individuals,’ the company wrote on a blog post, adding that someone could also photograph the message with another device or copy and paste the text before it disappears.’ 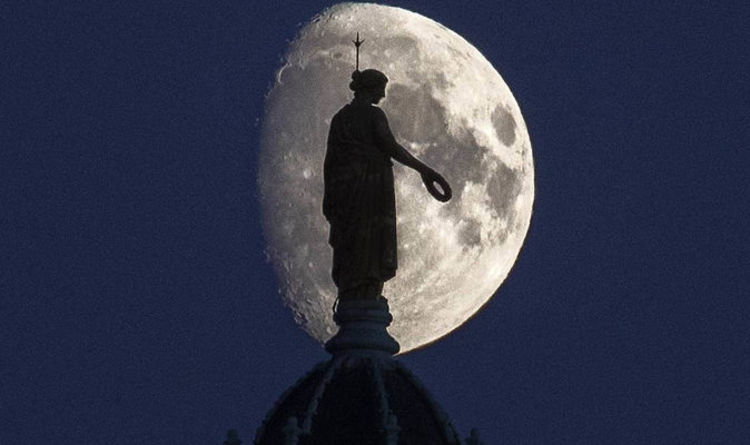 The UK is basking under the glow of a Full Moon today, the first to show its face in November. A Full […]

Last year, astronomers announced they’d found 12 new moons orbiting Jupiter, and now five of them have been named after daughters and granddaughters […] 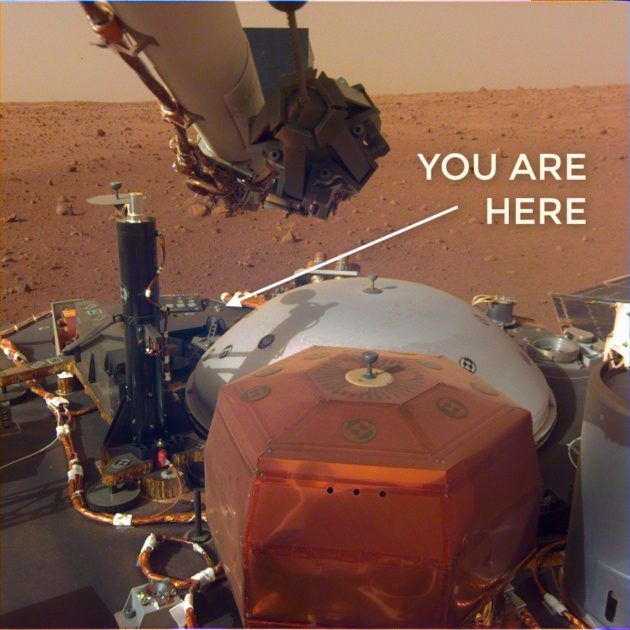 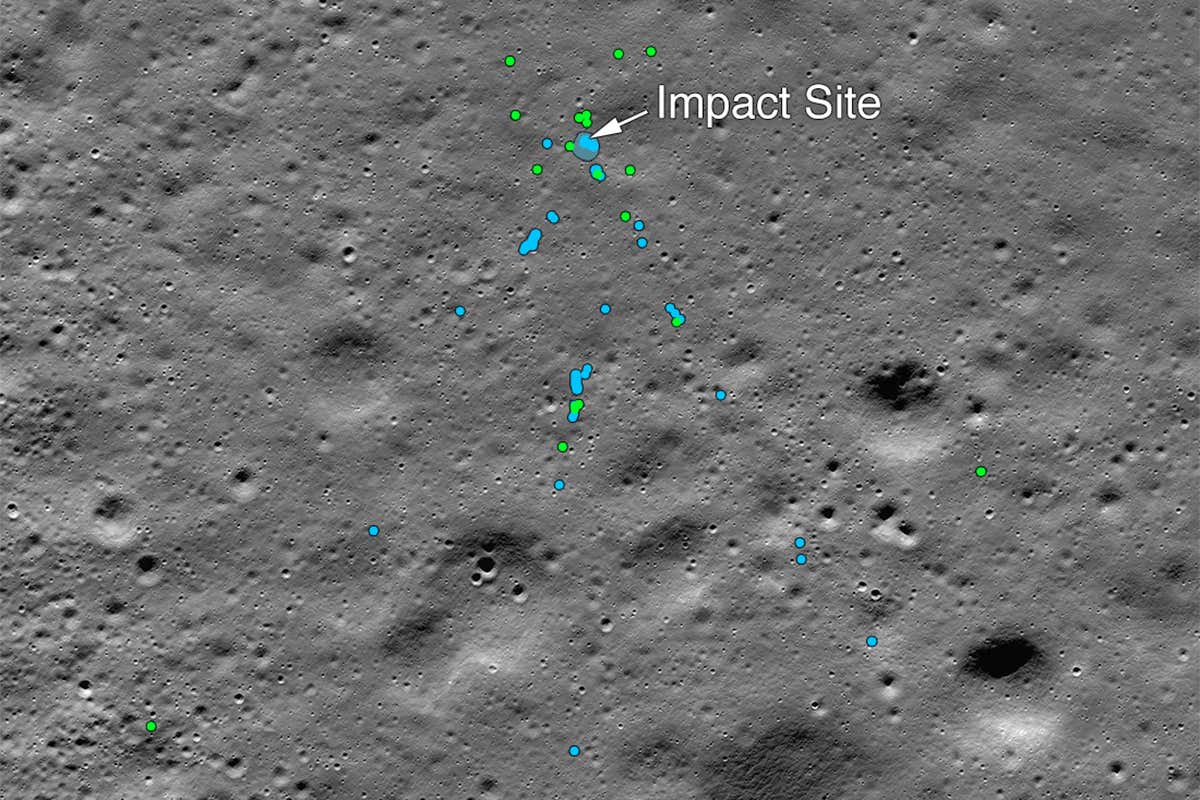