The true scale of the coronavirus outbreak is vastly underestimated and more than five million Britons have already been infected, a mathematical study claims.

Researchers focused on nations with comparable medical care and populations that have similar age distributions and found, on average, the true number of people to have been infected was 6.2 times higher than the reported figure.

However, there was a huge amount of variation depending on country, with the UK among the worst for under-recording cases.

Only six per cent of true cases were detected, with the true number 16.4 times larger than the official figure.

But according to the study data, the true level of infection by the start of September was a staggering 5.48million Britons, approximately one twelfth of the population.

A political inability to establish a suitable testing network during the first wave and restrictions on who was eligible for a test meant millions of people were infected with Covid-19 but did not receive a formal diagnosis. 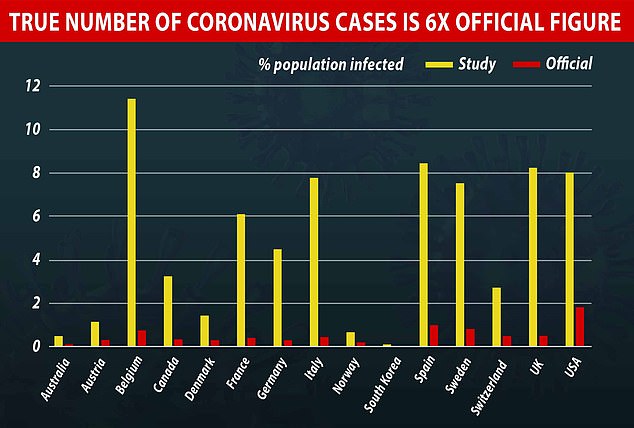 Researchers focused on nations with comparable medical care and populations that have similar age distributions and found, on average, the true number of people to have been infected was 6.2 times higher than the reported figure, but it varies by nation (pictured) 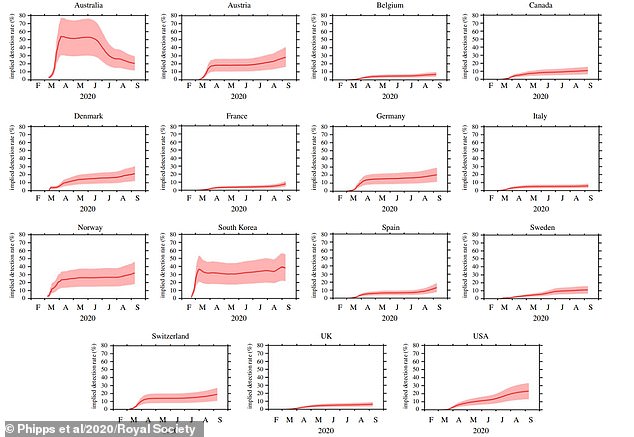 Each graph shows the detection rate of coronavirus cases for each of the 15 countries. The average is 16%, South Korea is the best at 39%, and the UK is just 6.1%, second worst, with only Italy lower at 5.7%

The population of all 15 countries is 817million people and the study claims between March 28 and August 31 the amount of infected people rose from 16.8million to 49.7million, an jump from two to six per cent of the population.

Of the 15 analysed countries, only Italy was worse than the UK, detecting just 5.7 per cent of cases, meaning the true figure is 17.5 times higher than recorded.

The best nation, of those studied, was South Korea, which recorded 39.1 per cent of its true cases.

Part of that is attributed to South Korea’s comprehensive testing approach at the dawn of the pandemic, and also its dedication to contact tracing.

South Korea has more than 600 screening centres and set up contact tracing from the beginning of its epidemic.

But other countries, including England, were slow to start, not launching contact tracing until May, around two months after the lockdown.

And last week the bungling system reported reaching just 60 per cent of contacts of positive cases.

That is the same proportion it has reached each week for the last month, and far short of an 80 per cent target. 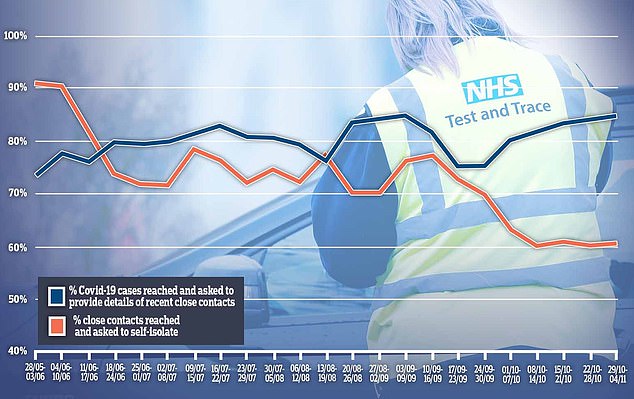 Tracers reached 85 per cent of the 141,800 people who tested positive for Covid-19 in the week ending November 4. This is the best performance yet — but still means 20,000 infected patients, and all of their contacts, slipped through the net

The coronavirus lockdown saw many city dwellers flee their concrete metropolises for the countryside, whether to go and stay in holiday homes, visit family, or for ‘staycations’ in smaller towns and villages.

This mass exodus left major cities like London and New York eerily deserted, while simultaneously infuriating the locals in more rural parts of the country, who felt like they were being invaded.

Inevitably, the movement of people from towns and cities to the countryside can lead to localised surges in infection rates in these areas.

However, a new mathematical study shows this type of migration may actually help to limit the overall spread of the disease during a pandemic.

The theoretical study found that is 90 per cent of people in one location (cities) migrate and split between here and another location filled with the other ten per cent of people (rural towns), then the number of infected people drops from 32 per cent to 23 per cent.

‘In many countries, an initially inadequate number of both testing kits and testing facilities, coupled with restrictions on who could be tested, meant that the number of confirmed cases as a proportion of the total population underestimated the true (population) infection rate,’ the Australian researchers write in their paper.

The researchers balanced out any differences between the nations and set about determining case numbers from recorded fatalities.

Data from previous studies was gathered to allow researchers to create a best estimate on time from infection to death and infection fatality rate,

Fatality rate changes based on a patient’s age and any comorbidities, but by reviewing 26 studies the researchers settled on a percentage of 0.76 per cent.

They also state, based again on previous studies, that it takes an average of 5.2 days before the virus causes symptoms, and say the time from symptom onset to death is between 12.8 and 19.2 days.

A computer system crunched the numbers and revealed the most likely estimate of true infection rate as of August 31.

‘The implied true detection rates have generally improved as the pandemic as progressed,’ the study authors write in their paper, published today in the journal Royal Society Open Science.

‘Nonetheless, as at 31 August 2020, we find that the implied true detection rates are particularly low for Belgium, France, Italy and the UK.

‘By contrast, the implied true detection rates are high in countries that have low incidences of COVID-19 and/or have employed widespread testing, particularly South Korea.

‘Australia is the only country to have experienced a decline in the detection rate.’ 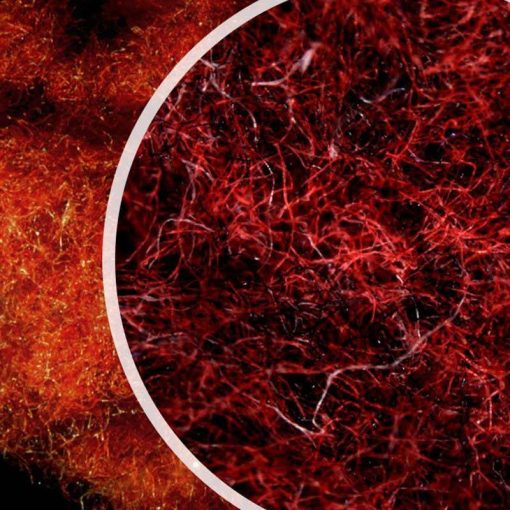 Tumble-drying clothes produces microfibre pollution, but this is almost halved by using a tumble dryer sheet and an anti-wrinkle fabric conditioner Environment […] 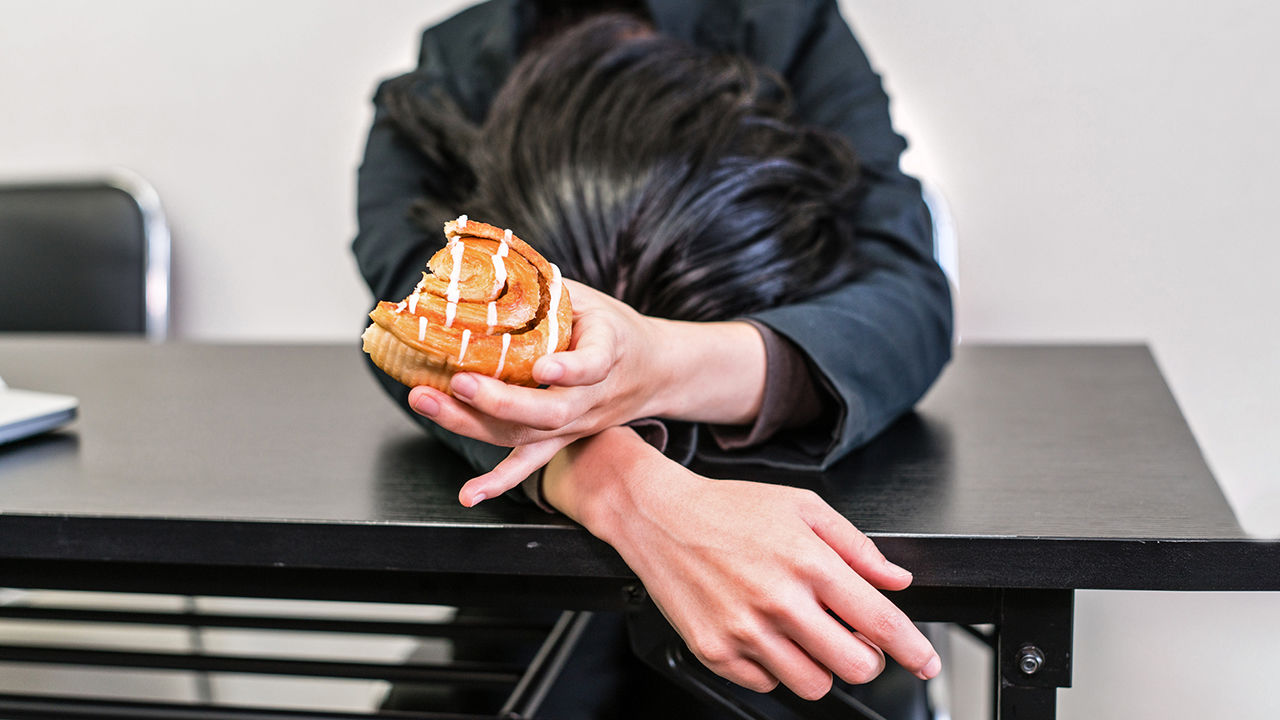 A handout picture released by Iran’s Defence Ministry on July 27, 2017 shows a Simorgh (Phoenix) satellite rocket at its launch site […] 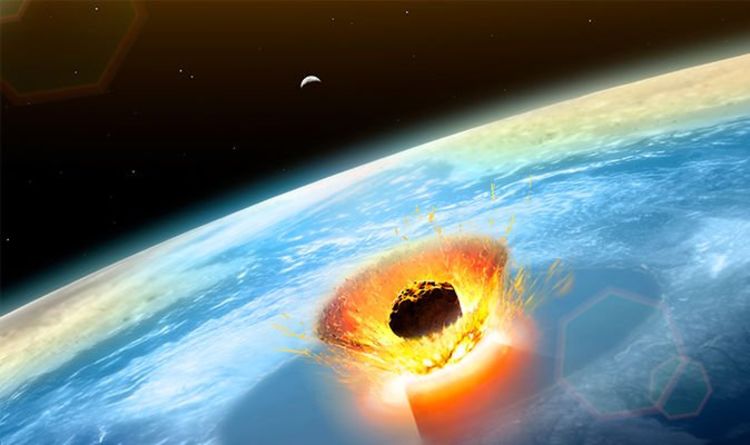 The team of excavators have found new evidence of the cosmic airburst. The space rock stripped soils from fertile fields and plagued […]