A crane began spinning dangerously out of control atop a Midtown Manhattan skyscraper on Thursday night, striking the building and causing debris to rain down on the streets below.

Footage recorded by bystanders showed large pieces of debris falling down from the building, having been knocked loose by the crane.

Sparks were seen flying as the debris struck the rigging beneath the crane before plummeting to the street below.

Photographs captured by DailyMail.com show several pieces of metal debris, approximately eight foot in length, laying on the sidewalk and in the middle of the street. At least one car was struck and sustained damage.

The New York Fire Department reported just after 11:40pm that the crane had been secured.

There were no injuries sustained in incident, but Assistant Chief John Hodgens said, ‘there is still some debris precariously hanging on the building and we are working … to secure it.’ 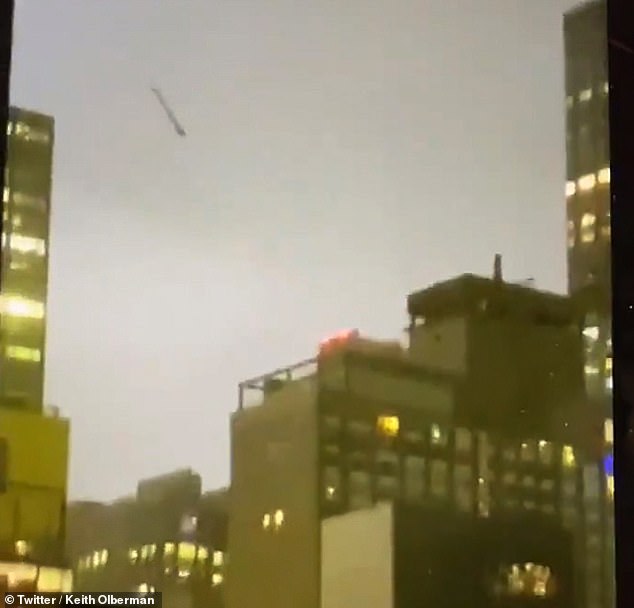 There were no immediate reports of injuries, but footage recorded by bystanders showed large pieces of debris falling down from the building, having been knocked loose by the crane 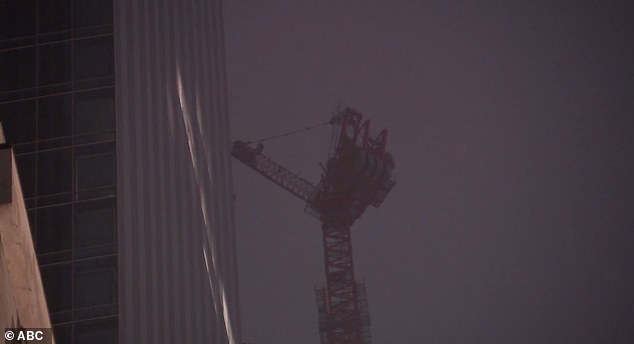 Witnesses suggested the crane was rotating out of control because of strong winds in the region caused by remnants of Hurricane Zeta, which is currently lashing the Gulf Coast

Around 30 FDNY units with a total of 110 members reported to the scene.

‘At 6:42pm our unit received a call for debris falling from a building on 57th Street. Upon arrival they noticed some debris in the street, and noticed debris continued to fall,’ Hodgens said.

‘Rescue Company 1 got up to the upper floors of the building and realized that there was a tower crane with a cable hanging from the boom that was lower than it should have been, and it was spinning around and hitting the building.

‘We were able to get the crane operator up into the crane, to secure that cable that was loose,’ Hodgens said.

The assistant fire chief added that clearing the remaining debris safely will be a ‘prolonged operation’.

Witnesses suggested the crane was rotating out of control because of strong winds in the region caused by remnants of Hurricane Zeta, which is currently lashing the Gulf Coast.

US Crane and Rigging, a company that installs the construction equipment in New York City, told NBC4 that the crane was the ‘tallest freestanding crane in NYC’s history, at 220 feet.’

Bystander Michael Illescash recalled to NY Daily News the chaotic scenes on the ground as crane began spinning out of control.

‘Everybody was running, and when I looked up, the crane was spinning. It was spinning in circles and it was ripping off pieces of the building,’ the 29-year-old said.

‘Its hook was ripping off pieces of the building. All the pieces, big metal pieces, were coming down.’

He added, ‘It was hitting metal with sparks and everything. Every time it hit the metal, we had to run inside.’ 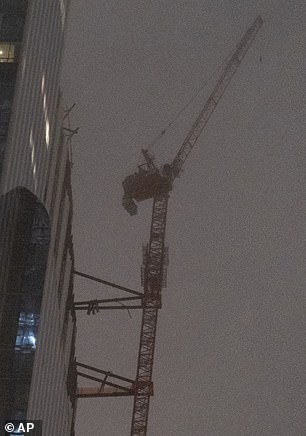 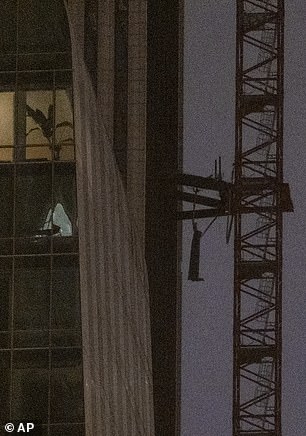 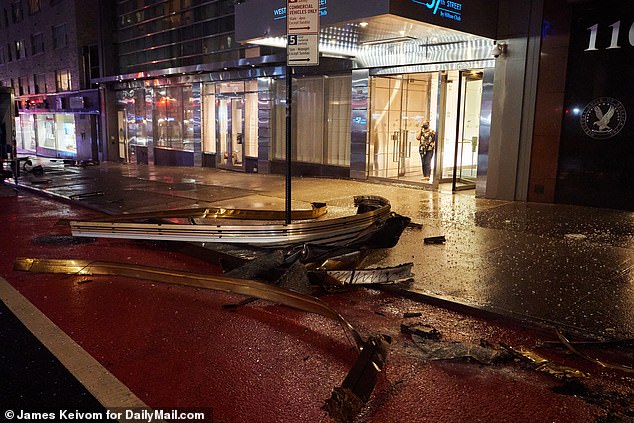 Several pieces of debris laying in the middle of the street. A cluster of metal debris 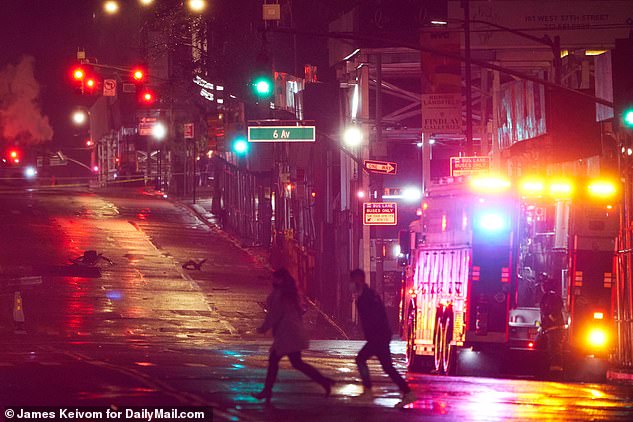 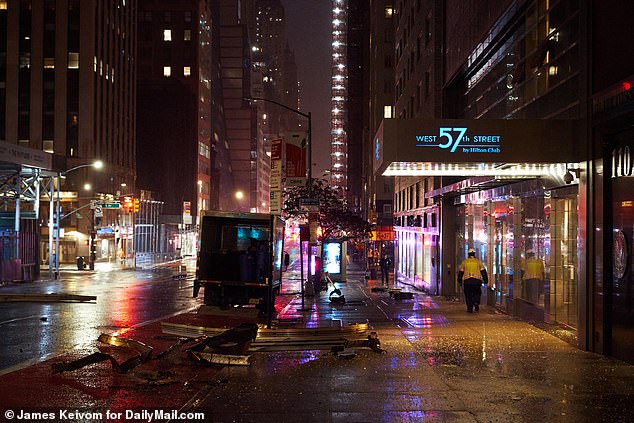 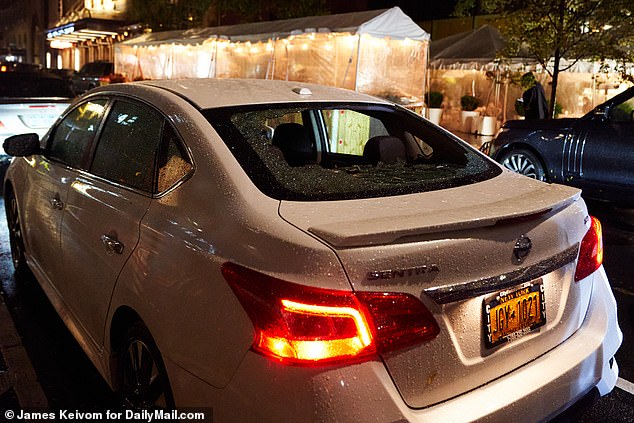 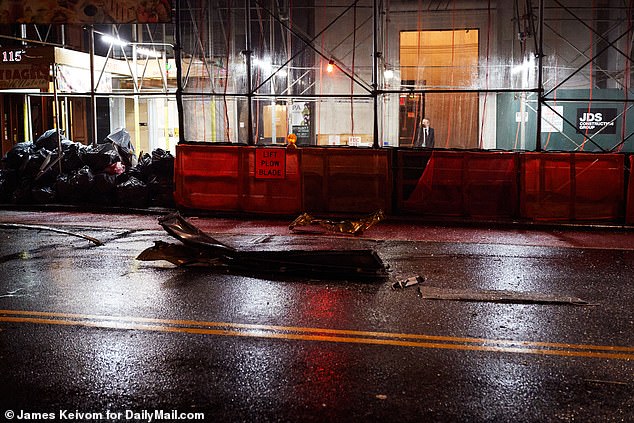 Another pile of debris is seen laying in the road in a photograph taken by DailyMail.com

The building, called The Steinway Tower, is currently under construction along the Big Apple’s ‘Billionaire’s row’ stretch of high-rises. Apartments in the building go for more than $30 million.

Authorities blocked off the area between 55th and 59th streets and Madison and Eighth Avenues while they worked at the scene.

Officials told the public to avoid the area and expected traffic delays and further road closures. Others in the vicinity were instructed to stay inside.

The city Buildings Department has sent inspectors to the scene to investigate.

The incident comes exactly eight years to the day after a different crane on a high-rise along the same block collapsed during Hurricane Sandy.

During that 2012 incident, the crane was near the top of 157 57th Street, another tower along Billionaires’ row’.

The crane was left precariously dangling over the street until the severe superstorm passed, and workers were able to secure it.

McConnell chokes up in emotional tribute to retiring Tennessee senator

December 2, 2020
Screenshot: EpicAfter a battle with Galactus that briefly shut down both Fortnite and Twitch, we have some information about what’s coming in Chapter 2,...