People are now just as likely to catch coronavirus in England as they are if they went abroad on holiday, official data suggests.

Before today, people were more likely to test positive for the infection if they had travelled overseas in the past 30 days.

But the Office for National Statistics (ONS) revealed today there is ‘no longer a difference’ in infection rates between those swabbed after returning from abroad and those who did not leave the UK.

The ONS data was based on thousands of people who took Covid-19 swabs between September 25 and October 8 in England. There is no comparable data for Scotland, Wales or Northern Ireland.

Holiday makers involved in the study had returned from countries across the Europe, including Spain, Greece and Italy, which have all seen a spike in coronavirus cases over the past month, as well as further afield from Hong Kong and South Africa.

It comes after Downing Street said it was investigating whether it would be possible to slash the travel quarantine time by half to seven days in order to boost compliance and encourage people to book holidays.

A spokesman stressed no decision has been taken, while Nicola Sturgeon has confirmed Scotland will not be reducing its 14-day quarantine. 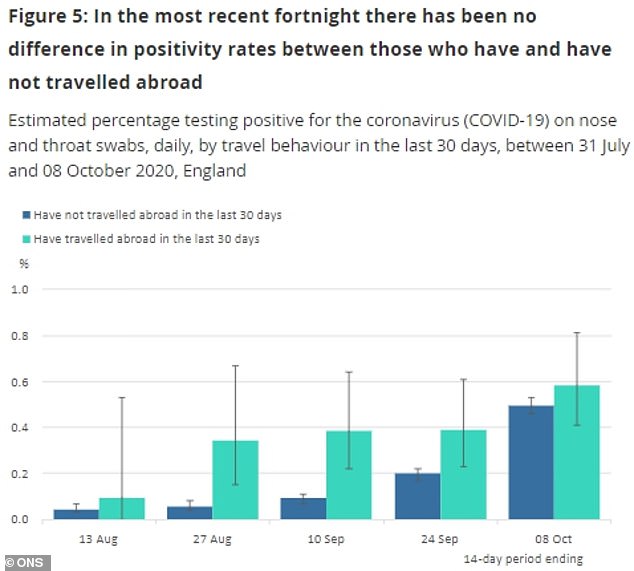 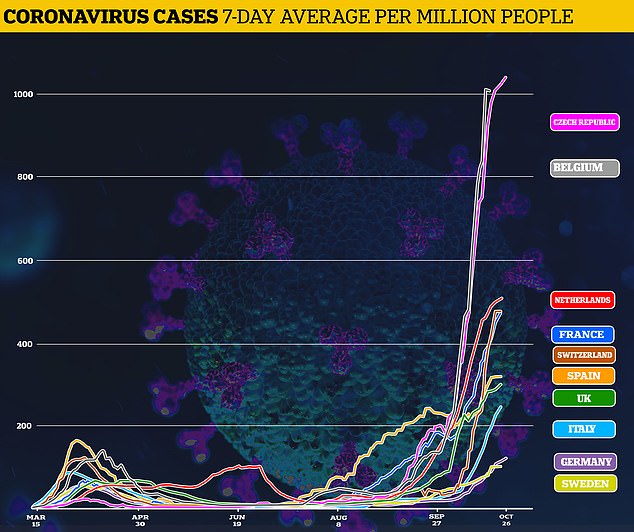 Spain and Italy have both seen infections increase to record levels along with those in France, Britain and other countries, although the Czech Republic and Belgium have the highest rates of any major countries in Europe

Where had the travellers taking part in the ONS survey visited?

NOTE: There is no data on how many people had travelled to each country, or how many travellers returning from the countries below tested positive.

The ONS study found that on average, between 0.46 and 0.53 per cent of people who stayed in the UK for the 30 days before they got swabbed tested positive for Covid-19.

The figure for those who travelled abroad stood at between 0.41 and 0.81 per cent, according to the ONS figures released today.

Statisticians insisted the slight overlap in the range means there is now ‘no longer a difference’ in the rate of cases between people who have travelled abroad and those who did not.

The ONS said this is the first time since mid-August that people staying at home have been just as likely to catch coronavirus as those travelling abroad since mid-August.

They had previously been at the same level of risk between July 31 and August 13 — the first period for which data was available.

But the figures have never been able to definitively caught the virus abroad.

Instead, they just suggest that travellers had picked up the disease on holiday due to the difference in infection rates.

Experts have never addressed whether the higher rates were because those people actually took more risks in day-to-day life.

The risk is calculated by working out the percentage of swabs that were positive in those who had travelled abroad in the 30 days before they were swabbed.

This rate — known as test positivity — is then compared to the figure among the participants who never travelled.

Only three per cent of the people who were swabbed for Covid-19 (5,259 out of 175,313) had actually travelled abroad, going to summer hotspots including Turkey, Portugal and Croatia.

This was a lower proportion than between late August and early September — when it stood at five per cent. 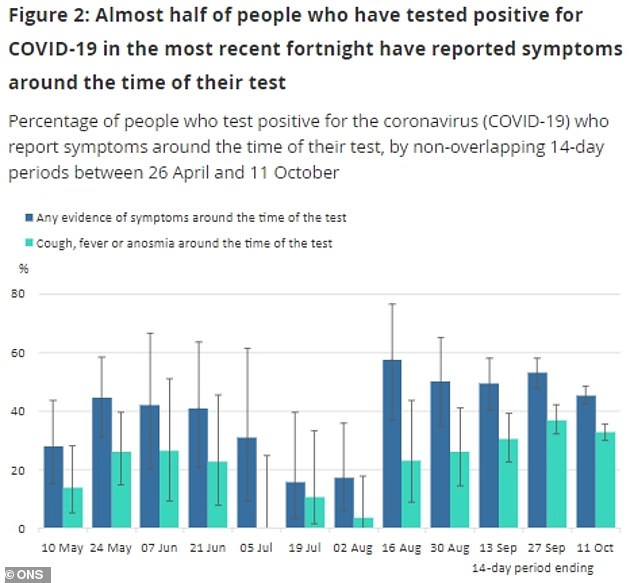 Of those swabbed, more than half of people who tested positive did not report any symptoms 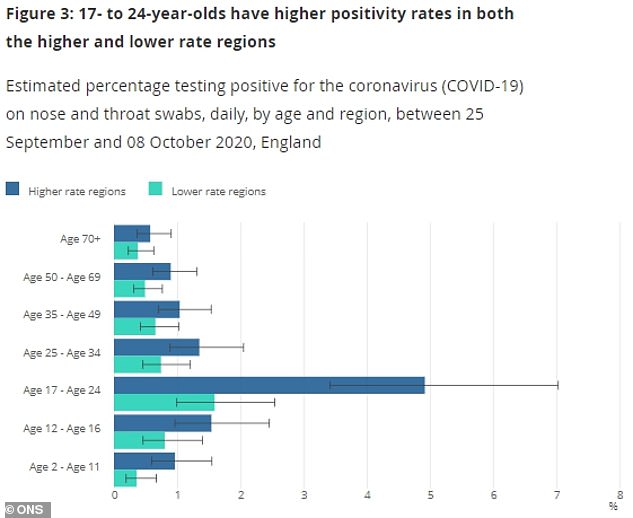 The ONS has found that Britons are just as likely to pick up the virus at home as they are while abroad.

The revelation demonstrates the scale of mounting infections in the UK – and reveals how the country’s second wave has caught up with its neighbours.

England recorded a rate of around 180 Covid-19 cases per 100,000 people in the week ending October 18, the latest for which data is available. This is comparable to other countries.

Case rates in major European countries as of October 25:

Professor Kevin McConway, a statistician at the Open University, pointed to an ONS estimate from mid-August that found people who had travelled abroad were seven times more likely to test positive.

But he added: ‘Since then, the difference in the rate of testing positive has got smaller and smaller.

‘It’s very tempting to speculate that, earlier in the year when infection rates were much lower than they are now, people were bringing back infections from their overseas trips.

‘Indeed that could be the explanation, in part at least.

‘And one could go on to speculate that the reason there’s no clear difference now is that infections being brought back from overseas simply don’t show up statistically on top of the much greater number of infections being transmitted within the country.

‘But that’s not the only possible explanation. The trouble is that this is observational data, and it brings with it all the difficulties of interpretation that apply to any observational research.’

He warned that there would be ‘many differences’ between the people who travelled abroad, and the people who didn’t. Professor McConway said: ‘The overseas travel itself might not be the cause of the difference in positivity, or only part of the cause. We just can’t tell.’

The ONS report also found that 55 per cent of people who tested positive for the virus were not suffering any symptoms at the time of their test — prompting fears the infections may be far more widespread than thought.

They said only 45 per cent of people tested in England between September 28 and October 11 had any symptoms.

And only 33 per cent of those who tested positive were suffering from at least one of the three tell-tale symptoms — a high temperature, continuous cough or loss of taste and smell.

Although this suggests a large proportion of cases may be asymptomatic, experts point out the swabs only had symptoms recorded at the time of their test. 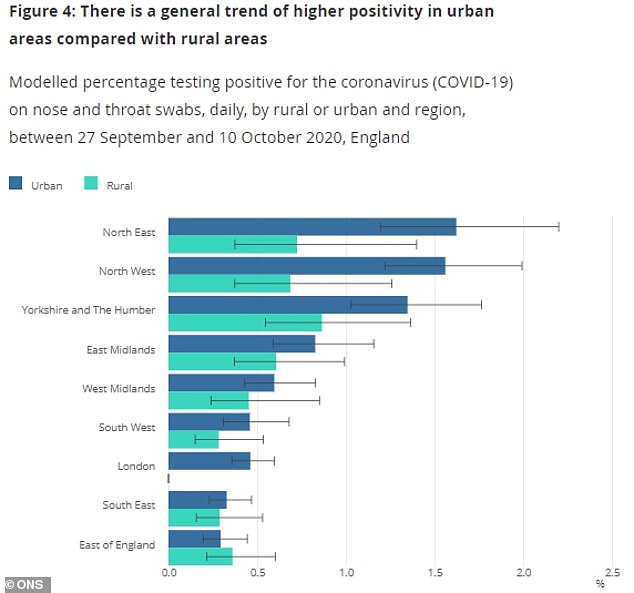 It is possible that those tested went on to develop the tell-tale warning signs shortly after they were swabbed.

The virus works by infecting cells in the nose and turning off their immune response — meaning the body’s immune system doesn’t immediately spot an infection. This means victims will carry on with their daily activities and spread the virus for several days before they feel unwell.

The majority of infections between September 25 and October 8 were recorded in 17 to 24-year-olds, highlighting the fact that Britain’s second wave was driven by one particular age group.

Up to five per cent of those swabbed in this age group tested positive for the virus in worst-hit regions — such as the North West — compared to less than one per cent in people aged 50 and over.

Positivity rates for tests were also found to be higher in urban than rural areas. The ONS said the rate was between 0.56 and 0.88 for urban areas, but in rural places this went down to 0.35 to 0.62 per cent. 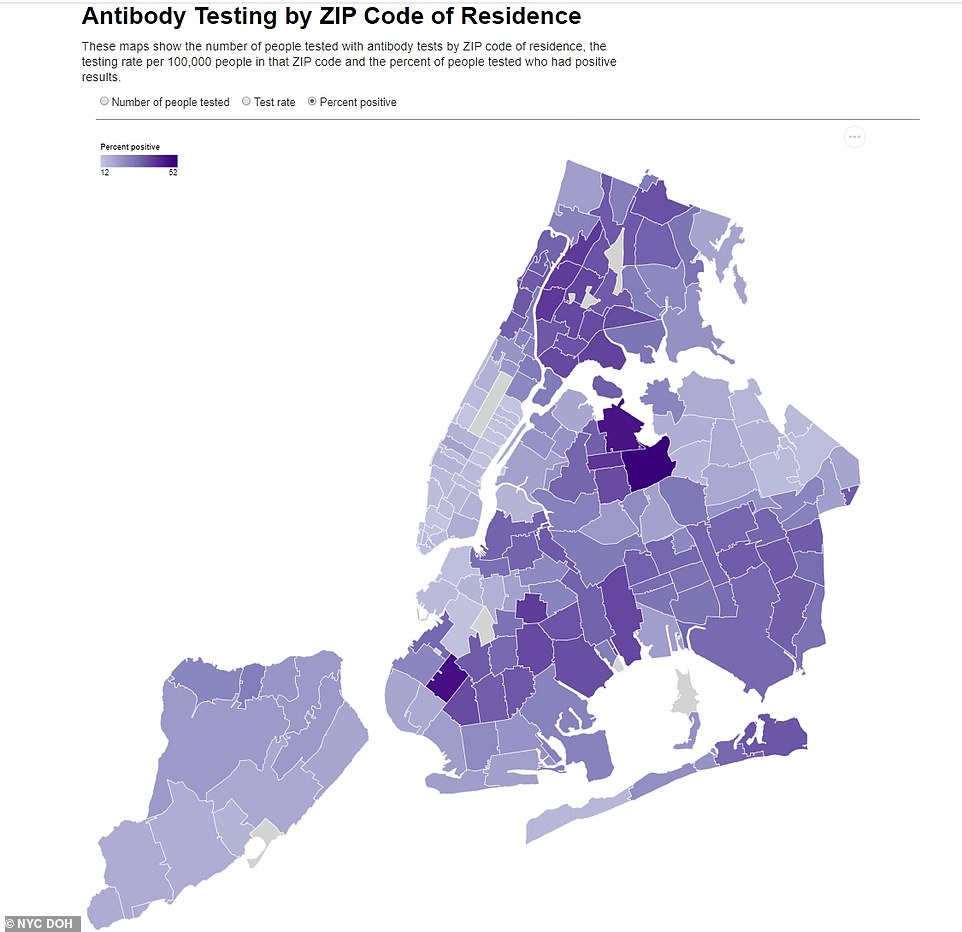 (Reuters Health) – Even the most educated, take-charge individuals may have a hard time deciphering the test results they can access after […] 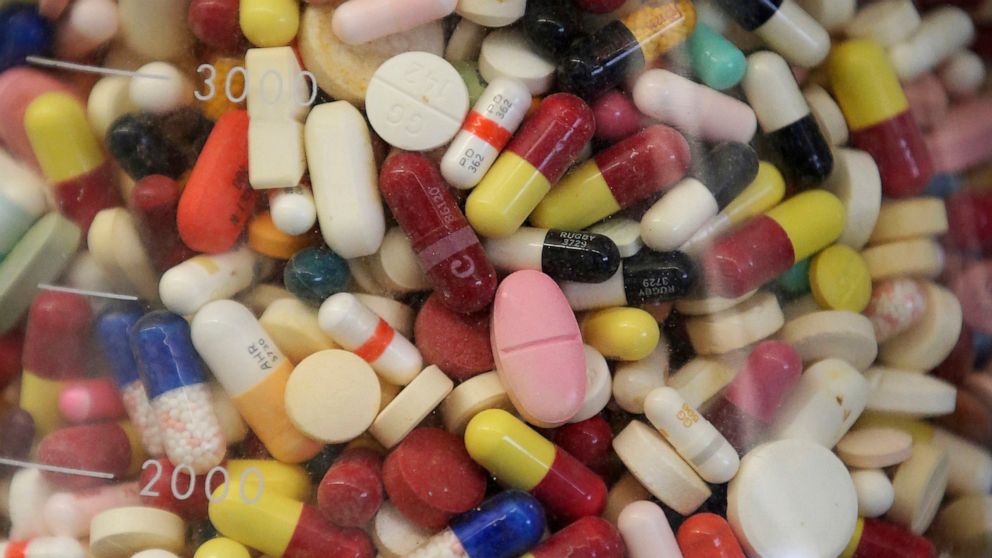 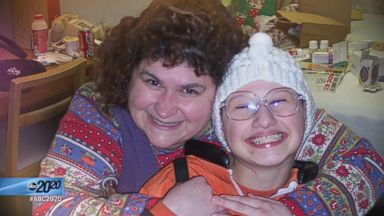 Now Playing: Woman says mom made her use a wheelchair and invented illnesses leading to years of treatment Now Playing: Gypsy Blanchard […]