Megyn Kelly joined in on excoriating California Governor Gavin Newsom on Sunday for his extremely restricting Thanksgiving guidelines, which includes ‘strongly discouraging’ singing at the festivities this year in the midst of the coronavirus pandemic.

In a tweet posted Sunday morning, the former Fox News and NBC News host listed some of Newsom’s ‘Thanksgiving insanity.’

-Must be held *OUTSIDE*;

-Guests may use bathrm inside if sanitized;

-Masks on while not eating;

-Max of two hours together;

-6 feet *mandated* in all directions b/twn all at table & otherwise.’ Kelly posted along with an article from Newsweek posted last week detailing the rules.

As Thanksgiving approaches next month, Newsom and the California Department of Public Health released safety guidelines they say must be observed for all private gatherings. 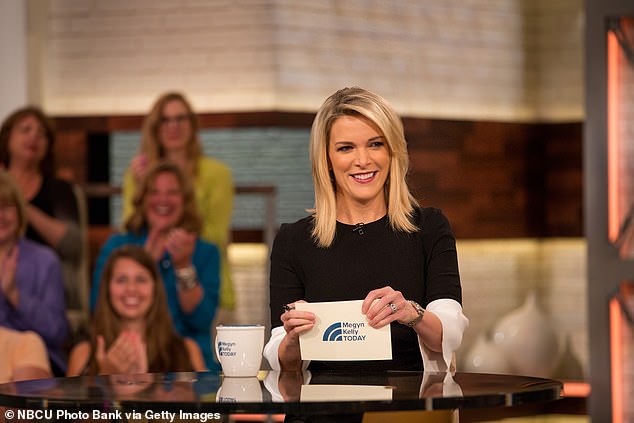 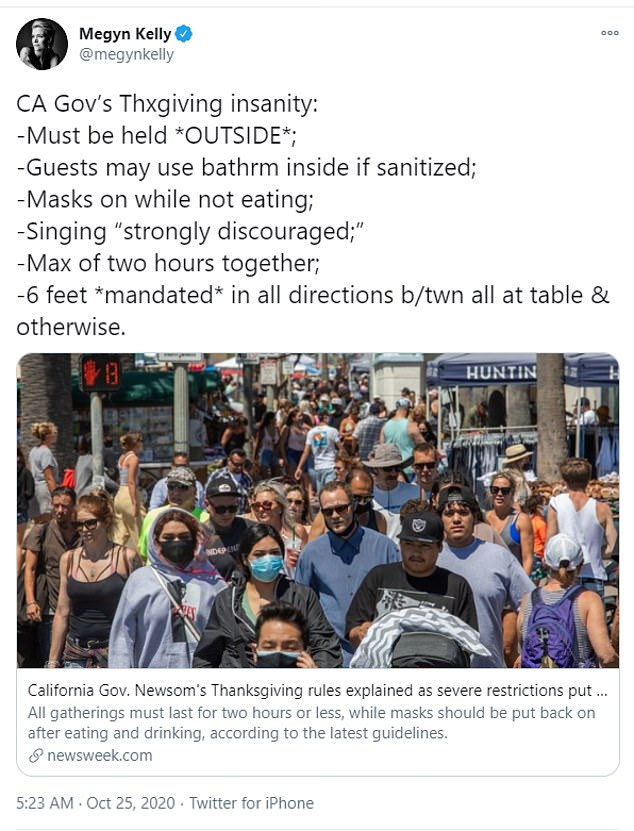 She noted some of the stringent guidelines, including mandating holding the event outside and only allowing people inside to use the frequently sanitized bathroom

Social media users and public figures were quick to react to the Democratic governor’s announcement on attempts to control how people celebrate the holiday.

Comedian and Saturday Night Live veteran Rob Schneider took to Twitter earlier this month to insinuate that Newsom is trying to run California like a monarchy by imposing such stringent rules for individual’s personal and private gatherings on Thanksgiving.

‘Dear Emperor @GavinNewsom,’ Schnieder wrote. ‘During our allotted 3 family limit this Thanksgiving, if my Aunt comes over, can I throw her a slice of turkey from the window?

We promise NOT to sing… we will all just whisper, ‘PLEASE RECALL DIPSHIT GAVIN NEWSON!’ (sic)

‘How many of you sheep are going along with Newsom’s Thanksgiving protocols ?’ he questioned.

Among the rules announced by Newsom and CDPH are a three-household limit, and an urge to hold the gathering outside and keep it short.

‘The longer the duration [of the gathering], the risk of transmission increases,’ the statement noted. ‘Gatherings that occur outdoors are significantly safer than indoor gatherings. All gatherings must be held outside. Attendees may go inside to use restrooms as long as the restrooms are frequently sanitized.’

The rules also allow for attendees to take off face covering ‘briefly’ while eating their Thanksgiving meal, but requires that while they do so they ‘stay at least 6 feet away from everyone outside their own household, and put their face covering back on as soon as they are done with the activity’ of eating or drinking.

The statement concedes that ‘face coverings can also be removed to meet urgent medical needs (for example, to use an asthma inhaler, take medication, or if feeling light-headed).’ 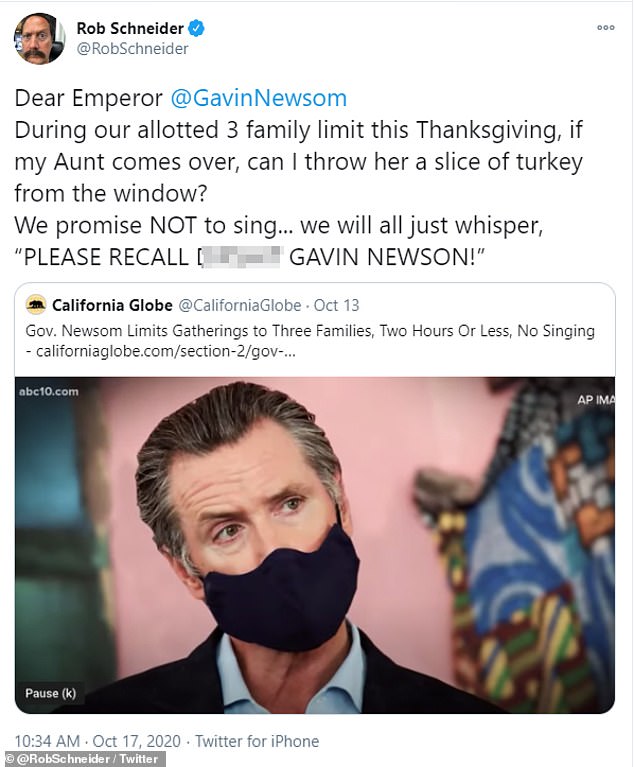 Comedian Rob Schnieder insinuated that Newsom is trying to run California like a monarchy, and sarcastically quipped, ‘We promise NOT to sing… we will all just whisper, ‘PLEASE RECALL DIPS**T GAVIN NEWSOM!’

Another comedian, Adam Carolla, called those going along with the rules ‘sheep’

One Twitter user suggested Newsom could be swaying deep blue California voters to cast their ballot for President Donald Trump to gain personal liberties back.

‘Is Gavin Newsom trying his best to deliver CA for Donald Trump? Because this is insane,’ the user wrote.

Another said, ‘Now Newsom canceled Thanksgiving. What a s**tbag. Lol.’

Someone else noted on Twitter that the rules are not consistent in California, referencing that Levi’s Stadium, where the San Francisco 49ers play, was opened for limited seating.

‘So lemme get this straight. Levi’s stadium can open for limited seating for fans but Newsom expects me to keep my thanksgiving celebration under 2 hours? Lmao idiot,’ they tweeted.

Although not a rule persay, Newsom notes that singing and shouting at the celebration are ‘strongly discouraged.’

‘Singing, chanting, shouting, and physical exertion significantly increases the risk of COVID-19 transmission because these activities increase the release of respiratory droplets and fine aerosols into the air. Because of this, singing, chanting, and shouting are strongly discouraged,’ the statement instructs.

The Thanksgiving host must have enough space that all attendees can maintain six-feet of distance from one another, including while sitting and eating dinner together.

‘Seating must provide at least 6 feet of distance (in all directions—front-to-back and side-to-side) between different households,’ the statement noted. 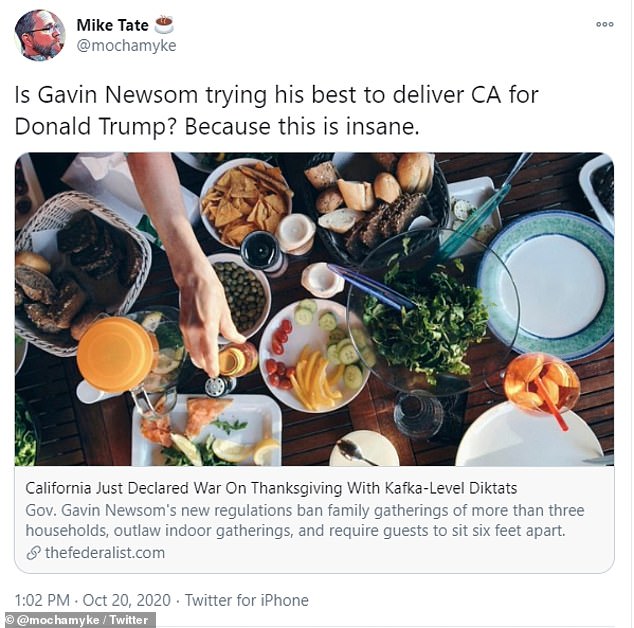 Others took to social media to call out Newsom

The rules allow for people to go inside the residence to use the restroom, as long as it is frequently sanitized between different individuals entering the space.

To this point, the host must also provide a readily accessible hand-washing or hand sanitizer station so people can use it whenever they want.

The statement requires food and drink be served in disposable containers and in a non self-serve manner so there are no communal containers or utensils being used.

Nearly 225,000 Americans have died from coronavirus and California is one of the states most hard-hit by the pandemic.

Next-gen consoles are here. So are the games

Brexit talks must have breakthrough this week – UK and Ireland

Inside the growing movement to decriminalize psychedelic therapies

Looking for furnished rooms in Manhattan: Consider these factors