El Paso County in Texas has ordered a curfew between 10pm and 5am as the number of cases COVID-19 skyrocket and all hospitals reach 100 percent capacity.

The drastic move was announced late Sunday afternoon by El Paso County Judge Ricardo Samaniego and will remain in place for the next two weeks.

Samaniego said El Paso is now ‘at a crisis stage’, with all of its hospitals and intensive care units now full as the region grapples with a troubling surge in COVID-19 cases.

The fine for breaking the curfew is $500 and anyone caught not wearing a face mask will face a $250 penalty. 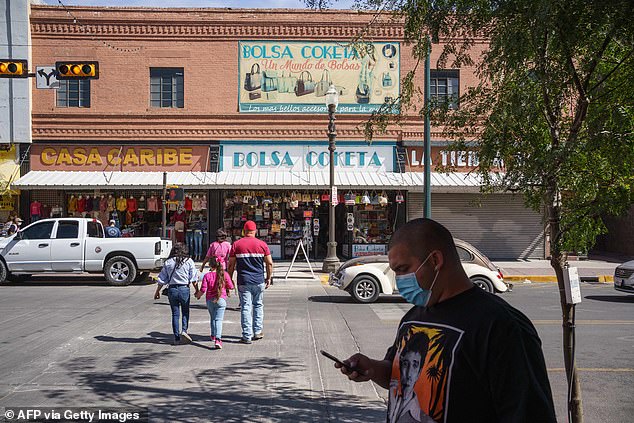 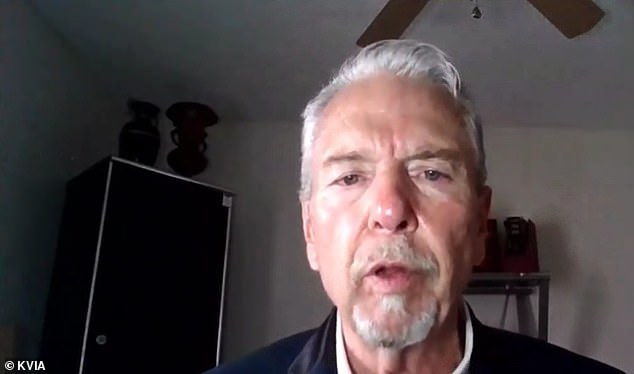 All parks and recreational facilities have been also closed throughout the city of El Paso and El Paso county for 14 days.

Samaniego said complete a shutdown was considered by officials to stem the coronavirus spike, however it was opted against because of the devastating impact such a motion could have economically.

‘It’s going to be critical for our community to stand firm,’ Samaniego said.

The judge added that the next two weeks will be crucial in determining how locals will celebrate Thanksgiving next month.

‘As Thanksgiving is coming up and…Halloween coming up as well…we’ve always had peaks on the holidays, my goal is that we’re able to understand – very clearly – before Thanksgiving as to how we’re going to address and what limitation will be applied during the Thanksgiving holidays,’ Samaniego said.

‘So these next two weeks are very important for our community to show that we’re able to relax on some of them – so that we can have a different situation headed into that holiday,’ he added.

Over the last three weeks, the number of hospitalized COVID-19 patients in the El Paso area has tripled from 259 to a record 786, according to state data. More than 170 of those patients remain in intensive care.

El Paso health officials announced 517 new cases of COVID-19 on Sunday, bringing the county’s total up to more than 39,920.

The total figure has skyrocketed from the fewer than 25,000 cases recorded at the beginning of the month.

Three new deaths were also reported Sunday, bringing up the county’s total for 593 since March.

‘If we continue on this trend, we risk detrimental effects to our entire healthcare system,’ the city’s public health director, Angela Mora, said in a statement. ‘For the sake of those hospitalized and the frontline healthcare workers working tirelessly each day to care for them, we ask you to please stay home for two weeks and eliminate your interactions with those outside your household until we can flatten the curve.’ 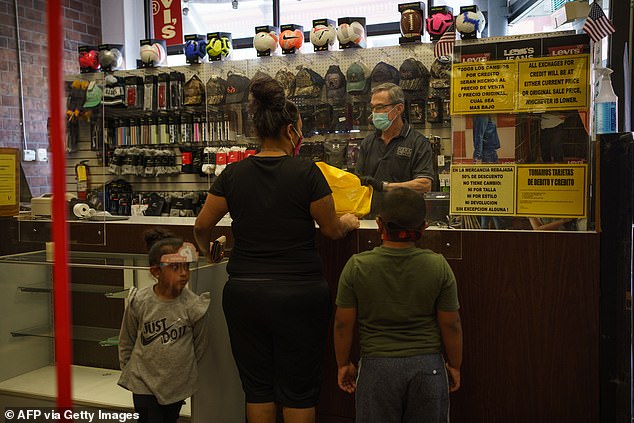 Samaniego said El Paso is now ‘at a crisis stage’, with all of its hospitals and intensive care units now full as the region grapples with a troubling surge in COVID-19 cases 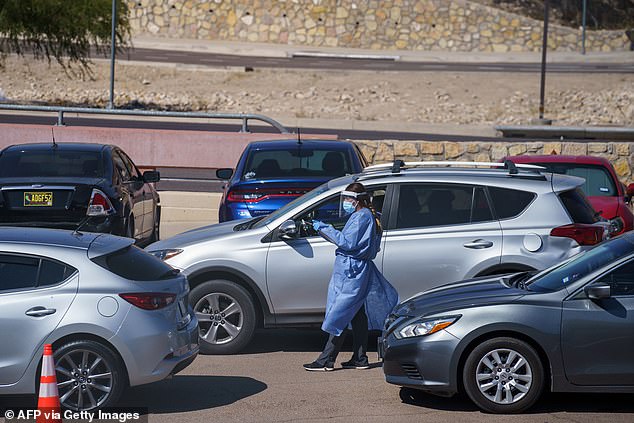 Over the last three weeks, the number of hospitalized COVID-19 patients in the El Paso area has tripled to a record 786, according to state data (pictured: Nurses gather information from patients lining up in their cars for Covid-19 tests at the University of Texas El Paso on October 23)

Also speaking during Sunday afternoon’s press conference was CEO of the University Medical Center Jacob Cintron, who said COVID-19 hospitalizations are the highest in El Paso since the beginning of the pandemic.

On Saturday, Texas Governor Greg Abbott asked the federal government to allow the use of an army medical center at Fort Bliss by non-coronavirus patients to ease the burden on hospitals.

A decision on the request is expected soon, officials said. In the meantime, a task force from the state of Texas will be providing additional tents at University Medical Center of El Paso and structures at other hospitals to help treat the overflow of patients.

The center will initially be equipped with 50 beds but will be handed the resources to expand to 100 beds if needed, a statement from the governor’s office said.

Abbott said the state has already sent 900 doctors, nurses and other medical staff to El Paso, some of which will be used to staff the convention center hospital.

If moves to address hospitals’ strain do not work, El Paso Mayor Dee Margo recently said he will request the governor implement even tighter measures.

Margo pleaded with residents to mind their behavior to avoid ‘drastic measures.’

Spikes in coronavirus cases have been recorded across the US in recent days, with 83,718 new cases reported Saturday, as well as 914 deaths.

Hospitalizations are also rising and have hit a two-month high and deaths are trending upwards, according to a Reuters tally.

So far in October, 29 states have set records for increases in new cases, including five considered key in the November 3 presidential election: Ohio, Michigan, North Carolina, Pennsylvania and Wisconsin.

Cases in the Midwest set a new record on Saturday and the number of hospitalized COVID-19 patients in that region hit an all-time high for the ninth day in a row.

Hospitals are strained in several states including North Dakota, which is the hardest hit based on recent new cases per capita, according to a Reuters analysis. 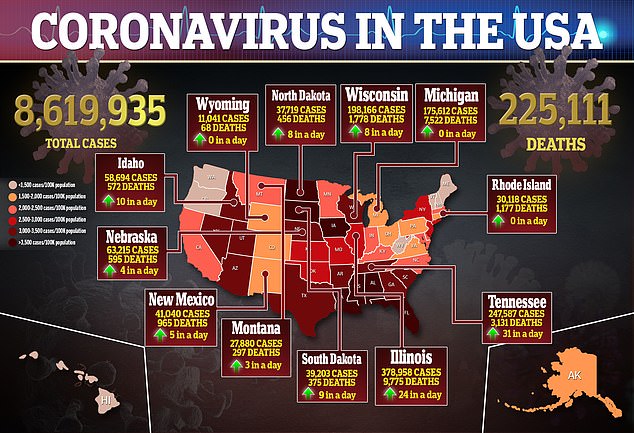 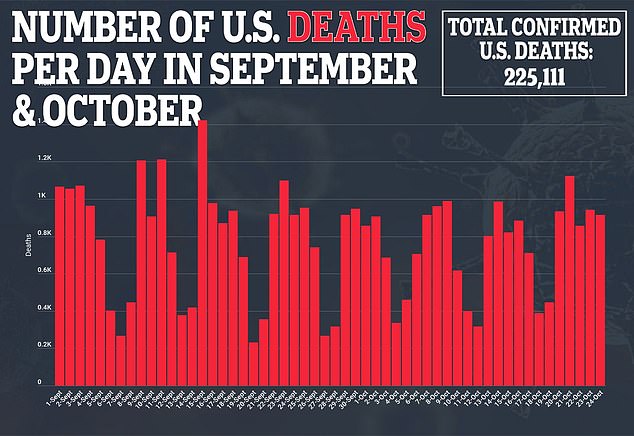 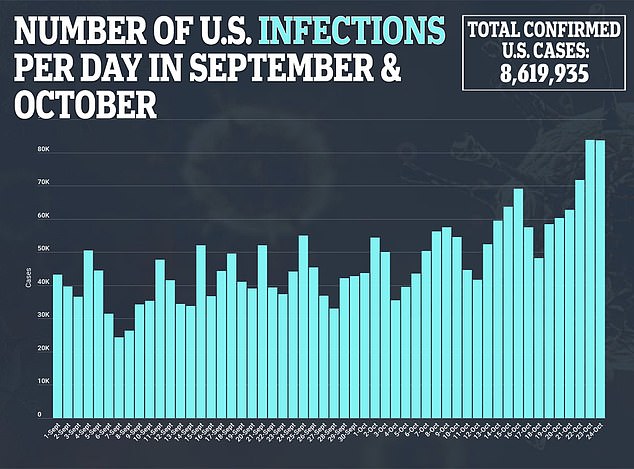 Dominic Cummings leaves Downing Street with his belongings in a box

Just like the USSR! Orban savages Brussels in furious rant as he blasts 'blackmail'