The US Food and Drug Administration (FDA) gave full approval to the antiviral drug remdesivir as a coronavirus treatment on Thursday.

Manufactured by California-based Gilead Sciences Inc, the medication was the only approved for emergency use in the US to treat severely ill COVID-19 patients.

It was also one of among a cocktail of drugs used to treat President Donald Trump when he contracted the virus earlier this month.

According to the FDA’s website says the drug has been approved in two forms: five milligrams (mg) per milliliter dropper and 100 mg per vial.

A recent study from the National Institutes of Health found that remdesivir shortened coronavirus hospital stays by five days and reduces the risk of death by 30 percent. 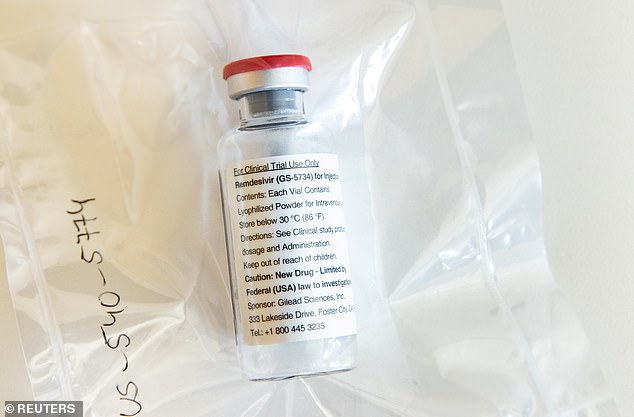 On Thursday, the FDA approved the antiviral drug remdesivir (pictured) as a treatment for coronavirus patients

Remdesivir, sold under the brand name Veklury, was developed by Gilead Sciences to treat Ebola, the deadly hemorrhagic fever that emerged in West Africa in 2014.

It works by blocking an enzyme that helps the coronavirus make copies of itself and, in turn, spread throughout the body.

In May, after two studies showed remdesivir could shorten hospital stays, the FDA granted the drug emergency use authorization for hospitalized patients.

‘Since the beginning of the COVID-19 pandemic, Gilead has worked relentlessly to help find solutions to this global health crisis,’ Gilead CEO Daniel O’Day said in a statement.

‘It is incredible to be in the position today, less than one year since the earliest case reports of the disease now known as COVID-19, of having an FDA-approved treatment in the US that is available for all appropriate patients in need.’

A recent NIAID study published last month, which Beigel co-authored, found the drug reduced the recovery time for hospitalized coronavirus patients from a median of 15 days to 10 days.

Additionally, about 11 percent of patients in the remdesivir group died compared to around 15 percent in the control group.

This show the drug reduced the risk of death by 30 percent.

The team said the benefit of remdesivir was largest when given earlier in the illness, but it was still seen for those that received it later.

‘In fact, the study showed there was still benefit. Even people that came in quite late, after 10 days [of illness], they still had benefit from resdesivir,’ Beigel told DailyMail.com in a recent interview.

‘It wasn’t as strong. Getting treatment early is still a benefit, but there was clear benefit for those that came in 10 days or more also ‘

In August, Gilead Sciences announced it had ramped up production by 50-fold and was planning to manufacture more than two million treatment courses – equivalent to 12.5 million doses – by the end of the year.

The company has entered voluntary licensing agreements with nine generic manufacturers around the globe to keep up with demand.

Coronavirus: How thousands died of Covid-19 they caught in hospitals

Medicare's 'Part B' outpatient premium to rise by $3.90

Without Ginsburg, high court support for health law in doubt