A more invasive cousin of the notorious Japanese knotweed has been spotted in Buckinghamshire.

Called Bohemian knotweed (Fallopia Bohemica), it is a hybrid created from cross fertilisation of the Japanese and Giant varieties.

A homeowner discovered the rare weed in his garden and called in experts with diggers to remove the invasive plant, which can destroy a property’s value.

Similar to its cousins, Bohemian knotweed is exceptionally strong and its roots are capable of growing through concrete, drains, mortar, brick and even cavity walls.

Around four per cent of British properties are plagued by knotweed, but only two per cent of these cases involve the rare Bohemian variety.

As a result of its reputation and potential to cause severe damage, knotweed infestation can knock ten per cent off a proprieties value. 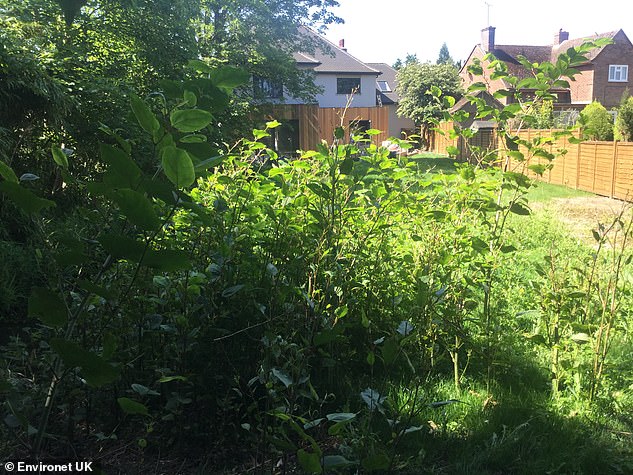 The rare Bohemian Knotweed was found in Aylesbury (pictured). The pest species can bring down the value of a house if it is not removed 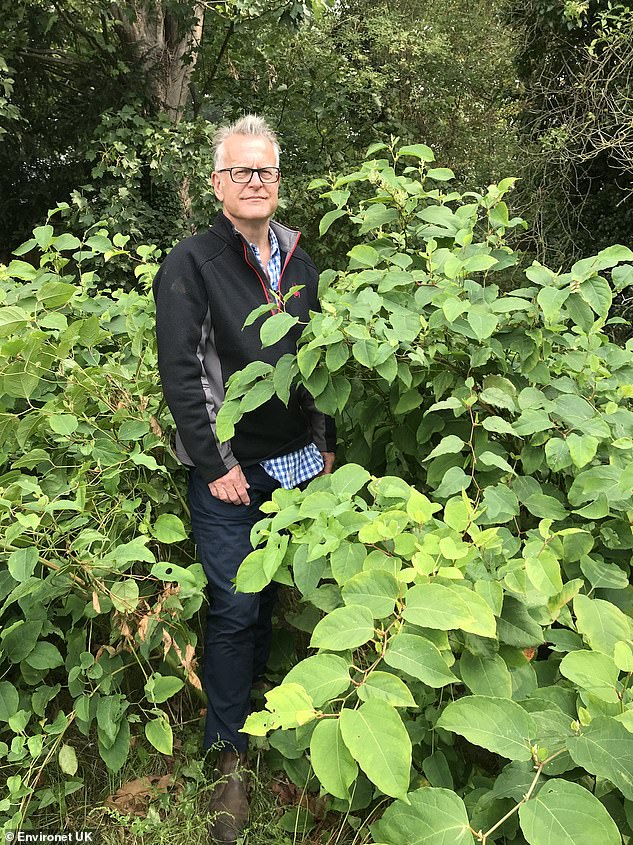 Stuart Marshall (pictured) found the species in the garden of a house he inherited in Aylesbury, Bucks, and had to have it professionally removed 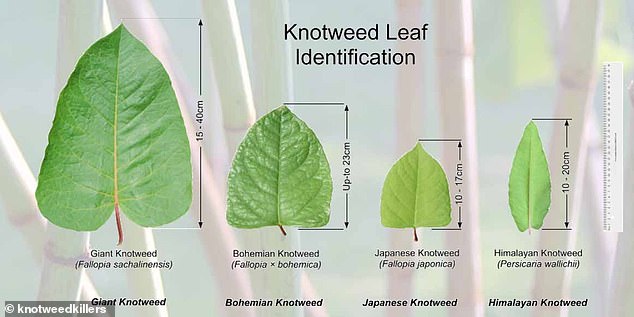 The leaves of the Bohemian Knotweed are larger than Japanese Knotweed but smaller than Giant Knotweed, and it has a creamy white to greenish white flower

Stuart Marshall found the species in the garden of a house he inherited in Aylesbury.

‘I was clearing the garden when I came across the plant which seemed to be growing vigorously, but otherwise didn’t look particularly menacing,’ he said.

‘I only became suspicious that it might be invasive when my attempts to remove it failed.’

Growing concerned he called in the experts at Environet, a British company which specialises in tackling invasive plants, such as bamboo and Japanese knotweed.

‘Environet immediately identified it as Bohemian knotweed which I’d never heard of before,’ Mr Marshall says.

‘I’m renovating the house to sell so decided to have the plant excavated, which only takes a couple of days, with a root barrier installed to protect the home in the future.’ 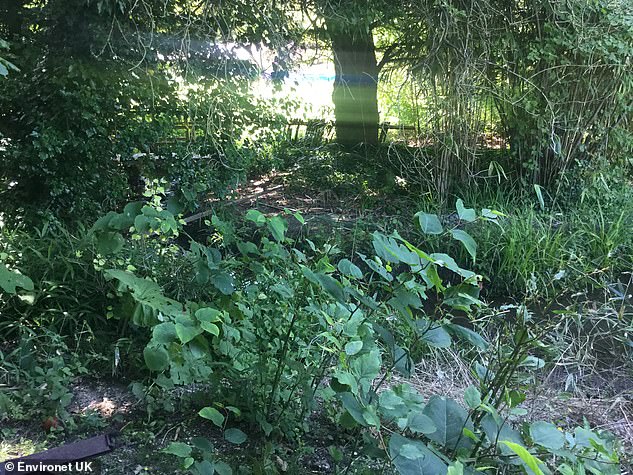 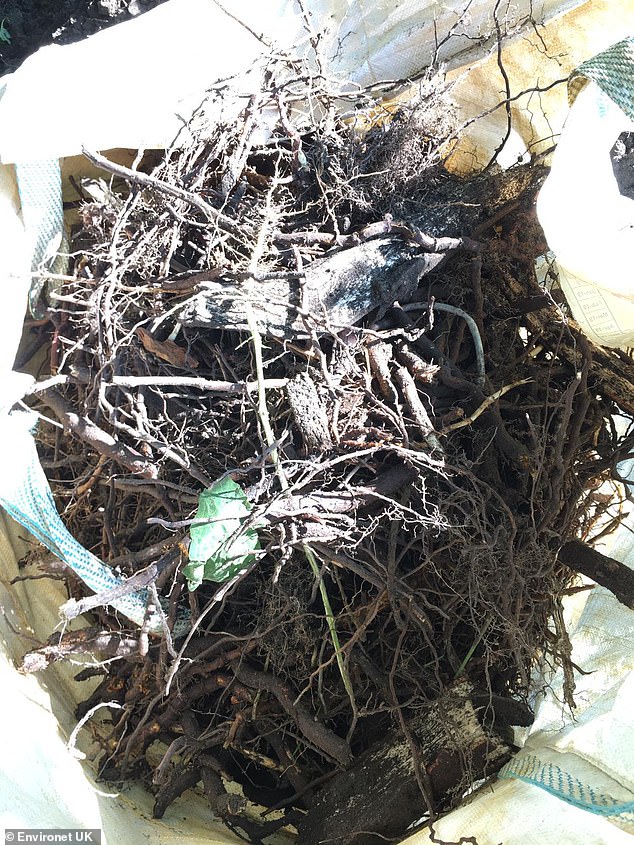 Bohemian knotweed spreads rapidly via its powerful rhizome (root) system (pictured) which can grow up to two metres deep, making it very difficult to remove

WHAT IS BOHEMIAN KNOTWEED?

Bohemian Knotweed was introduced to Ireland as an ornamental plant but has become widespread as a pest plant, especially along rivers and roadways.

The leaves of the Bohemian Knotweed are larger than Japanese Knotweed but smaller than Giant Knotweed, and it has a creamy white to greenish white flower.

They can also vary in shape from square ended to heart shaped and both variations can appear on the same plant.

This plant has the ability to produce male plants and produce viable pollen.

Can grow to 10ft (3m) tall and this hybrid is considered to be more vigorous than either of its parents, it spreads quicker and could potentially be harder to eradicate.

Although not common, it can spread quicker than its infamous relative and has the potential to do far more damage as a result.

This is due to the fact that this variation can make male plants and set seed, allowing it to rapidly spread.

Japanese knotweed cannot do this as there are no males in the UK.

‘It grows rapidly, creating dense canopies of shade and intercepting rainfall, thereby limiting the ability of surrounding plants to flourish.

‘It spreads rapidly via its powerful rhizome (root) system which can grow up to two metres deep, making Bohemian knotweed very difficult to remove.

‘Heavy machinery and expertise are required to ensure the entire root system is excavated from the ground, as if even a piece as small as a fingernail is left in the soil it has the potential to regrow.

‘Cutting the leaves and stems back will actually encourage the plant to grow and spread.’

When its ability to spread like wildfire is combined with the fact it looks different to other weeds, it has the ability to take over an entire garden before a homeowner is even aware they have a problem.

The sale of Mr Marshall’s house is expected to go ahead without issue now the plant has been successfully eradicated from the garden.

‘Evidence of a professional treatment plan and an insurance-backed guarantee for the work should be enough to satisfy any mortgage lender, although sellers may find there’s still some diminution in the value of the property due to the associated knotweed stigma,’ Mr Seal adds.

Environet is also training dogs to sniff out knotweed in a bid to make it easier to find signs of infestation.

It is thought that around four per cent of Britain’s homes are affected by knotweed, either directly or indirectly via a neighbouring property, according to a 2018 YouGov survey.

Its discovery knocks around 10 per cent off the value of a home.

Training twin brother Labradors Mick and Mack took less than three months — and was based on their love of tennis balls.

In the early days, a ball was placed next to a small amount of knotweed. The size of the ball was gradually reduced, until the knotweed became a stronger scent than the ball.

Eventually, there was no ball at all, though the dogs still associated the knotweed with it.

Japanese knotweed was introduced here from Japan in 1850, when it was regarded as a rare beauty thanks to its white flowers.

It can grow at a rate of 10cm per day, reaching up to three metres by late summer. It spreads horizontally underground for up to seven metres if its growth is blocked vertically, seeking to break through the surface wherever it can.

It can be sprayed with glyphosate-based herbicide but that doesn’t eradicate it. Even if it’s dug out, traces of its root could remain and germinate. 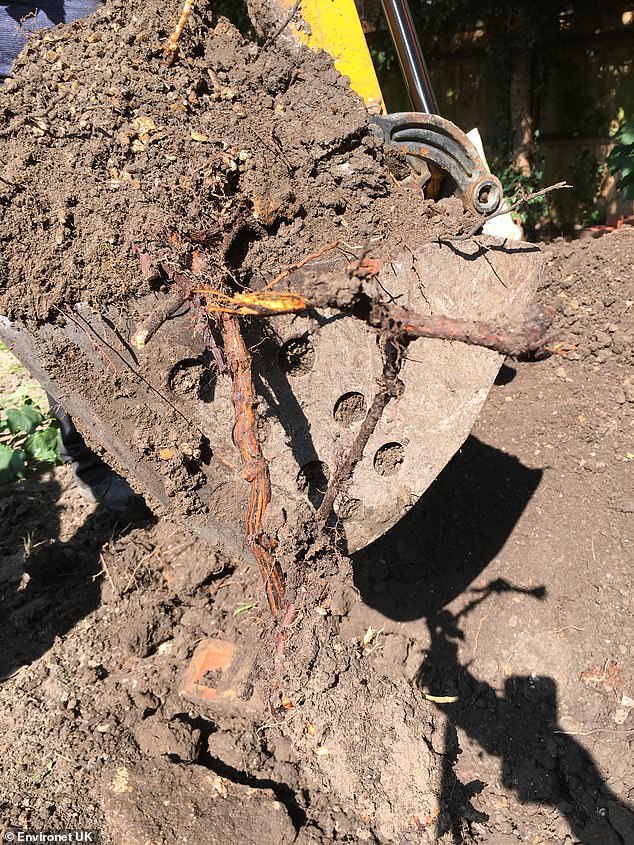 True eradication of the invasive plant is very difficult as the roots stretch up to two metres deep, and expert excavation is needed, as well as heavy machinery, including diggers (pictured, the removal of the Bohemian variety in Buckinghamshire) 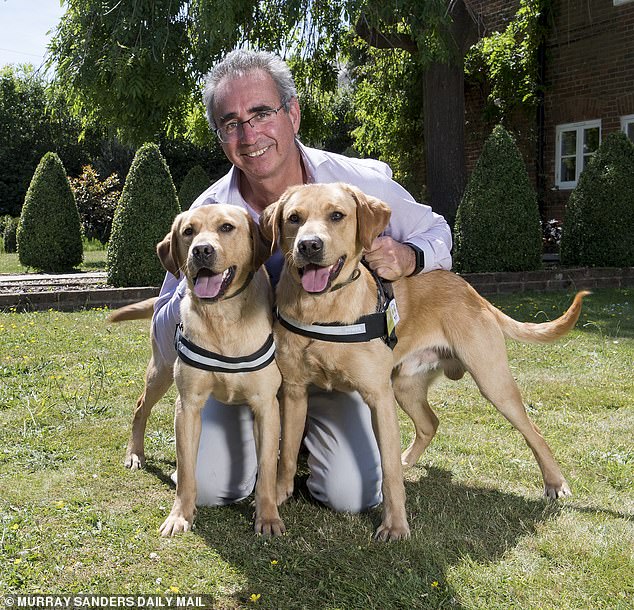 Environet is also training dogs to sniff out knotweed in a big to make it easier to find signs of infestation. It is thought that around four per cent of Britain’s homes are affected by knotweed, either directly or indirectly via a neighbouring property

Vitamin D may not help with severe COVID-19 cases, contrary to what researchers thought

A full Beaver Moon and lunar eclipse are coming Monday

Covid-19 news: Infections in England fell 30 per cent during lockdown

‘The game has changed.’ AI triumphs at solving protein structures

Space war would be a 'catastrophe' – 'No clear winner'

One of biology's biggest mysteries 'largely solved' by AI

‘Absolutely remarkable’: No one who got Moderna's vaccine in trial developed severe COVID-19

Michael Jackson wife: What did Lisa Marie Presley do after her marriage to MJ?