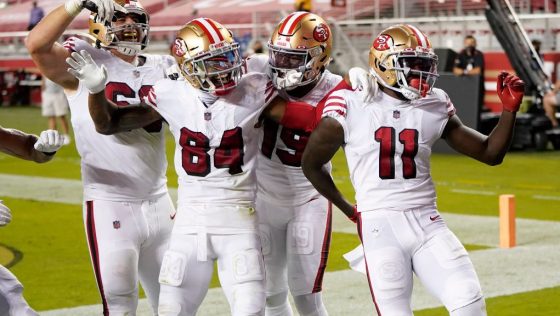 The Rams have four victories. All four came against the NFC East.

Unfortunately for the Rams, they don’t play in the NFC East.

The Rams fell to 0-2 against teams outside the NFC East, losing 24-16 to the 49ers. San Francisco improved to 3-3 in the first of a brutal seven-game stretch.

The 49ers jumped out to a 21-6 halftime lead and held on without running back Raheem Mostert, who left with an ankle injury after one carry in the second half.

After the two-minute warning, Deebo Samuel took a flip pass from Jimmy Garoppolo that was more a rush than a catch and picked up 11 yards on third-and-seven to ensure the Rams wouldn’t see the ball again.

Garoppolo, who rebounded from last week when he lasted only 31 plays because of his ankle injury, went 23-of-33 for 268 yards and three touchdowns. George Kittle had seven catches for 109 yards and a touchdown, and Samuel made six receptions for 66 yards and a score.

The biggest plays of the game came late in the third quarter after the Rams reached the San Francisco 2. On third down, Cooper Kupp dropped what should have been a touchdown pass from Jared Goff.

The Rams elected to go for it on fourth down, and Goff’s pass, intended for Josh Reynolds, was picked by Jason Verrett. It was Verrett’s first interception since Sept. 11, 2016, against Alex Smith and the Chiefs.

Goff finished 19-of-38 for 198 yards with two touchdowns and an interception.

After making four sacks last season, Aaron Donald had only two tackles and a quarterback hit.

'He will be away from children': Houston-area priest pleads guilty to child indecency charges

12 Grammy facts: BTS and Dr. Luke in, The Weeknd out