Shocking bodycam and dashcam video from Seattle police captures the moment a man brandishing a piece of burning lumber charges at a patrol car and smashes it through the window while the officer is still inside.

Detectives with the Force Investigations Team have released body-worn, dashcam, and surveillance video from the incident which happened on Thursday in the South Lake Union area of the city.

In the three videos which capture the incident from all angles, the suspect can be seen wielding a burning piece of wood to launch an attack on the officer in the patrol car. 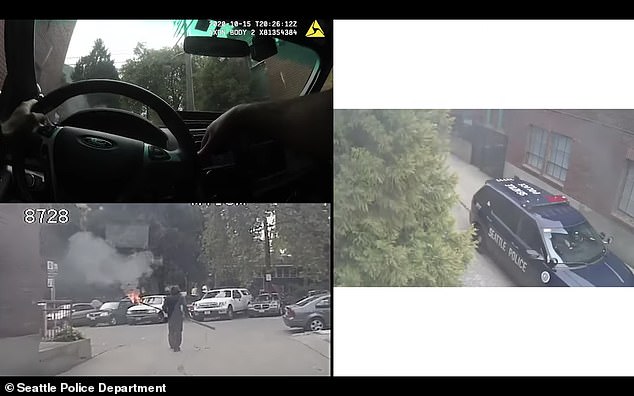 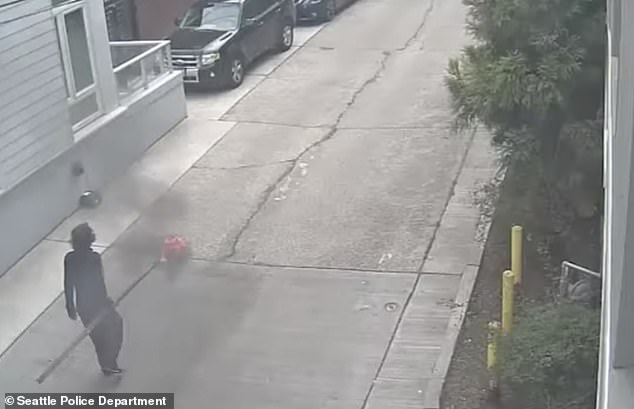 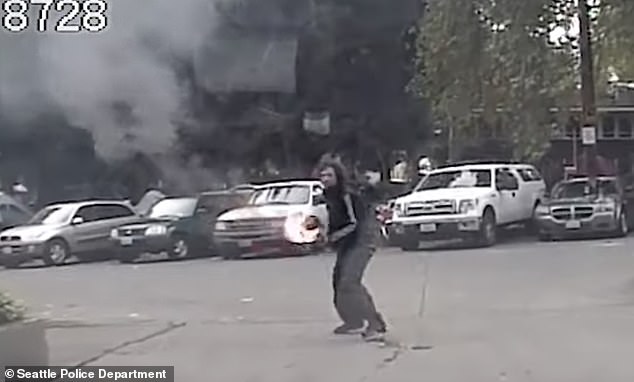 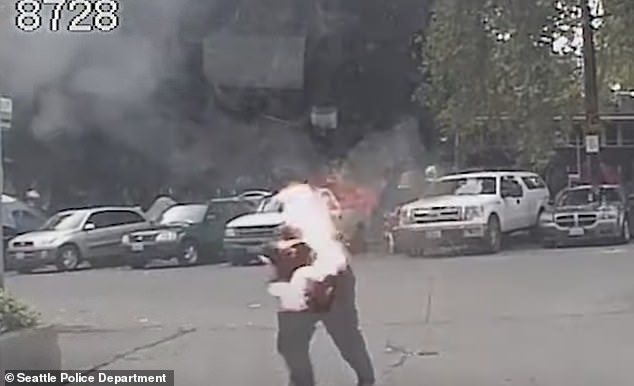 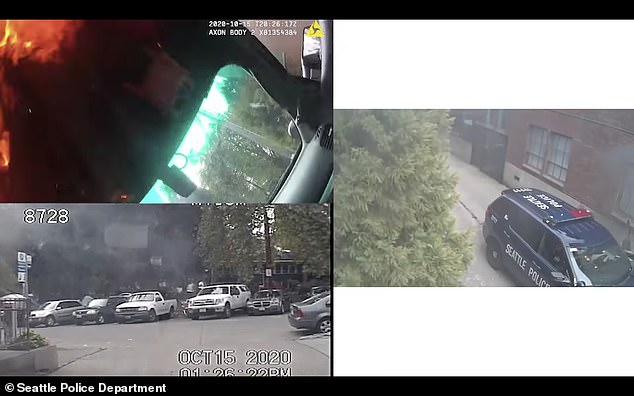 Top left, the flames appear to penetrate the vehicle. Bottom left, dash cam shows thick smoke in the air, while right, the patrol car can be seen stranded in the alley as the attack takes place

The officer had been responding to a call that a man had been seen carrying a ‘flaming piece of lumber.’

Using the car’s loudspeaker, the officer instructs the man to stop and put down the fiery weapon.

The suspect suddenly turns to run directly at the vehicle with bright orange flames leaping from the piece of wood. 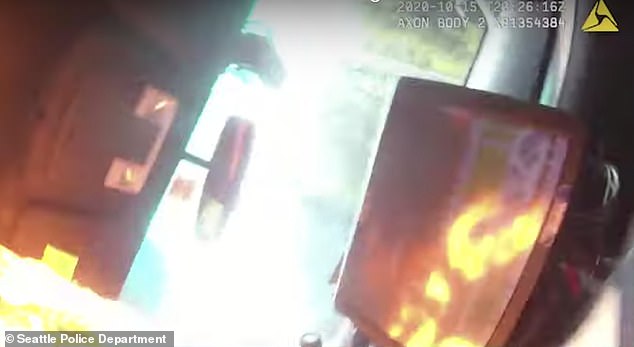 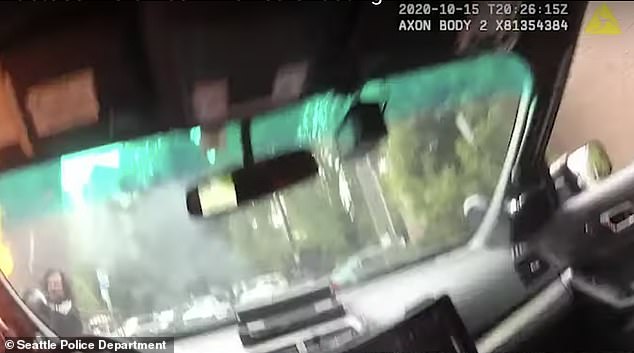 After throwing the items at the car, the suspect then begins to run away as the officer opens fire through his windshield.

Detectives later booked the 37-year-old suspect, who was not struck by the gunfire, into King County Jail.

The officer, Caleb Pomazon, has been with the Seattle Police Department for one year and is currently on paid administrative leave as per department policy.

The officer sat in a police vehicle parked in an alley between Dexter Avenue and John Street, where he encountered the suspect.

‘The officer found the man, who threw the flaming lumber—believed to be a 2×2—into the patrol vehicle while the officer was still inside,’ a press release said. 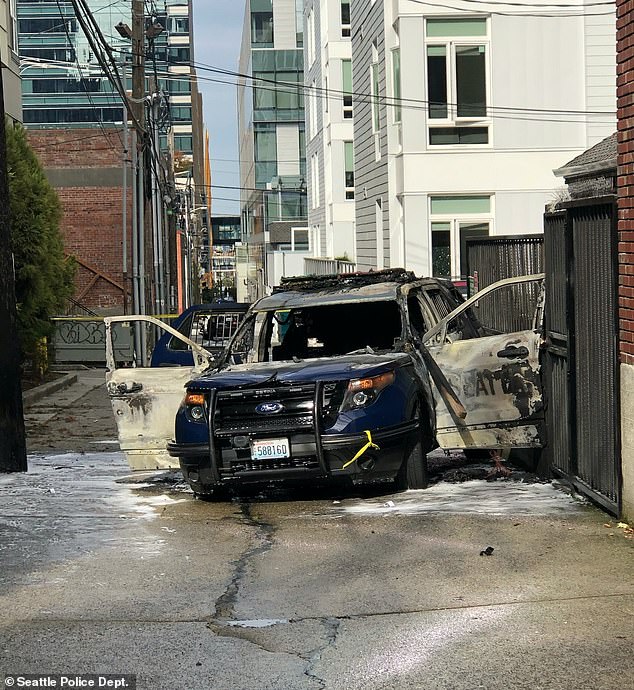 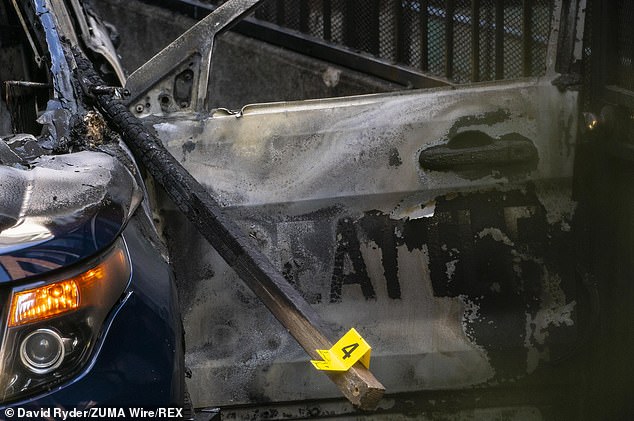 Seattle Police investigate after a suspect attacked a police vehicle with a burning piece of wood. The 2×2 piece of lumber was still lodged into the driver’s side window 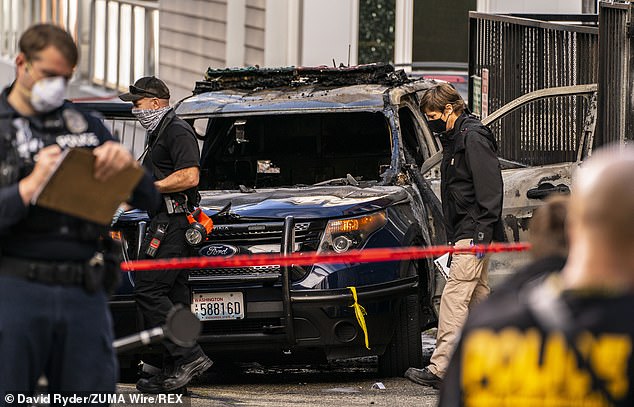 The officer inside the vehicle suffered minor burns.

Additional officers arrived to the scene and chased the suspect into a nearby parking garage, where one person deployed a Taser gun at the suspect and took him into custody.

The officer was transported to Harborview Medical Center with non-life-threatening burns. 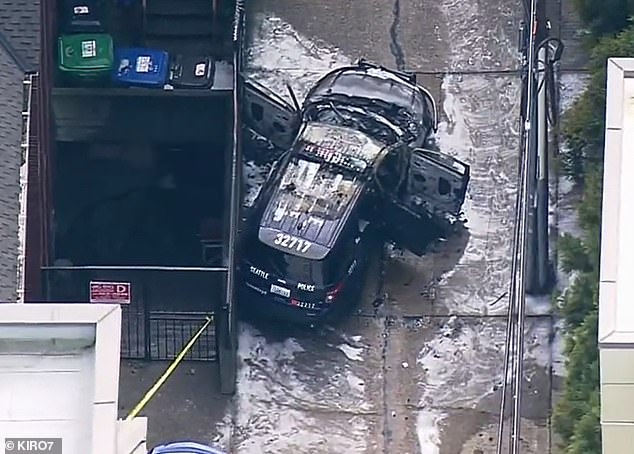 Pictured: on overhead photo of the burnt police cruiser shows the extensive damage suffered after the incident 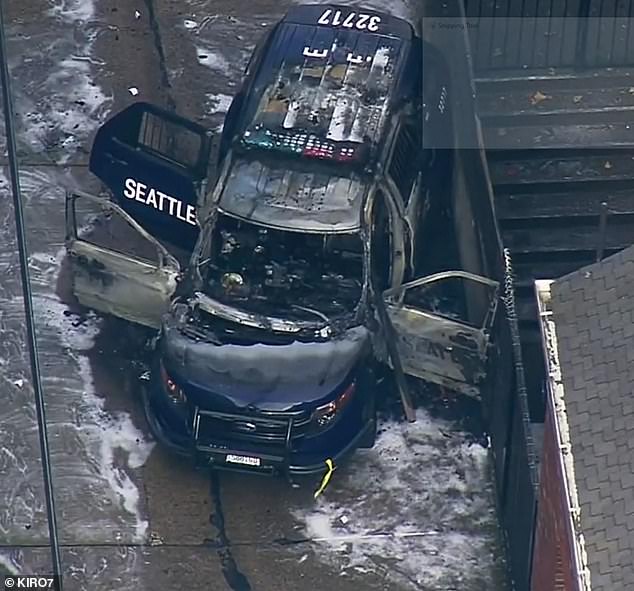 While officers chased after the suspect on Thursday afternoon, the police cruiser continued to burn as emergency crews rushed to the scene

The piece of flaming wood, which was a large piece of lumber, that was thrown at an occupied #Seattle police cruiser can be seen in this photo-shared by local news station Q13FOX.

The officer is currently in HMC hospital for injuries sustained during the fire.

Meanwhile, flames continued to overtake the police cruiser and it was soon engulfed in an all-encompassing inferno.

Cellphone footage taken by a witness showed clouds of black smoke billowing into the Seattle air as fire burst from the interior.

A photo shared by the SPD revealed the cruiser suffered severe damage, with the windows blown out, paint peeling from the flames and the metal contorted by the heat.

What appeared to be the 2×2 piece of lumber was still lodged into the driver’s side window.

The suspect, who was not identified by authorities, was arrested on Thursday evening and taken into custody

The suspect was arrested on investigation of assault and possibly arson.

Neither the suspects identity or the alleged motive have been disclosed.

Authorities later checked the surrounding buildings in the area to ensure no other residents were injured during the incident.