NBC says Trump’s town hall will still go ahead as scheduled this evening, despite a letter from more than 100 actors, producers and writers who blasted the decision to hold the event at the same time as Joe Biden’s ABC town hall.

In a Thursday statement, NBCU News Group chairman Cesar Conde said that though ‘we share in the frustration’ over the scheduling clash, Trump’s town hall will still proceed as planned.

‘We aired a town hall with Vice President Biden on October 5 at 8pm,’ Conde told the Hollywood Reporter. ‘If we were to move our town hall with President Trump to a later timeslot we would be violating our commitment to offer both campaigns access to the same audience and the same forum.’

He added the decision is ‘motivated only by fairness, not business considerations.’

Conde’s statement came in response to an open letter penned to NBC by 105 Hollywood heavyweights earlier Thursday, who asked for the Trump town hall to be shifted from its current 8pm time slot.

In the letter, the group doesn’t criticize NBC for hosting the Trump town hall, rather that the network is allowing the president to ‘counterprogram’ his rival, after the he refused to debate Biden virtually. 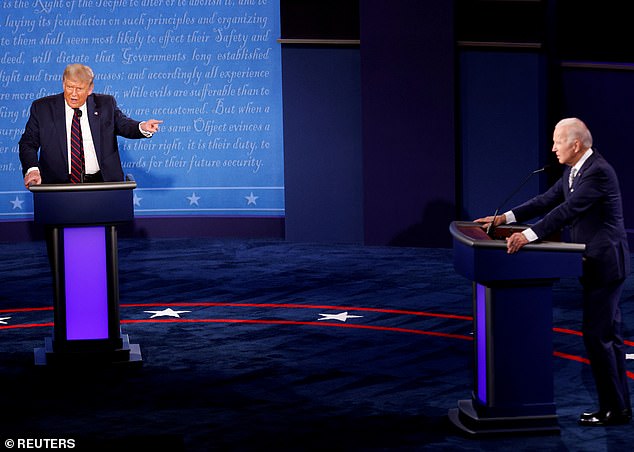 In the letter, addressed to Comcast CEO Brian Roberts, NBCUniversal CEO Jeff Shell and NBCU News Group chairman Cesar Conde, the coalition of Hollywood heavyweights are asking for the Trump town hall to be shifted from its current 8pm time slot 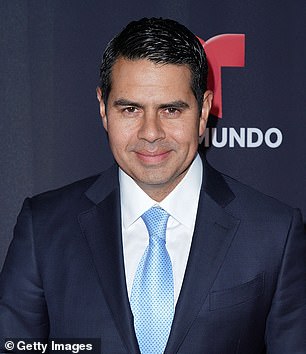 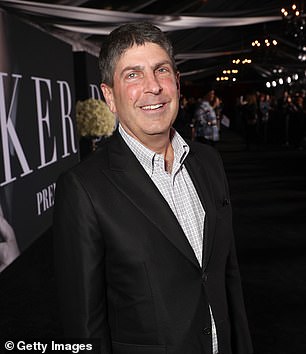 NBC News Chairman Cesar Conde (left) said in a statement that though ‘we share in the frustration’ over the scheduling clash, Trump’s town hall will still proceed as planned. NBCUniversal CEO Jeff Shell (right), meanwhile, told The Wrap her things it’s ‘fair’ to forge ahead with Donald Trump’s town hall this evening

The conflicting town hall broadcasts emerged after the Commission on Presidential Debates canceled the previously scheduled October 15 debate between Trump and Biden after the president tested positive for coronavirus.

The commission offered the hold the debate in a virtual capacity, but the motion was refused by Trump who called the suggestion a ‘waste’ of his time.

ABC quickly slated a Joe Biden town hall in the same time slot as when the virtual debate would’ve been held.

Following lengthy negotiations, NBC, which made Trump a household name with its series The Apprentice, booked him for a town hall airing at exactly the same time, a scheduling decision that has drawn wide criticism.

In the Thursday letter, the coalition of entertainers and executives said their critique is not the result of a ‘partisan issue. This is about the political health of our democracy,’ they wrote.

‘We believe this kind of indifference to the norms and rules of our democracy are what have brought our country to this perilous state,’ the letter said.

‘We are simply asking that NBC air the President’s town hall either before or after Vice President Biden’s so that American voters can have the opportunity to watch both,’ the note continued.

‘We understand the necessities of business, especially in this difficult time. But we believe there are larger issues of civic responsibility at stake here.’

Among those leading the charge was Dan Fogelman, the mind behind NBC’s smash-hit series This Is Us, with cast members Sterling K. Brown, Mandy Moore and Milo Ventimiglia also named among the signees.

A number of other prominent current and former NBCUniversal stars and producers are also named among the 105 co-signers of the letter, including Law & Order: Special Victims Unit Executive Producer Neal Baer.

Other big names include producer Ryan Murphy, who created The New Normal, in addition to actor-producer Ben Stiller as well as Family Guy creator Seth Macfarlane, who recently signed a $200m production deal with NBCU. 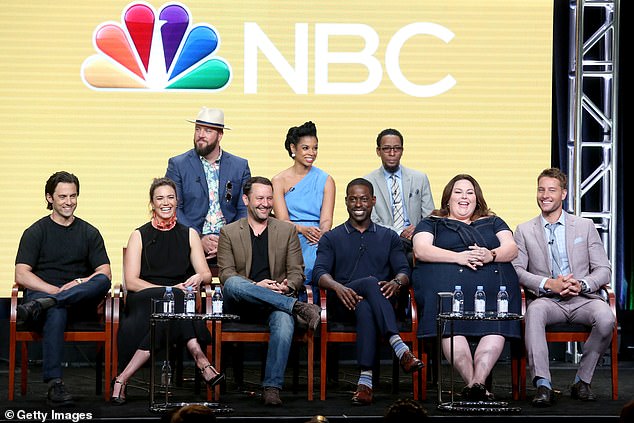 A spokesperson for NBC News told the Wall Street Journal the decision to air Trump’s town hall at 8pm was because it was the same time-slot as the slated virtual debate and it wanted to keep the playing field level for the two candidates.

In a separate statement, a company spokesperson told The Wrap that the network did not discuss moving the time slot with the Trump campaign, after they learned that the Biden town hall on ABC was scheduled to air at the same time and attributed the roaring backlash to ‘peoples’ understandable frustration with the president.’

In addition to the open letter, producers and on-air talent at the company’s MSNBC news network have also voiced their disappointment over its sister network’s decision, causing inner turmoil according to the WSJ.

MSNBC, which is famed for its left-leaning prime time commentators such as Rachel Maddow and Lawrence O’Donnell, will also be broadcasting Trump’s town hall.

Maddow asked Kamala Harris on air Wednesday night if she was ‘as mad as everybody else’ at NBC News.

A former top executive speaking on the grounds of anonymity also disputed NBC’s decision to pushforward with Trump’s event, insisting ‘it’s got to be country before network.’

‘This his isn’t some soap opera ratings stunt,’ the former executive blasted. 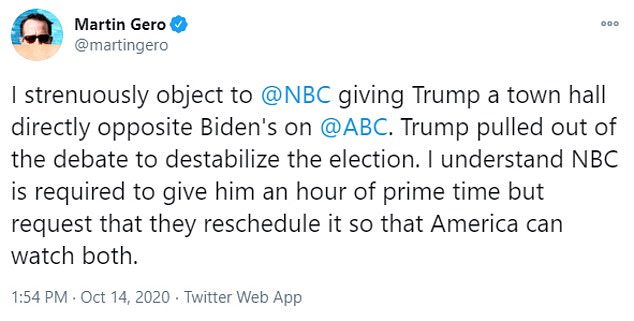 Savannah Guthrie, who is set to moderate the Trump town hall, is also upset with the decision.

A source told The Wrap she is ‘p***ed over the decision’, but plans to ‘suck it up and do her job’.

‘Savannah is the best griller and interviewer there is, this won’t be a walk in the park for Trump,’ the source continued.

A number of NBCU talent also took to Twitter when NBC announced the Donald Trump town hall to object to its scheduling.

‘I strenuously object to @NBC giving Trump a town hall directly opposite Biden’s on @ABC,’ Martin Gero tweeted. ‘Trump pulled out of the debate to destabilize the election. I understand NBC is required to give him an hour of prime time but request that they reschedule it so that America can watch both.’

Paul Feig concurred: ‘We have a show with @NBC & they have been very generous & supportive of us but giving Trump a platform against his opponent on the night of the canceled debate when Trump was the one who pulled out is really effed up. They should at least fill the town hall with Biden supporters.’

An NBC News spokesman declined to comment on any tensions with MSNBC when approached by the WSJ.

We are a group of writers, actors, directors and producers. Many of us have been lucky enough to work for NBCUniversal at some point in our careers. Some of us are currently employed at your studio. We have always thought of NBCUniversal as both a terrific creative home and a brand that stands for the best in entertainment and broadcast journalism.

This is why we have been devastated to learn that you have chosen to air President Trump’s town hall this Thursday night at 8 p.m., directly opposite Vice President Biden’s town hall.

This is not a partisan issue. This is about the political health of our democracy.

We believe this kind of indifference to the norms and rules of our democracy are what have brought our country to this perilous state.

We are simply asking that NBC air the President’s town hall either before or after Vice President Biden’s so that American voters can have the opportunity to watch both.

We understand the necessities of business, especially in this difficult time. But we believe there are larger issues of civic responsibility at stake here.

Sen. Collins' Democratic rival portrays her in debate as in pocket of Trump, McConnell

England’s Morgan takes over as Kolkata captain in IPL