New York City Mayor Bill de Blasio has denied that an NYPD top commander resigned because of a rift with him after he was accused of meddling in the police department’s chain of command.

Chief of Patrol Fausto Pichardo abruptly gave notice on Tuesday that he is retiring less than a year after taking the job.

Sources had claimed Pichardo’s sudden exit, after months of dealing with street protests and the coronavirus pandemic, was borne out of frustration with de Blasio that boiled over last week.

De Blasio, who was asked to address the claims during his daily press briefing on Wednesday, said Pichardo had resigned for personal reasons. 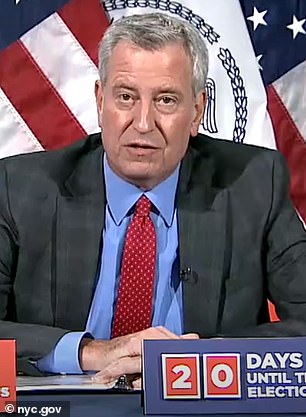 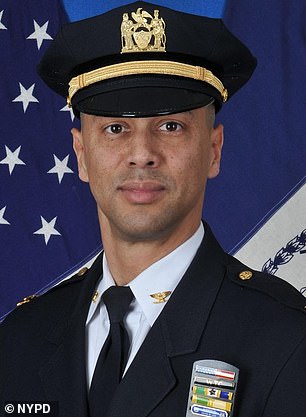 The Mayor said he has spoke to Pichardo several times on Tuesday night and again Wednesday morning.

‘(It was) very clear from those conversations this was a personal decision,’ de Blasio said.

‘A decision based on personal and family factors. He’s a very devoted family man. This was something that he felt was important to do for his own family.’

At one point, de Blasio praised Pichardo saying: ‘I think Chief Fausto Pichardo has done a fantastic job and I’ve felt that throughout. I’ve said it many times.

‘We have rarely disagreed in these months working very closey together in very, very tough times. He’s someone I hold in high regard.

‘We all tried to see if there was a way to convince him to stay but it was a personal decision.’

It comes after a police source claimed Pichardo felt de Blasio and his staff were meddling in police work and ignoring the department’s chain of command by communicating with him directly instead of through the police commissioner.

‘I have a close working relationship with a lot of the key leaders of the police deptartment. We’ve been working shoulder to shoulder through so much. It’s ensemble of leaders, I’ve worked with all of them closely.

‘I think, honestly, the information put out there isn’t accurate.’ 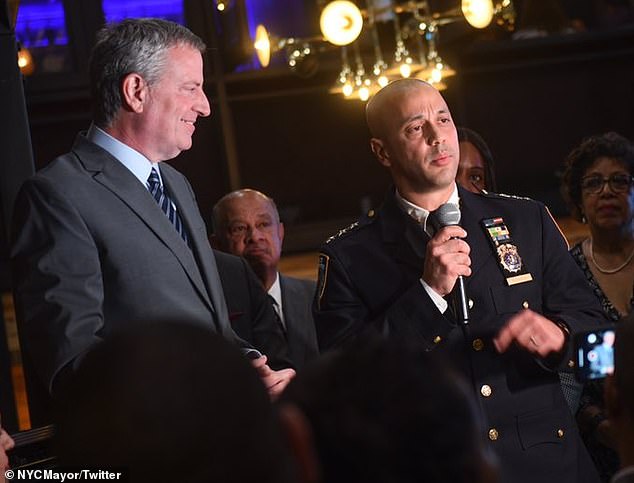 De Blasio, who was asked to address the claims during his daily press briefing on Wednesday, said Pichardo had resigned for personal reasons. They are pictured together in January this year 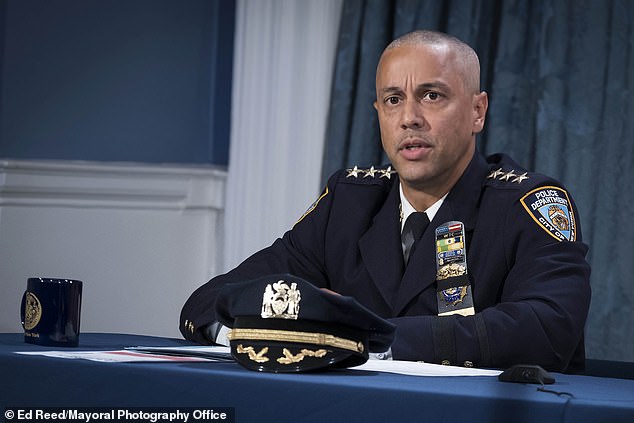 Sources say the issue between de Blasio and Pichardo came to a head last week after Pichardo was summoned to City Hall and reprimanded for not answering a call from the Mayor the night before.

Pichardo said he initially missed de Blasio’s call because of a problem with his phone. The next day, de Blasio contacted Pichardo directly again with concerns that a house party in the Bronx was violating social distancing restrictions.

He filed retirement paperwork on Tuesday, the NYPD said in a written statement.

The department said would stay on the job until mid-November.

De Blasio’s press secretary, Bill Neidhardt, would not address the alleged dispute on Tuesday, only saying: ‘Chief of Patrol Pichardo is a deeply respected leader in the NYPD and City Hall is continuing to have conversations with him regarding his future.’

Pichardo became the first person of Dominican heritage to hold the role after being appointed chief of patrol in December.

He was seen within the NYPD as a prime candidate to someday become chief of department, the highest-ranking position other than police commissioner.

The NYPD described Pichardo in its statement as ‘one of the most highly respected leaders in policing’ and said he had ‘worked tirelessly in recent months to guide the men and women in uniform through a series of challenging issues that have strained the city and the agency.’

At the time, de Blasio praised Pichardo, saying: ‘He’s done extraordinary work in his role as Chief of Patrol and he is someone who really understands our communities and listens to our communities.’

CNN breaks down the biggest moments from the debate

US Presidential Debate: Biden FIRST to interrupt, over China claims

With time running out, Trump again forced to defend coronavirus approach at debate

Live fact-checking of the final debate between Trump and Biden