The final horn of NHL’s tumultuous 2019-2020 season sounded Monday night in Edmonton, simultaneously igniting celebrations on the ice, where the Tampa Bay Lightning secured their second Stanley Cup title at an empty arena, and in downtown Tampa, where masked fans gathered to watch the dramatic 2-0 Game 6 win over the Dallas Stars.

Social distancing was put on hold in both cities while players and euphoric Lightning fans rejoiced at the culmination of a season that began nearly one year earlier.

Since then, the season was suspended on March 11 as coronavirus swept across North American, leading players and owners to establish testing protocols and a plan to return to play with the creation of league bubbles in Edmonton and Toronto.

And aside from the empty arenas and fake crowd noise, the final 65 days of the campaign was nonetheless a fitting ending. Lightning players still rushed the ice for the traditional player pile, followed by the customary on-ice parade with teammates taking turns lifting the Cup, albeit without their adoring fans cheering back at them. 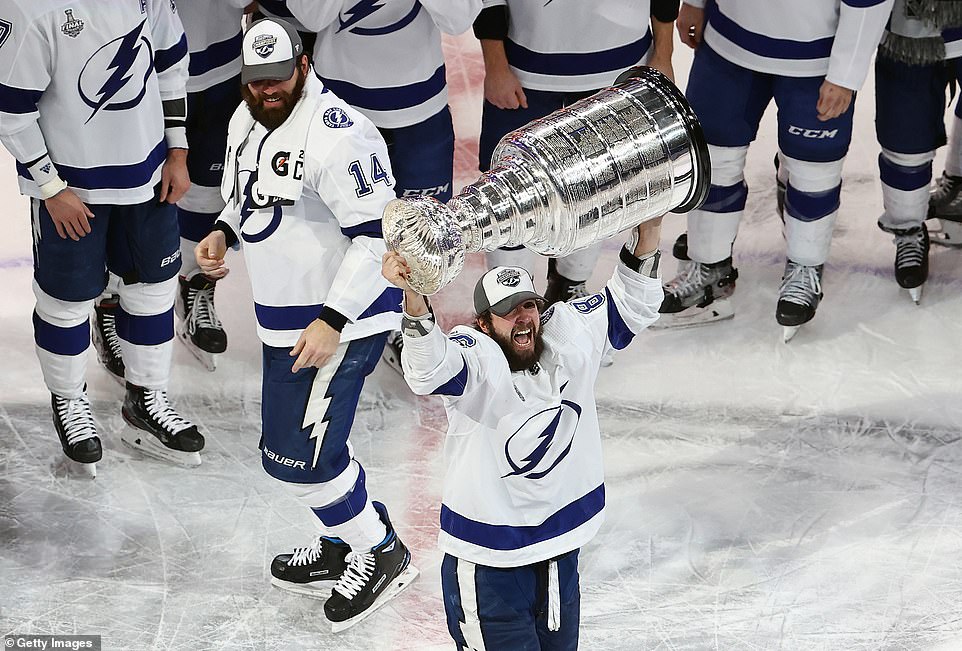 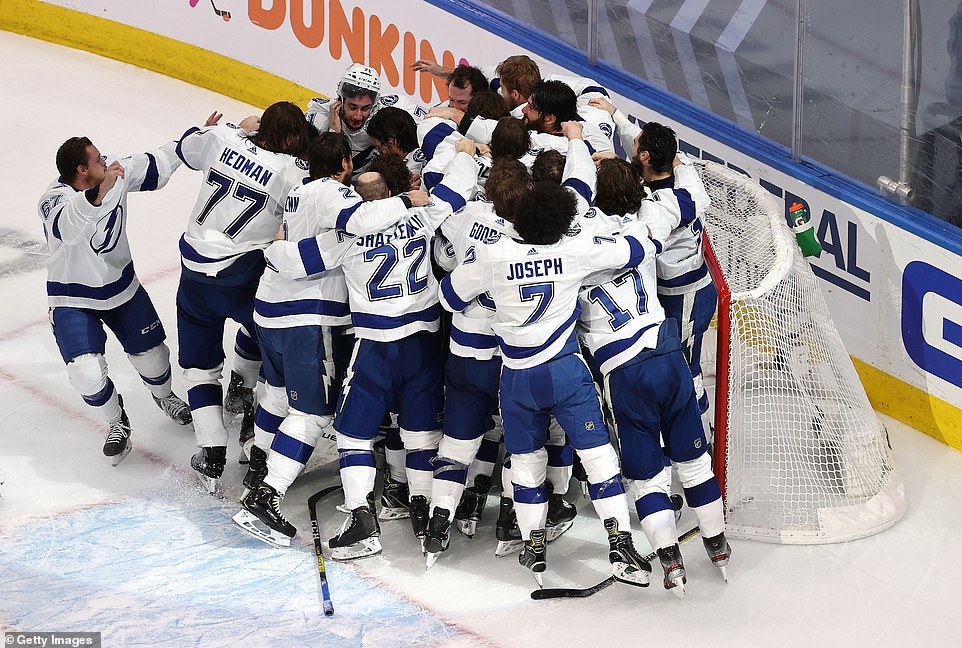 The Tampa Bay Lightning celebrate following the series-winning 2-0 victory over the Dallas Stars in Game Six of the 2020 NHL Stanley Cup Final at Rogers Place on September 28 in Edmonton, Alberta 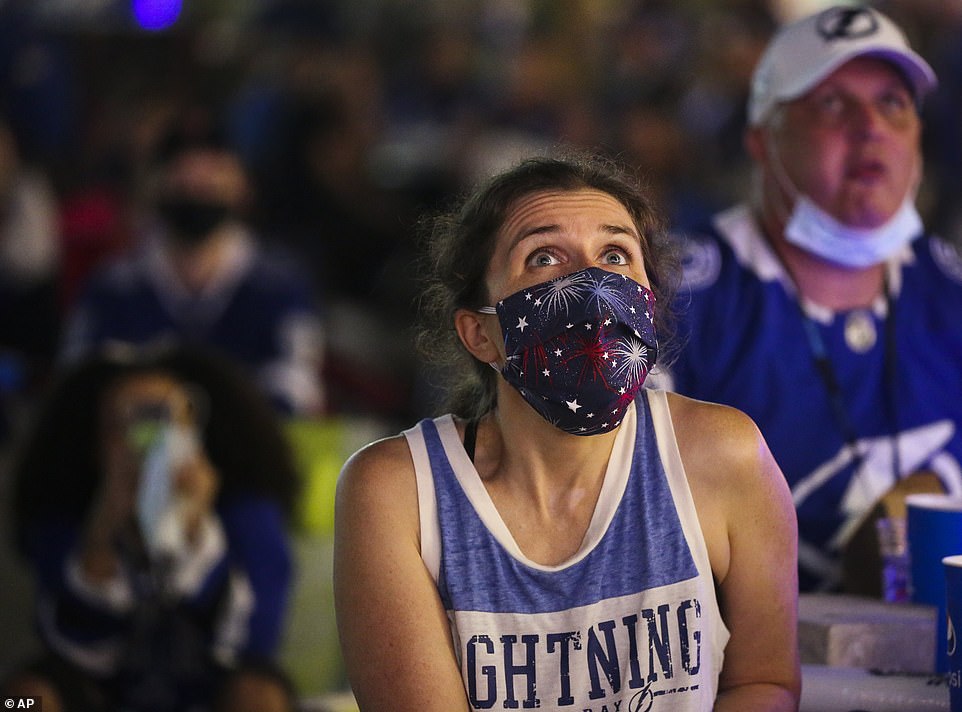 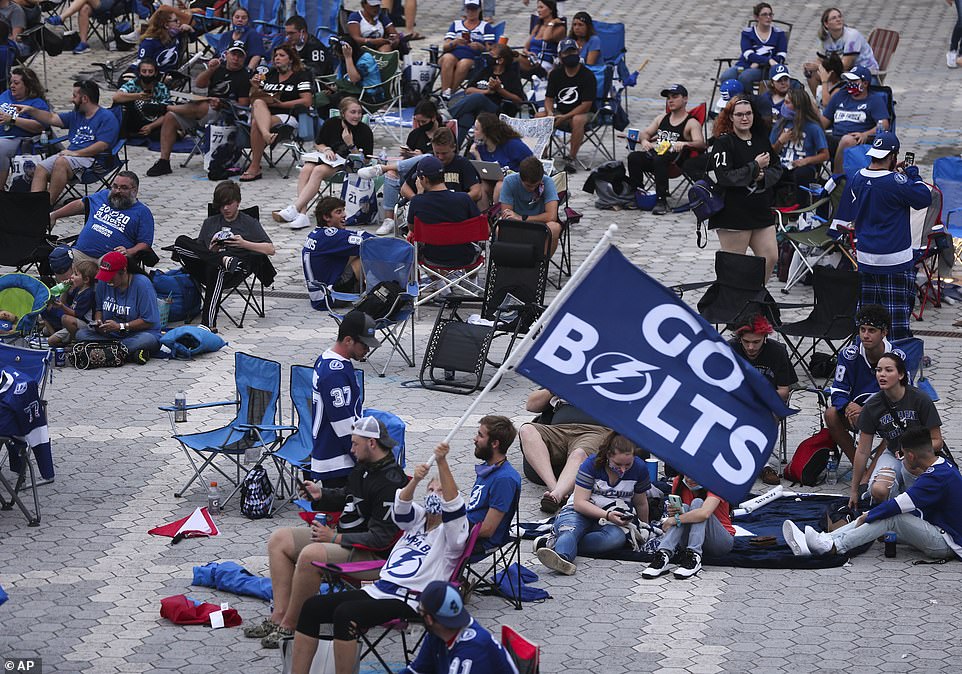 Julie Paine, front center, waves her ‘Go Bolts’ flag as fans gather on Thunder Alley at Amalie Arena before watching as the Tampa Bay Lightning take on the Dallas Stars in an NHL Stanley Cup finals hockey game is aired live outside the arena 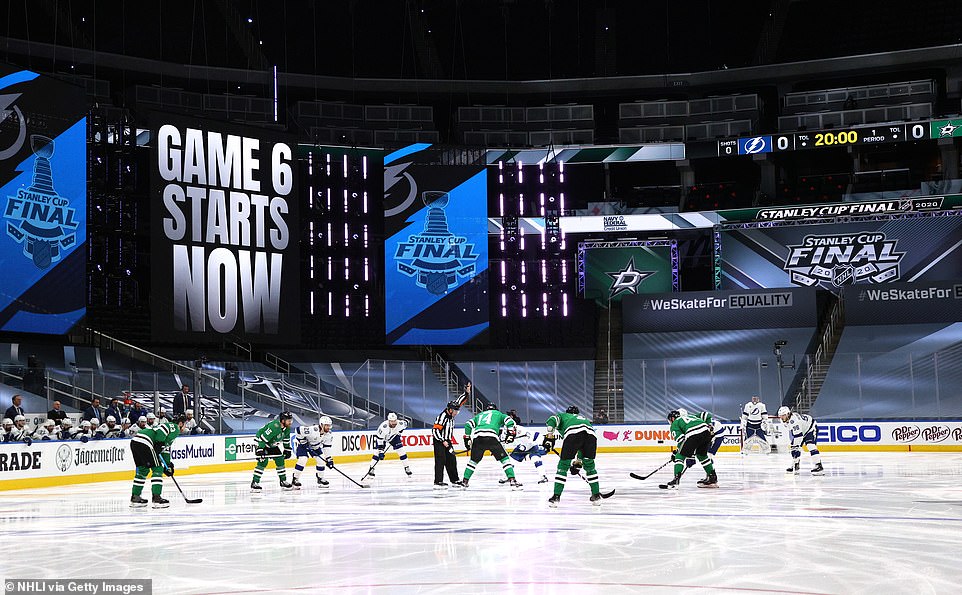 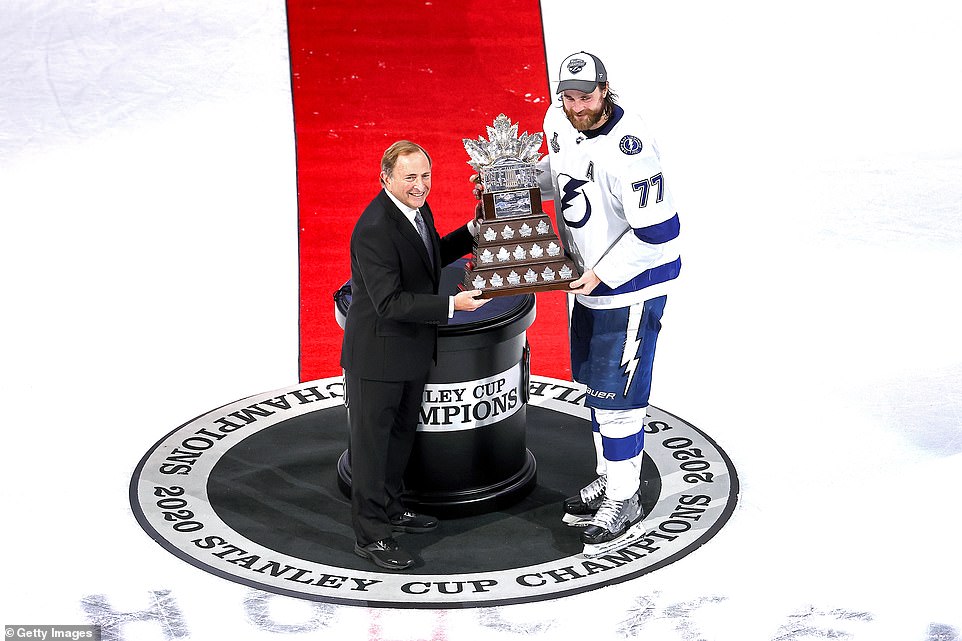 Goals from Brayden Point and Blake Coleman and a 22-save shutout by Andrei Vasilevskiy in Game 6 were enough to power the Lightning to their second championship after winning it in 2004. That also came with the league on the verge of a labor stoppage, a lockout that wiped out an entire season, and similar uncertainty hangs in the air now because of the coronavirus.

Tampa Bay’s core group closed out the final with an almost poetic display of what got the Lightning to this point over the past several years and months. Their new star in Point scored a power-play goal in the first period with assists from longtime standouts Nikita Kucherov and Victor Hedman, key addition Coleman killed a penalty and scored on an odd-man rush in the second, and Vasilevskiy did his job on a relatively slow night in net.

It was more of a coronation than a challenge as the dominant Lightning outshot the Stars 29-22 and looked like the powerhouse they’ve been for much of the past decade.

‘That last period was probably the longest period of my life,’ Hedman said. ‘I’m at a loss for words. You obviously wish your family and fans could be here, but we felt the support from back home.’

Even with Nikita Kucherov and Point filling the scoresheet, it was impossible to overstate Hedman’s value to Tampa Bay offensively, defensively and in the leadership department in the absence of injured captain Steven Stamkos. 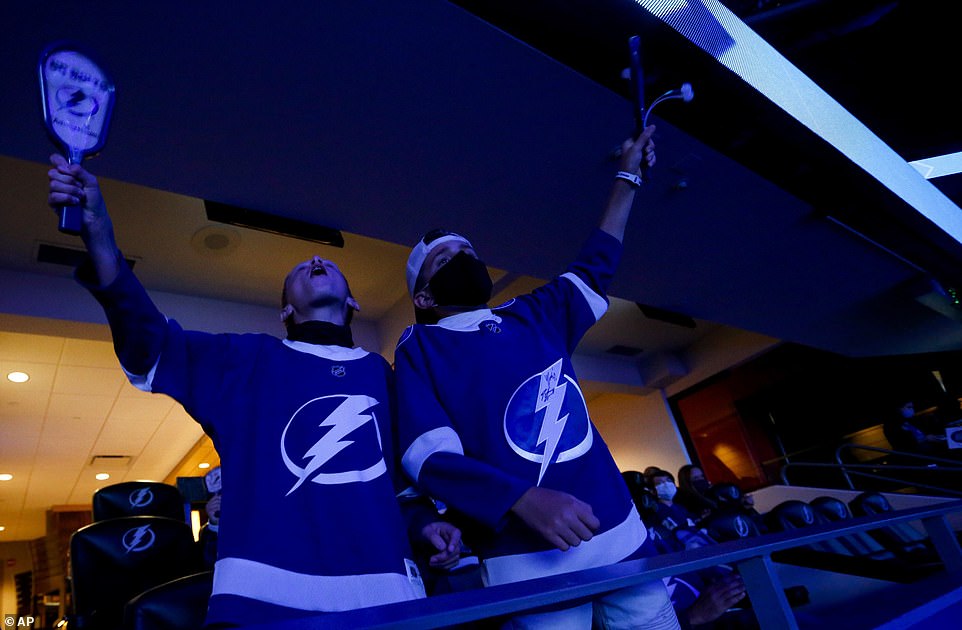 Questions about the future were put off for the celebration – by the Lightning and the NHL. Getting this done was a triumph of sorts, financial woes notwithstanding. The NHL is the first of the four major North American professional sports leagues to crown a champion since the start of the pandemic.

Commissioner Gary Bettman was on hand to present the Lightning with the Stanley Cup exactly 200 days after his dismal, if hopeful, announcement that the season was being put on pause with 189 games left unplayed.

The league and players’ union worked for nearly four months to iron out where, how and when to play so 2020 wouldn’t join 1919 and 2004 as a year in which the Cup wasn’t awarded. The plan they came up with was unusual. Like the NBA, it called for walling off teams from the public for months on end. Unlike the NBA, it called for doing it in two spots – Toronto and Edmonton, while the U.S. grappled with spiking coronavirus cases in too many places for NHL leadership to feel comfortable.

And it worked. After more than 31,000 tests, there were zero positive coronavirus cases reported among players, coaches and staff inside the bubbles and just a handful among hotel, arena or restaurant employees. There was nothing close to a breakout.

Bizarre as it was with no fans and manufactured crowd noise and light shows, the hockey was often top notch. The expanded, 24-team playoffs meant there was hockey nearly every day, sometimes from midday until past midnight, including a five-overtime marathon that was the second longest in modern hockey history. And in this unprecedented postseason, there were even two elimination games on the same day in the same arena.

By the conference finals, Rogers Place, a nearby JW Marriott and the rest of a heavily fenced bubble in downtown Edmonton became the center of hockey for fans thousands of miles away with Dallas and Tampa Bay, two of the southernmost teams in the league, settling the Cup in the NHL´s northernmost arena. 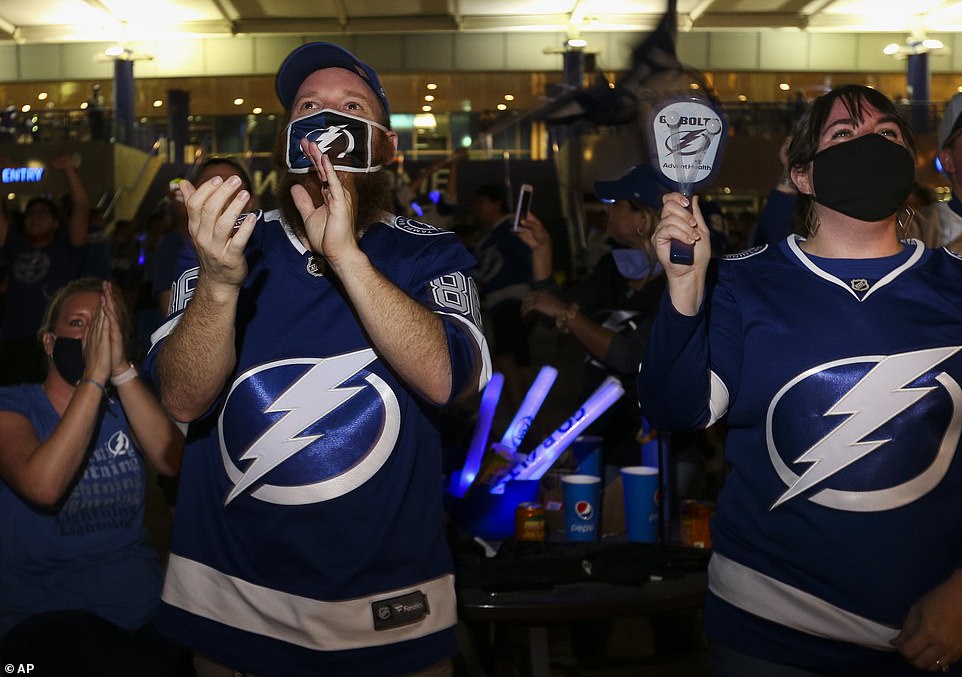 In all, the NHL played 130 games in a bubble, 25 of them going into overtime, before the final horn set off a celebration by Tampa Bay that simply had to do with no fans in the stands, and few loved ones allowed on the ice to share the moment.

The league and Players’ Association will meet within the next two weeks to discuss the many possibilities of what the 2020-21 season could look like, but there’s no desire to stage it entirely within quarantined bubbles.

‘Certainly not for a season, of course not,’ NHLPA executive director Don Fehr told The Associated Press on Sunday. ‘Nobody is going to do that for four months or six months or something like that. Whether we could create some protected environments that people would be tested and they’d be clean when they came in and lasted for some substantially shorter period of time with people cycling in and out is one of the things I suspect we will examine.’

In the coming days, the two sides will talk about when next season might start, how many games might be possible, what testing and protocols might be required and whether fans might be allowed into buildings at some capacity at some point.

A week after Commissioner Gary Bettman said a mid-to-late December or January start was possible, Fehr agreed that the tentative Dec. 1 opening night target date was the ‘earliest conceivable date’ the season could start and there’s good reason to believe it’ll be later.

The NHLPA is in the process of finalizing a committee to start answering the myriad of questions hockey faces in trying to get another season going. And while that and negotiations will begin quickly, the league and players are on the same page, that just like the return to play plan, they want to take time to get this right.

‘Nobody is going to rush it,’ Fehr said. 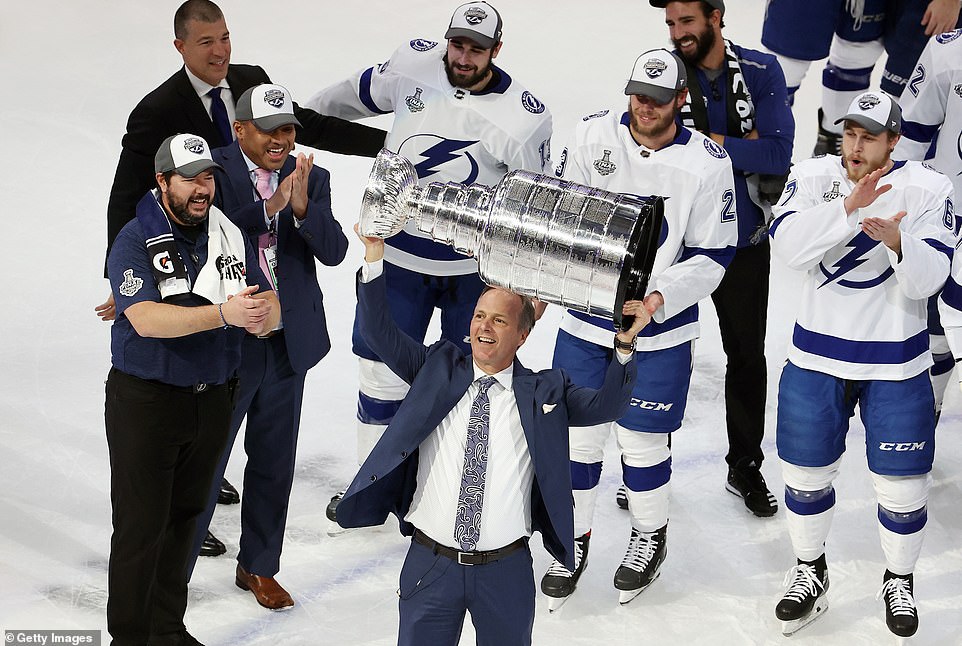 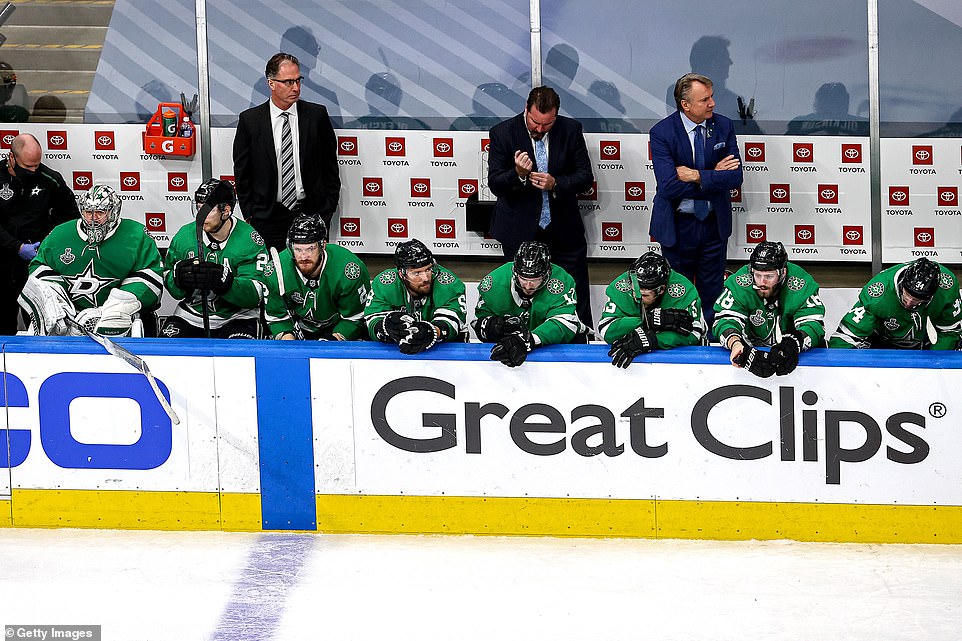 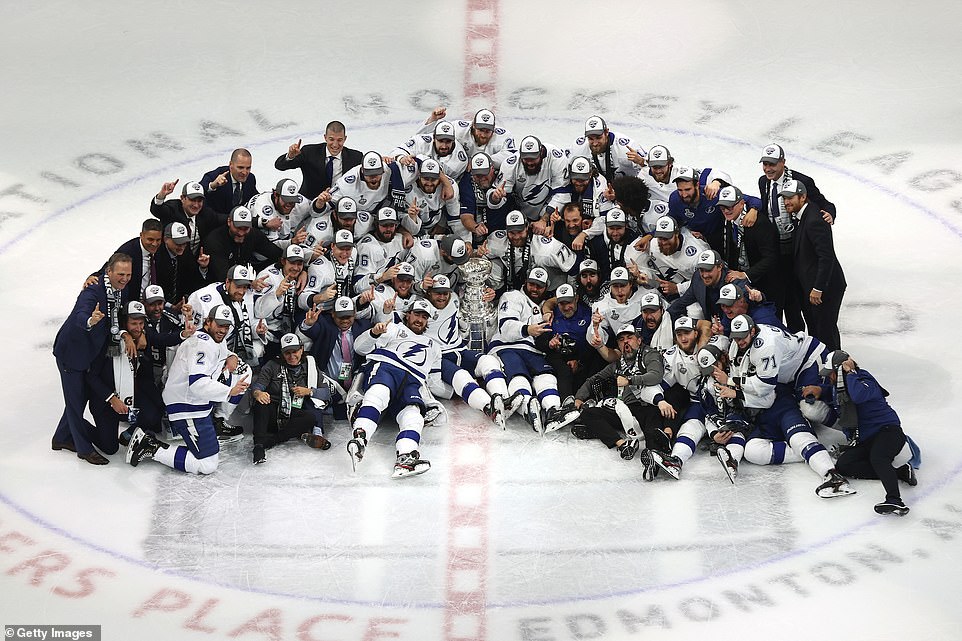 It helps the NHL has some time and an opportunity to monitor the NFL, Major League Baseball and college athletics for what’s working and not working in those sports.

But the NHL is the most dependent on attendance, which Bettman said affects at least 50 percent of revenues. It needs fans, but might not be able to get them in all 31 buildings.

‘On whatever basis we may or may not be able to have fans in our buildings is something that may be well beyond our control in terms of local government regulations that will determine how much the shortfall is off of where we were and off of where we were projecting,’ Bettman said September 19.

The league and players negotiated a long-term extension of the collective bargaining agreement knowing projections for at least next season would be much different given the global pandemic. If each team can’t play 82 games with some fans at some point, everyone is likely to take an even bigger financial hit than expected, which could affect player salaries.

‘Players are adults. They understand,’ Fehr said. ‘They may not like it. They may grumble, and they may wish it was different. I’m sure owners do. I’m sure fans do. I’m sure everybody does. Nobody likes what we’re living through. But you don’t gain anything by sugar coating or being less blunt than otherwise would be the case.’

Players leaving the playoff bubble were blunt that they don’t want to go through that kind of extended isolation again. Vegas forward Max Pacioretty was among them, saying, ‘I hope we don’t have to do that again.’

‘I hope the world takes a turn for the better here and hopefully get some normalcy back,’ Pacioretty said.

With a true return to normalcy a long time away, everyone may have to make some sacrifices to get back on the ice. The Canadian border plays a factor and might require a rejiggered schedule with shorter or limited travel, like baseball did with its 60-game season.

The NHL could get to 60 games and hand out the Stanley Cup before the planned start of the now 2021 Tokyo Olympics. NBC is the NHL’s US TV rightsholder and also airs the Olympics. Of course, it’s conceivable there’s no season because owners would lose tens of millions of dollars without fans, but Fehr doesn’t believe that’s likely.

‘In this world we live in, I think anything is possible, but I think it’s pretty remote,’ he said. ‘What we have to do is basically proceed on the assumption that there will be a season, that we can figure out how to do it and how do we do it in a way which provides the requisite health and safety for players and staff and broadcasters and (reporters) and the fans once we can get them back in the arenas, but at the same time has some integrity. That’ll be the task.’ 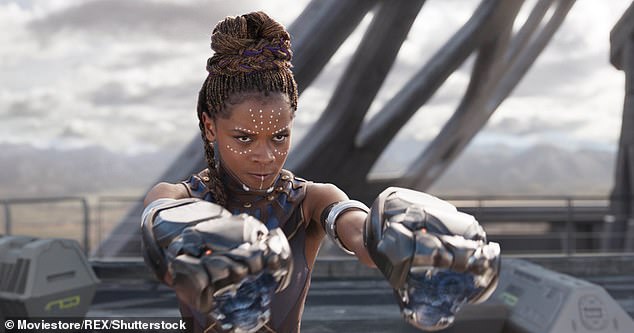 ‘I would never defend anybody posting this’: Black Panther’s Letitia Wright is slammed by Marvel co-star Don Cheadle for posting COVID anti-vax […] 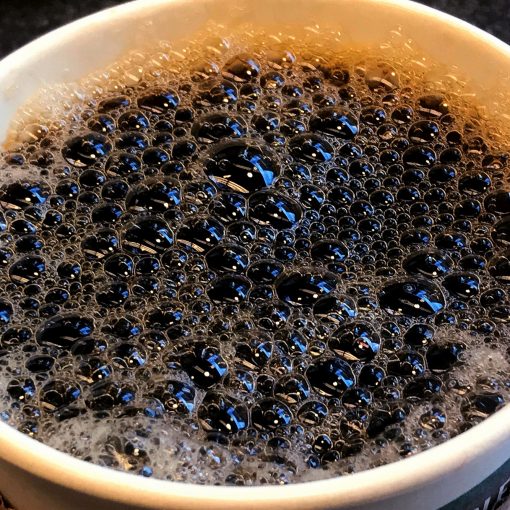 NEW YORK – Fewer people drank coffee in the United States during the pandemic compared to levels seen before it, although the […] 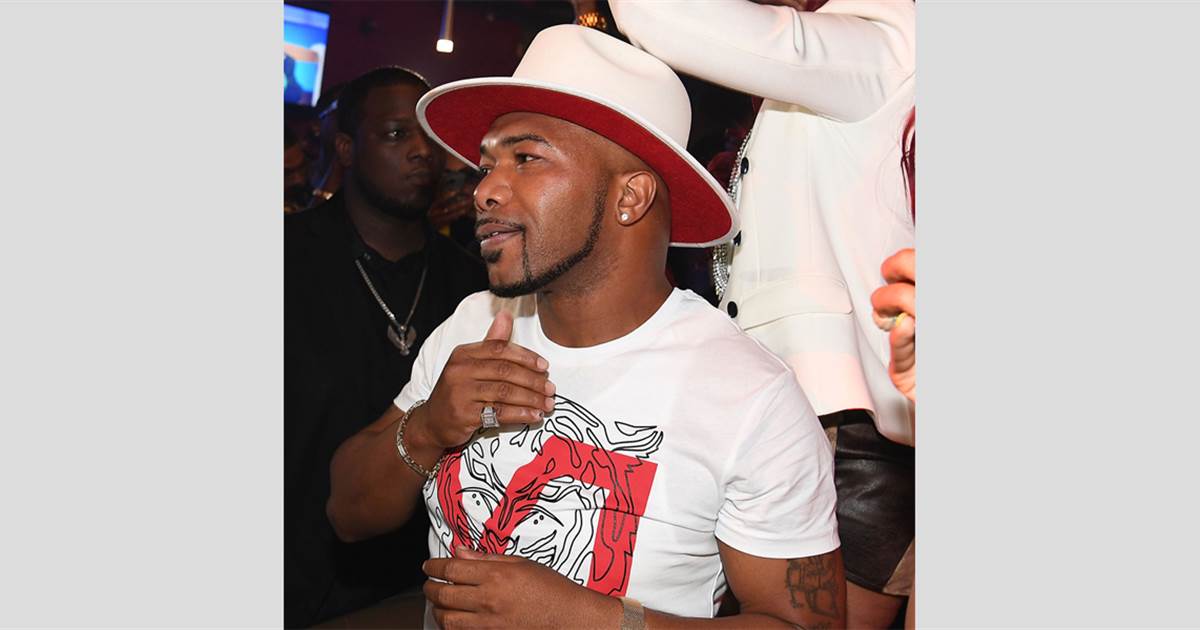 A Georgia man who has appeared in the reality TV series “Love & Hip Hop: Atlanta” is accused of securing a loan […] 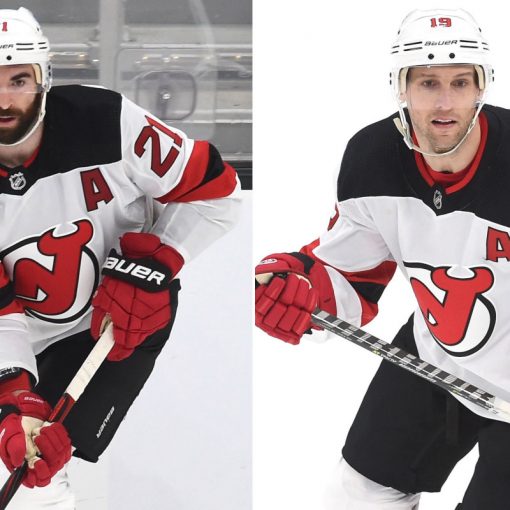 Islanders general manager Lou Lamoriello made a deal with the Devils on Wednesday, acquiring forwards Kyle Palmieri and Travis Zajac from his […]