Ivanka Trump appears to have been paid hundreds of thousands of dollars in ‘consulting fees’ that helped reduce her father’s tax bills while she was working as an employee of the Trump Organization.

President Donald Trump’s eldest daughter, who used to work as a top executive at the Trump Organization, appears to have been the recipient of some of the unexplained consulting fees set aside for his real estate deals and projects.

The tax records show that Trump was able to partly reduce his tax bills between 2010 and 2018 by writing off about $26 million in consulting fees.

A payment of $747,622 to an unnamed Trump Organization consultant is the exact amount Ivanka declared in her own public disclosure filings when she joined the White House as an adviser in 2017.

She listed that payment as one from a consulting firm she co-owns.

A lawyer for the Trump Organization would not comment when asked about the consulting payments to Ivanka. 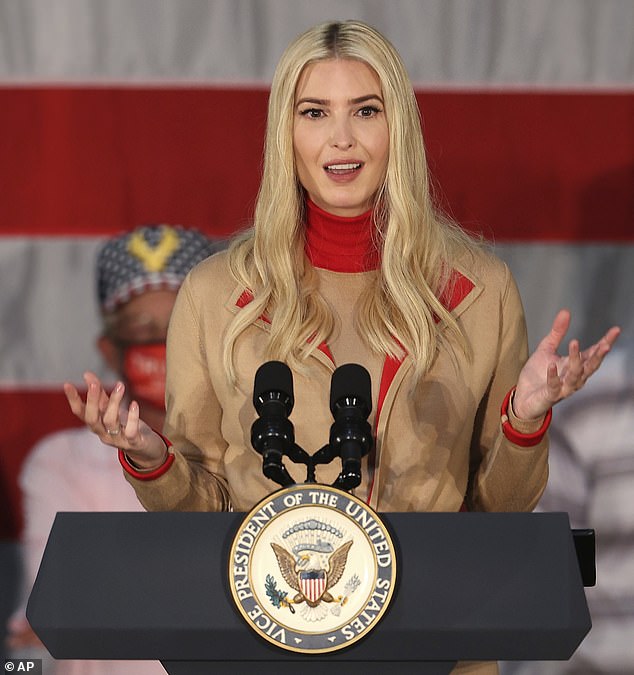 President Donald Trump’s eldest daughter, who used to work as a top executive at the Trump Organization, appears to have been the recipient of some of the unexplained consulting fees set aside for his real estate deals and projects

Companies can claim consulting fees as a business expense for tax purposes.

In Trump’s case, his businesses set aide about 20 percent of income for these unexplained consulting fees since 2010, according to the tax data.

The Times reports that, in some cases, Trump appears to have treated his daughter Ivanka as a consultant and then deducted the fees as a business expense in his tax filings.

While the consultants are not named in Trump’s private tax records, the filings show his company once paid $747,622 to a consultant for hotel projects in Hawaii and Vancouver in Canada.

In Ivanka’s own public disclosure forms that were filed when she joined the White House staff in 2017, the First Daughter reported receiving payments from a consulting firm she co-owned.

The sum she reported was an exact match to the consulting fees paid out by the Trump Organization for the hotel projects.

It suggests that Ivanka was being used as a consultant on the same hotel deals that she helped manage as part of her executive role at the Trump Organization, according to the Times.

The Times said people with knowledge of some of Trump’s projects where large fees were paid out had no knowledge of outside consultants that would have need to be compensated.

In Ivanka’s public filings, she indicated the $747,622 fees she received was paid to her through TT Consulting L.L.C. – a firm that she said provides consulting, licensing and management services for real estate projects.

The firm was incorporated in Delaware in 2005 and is a Trump-related entity.

Prior to joining the White House, Ivanka – as well as her two brothers Eric and Don Jr. – was a longtime employee of her father’s business and received a salary from the Trump Organization. 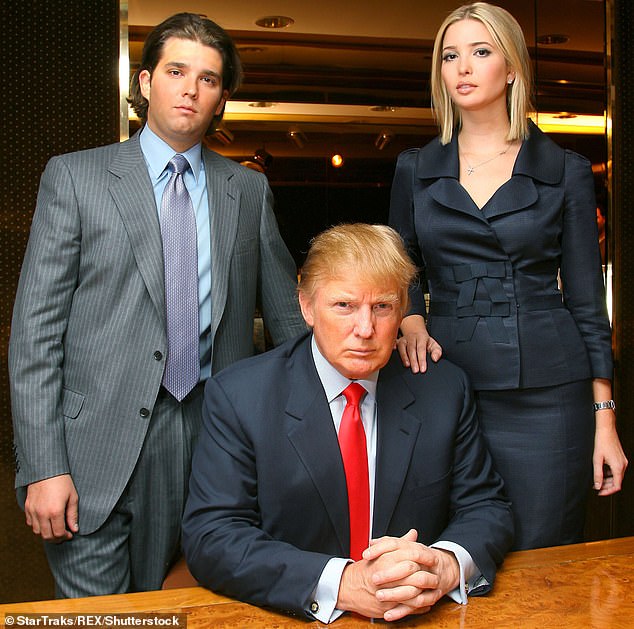 While the consultants are not named in Trump’s private tax records, the filings show his company once paid $747,622 to a consultant for hotel projects in Hawaii and Vancouver in Canada. The fee matches one declared by Ivanka in her public disclosure forms that were filed when she joined the White House staff in 2017 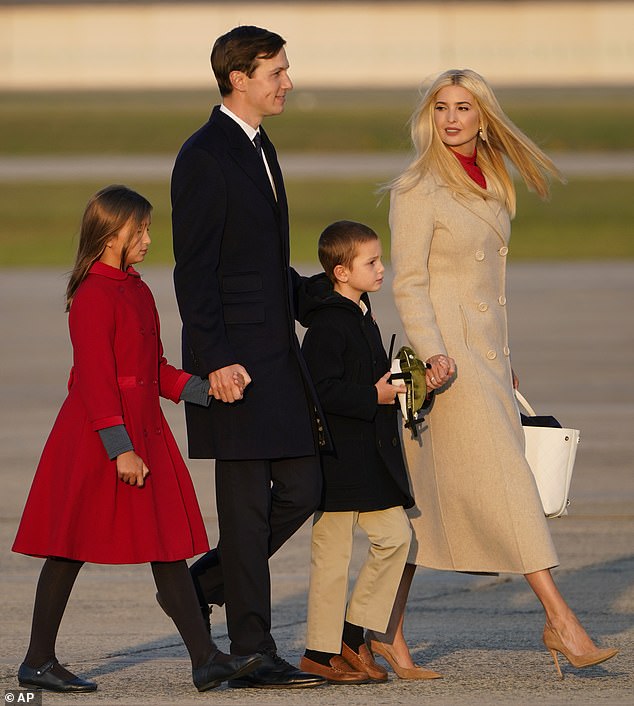 It was revealed last month that Ivanka and her husband Jared Kushner (pictured with two of their three children last week) made somewhere between $36.2 million and $157 million in 2019, according to financial disclosure records

On her website, which is now non-existent, Ivanka did not describe herself as a consultant for the Trump Organization. She referred to herself as a senior executive who was involved in all aspects of Trump projects.

It was revealed last month that Ivanka and her husband Jared Kushner made somewhere between $36.2 million and $157 million in 2019, according to financial disclosure records.

In another part of Trump’s tax filings, it was revealed that at least $95,464 in payments to Ivanka’s favorite hair and makeup artist had been written off as expenses.

Her father on Sunday dismissed the report as ‘fake news’ after it was revealed that he paid no income tax for 11 years, just $750 in 2016 and 2017 and reported huge losses across his business empire.

Her father on Sunday dismissed the report as ‘fake news’ after it was revealed that he paid no income tax for 11 years, just $750 in 2016 and 2017 and reported huge losses across his business empire

In a statement to the Times, a lawyer for the Trump Organization said Trump had paid millions of dollars in personal taxes over the last decade, without weighing in on the specific finding of minimal income taxes.

Documents show the president paid no income tax in 11 of the 18 years studied, according to a report by the paper.

He was able to minimize his tax bill by reporting heavy losses across his business empire, including at his golf courses.

That’s despite receiving $427.4 million through 2018 from his reality television program and other endorsement deals. The president could also face mounting financial pressure in the years ahead. The tax records show he’s carrying a total of $421 million in loans and debt that are primarily due within four years.

The president, who campaigned for office as a billionaire real estate mogul and successful businessman, said he has paid taxes, though he gave no specifics.

Trump has previously blasted the long-running quest for his financial records as a ‘continuation of the most disgusting witch hunt in the history of our country’.

The businessman is the only modern president who has refused to release his tax returns.

Before he was elected, he had promised to do so.

Trump’s lawyer Alan Garten, said that ‘most, if not all, of the facts appear to be inaccurate’.

KEY FINDINGS FROM THE REPORT ON TRUMP’S TAX RETURNS

The newspaper said Trump initially paid $95 million in taxes over the 18 years it studied. But he managed to recover most of that money by claiming — and receiving — a stunning $72.9 million federal tax refund.

According to the Times, Trump also pocketed $21.2 million in state and local refunds, which are typically based on federal filings.

Trump’s outsize refund became the subject of a now-long-standing Internal Revenue Service audit of his finances. The audit was widely known. Trump has claimed it was the very reason why he cannot release his returns. But the Times report is the first to identify the issue that was mainly in dispute.

As a result of the refund, Trump paid an average $1.4 million in federal taxes from 2000 to 2017, the Times reported. By contrast, the average U.S. taxpayer in the top .001% of earners paid about $25 million annually over the same time-frame.

From his homes, his aircraft — and $70,000 on hair styling during his television show ‘The Apprentice’ — Trump has capitalized on cost incurred from his businesses to finance a luxurious lifestyle.

MANY OF HIS BEST-KNOWN BUSINESSES ARE MONEY-LOSERS

The president has frequently pointed to his far-flung hotels, golf courses and resorts as evidence of his success as a developer and businessman. Yet these properties have been been draining money.

The Times reported that Trump has claimed $315 million in losses since 2000 on his golf courses, including the Trump National Doral near Miami, which Trump has portrayed as a crown jewel in his business empire. Likewise, his Trump International Hotel in Washington has lost $55 million, the Times reported.

Since Trump began his presidential run, lobbyists, foreign governments and politicians have lavished significant sums of money on his properties, a spending spree that raised questions about its propriety and legality.

The Times report illustrates just how much that spending has been: Since 2015, his Mar-a-Lago resort in Florida has taken in $5 million more a year from a surge in membership. The Billy Graham Evangelistic Association spent at least $397,602 in 2017 at Trump’s Washington hotel. Overseas projects have produced millions more for Trump — $3 million from the Philippines, $2.3 million from India and $1 million from Turkey.

TRUMP WILL FACE FINANCIAL PRESSURE AS DEBTS COME DUE

Trump seems sure to face heavy financial pressures from the enormous pile of debt he has absorbed. The Times said the president appears to be responsible for $421 million in loans, most of which will come due within four years. On top of that, a $100 million mortgage on Trump Tower in New York will come due in 2022.

Reporting by the Associated Press

Trump team just announced its surrender to the pandemic

Follow in the footsteps of Yu Gong and cross the Taihang mountain in Jiyuan- the 1st Conference of International Hiking across Magnificent Taihang 2020...

9 days to go: Biden's lead over Trump is holding, while Clinton's was collapsing at this point

‘We are waiting for the final ‘yes.” Where stimulus negotiations stand for a second check, unemployment aid