Coronavirus cases in the United States are currently averaging 40,000 per day as infections increase in 21 states and health experts warn Americans not to become complacent as the weather gets colder.

The average number of COVID-19 cases per day has hovered at the 40,000 mark for just over a week now.

There was an uptick in national infections in mid-September, which health experts have partly attributed to Labor Day weekend gatherings and the reopening of some schools.

Prior to the increase, cases had been trending downwards nationally since July when about 70,000 infections were being reported daily.

There were nearly 37,000 cases reported nationwide on Sunday.

Deaths also now appear to be plateauing nationally after declining steadily since mid-September. The average number of Americans dying per day is at just over 740, which is down from the peak 2,000 deaths being reported per day back in April.

The US recorded 266 deaths nationwide on Sunday. There is often a lag in weekend reporting, which accounts for low numbers at the beginning of each week. 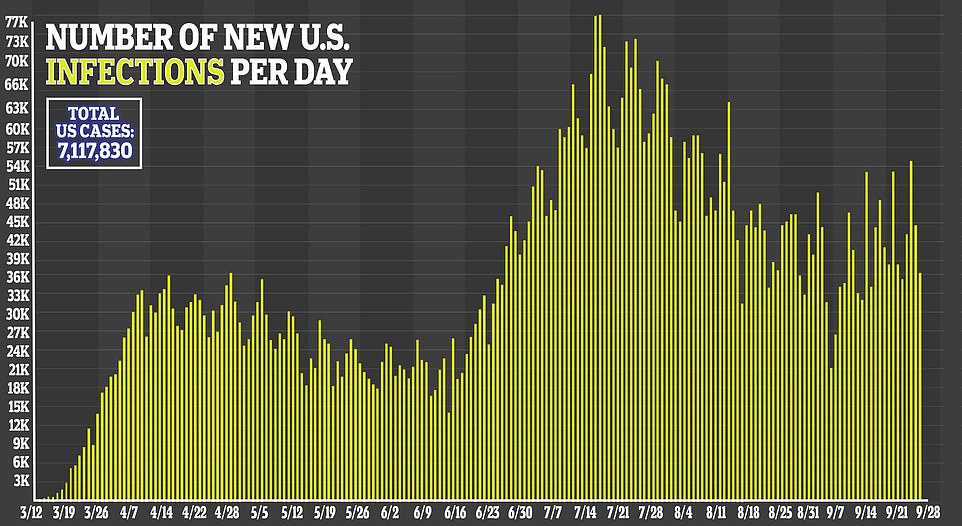 The average number of COVID-19 cases per day has hovered at the 40,000 mark for just over a week now. There were nearly 37,000 cases reported nationwide on Sunday

The average number of Americans dying per day is at just over 740. The US recorded 266 deaths nationwide on Sunday. There is often a lag in weekend reporting, which accounts for low numbers at the beginning of each week

Infections are currently rising in 21 states, most in the Midwest, and the number of tests coming back positive for COVID-19 is topping 25 percent in some of those states.

Eighteen states appear to be holding steady with COVID-19 cases and 11 – including Arizona, Louisiana, Tennessee, Georgia and Florida – have seen declines in the past week compared to the previous seven days.

North Dakota’s positive test rate has averaged 30 percent over the past seven days compared with the prior week, according to the analysis using testing data from The COVID Tracking Project.

The positivity rate has risen to 26 percent in South Dakota, up from 17 percent the previous week.

Minnesota and Montana are averaging 7 percent of tests coming back positive, but Montana’s positivity rate spiked on Sunday to 20 percent.

The World Health Organization considers rates above 5 percent concerning because it suggests there are more cases in the community that have not yet been uncovered.

Several states such as New York, Massachusetts, Vermont and Maine have positive test rates of around 1 percent. 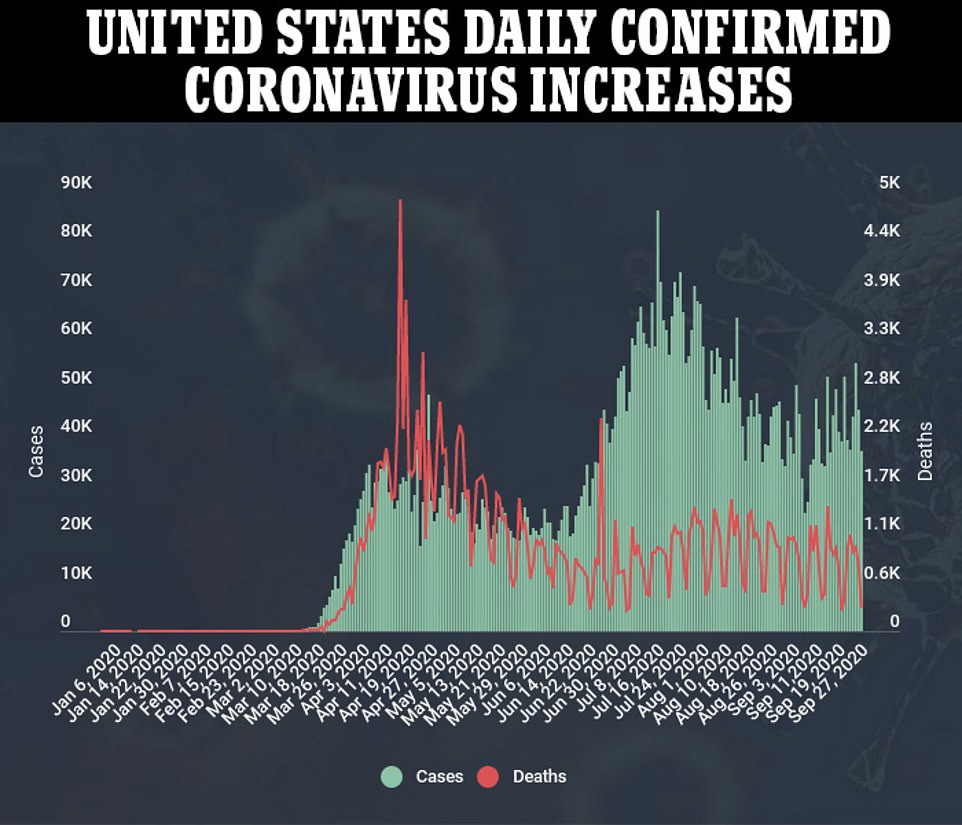 While a recent increase in testing might explain some of the increase in cases, hospitalizations have also surged in the Midwest and are not influenced by the number of tests performed.

Meanwhile, New York state’s COVID-19 infection rate has now risen to 1.5 percent on Monday – the highest it has been in months

More than 1,000 New Yorkers tested positive for COVID-19 in a single day on Saturday, marking the first time since June 5 the state has seen a daily number that high.

It prompted Gov Andrew Cuomo to warn New Yorkers not to get complacent about the virus.

‘It’s vital that New Yorkers continue to practice the basic behaviors that drive our ability to fight Covid-19 as we move into the fall and flu season,’ Cuomo said. ‘Wearing masks, socially distancing and washing hands make a critical difference, as does the deliberate enforcement of state guidance by local governments.’

The number of positive tests reported daily in the state has been steadily inching up in recent weeks, a trend possibly related to increasing numbers of businesses reopening, college campuses reopening and children returning to school.

The new positive-case number came out of nearly 100,000 tests, compared to about 60,000 tests daily in June. New York is in a far better situation than in April, when the number of positive tests per day routinely topped 9,000.

In New York City, health officials have sounded alarms about a rising number of cases in certain neighborhoods in Brooklyn and Queens where many private religious schools opened for in-person instruction in early September, warning that those communities could see severe restrictions on public gatherings reinstated if current trends continue. 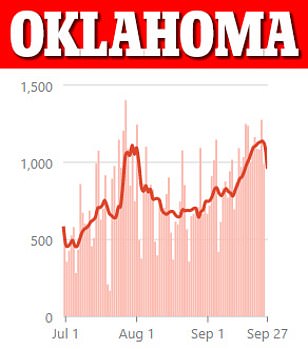 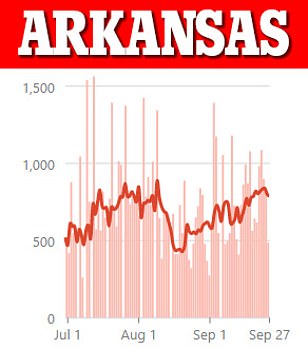 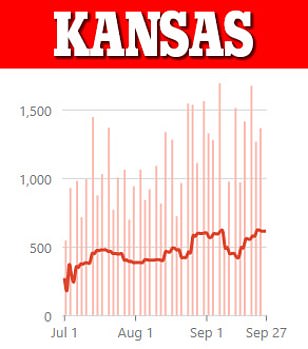 It comes as public health officials, including Dr Anthony Fauci, warned Americans not to become complacent as the colder weather kicks in.

He said the current average number of cases per day was concerning ahead the fall.

‘We’re not in a good place. As we get into the fall and the winter you really want the level of spread to be lower,’ he told Good Morning America.

He called Florida’s reopening of bars and restaurants at full capacity over the weekend ‘very concerning’.

‘Well that is very concerning to me, I mean, we have always said that, myself and Dr Deborah Birx, who is the coordinator of the task force, that that is something we really need to be careful about,’ he said.

‘When you’re dealing with community spread, and you have the kind of congregate setting where people get together, particularly without masks, you’re really asking for trouble. Now’s the time actually to double down a bit, and I don’t mean close.

Dr Chris Murray, director of the University of Washington’s Institute for Health Metrics and Evaluation, told CNN there could be an explosion of new cases starting next month as people move indoors with the cold weather.

Currently, the forecast predicts the US death toll will reach 371,500 by the end of the year but could be reduced to 275,000 if the majority of Americans wear masks.

Raab says next week will be very significant for Brexit deal

Iran is ‘still on course to make Atomic bomb’

'Good riddance': Tech's flight from San Francisco is a relief to some advocates

Was Chopin gay? The awkward question in one of the EU's worst countries for LGBTQ rights