The man accused of shooting two Louisville police officers amid protests over a grand jury’s decision in the Breonna Taylor case was held on $1million bail.

Larynzno D. Johnson was arraigned before a judge in Louisville, Kentucky, on Friday on 14 counts of wanton endangerment and two counts of assault on police officers.

Johnson’s charges were the same ones brought against former Detective Brett Hankinson – the only officer to be indicted – in the ongoing Breonna Taylor proceedings.

On Wednesday, Johnson was among hundreds of emotional residents and supporters who flooded the streets on Wednesday. People chanted ‘Black lives matter’ as they sobbed and consoled each other over the decision.

Johnson, 26,  allegedly opened fire on a group of officers that night, including Major Aubrey Gregory and Officer Robinson Desroches. 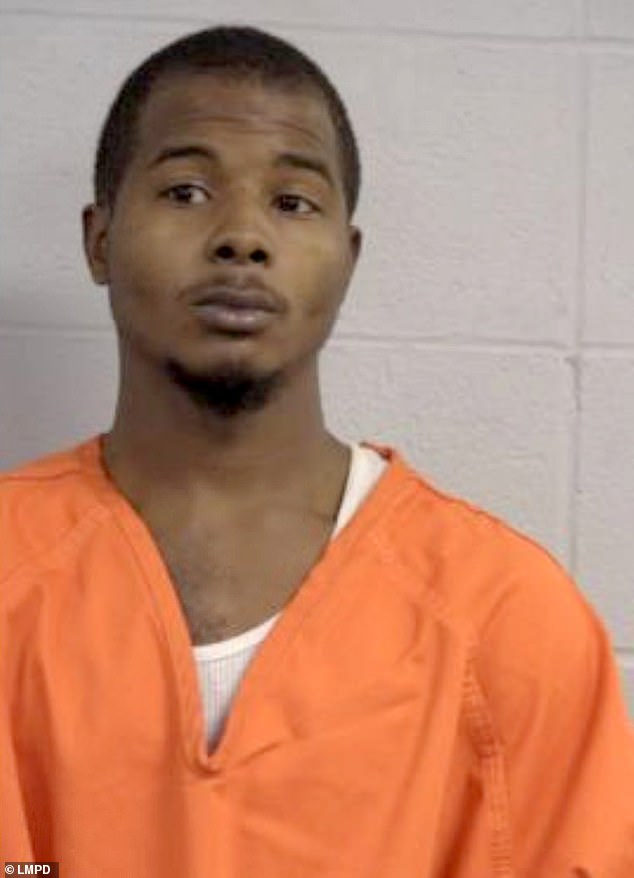 Larynzno D. Johnson (pictured) was held on a $1million bail on Friday after he allegedly shot and wounded two police officers in Louisville, Kentucky 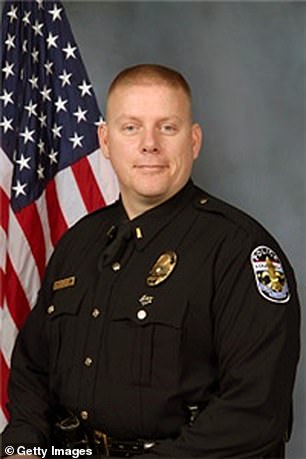 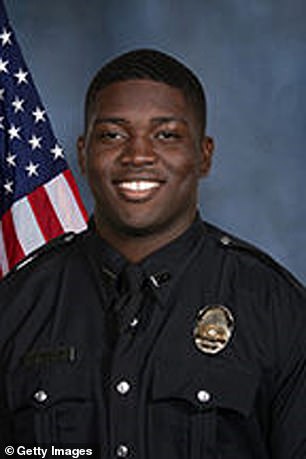 Major Aubrey Gregory (left) was struck by a bullet in the hip, while Officer Robinson Desroches. (right) was hit in the abdomen

Desroches was struck in the abdomen and remained at a local hospital in stable condition this week.

Gregory took a bullet to the hip, but was released from the hospital and is recovering. He is the commander of the Louisville Metro Police Department’s Special Operations Unit.

Police say Johnson was armed with a handgun and was identified by witnesses as the shooter. Johnson entered his not guilty plea to the judge on Friday.

NBC News reports that state prosecutors originally requested a $750,000 all-cash bond, but Johnson’s attorney sought to reduce fines to as low as $142,000.

Attorney Zac Meihaus asked that Johnson be allowed to wait for his trial under home confinement instead of a detention center.

Meihaus argued that Louisville on Wednesday night was a ‘war zone’ and that made it difficult to place blame solely on Johnson.

‘I don’t know if we can truly pinpoint that he is the person who fired the shot ‘heard around the world’ so to speak,’ he told the judge. 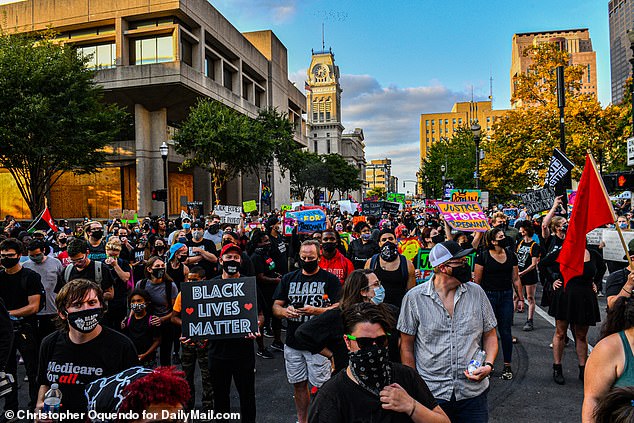 Protests over the killing of Breonna Taylor continued for the fourth day in a row Saturday in Louisville, Kentucky after a grand jury revealed no murder charges were drawn up against Brett Hankinson 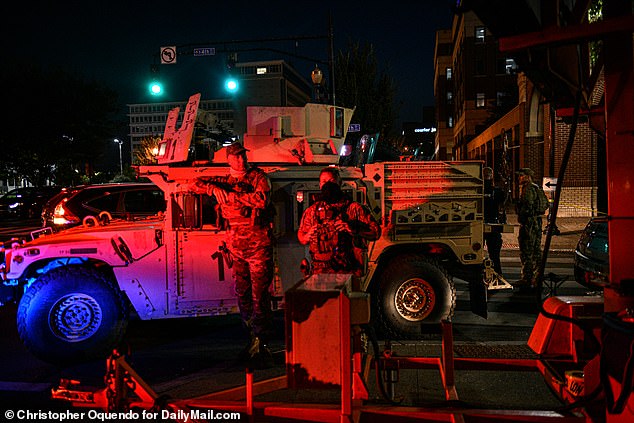 However, prosecutors claimed there was evidence suggesting Johnson was the man responsible for the officer shooting, noting several witnesses and video footage.

Johnson’s next court hearing is scheduled for October 5 with a public defender appointed to represent him.

Louisville authorities arrested 127 demonstrators related to the Breonna Taylor case on Wednesday, and that number has grown to 150 as of Saturday night.

Protesters have been marching in Louisville and other cities after a grand jury decided to bring no charges against Louisville police for the killing of Breonna Taylor, who was fatally shot after cops returned fire when her boyfriend shot and injured an officer during a drug raid.

New video footage has revealed the moments right after Johnson allegedly opened gunfire at the officers.

The footage shows a man in a multicolored hoodie waving a handgun wildly, after reaching over the head of another protester and opening fire in a chaotic scene.

One witness to the shooting of the officers has now come forward, saying that police deployed a flash-bang to deploy the crowd, and another protester came up behind him and opened fire just feet away.

‘I heard two gun shots right behind me, I turned around, this all happened within a second or two,’ the witness, who asked not to be named, told WLKY-TV.

‘I saw the shooter wearing a bright tie-dye hoodie. He was shooting directly at the police and fired about 2 or 3 shots while running then fired more shots then ran down the alley way 44,’ he said.

The Jefferson County Office of the Commonwealth’s Attorney tells DailyMail.com that it’s possible the charges could be upgraded to attempted murder, if the facts support it.

On Friday night, the unrest over the grand jury decision in the Taylor case entered a third night in Louisville and other cities across the nation, with demonstrators in Louisville claiming ‘sanctuary’ at a church after a 9pm curfew went into effect. 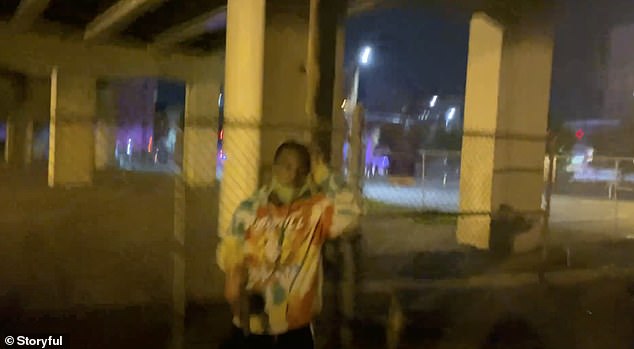 The suspected gunman who shot two Louisville police officers is seen in the immediate aftermath of the shooting on Wednesday night. Police identified him as 26-year-old Larynzo D. Johnson 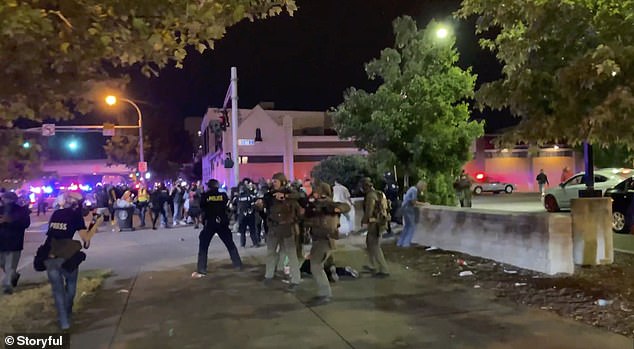 Police are seen taking Johnson into custody soon after the shooting. Cops say he was armed with a handgun, and was identified by witnesses as the gunman who opened fire and injured two officers

More than 100 people gathered at the First Unitarian Church, where clergy invited them to avoid arrest by using an exemption for churches in the city’s emergency curfew order.

Some of the demonstrators chanted ‘say her name, Breonna Taylor’ and ‘You can’t stop the revolution.’

The stone Gothic-style church was built in the late 19th century and is known for its progressive ideology. A large Black Lives Matter banner hangs outside it.

Video from the scene shows church members preparing a sumptuous buffet for the crowd, as demonstrators mingled inside and outside the church. 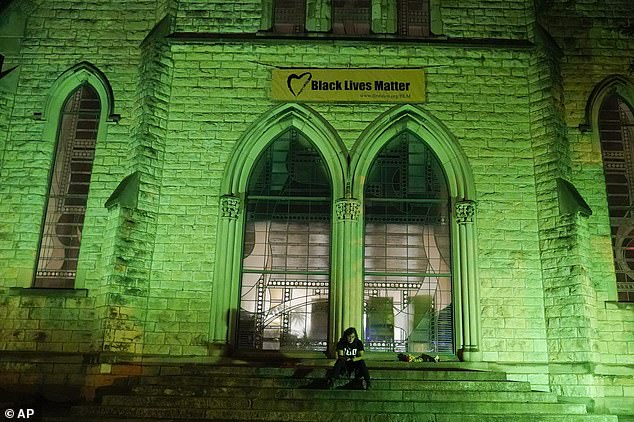 A lone protester sits on the steps of a church Friday in Louisville. Breonna Taylor’s family demanded Friday that Kentucky authorities release all body camera footage, police files and the transcripts of the grand jury hearings

Some of the Black Lives Matter supporters inside of the church were armed with tactical shotguns and AR-15-style rifles, video shows.

Shortly before midnight, police surrounded the church with guns drawn. A church leader said police had arrived after reports of an armed militia in the area, referring to the armed Black Lives Matter supporters.

Police withdrew after the clergy member advised them that the armed demonstrators had permission to be on church grounds.

After midnight on Friday, protesters had largely dispersed from downtown, with no major confrontations with police.

4 takeaways from the last presidential debate of 2020

Who won the debate

Twitter is Showing That People Are Anxious and Depressed