A state-controlled TV network in Russia created a disturbingly realistic deepfake video that portrays Donald Trump as Vladimir Putin’s pawn using quotes from the US president himself.

Russia Today released its parody ad, entitled ‘Trump is here to make RT Great Again! (or is he?!)’ on Tuesday.

The video set in November 2020 imagines a world where Trump is offered a job as a guest anchor for RT in Moscow after losing the election to Joe Biden.

It features Trump’s face superimposed on the body of a man with a similarly stocky build and a campy yellow wig – paired with real audio clips of the president fawning over Vladimir Putin, praising the Kremlin and slamming the mainstream media.

RT’s video was apparently meant to troll critics who have accused Trump of being in Putin’s pocket amid mounting concerns that the Russian government is trying to meddle in the US election, as they did in 2016. 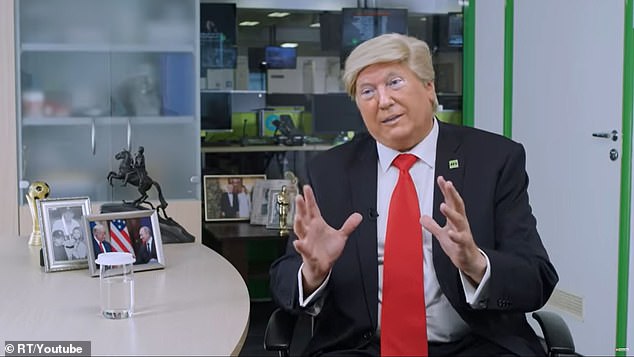 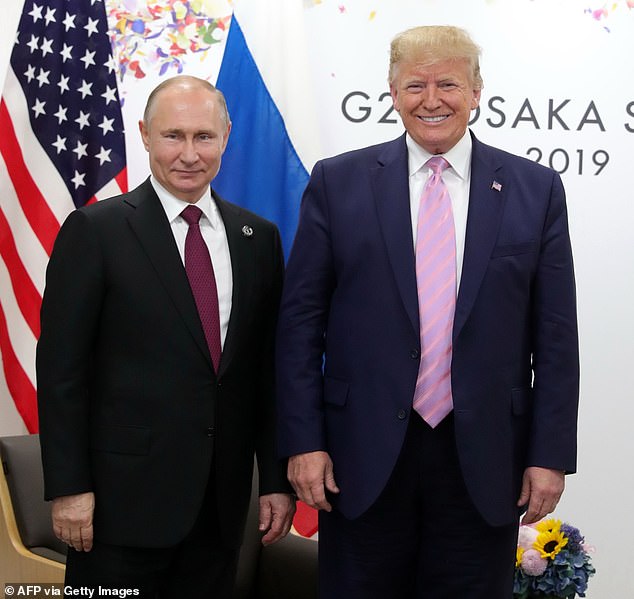 RT’s video was apparently meant to troll critics who have accused Trump of being in Putin’s pocket amid mounting concerns that the Russian government is trying to meddle in the US election. Trump is pictured with Putin in June 2019

The video opens with the Trump impostor arriving at the RT headquarters in a limo and shuffling into a dressing room labeled ‘Donald Trump: RT Special Host’.

It cuts to Trump proudly showing off a signed contract with ‘$1,000,000,000’ scrawled across it in marker as he says: ‘It was a very nice offer from President Putin.

The impostor is then heard explaining his reasoning for joining the network – again using real audio from Trump – in an on-camera interview spliced with clips of him exploring the newsroom. 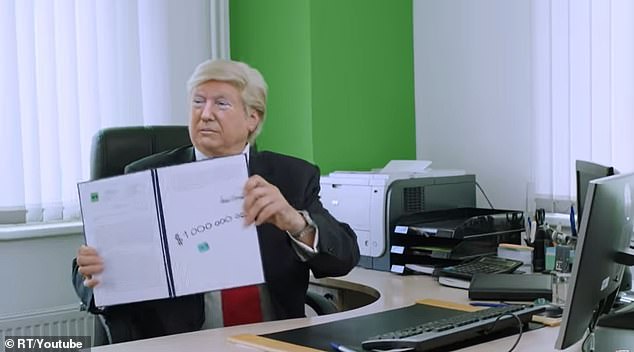 The video imagines a world where Trump is offered a job as a guest anchor for RT in Moscow after losing the election to Joe Biden. The scene above shows a Trump impostor showing off his signed contract as he says: ‘It was a very nice offer from President Putin 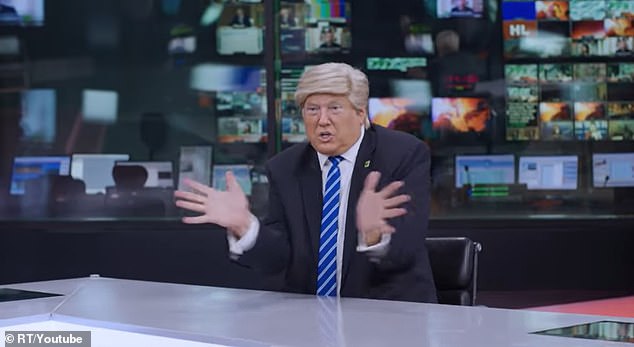 In the next scene, fake Trump sits behind an anchor desk and squints at the teleprompter as he moans: ‘I can’t read this. They change fast. Changes so fast.’

He’s then seen looking over marketing materials, including a poster that shows him with Putin and the words ‘Putin’s Apprentice’.

Cutting back to the on-camera interview, fake Trump says of his new home: ‘It’s an amazing country, you know, so many friends in Russia, and I’m very excited to be here.’

Those comments were lifted from a 2013 interview when Trump hosted the Miss Universe contest in Moscow.

He also praises the Russian government for the salary they’ve offered him to join their media machine, saying: ‘They’re very nice. I make a lot of money with them. They pay me millions and hundreds of millions.’

The real Trump made those remarks in reference to Saudi Arabia at a 2015 campaign rally.

The video continues with fake Trump admiring the walls of the Kremlin.

Real Trump said that quote when talking about the wall he’s championed at the border between the US and Mexico. 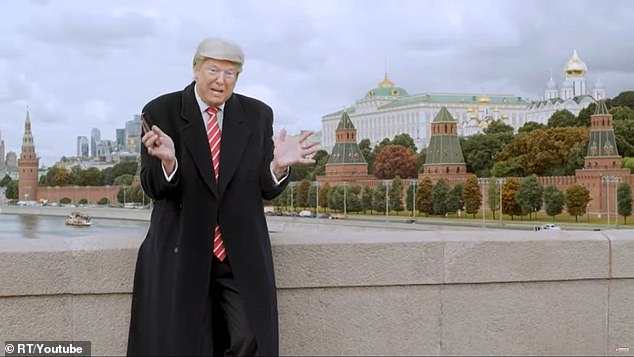 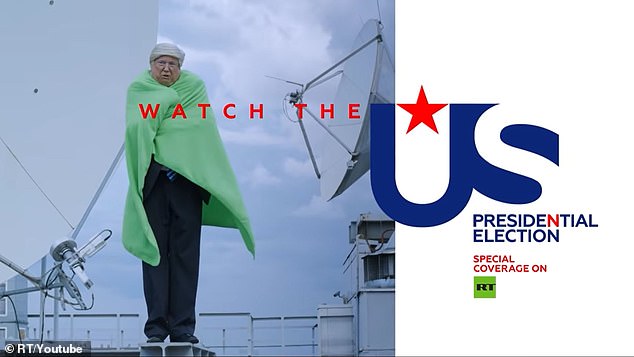 The video ends with a call-out for viewers to tune in to RT’s coverage of the US presidential election.

In a post on its website, RT wrote: ‘If all doesn’t go well for Donald Trump at the polls on November 3, then don’t worry Mr. President, just hop on a plane to Moscow because there’s a job waiting for you at RT.

‘After all, the mainstream media has accused RT and Trump of working together to swing elections for years, so they might as well do it for real.

‘What would it look like? Well, here is footage of the secret negotiations that have already taken place.’

RT’s sarcastic attempt to discredit rumors that Trump is colluding with Russia came just as a CIA report concluded that Putin is ‘probably directing’ a campaign to denigrate Biden.

‘We assess that President Vladimir Putin and the senior most Russian officials are aware of and probably directing Russia’s influence operations aimed at denigrating the former U.S. Vice President, supporting the U.S. president and fueling public discord ahead of the U.S. election in November,’ the CIA assessment stated, according to The Washington Post.

Taraji P. Henson Confirms She And Kelvin Hayden Are Over And Explains Why It Didn’t Work Out!