Breonna Taylor’s sister posted a poignant message on her Instagram account on Wednesday just after a grand jury in Louisville declined to bring charges against the police officers charged with her killing.

‘Sister, I am so sorry,’ Taylor’s sister, Juniyah Palmer, wrote on Instagram next to a photo of the two together.

She also posted a story on Instagram which included a graphic that read: ‘sister, you was failed by a system you worked hard for and I am so sorry. I love you so so so so so much.’ 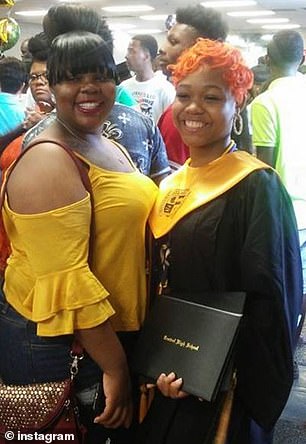 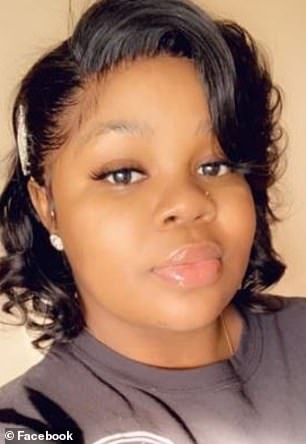 ‘Sister, I am so sorry,’ Breonna Taylor’s sister, Juniyah Palmer, wrote on Instagram next to a photo of the two together (left) just after a Louisville grand jury announced on Wednesday that it would not indict any of the three police officers directly for killing Taylor (right) 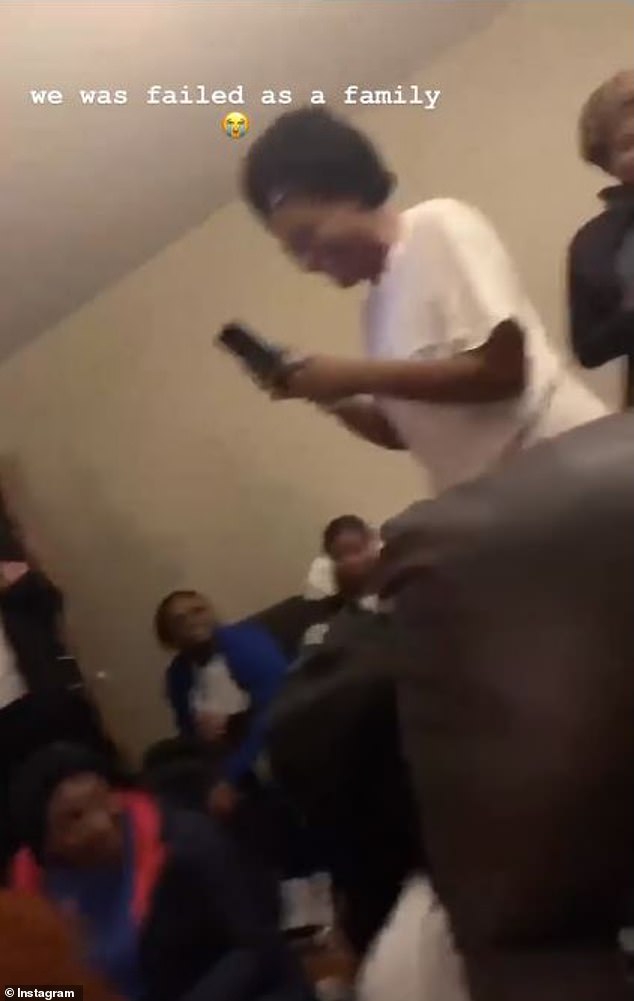 Palmer also posted a graphic on Instagram which read: ‘We was failed as a family’ 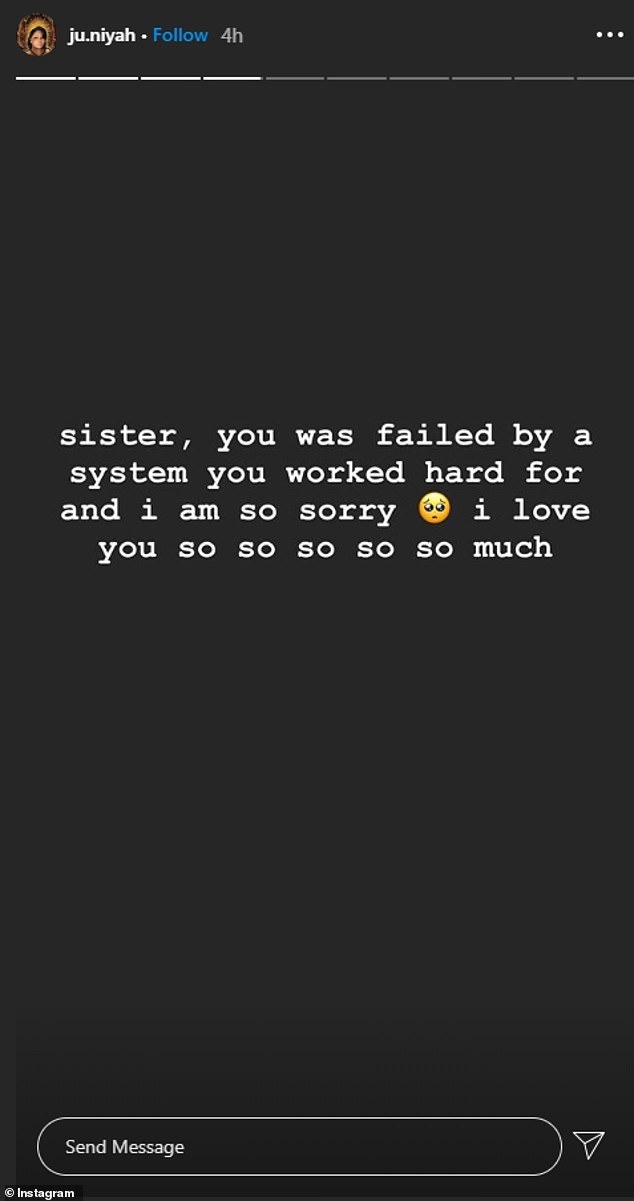 She also posted a story on Instagram which included a graphic that read: ‘sister, you was failed by a system you worked hard for and I am so sorry. I love you so so so so so much.’ 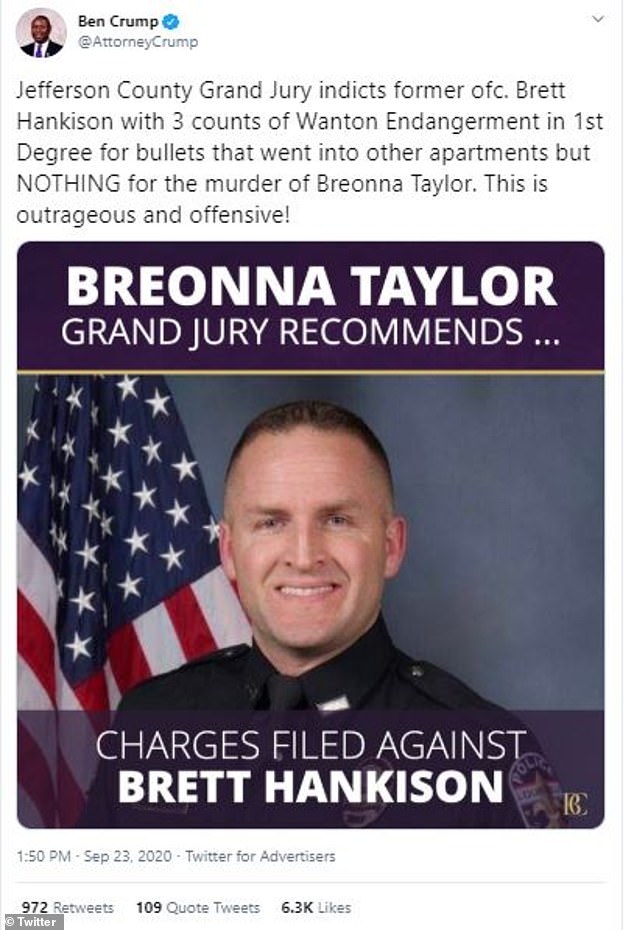 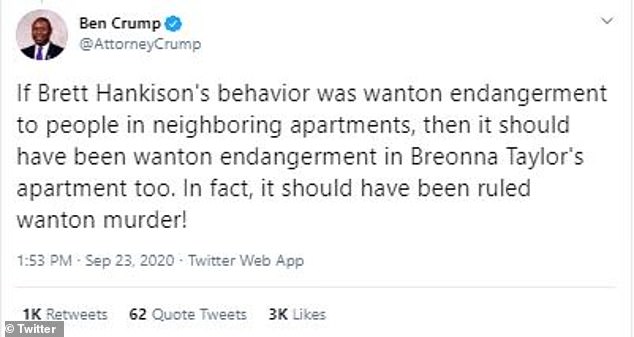 Angry protesters demanded justice in Louisville on Wednesday after charges were filed against only one policeman involved in the controversial fatal shooting of Taylor, the 26-year-old black woman whose name has become a rallying cry of the Black Lives Matter movement.

Detective Brett Hankison, who was fired in June, was charged by a grand jury with three counts of ‘wanton endangerment’ over shots he fired into apartments adjoining Taylor’s home.

But neither Hankison nor the two officers who fired the shots that killed Taylor were charged in direct connection with her death. 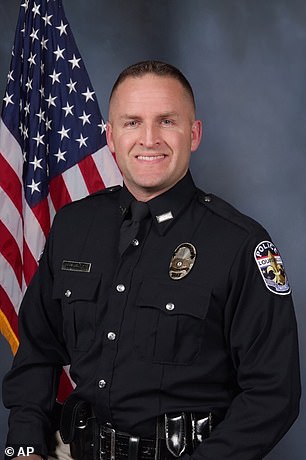 ‘In fact, it should have been ruled wanton murder!’

‘But by no means does it define this movement or this moment in our history.

‘The Grand Jury may have denied Breonna justice, but this decision cannot take away her legacy as a loving, vibrant young Black woman who served on the front lines in the midst of a devastating pandemic.

‘Make no mistake, we will keep fighting this fight in Breonna’s memory, and we will never stop saying her name.’

Thousands of demonstrators took to the streets of Louisville, the largest city in Kentucky, following the announcement, and Ben Crump, a lawyer for the Taylor family, condemned the grand jury decision as ‘outrageous and offensive.’

Police in riot gear were seen making several arrests in Louisville after the grand jury decision.

A state of emergency and a 9pm curfew has been declared by the mayor of the city, which has a population of 600,000, with much of downtown closed to traffic.

Some downtown business owners boarded up their shops in anticipation of unrest sparked by the grand jury decision.

Taylor, an emergency room technician, was shot dead after three plainclothes policemen turned up at her door in the middle of the night to execute a search warrant.

Taylor’s boyfriend, who was in bed with her, grabbed a gun and exchanged fire with the officers. He later said he thought they were criminals.

The officers, who had not activated their body cameras as required, shot Taylor multiple times, killing her. 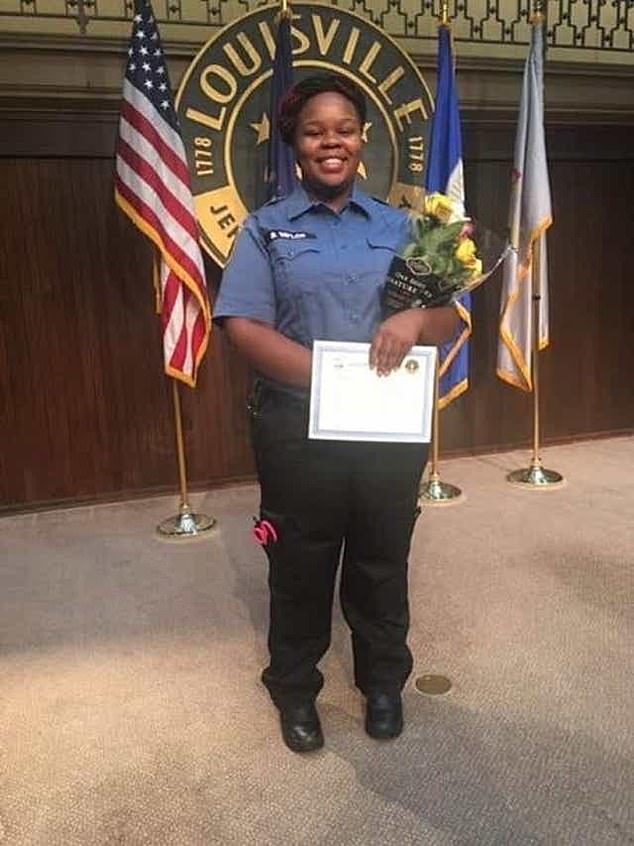 A police sergeant was wounded.

Kentucky Attorney General Daniel Cameron said Hankison had not fired the fatal shots and the two other officers who opened fire had done so in self-defense.

He said Hankison was charged with three counts of ‘wanton endangerment’ over shots he fired into adjoining apartments. He could face five years in prison for each count if convicted.

‘This is a tragedy,’ Cameron said.

‘I know that not everyone will be satisfied with the charges reported today.

‘Every person has an idea of what they think justice is.’

Taylor’s sister, Juniyah, posted a graphic on Instagram denouncing Cameron as ‘Mitch’s b****.’

Mitch is a reference to Mitch McConnell, the Senate majority leader and Republican from Kentucky. 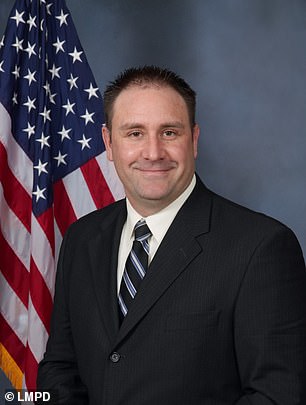 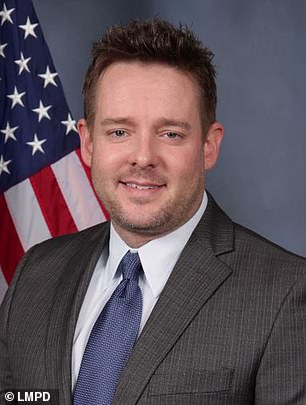 Officers Myles Cosgrove (left) and John Mattingly (right) who were present during the police raid on March 13, were not charged on Wednesday. Hankison was fired from the LMPD while the other two officers were placed on administrative assignment

The American Civil Liberties Union condemned the grand jury charges as ‘not accountability and not close to justice.’

‘This is the manifestation of what the millions of people who have taken to the streets to protest police violence already know: Modern policing and our criminal legal system are rotten to the core,’ the ACLU said.

Cameron, the attorney general, also addressed reports that the police officers had executed a ‘no-knock’ search warrant on Taylor’s home, bursting in without warning.

‘They did knock and announce,’ he said. ‘That information was corroborated by another witness.’

The city of Louisville settled a wrongful death suit with Taylor’s family for $12million last week.

The civil settlement reflected the public pressure and emotion surrounding her death, which came about two months before that of George Floyd, a black man who was killed by a white police officer in Minneapolis.

Cameron appealed for calm and Louisville police chief Robert Schroeder said the authorities would not tolerate any ‘violence or destruction of property.’

‘We are prepared to meet any challenge we may face,’ Schroeder said, calling for demonstrators to protest ‘peacefully and lawfully.’ 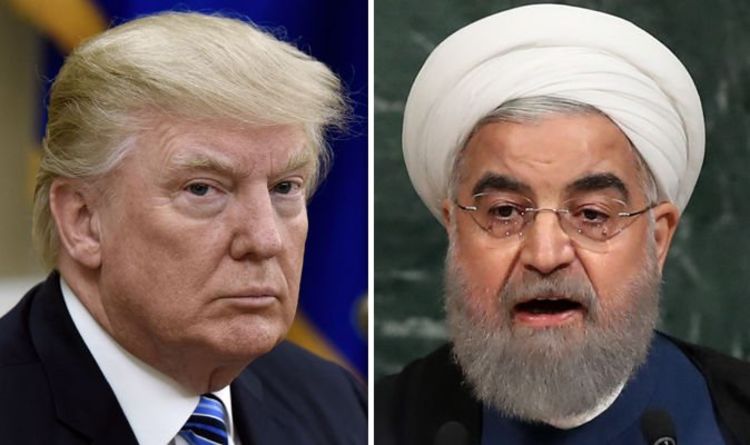 US troops have been inside Syria since 2015 aiding the fight against ISIS. Last December President Trump announced he was withdrawing all […] 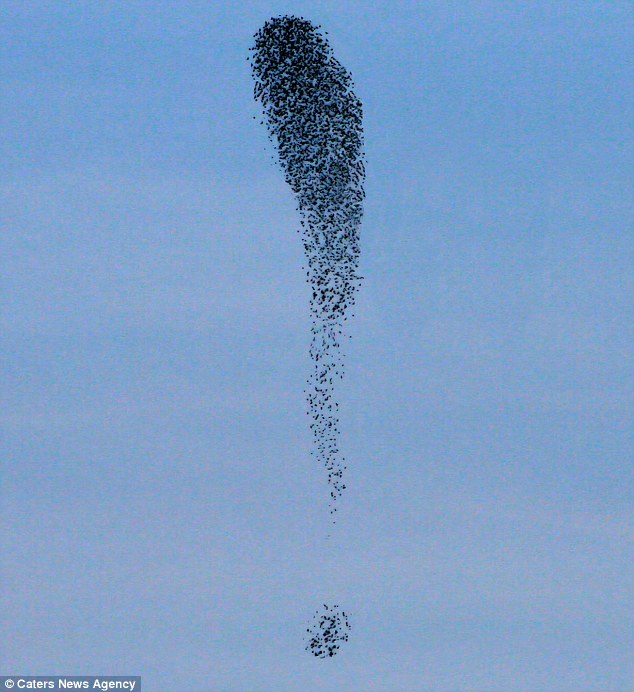 A flock goes into shock! Photographer captures the moment 5,000 birds create an exclamation mark formation in the sky Published: 11:46 BST, […] 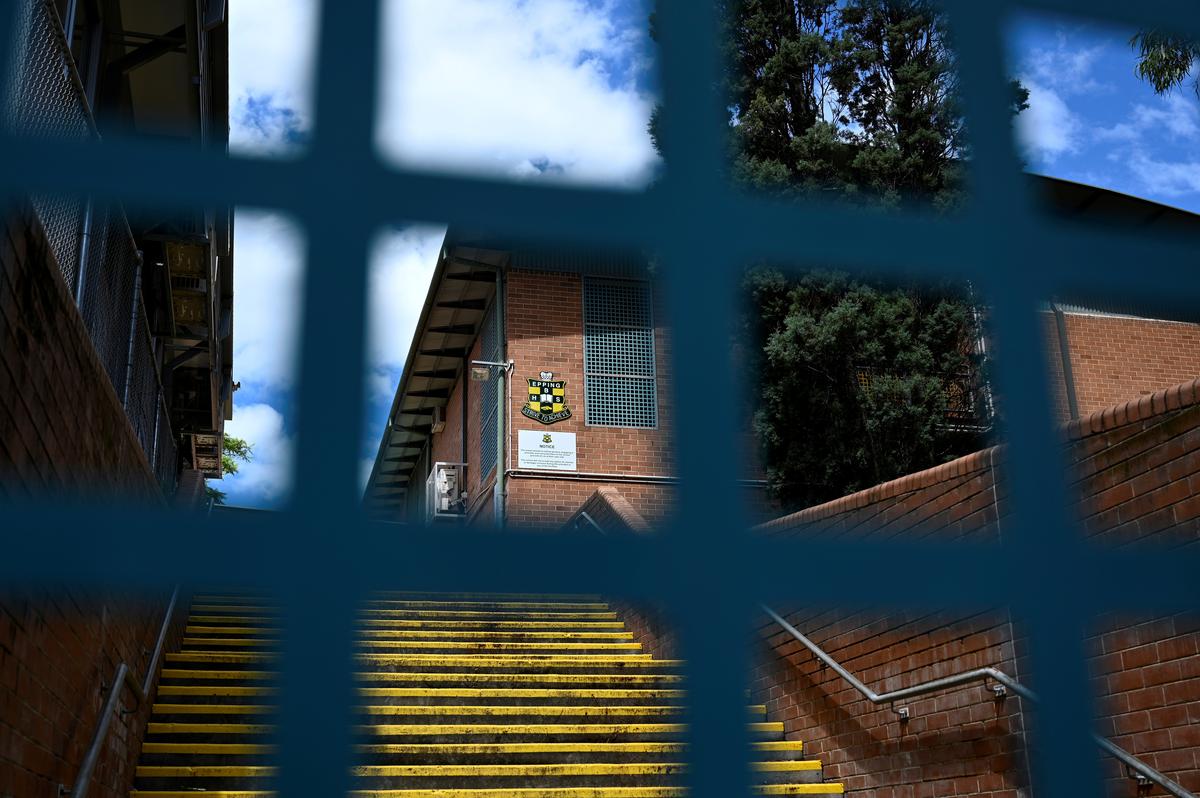 SYDNEY (Reuters) – Two schools in the Australian city of Sydney closed on Monday after three students tested positive for the coronavirus, […] 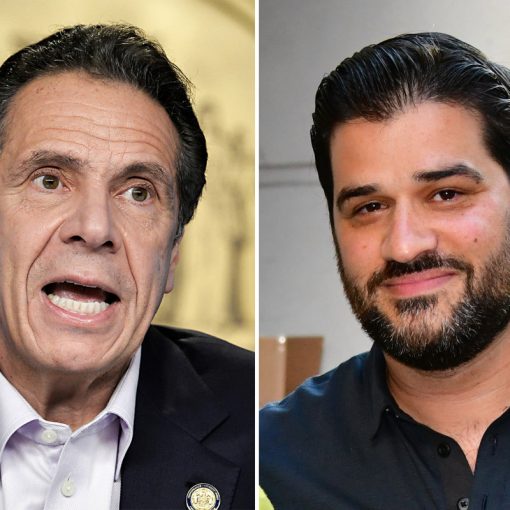 New York City may be coming back from the dead — but its comedy scene is still six feet under. An Upper […]