Joe Biden on Tuesday made repeated references to the nation crossing the 200,000 line of coronavirus deaths amid the ongoing pandemic – while the White House defended President Trump’s comment at a rally that young people fare better and it ‘affects virtually nobody.’

Biden tweeted out a large image of the number 200,000 with white on black, writing: ‘t didn’t have to be this bad.’

The image contained the number of dead listed state-by-state. 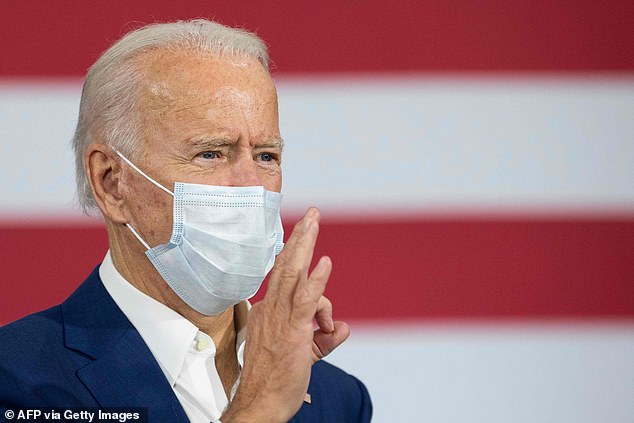 ‘200,000 Americans have died from this virus. It’s a staggering number that’s hard to wrap your head around,’ wrote former Vice President Joe Biden on Twitter as the nation crossed the threshold

In another missive, Biden wrote: ‘200,000 Americans have died from this virus. It’s a staggering number that’s hard to wrap your head around. But behind every COVID-19 death is a family and community that will never again be the same. There’s a devastating human toll to this pandemic — and we can’t forget that.’

His comments came as media organizations around the country began marking the 200,000 milestone.

At the White House, press secretary Kayleigh McEnany blasted reporters who asked about Trump’s comments at a rally Monday night that ‘“It affects virtually nobody,” adding: ‘It’s an amazing thing.”

‘It affects elderly people. Elderly people with heart problems and other problems. If they have other problems, that’s what it really affects. That’s it,’ Trump said, noting the disease primarily hits the elderly and those with preexisting conditions – a huge number of Americans. 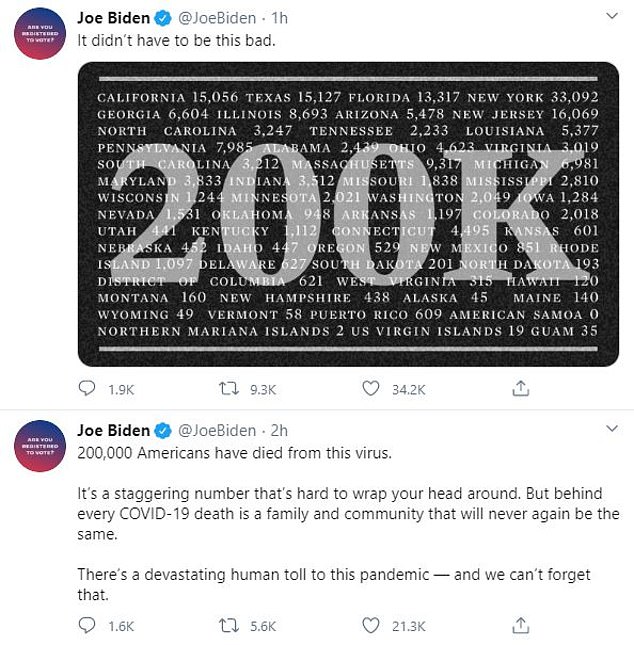 ‘Today is dark, but we will overcome this,’ Biden wrote 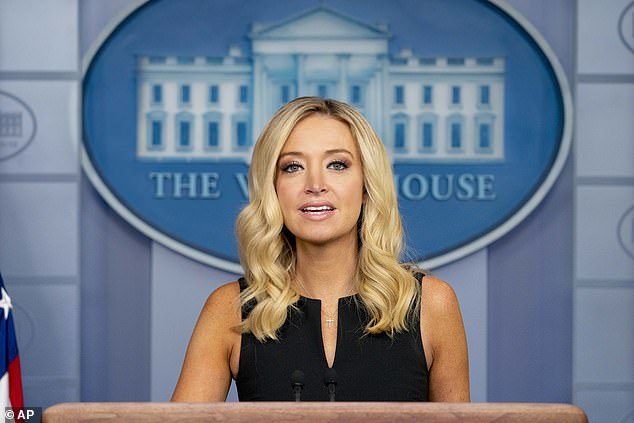 ‘You know, in some states, thousands of people, nobody young [dies of the disease]. Below the age of 18, like, nobody. They have a strong immune system, who knows?’ he continued. ‘You look — take your hat off to the young, because they have a hell of an immune system. But it affects virtually nobody. It’s an amazing thing.’

Pressed on the comments, McEnany said: ‘The president is telling people the truth.’

She accused CNN’s Jim Acosta of taking the comments ‘out of context’ – although he noted that he had referenced that Trump was talking about young people when he made the comment.

‘The president is telling people the truth,’ she said. She told Acosta: ‘ You’re right that he was referring to young people. You are taking it out of context.’ He countered that children can still get sick form the disease and spread it in the community.

McEnany reread some of Trump’s comments and said they were ‘factually true’ and pointed to several states with zero pediatric deaths.

‘COVID has a .01 per cent mortality for people under the age of 18. So it is not a disease that affects young people in the same way as older people, which is the exact point the president was making last night,’ she said.

Speaking to the 200,000 death toll, she pointed to an early model that showed ‘the prospect of 2 million people potentially perishing.’

‘The fact that we have come nowhere near that number is a testament to this president taking immediate action,’ she said.

‘We grieve when even one life is lost,’ she said.

More than 200,000 Americans have now died from COVID-19 – a bleak milestone reached on Tuesday that comes even as the national death rate continues to decline.

The number of Americans dying from coronavirus per day, based on a weekly average, is now at just over 760.

It is down from the peak 2,000 deaths being reported per day back in April.

While deaths continue to decline across the country, fatalities related to COVID-19 are a lagging indicator and can potentially rise several weeks after new cases.

The national infection rate started increasing just over a week ago, which is a rise health experts have attributed to some schools reopening and parties over the Labor Day holiday.

The average number of COVID-19 cases being reported per day is now at just under 40,000 with total infection in the US topping 6.8 million.

The number of Americans dying from coronavirus per day, based on a weekly average, is now at just over 760. It is down from the peak 2,000 deaths being reported per day back in April

Before this uptick, cases, on average, had been trending downwards nationally since July when about 70,000 infections were being reported daily.

California, Texas and Florida – the three most populous US states – have recorded the most coronavirus infections and have long surpassed the state of New York, which was the epicenter of the outbreak earlier this year.

The southern states of Texas and Florida contributed the most deaths in the US in the past two weeks and were closely followed by California.

Deaths in those three states are currently declining.

The states that saw the largest increases in deaths in the last week were Arkansas, Kansas and Virginia.

The University of Washington’s Institute for Health Metrics and Evaluation is predicting that deaths will rise to more 378,000 by the end of the year.

The model forecasts that more than 114,000 lives could be saved if the majority of Americans wear masks but epidemiologists have already warned that mask-wearing is already declining across the country. 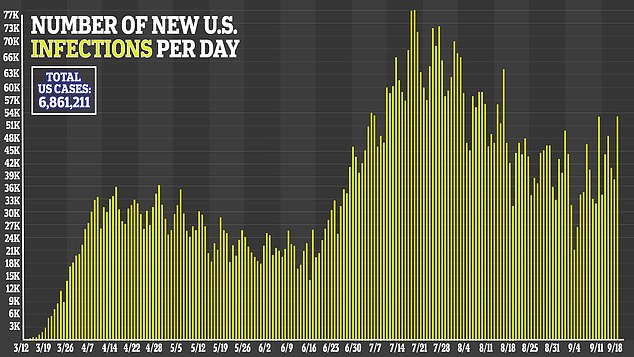 The national infection rate started increasing just over a week ago. The average number of COVID-19 cases being reported per day is now at just under 40,000 with total infection in the US topping 6.8 million 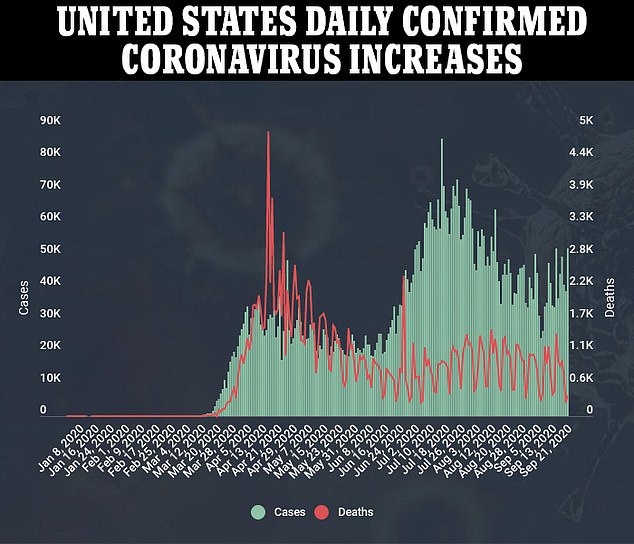 The death rate projected by the IHME model, which has been cited by the White House Coronavirus Task Force, would more than triple the current daily death rate to to 3,000 per day in December.

During the early months of the pandemic, 200,000 deaths was regarded by many as the maximum number of lives likely to be lost in the United States to the virus.

President Donald Trump on Monday said he had done a phenomenal job on the pandemic.

Trump has admitted to playing down the danger of the coronavirus early on because he did not want to ‘create a panic.’

Australia says US has resettled most of its 1,100 refugees