President Trump has lost an estimated $100million on two of his flagship hotel properties during his time in the Oval Office, according to a new report.

Before Trump took an oath of office during his 2017 presidential inauguration, the New York native was a well-known businessman who found footing in the expansive real estate industry.

He’s amassed a number of properties across the globe, but two of his most well known include the Trump National Doral Miami and the Trump International Hotel in Washington D.C.

In ‘White House, Inc.: How Donald Trump Turned the Presidency into a Business’, Dan Alexander, a senior editor at Forbes, reports that those two properties have actually lost the president a slew of money over the last four years. 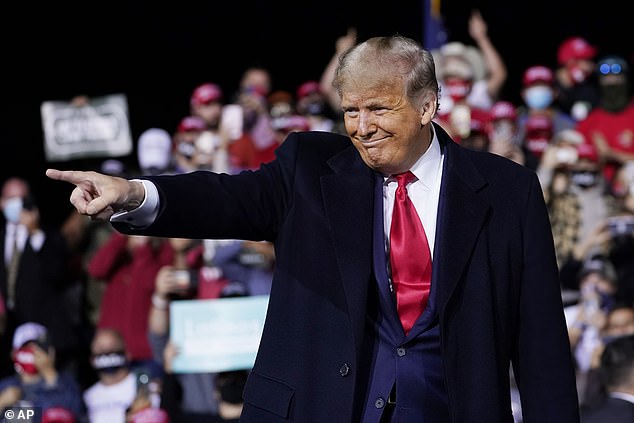 In an adaption shared to Forbes, it’s reported that the Trump International Hotel almost reached $6million in revenue in January 2017 after opening three months before.

The hotel made $1.6million in profit over the span of one month, in part due to Trump’s wealthy friends purchasing rooms during that time and the 58th Presidential Inaugural Committee.

The committee raised money from Trump supporters for the inauguration week, which reportedly totaled to $1.5million.

Forbes reports that, based on their findings, at least 25 per cent of the revenue brought to the Trump International hotel came from political donors that year.

But on July 24, some three years after the Trump’s election win, Forbes determined the property valued at $168million – $2million less than the $170million mortgage Trump acquired.

With at least $30million going towards renovations, the numbers indicate a loss for the Trump family. 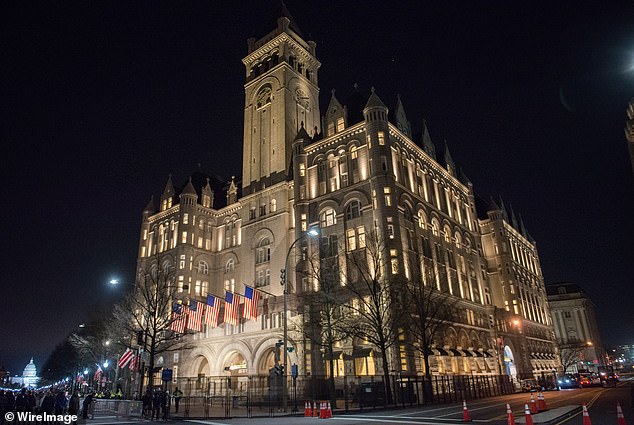 One property listed in the report is the Trump International Hotel in Washington D.C. (pictured), which Trump officially opened in 2016 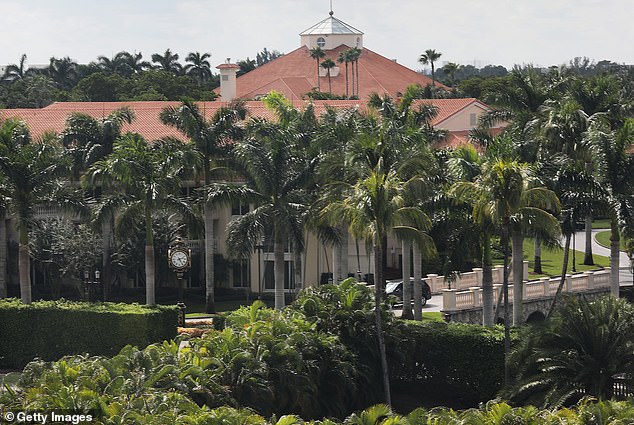 The second property was Trump National Doral Miami in Florida (pictured), where the World Golf Championships tournament was previously held

Down south in Florida, Trump National Doral Miami experienced a similar situation of money loss over the property.

Forbes reports that Trump National Doral Miami, a resort and golf course, is worth $153million before factoring in debt. The eponymous resort has $125million in mortgages against it.

Trump’s interest is currently at an estimated $28million, but Forbes reports that number was around $70million at the start of his presidency.

The reported financial losses allegedly sustained by Trump clashed with his repeated claims that his experience as a businessman would help ‘make America great again.’

And staff with Trump Organization reportedly noted that controversial comments he made during his 2016 campaign played a role in that.

According to Forbes, Jessica Vachiratevanurak, Trump’s tax specialist, said there were ‘ramifications’ following the campaign.

‘I met with the director of finance, as well as the director of development for all of the Trump Organization,’ Vachiratevanurak said while speaking with a magistrate with the Miami-Dade County Appraiser’s Office.

‘And they mentioned that throughout 2016, because of the political climate, there have been severe ramifications of the things that were said during campaigning, the comments that were made.’ 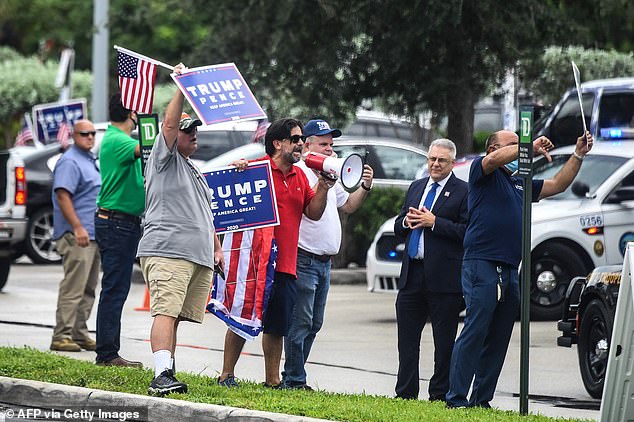 One such ramification included the Professional Golfer’s Association, which had revealed in 2016 that the World Golf Championships tournament was moved to Mexico after sponsors proved scarce.

‘Donald Trump is a brand, a big brand, and when you’re asking a company to invest millions of dollars in branding a tournament and they’re going to share that brand with the host, it’s a difficult conversation,’ PGA Tour commissioner Tim Finchem told ESPN.

Normally, the highly-attended event raked in substantial revenue for Doral that it would not see again.

Trump’s campaign also reportedly caused a number of charities to withdraw their events from Doral, saying they could not be associated with his brand.

‘His name is actually being removed from the Trump SoHo hotel,’ a Trump Organization representative said, per Forbes. 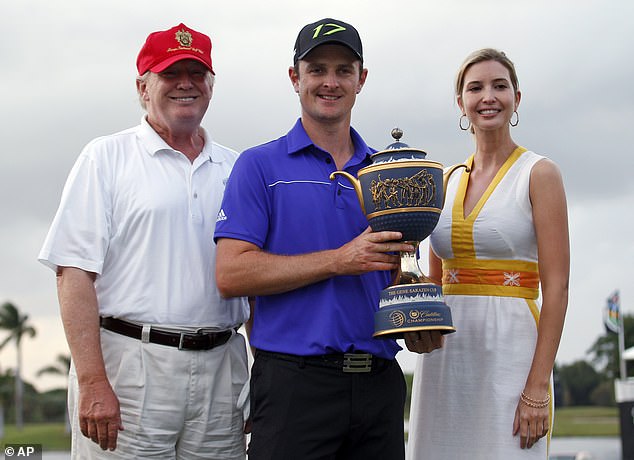 ‘It was a property that was being regularly frequented by, you know, NBA stars and NFL stars, and now they’re quoted in this article as saying, “I’m not going there. I’m not going to support this brand.’

‘So there have been severe ramifications of the comments that were made throughout the campaigning process and since.

‘The property was definitely impacted by that, and you’ll see in the financials that there is a significant drop in revenue from last year to this year, and it reflects that.’

Profits, as noted by Forbes, was measured as earning before interest, taxes, depreciation and amortization. 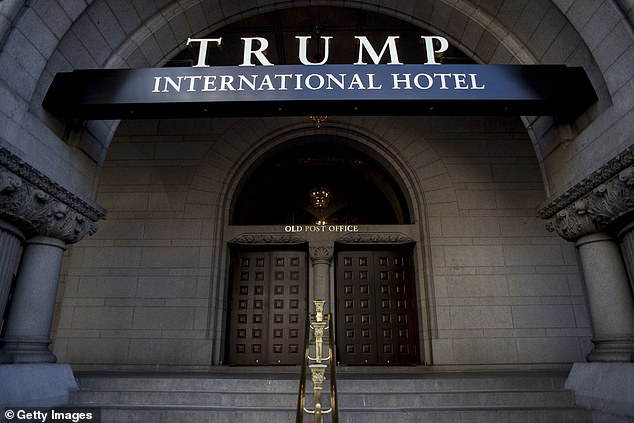 According to Forbes, the profit margin for the Trump International Hotel is estimated at just 11 per cent based on their findings. (pictured)

Meanwhile, misrepresented reporting around the Trump International Hotel in Washington D.C. led some to believe its revenue was much higher than in reality.

Federal officials in the executive branch are required to disclose the income that’s produced by their assets in an annual financial report.

With real estate, filers can record ‘rent,’ or revenue, under a column called ‘income amount.’

When reporting on Trump’s disclosure, some journalists classified the number as ‘income’ instead of ‘revenue’ – sparking confusion that Trump personally earned $40million.

Forbes reports that per federal guidelines, officials can list the rent amount ascribed to them personally instead of the full amount a property produces.

This means that although Trump listed the Trump International Hotel revenue at $40million, that may not be that official total revenue of the property.

Ivanka Trump, the president’s daughter and trusted advisor,  wrote that hotel revenue for Trump International at $3.9million on her filing.

Based on their estimation, Forbes reports that the hotel’s true revenue is closer to $52.3million. 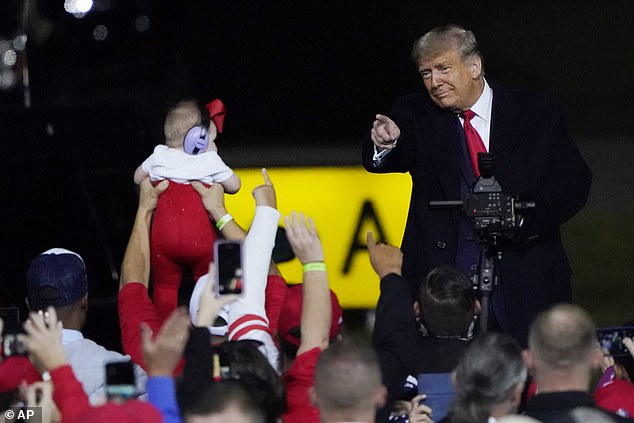 Pictured: President Donald Trump wraps up his speech and points to an infant at a campaign rally at Fayetteville Regional Airport, Saturday

According to Forbes, the profit margin for the Trump International Hotel is estimated at just 11 per cent based on their findings.

Documents accidentally published by the General Services Administration showed four months of financial data on its website that revealed information regarding the Trump Organization in 2017.

The Trump Organization that year brought in $18.1million of revenue during the first four months of 2017 – 49 per cent past projections. The hotel, meanwhile, produced $2million in profits.

While it initially indicated that Trump pocketed a hefty check, Forbes reports that $2million of profit compared to $18million in revenue does not amount to much.

‘That seems low for a hotel, for sure,’ Dan Wasiolek, a hospitality analyst at Morningstar, told Forbes.

‘You know, I would have expected that it would be closer to 20%. Even more troubling for the hotel: that underperformance overlapped with Trump’s inauguration, when he was hauling in huge money from his supporters.’

In 2019, the Trump Organization created a document for potential hotel investors that included projected revenues at $67.7million in 2020.

Assuming revenues in 2018 were $52.7million, Forbes estimates a 28 per cent increase over two years. Additionally, the document suggested that the hotel would produce $6million in earnings when revenue jumped. 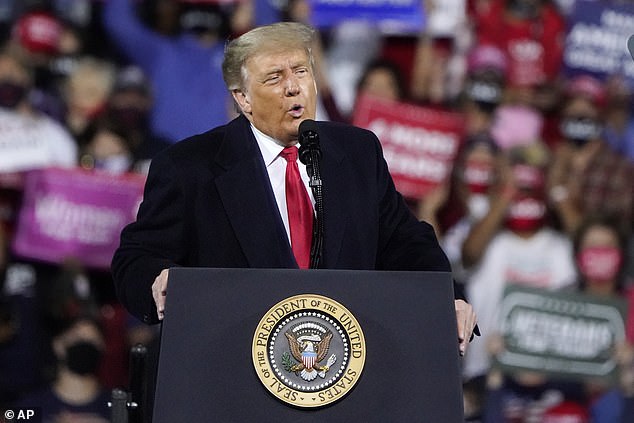 Trump Organization representative, per Forbes: ‘So there have been severe ramifications of the comments that were made throughout the campaigning process and since’ Pictured: President Trump

Forbes reports that those numbers suggest that the hotel now has a profit margin of just 9 per cent.

Another massive hit to Trump and the Trump Organization was the COVID-19 pandemic.

Despite Trump playing down the severity of the illness, it was widely felt at his properties and businesses.

Unlike other business, the Trump Organization was not awarded a federal businesses loan passed by Congress.

‘To a certain extent, I’m glad I’m not there because it would be rough not to have that opportunity because it is going to save some companies. But yeah, I’m not sure what’s going to happen with them.’

Prisoners won the right to stimulus checks. Some prisons are standing in the way.

The number of older people getting coronavirus in Europe is rising again. That's really bad news

Why are diabetics STILL not given the gadget that frees them from finger prick blood tests?