Former President Barack Obama hailed late Justice Ruth Bader Ginsburg as an inspiration to generations of Americans as he called on Senate Republicans to hold off on trying to replace her before the election.

Her death, just 46 days before the presidential vote, has left the Supreme Court at a historic moment as Ginsburg’s replacement could alter the political leaning of the court for decades if Trump can push through his third conservative justice in one term.

‘The questions before the Court now and in the coming years — with decisions that will determine whether or not our economy is fair, our society is just, women are treated equally, our planet survives, and our democracy endures — are too consequential to future generations for courts to be filled through anything less than an unimpeachable process,’ Obama wrote.

The former president cited the controversy over his nomination of Merrick Garland to the top court in 2016 in saying the Republicans ‘invented the principle that the Senate shouldn’t fill an open seat on the Supreme Court before a new president was sworn in’ and called on them to respect the precedent they set. 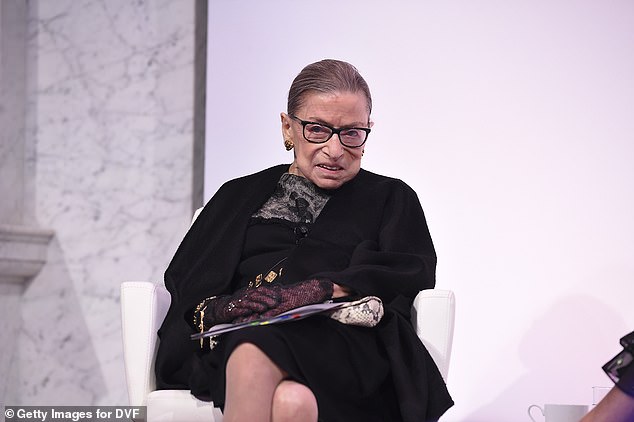 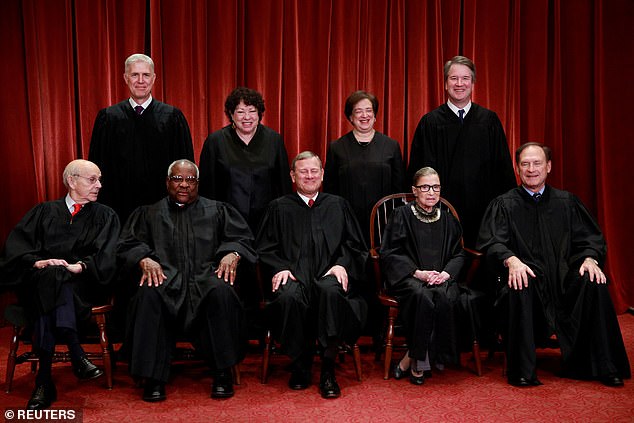 The closely divided court had five justices with conservative bents and four liberals, before Ginsburg’s death. Pictured, Ginsburg with the other Justices

Sixty years ago, Ruth Bader Ginsburg applied to be a Supreme Court clerk. She’d studied at two of our finest law schools and had ringing recommendations. But because she was a woman, she was rejected. Ten years later, she sent her first brief to the Supreme Court — which led it to strike down a state law based on gender discrimination for the first time. And then, for nearly three decades, as the second woman ever to sit on the highest court in the land, she was a warrior for gender equality — someone who believed that equal justice under law only had meaning if it applied to every single American.

Over a long career on both sides of the bench — as a relentless litigator and an incisive jurist — Justice Ginsburg helped us see that discrimination on the basis of sex isn’t about an abstract ideal of equality; that it doesn’t only harm women; that it has real consequences for all of us. It’s about who we are — and who we can be.

Justice Ginsburg inspired the generations who followed her, from the tiniest trick-or-treaters to law students burning the midnight oil to the most powerful leaders in the land. Michelle and I admired her greatly, we’re profoundly thankful for the legacy she left this country, and we offer our gratitude and our condolences to her children and grandchildren tonight.

Ruth Bader Ginsburg fought to the end, through her cancer, with unwavering faith in our democracy and its ideals. That’s how we remember her. But she also left instructions for how she wanted her legacy to be honored.

Four and a half years ago, when Republicans refused to hold a hearing or an up-or-down vote on Merrick Garland, they invented the principle that the Senate shouldn’t fill an open seat on the Supreme Court before a new president was sworn in.

A basic principle of the law — and of everyday fairness — is that we apply rules with consistency, and not based on what’s convenient or advantageous in the moment. The rule of law, the legitimacy of our courts, the fundamental workings of our democracy all depend on that basic principle. As votes are already being cast in this election, Republican Senators are now called to apply that standard. The questions before the Court now and in the coming years — with decisions that will determine whether or not our economy is fair, our society is just, women are treated equally, our planet survives, and our democracy endures — are too consequential to future generations for courts to be filled through anything less than an unimpeachable process.

‘A basic principle of the law — and of everyday fairness — is that we apply rules with consistency, and not based on what’s convenient or advantageous in the moment,’ he wrote. ‘Republican Senators are now called to apply that standard.’

Obama also lauded Ginsburg as a ‘warrior for gender equality’ who ‘helped us see that discrimination on the basis of sex isn’t about an abstract ideal of equality; that it doesn’t only harm women; that it has real consequences for all of us. It’s about who we are — and who we can be.’

The closely divided court had five justices with conservative bents and four liberals, before Ginsburg’s death.

If Trump were to choose a conservative judge to replace the liberal Ginsburg, as expected, the court’s conservatives would have more heft with a 6-3 majority.

The president repeatedly touts his success in already nominating two conservative Supreme Court Justices as one of the biggest achievements of his term but wishes to extend his influence further.

He has already remade the federal bench for a generation and the new vacancy in the highest court gives the president the ability to shape its future for decades to come if he is re-elected in November.

The current make-up of the US Supreme Court

Trump’s two nominees to the court, Justice Neil Gorsuch, 53, and Justice Brett Kavanaugh, 55, are young appointments meaning that their potential tenure could last for decades.

If possible, the president is expected to pick a third young nominee, increasing the length of his influence on the court.

If he loses in November without having secured a third Justice, Trump could still attempt to push a nomination through the Republican-controlled Senate before Biden’s inauguration in January, although this would likely be met with fury by Democrats.

If there was still a vacancy by January, a victorious Biden could appoint a liberal nominee, leaving the conservative-liberal balance at 5-4.

With other current Justices on the court in their 70s and 80s, without the Trump nominee, a Biden presidency could have further vacancies that could swing the balance of the court completely.

If Trump wins the election and already has appointed his third Justice, further vacancies in a second term could allow him to push the conservative bias even further.

The Chief Justice of the United States John G. Roberts, Jr.; Neil M. Gorsuch, Brett M. Kavanaugh, Samuel A. Alito, Jr., and Clarence Thomas are the conservative leaning member of the court, although they haven’t always sided with Trump.

While conservatives are currently in the majority, the court has not always sided with Trump, including two major losses for the president this year.

In June, Trump erupted in fury after the Supreme Court dealt another blow to his efforts to undo Obama administration policies through regulation – comparing the rulings to ‘shotgun blasts’ at conservatives.

At that time, he made repeat references to his own reelection and demanded ‘NEW JUSTICES’ on the court, after Chief Justice John Roberts joined liberals to thwart the administration’s action.

The court had rejected his effort to end legal protections for 650,000 young immigrants, a stunning rebuke to the president in the midst of his reelection campaign.

The justices rejected administration arguments that the 8-year-old Deferred Action for Childhood Arrivals Program is illegal and that courts have no role to play in reviewing the decision to end DACA.

‘Do you get the impression that the Supreme Court doesn’t like me?’ the president asked his Twitter followers. 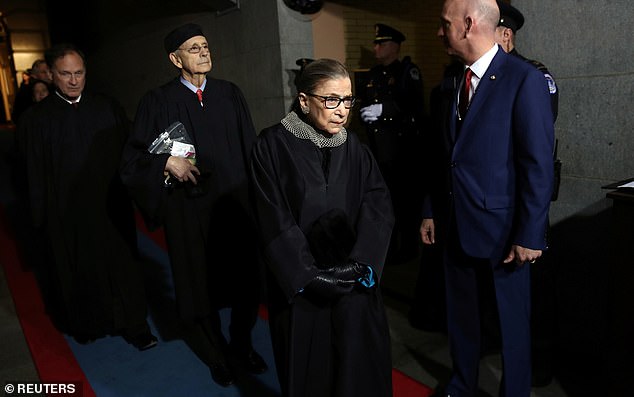 Trump also made a pitch for his reelection and trying to reshape the court.

‘These horrible & politically charged decisions coming out of the Supreme Court are shotgun blasts into the face of people that are proud to call themselves Republicans or Conservatives. We need more Justices or we will lose our 2nd. Amendment & everything else. Vote Trump 2020!’ he wrote.

It was second loss in a week coming after the 6-3 ruling written by Neil Gorsuch that gay and transgender people are protected from being fired by federal civil rights legislation.

In another setback for the president, the court decided not to take up a case a Trump Administration case challenging California’s ‘sanctuary city’ law.

The president now sees the Ginsburg vacancy as the chance to avoid any future defeats. by appointing an even more conservative voice than those already there.

Believed to be among the front runners to be chosen as Trump’s nominee is  U.S. Circuit Judge Amy Coney Barrett, 48, a devout Catholic who holds a strong pro-life stance.

Liberals fear her appointment would result in the removal of the Roe v Wade judgement that legalizes abortion nationwide.

COVID-19: Your personality influences how likely you are to stay at home during the pandemic

The death of the city vacation