Donald Trump apparently learned of the death of Justice Ruth Bader Ginsburg from reporters, after leaving a rally in Minnesota.

The president told reporters that he didn’t know Ginsburg had died when a reporter asked him for comment after his Minnesota rally Friday evening.

‘She just died? Wow. I didn’t know that, you’re telling me now for the first time,’ he said.

Ginsburg died aged 87 after a battle with metastatic pancreas cancer at her D.C .home.

Tributes have poured in from across the political spectrum for the veteran judged, with Joe Biden said she ‘stood for all of us’.

The White House lowered its flags to half staff and social media users pointed out that in Jewish tradition, a person who dies on Rosh Hashanah – which started tonight – is regarded as a person of great righteousness. 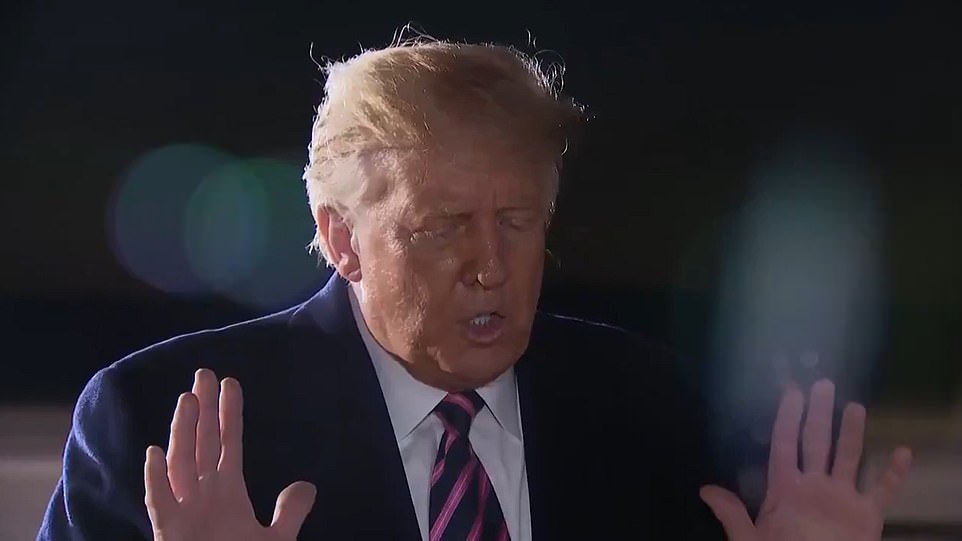 The president claimed he was unaware of her death after the rally finished, despite a supporter shouting out that Ginsburg had died during his rally 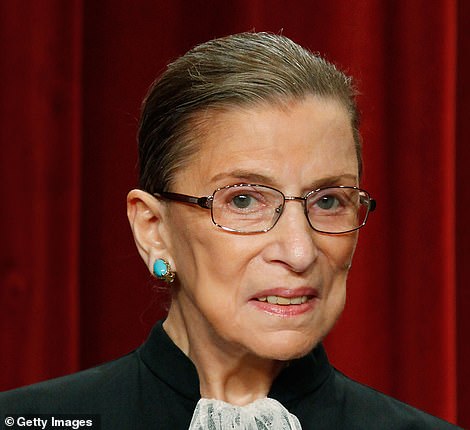 Trump was on stage when the Justice’s death was announced and carried on with his campaign rally apparently unaware of the news.

However while on stage – and moments after the Supreme Court announced her death – he reeled off his list of potential Supreme Court nominees for if and when a seat became available.

A supporter in the crowd shouted out that Ginsburg had died during his rally.

Meanwhile the White House flag was lowered to half staff and his Chief of Staff Mark Meadows tweeted a tribute to the ‘trailblazer’ and ‘dedicated public servant’.

When asked about her death by reporters, Trump said: ‘She just died? Wow. I didn’t know that, you’re telling me now for the first time.’

He then paused and held his hands in the air before paying tribute to Ginsburg – who he had a fraught relationship with since he moved in to the White House. 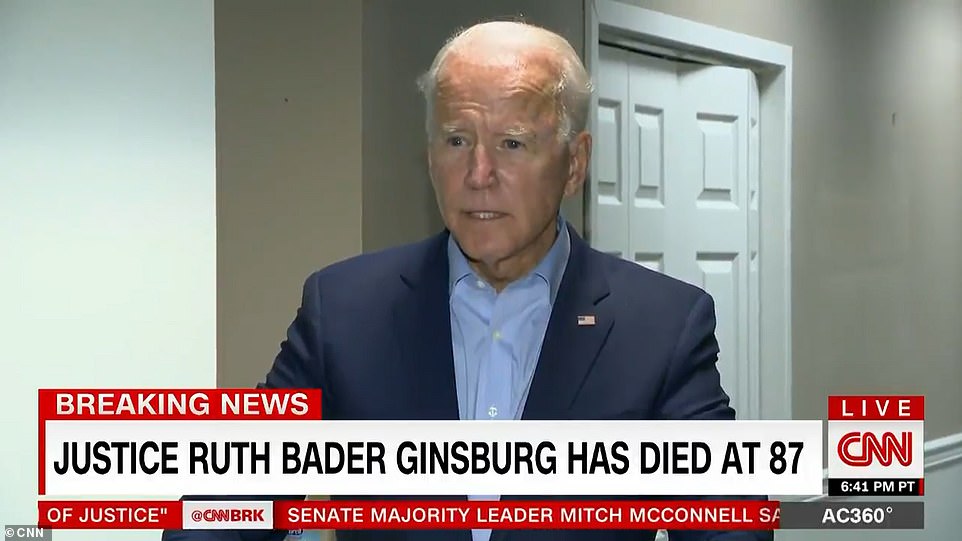 While Trump seemed oblivious to the news, his Democrat rival Joe Biden paid his respects to the legal pioneer and champion of equal rights. Biden called ‘not only a giant in the legal profession but a beloved figure’ who ‘stood for all of us’ in an interview on CNN 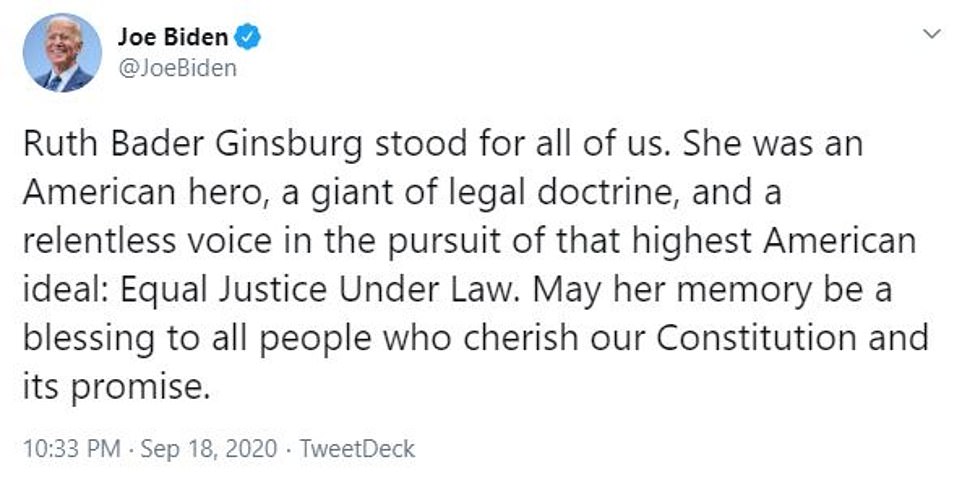 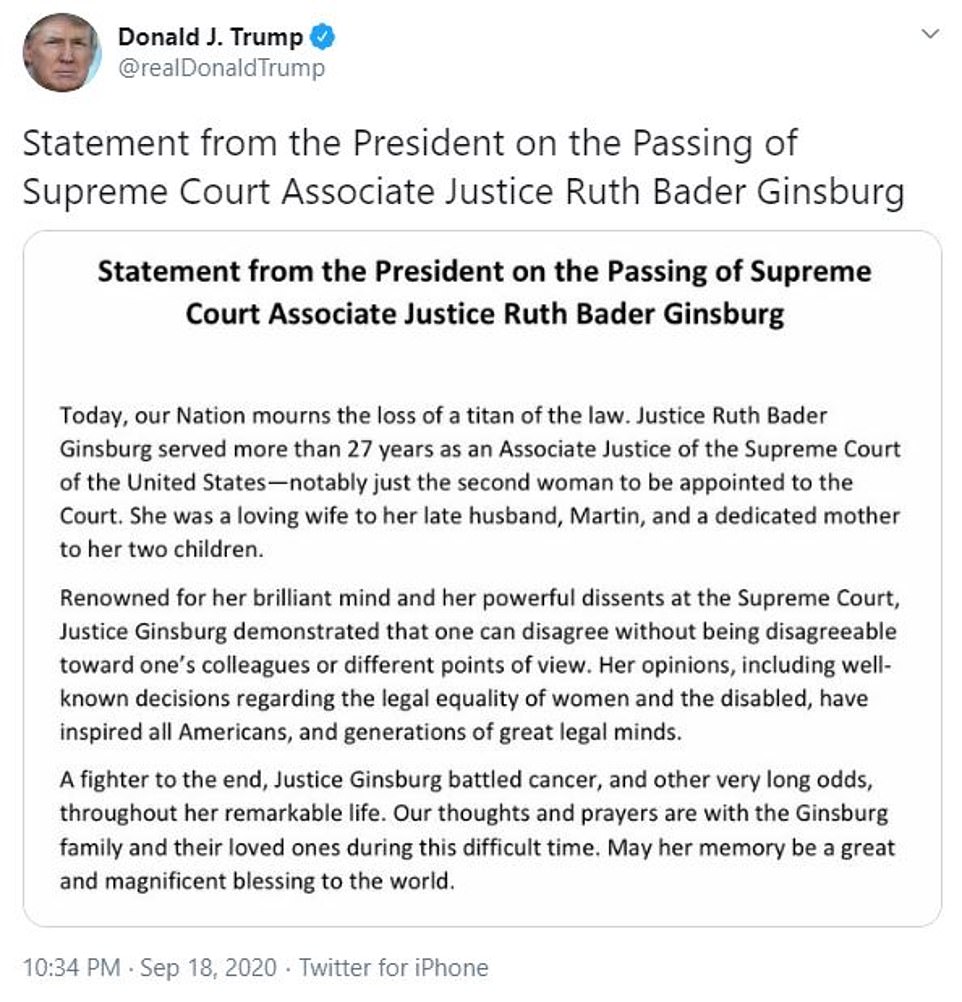 Soon after he tweeted a statement saying the ‘nation mourns the loss of a titan of the law’ and calling her a ‘fighter to the end.’

There was no mention of the next steps in appointing a successor.

There was no love lost between Trump and Ginsburg even before Trump entered the White House in 2016.

Ginsburg’s staunch criticism of the president earned her the nickname the Notorious RBG and made her a heroine among the left.

She branded him a ‘faker’ and said she could’t imagine what would happen if he became president.

Ginsburg, only the second woman to serve as a Supreme Court Justice, died Friday evening aged 87 after a battle with metastatic pancreas cancer, the Supreme Court announced.

The judge, who served for 27 years on the highest court of the land, passed away surrounded by her family at her home in Washington D.C. following complications after she has battled the disease on and off since 2009.

While Trump seemed oblivious to the news, his Democrat rival Joe Biden paid his respects to the legal pioneer and champion of equal rights.

Biden called ‘not only a giant in the legal profession but a beloved figure’ who ‘stood for all of us’ in an interview on CNN.

The presidential candidate insisted a new justice should not be chosen until after the election in November and said this was the process followed in 2016.

‘This was the position that the Republican Senate took in 2016 when there were almost 10 months to go.’ 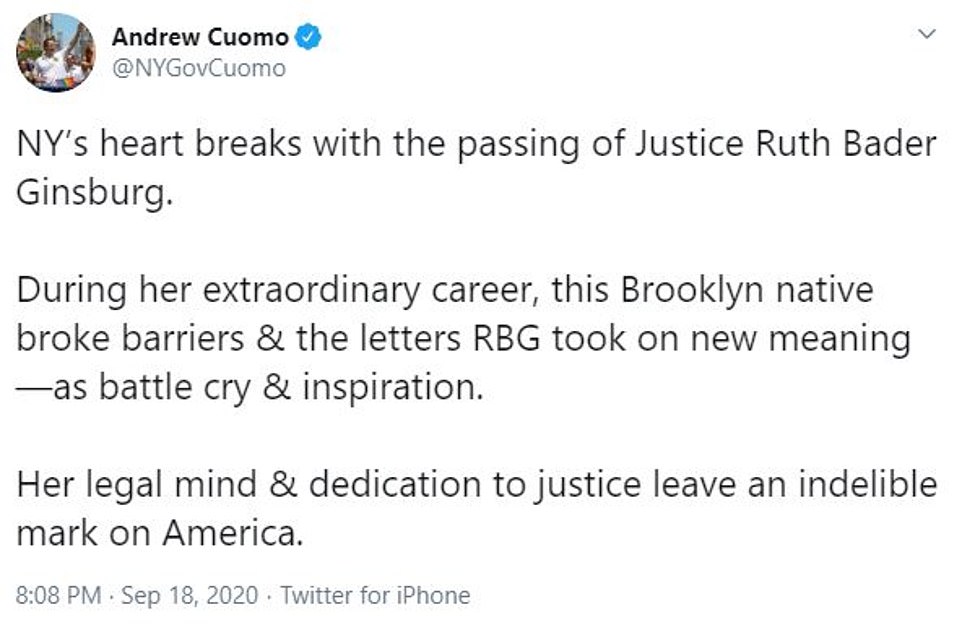 Chief Justice John Roberts led the tributes to his colleague Friday describing her as a ‘champion of justice’.

‘Our nation has lost a justice of historic stature,’ Roberts said in a statement.

‘We at the Supreme Court have lost a cherished colleague. Today we mourn but with confidence that future generations will remember Ruth Bader Ginsburg as we kne

Hillary Clinton tweeted that Ginsburg, a staunch advocate for women’s rights, paved the way for other women.

‘Justice Ginsburg paved the way for so many women, including me. There will never be another like her. Thank you RBG,’ Clinton wrote.

Bernie Sanders called her passing a ‘tremendous loss’ to America.

‘Justice Ruth Bader Ginsburg was one of the great justices in modern American history and her passing is a tremendous loss to our country,’ he tweeted.

‘She will be remembered as an extraordinary champion of justice and equal rights.’

‘Laura and I join our fellow Americans in mourning the loss of Ruth Bader Ginsburg. She dedicated many of her 87 remarkable years to the pursuit of justice and equality, and she inspired more than one generation of women and girls,’ he said.

‘Justice Ginsburg loved our country and the law. Laura and I are fortunate to have known this smart and humorous trailblazer, and we send our condolences to the Ginsburg family’. 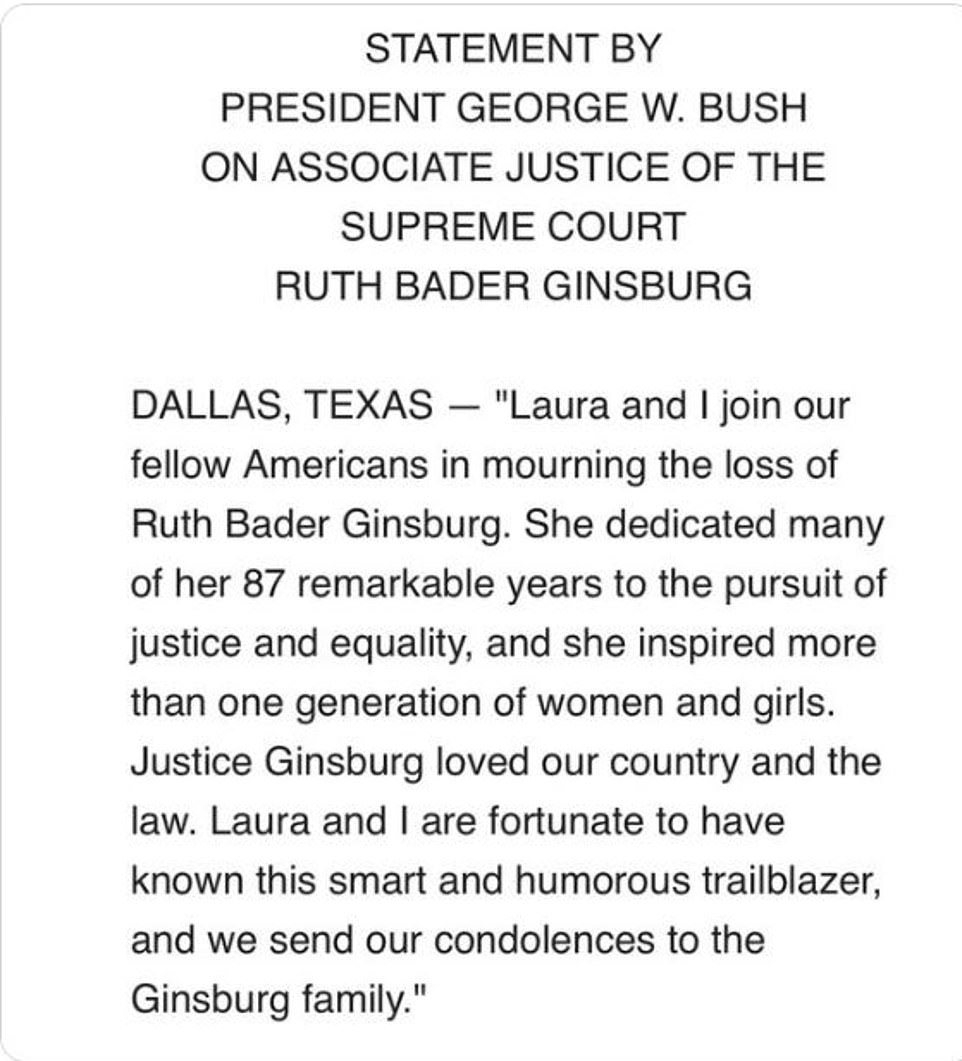 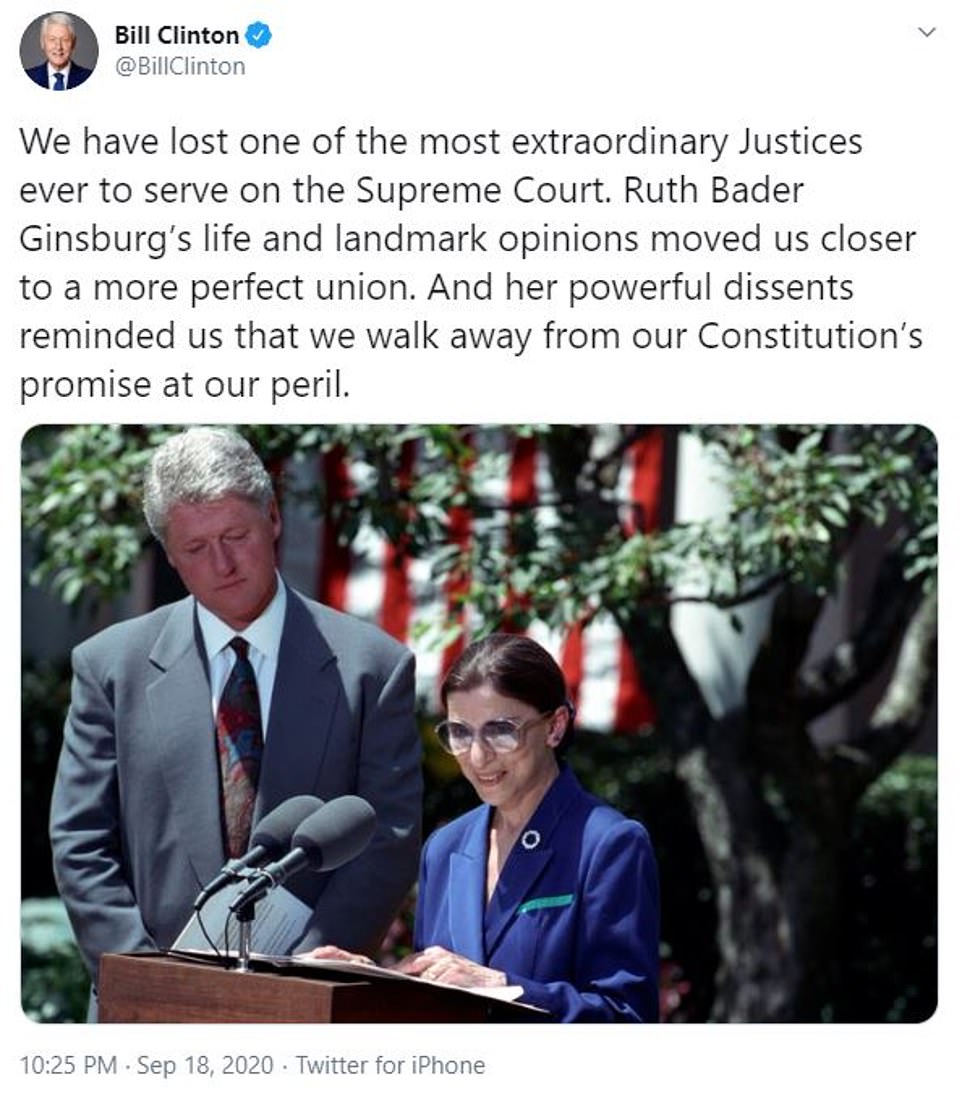 ‘Rosalynn and I are saddened by the passing of Justice Ruth Bader Ginsburg. A powerful legal mind and a staunch advocate for gender equality, she has been a beacon of justice during her long and remarkable career,’ he said in a statement.

‘I was proud to have appointed her to the U.S. Court of Appeals in 1980. We join countless Americans in mourning the loss of a truly great woman.

‘We will keep her family in our thoughts and prayers during this difficult time.’

Bill Clinton, who appointed Ginsburg to the Supreme Court during his White house tenure, also tweeted calling her ‘one of the most extraordinary Justices’.

‘We have lost one of the most extraordinary Justices ever to serve on the Supreme Court,’ he wrote.

‘Ruth Bader Ginsburg’s life and landmark opinions moved us closer to a more perfect union. And her powerful dissents reminded us that we walk away from our Constitution’s promise at our peril.’

New York Governor Andrew Cuomo spoke of the state’s heartbreak over the loss over one of its own. 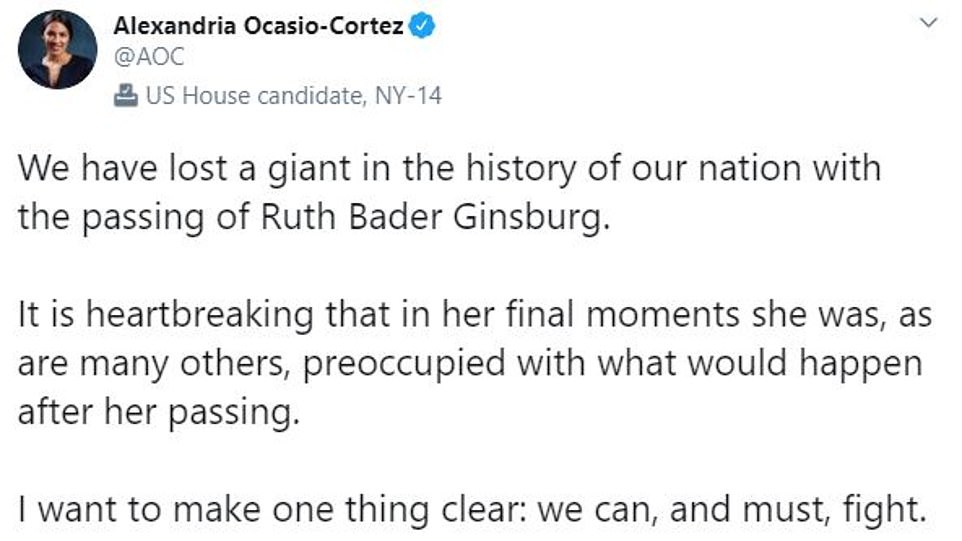 Washington Governor Jay Inslee, also a Democrat, described her as an ‘American hero’ and demanded that her ‘dying wish’ to not be replaced on the bench until after the election be respected.

He tweeted: ‘We have lost an American hero and a giant of justice.

‘May we honor Justice Ginsburg’s legacy by fighting for the civil rights of all Americans and respect her dying wish that she ‘will not be replaced until a new president is installed.”

His words were echoed by Senator Cory Booker who urged the nation to carry on ‘her legacy of fairness and equality’.

‘Ruth Bader Ginsburg was a true giant, an American hero and a warrior for justice,’ Booker tweeted.

‘Our country mourns her loss deeply—we must honor her by carrying on her legacy of fairness and equality.’ 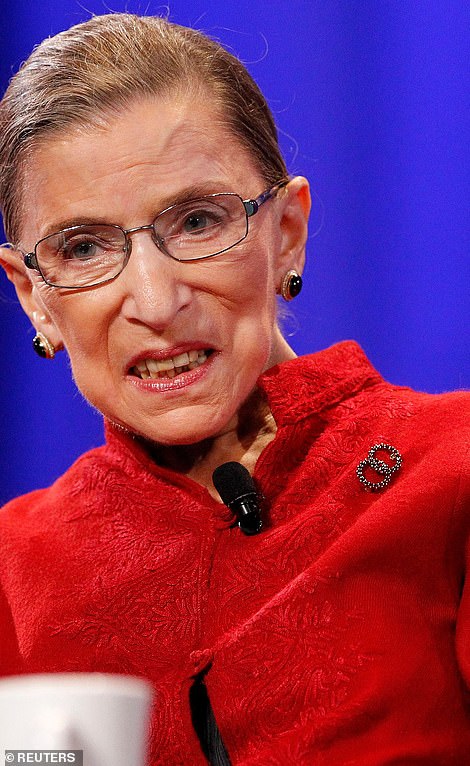 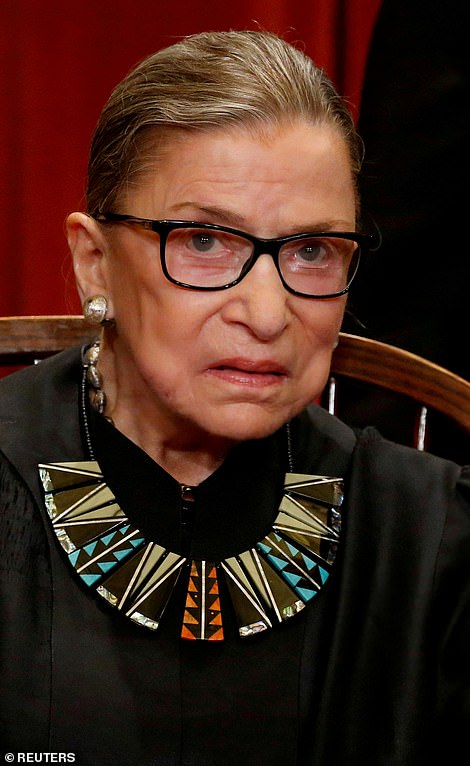 House Speaker Nancy Pelosi said flags over the Capitol would be flown at half staff in Ginsburg’s honor.

‘Tonight, the flags are flying at half staff over the Capitol to honor the patriotism of Justice Ruth Bader Ginsburg,’ she tweeted.

‘Every woman and girl, and therefore every family, in America has benefitted from her brilliance.’

Elizabeth Warren remembered her ‘friend’ for her ‘wit, her tenaciousness, and her skill as a jurist’.

Meanwhile AOC called her a ‘giant in the history of our nation’ and called on Americans to ‘fight’.

Tributes also poured in from those on the other side of the political spectrum.

Senator Lindsey Graham tweeted that he was filled with ‘great sadness’ at the news and that despite their ‘many differences’ he ‘appreciate[d] her service to our nation’.

‘It was with great sadness that I learned of the passing of Justice Ginsburg. Justice Ginsburg was a trailblazer who possessed tremendous passion for her causes. She served with honor and distinction as a member of the Supreme Court,’ he wrote. 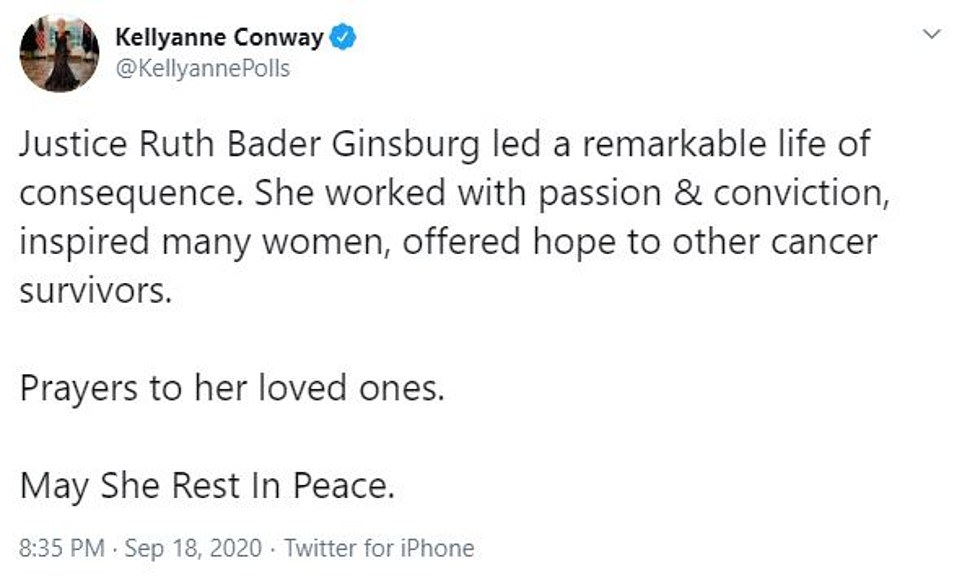 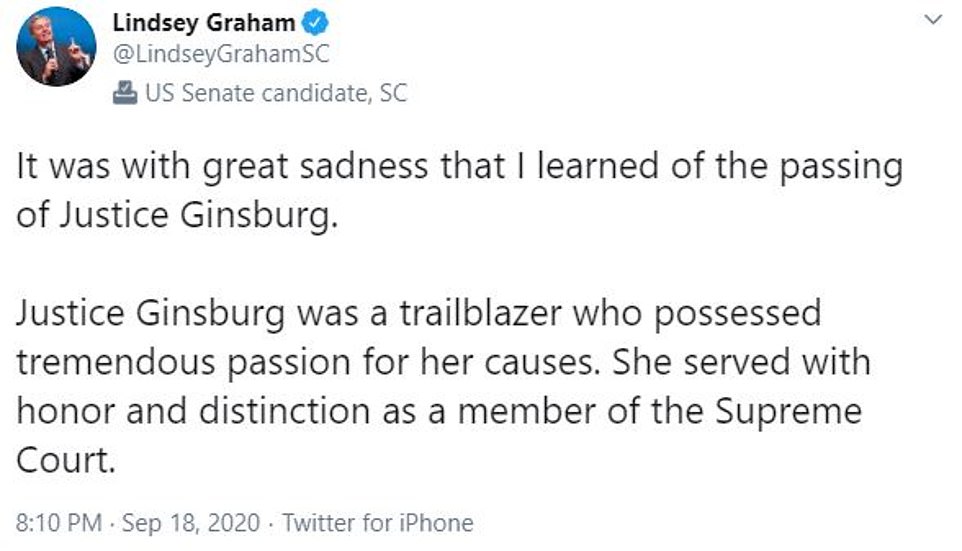 ‘While I had many differences with her on legal philosophy, I appreciate her service to our nation. My thoughts and prayers are with her family and friends. May she Rest In Peace.’

President Trump is yet to tweet about her passing however estranged niece Mary Trump urged Americans to continue her ‘fight for our country’.

‘Take a moment. Breathe. And then we fight for our country the way she always did for us. Or we will lose everything,’ she wrote on Twitter.

Ginsburg’s death gives Trump the opportunity to name her successor at a critical time just six weeks before the nation heads to the polls. 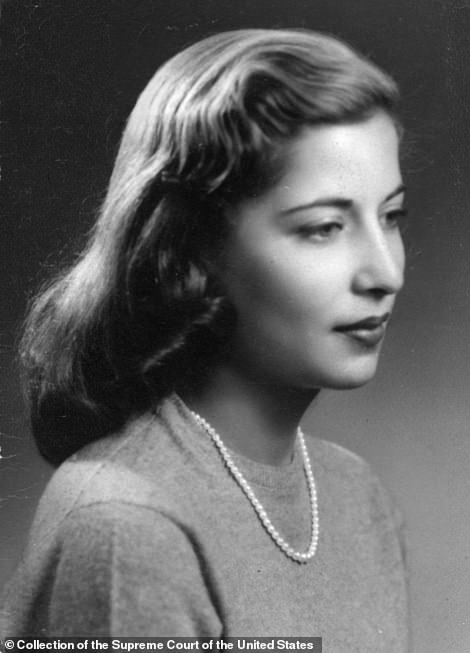 Ruth Bader Ginsburg in her engagement photo taken in December 1953

The president has already appointed two members of the Supreme Court, Justices Neil M. Gorsuch and Brett M. Kavanaugh, in a move that pushes the court increasingly right wing.

The replacement of Ginsburg, a Democrat and women’s rights champion, by another Republican will leave the court Democrats outnumbered, with six Republicans to their three.

A debate is expected to ensue over whether Trump should nominate her successor or leave the seat vacant until after the outcome of the election.

Senator Chuck Schumer tweeted Friday after the news broke of Ginsburg’s death that the position should not be filled until the White House race was over.

‘The American people should have a voice in the selection of their next Supreme Court Justice,’ he tweeted.

‘Therefore, this vacancy should not be filled until we have a new president.’

Senate Majority Leader Mitch McConnell issued a statement saying the Senate and nation mourns for Ginsburg alongside a statement where he said Trump’s nominee would be voted for by the Senate.

‘The Senate and the nation mourn the passing of Justice Ruth Bader Ginsburg and the conclusion of her extraordinary American life,’ he tweeted.

Ginsburg was appointed to the Supreme Court by President Clinton in 1993 and has served more than 27 years.

Trump declares himself 'immune' to Covid-19. His doctors won't say when he last tested negative.

Mother, 30, who disappeared in 1981 is identified as latest victim of serial killer Samuel Little